While Abbas Siddiqui's political entry has excited some young Muslims, many believe they should stick with the TMC because of the work Mamata has already done. 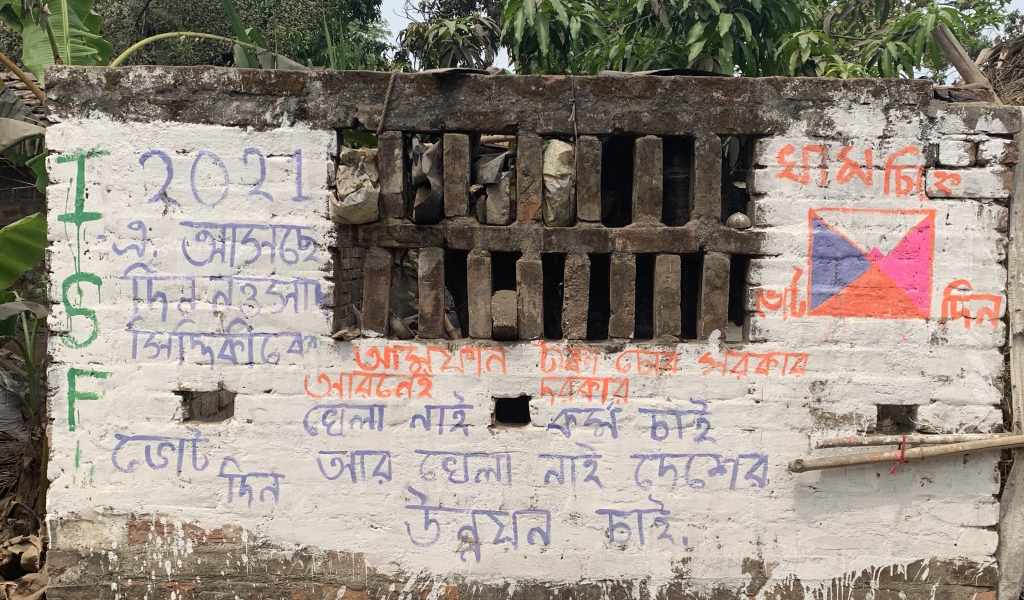 Slogans in support of the ISF and against rival parties, Ghaizpur, Bhangar. Photo: Radhika Bordia

Ghazipur village (South 24 Parganas, West Bengal): People in his village, Ghazipur, in South 24 Parganas are constantly seeking out Baddrudin Mullah’s opinion on various issues, including politics. His stature comes from the 14 years he spent studying Arabic at the high school madrasa run by Furfura Sharif, a reformist Sufi shrine in Hooghly, 45 km from Calcutta. “The mullah got added to my name when I returned after completing my education, earlier I was just called Badru.” 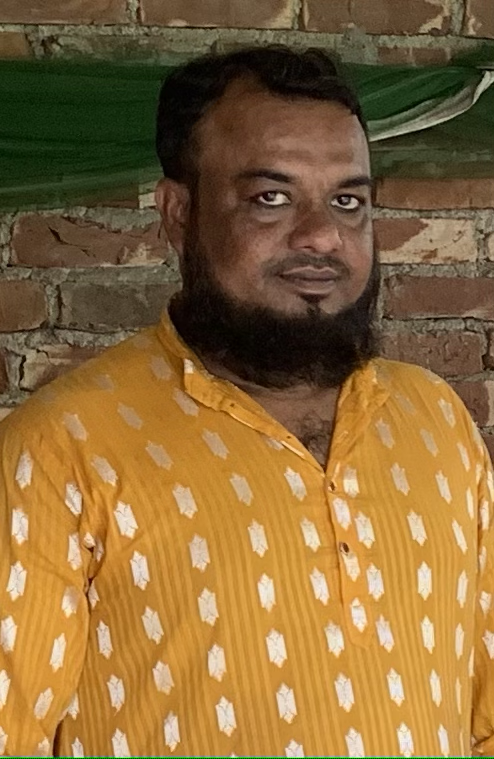 Almost everyone from Ghazipur has at some point visited Furfura Sharif, which is less than 50 km away. The shrine rose to prominence in the late 19th century, under Abu Bakr Siddiqui, venerated as a pir, hailed as an educationist, social reformer and religious leader. The shrine’s influence over Bengali Muslims spreads across the state and beyond, but is especially strong in the rural areas of South Bengal. The Furfura Fatehia senior high school and college that Badruddin attended was established by Abu Bakr.

This strong association with Furfura Sharif has thrown Baddrudin into a dilemma. He was all set to vote for Mamata Banerjee until March 19, when Naushad Siddiqui was declared the Indian Secular Front’s (ISF’s) candidate from Bhangar, Baddrudin’s assembly constituency. “Pirzada Naushad is Abbas’s brother and I call Abbas ‘Bhaijaan’, so I feel I must vote for him.”

When 35-year-old Abbas Siddiqui launched the ISF, in January, it instantly catapulted him to centre-stage in Bengal’s politics. A great grandson of Abu Bakr Siddiqui, this decision also brought the internal politics of Furfura Sharif into focus – a story of feuds over property and a clash of personal ambitions. Abbas has frequently mentioned how he once supported Mamata but now feels “betrayed”. His uncle, Toha Siddique, another important cleric at Furfura Sharif, a Mamata loyalist, had criticised his nephew for breaking away, accusing him of furthering his personal ambitions.

Abbas’s decision has once again opened up questions about how Muslims will vote in this election. In the face of the rising presence of the Bharatiya Janata Party (BJP), it had been assumed that the vote would consolidate behind the Trinamool Congress (TMC), but questions began to be raised when it became clear that the religious appeal of Furfura Sharif would work in alliance with the CPI(M)-Left combine. 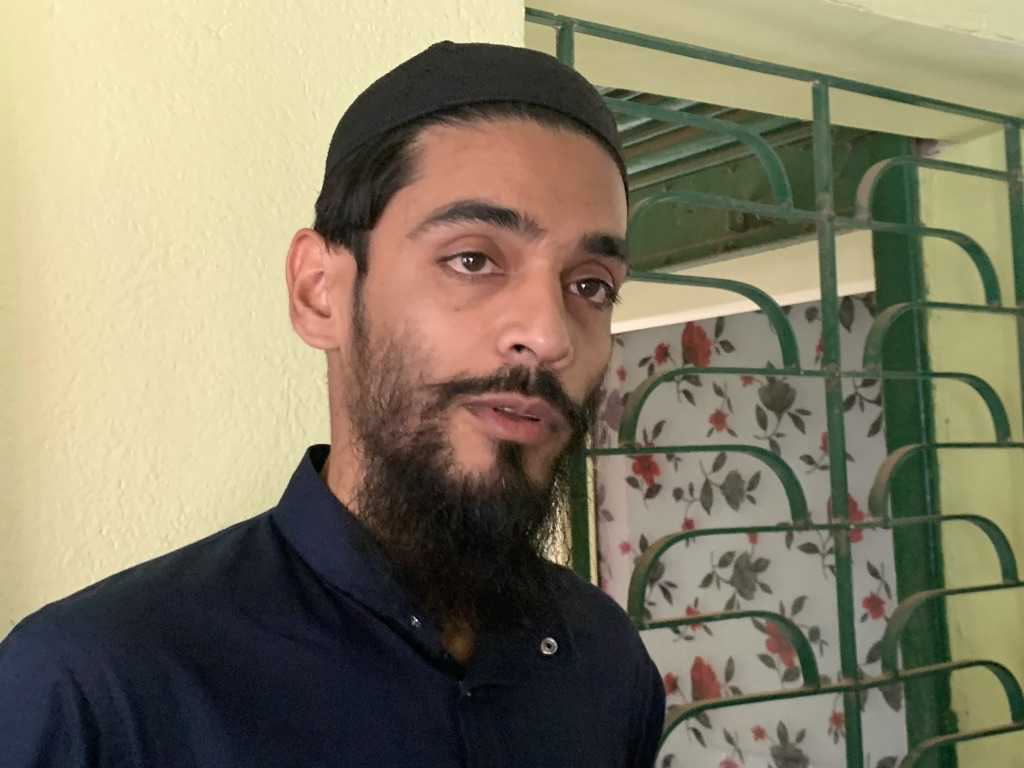 Bhangar, Naushad’s constituency which is polling today (Saturday), will be a definitive test of the impact of his party in this election. In the 2019 Lok Sabha elections, the TMC led comfortably from Bhangar, mainly because of the consolidation of Muslim votes against the BJP – but at that point Abbas Siddiqui was not a political factor.

Abbas’s entry into politics has forced him to play down some of his early regressive and controversial comments, such as the ones made against the TMC MP Nusrat Jahan. Criticising her for visiting temples, he threatened to tie her to a tree and thrash her if he ever came to power. In interviews given after entering politics he has said he has changed and “that Abbas was of a different ideology”.

He has since focused on reaching out to those who follow him as a pir and appealing to the youth who seem more enthused by his entry into politics. He was in talks with Asaduddin Owaisi early on, and Owaisi had even come and spend at night at Furfura Sharif, but Naushad refuses to detail the discussions, claiming the visit was purely ‘devotional’. Owaisi has since announced his decision to contest seven seats on his own.

Abbas had also sought an alliance with the TMC, before becoming part of the “Sanjukta Morcha”, with the Congress and Left parties. Despite Furfura Sharif’s immense religious appeal, voters in the constituency are acutely aware of the logic of the vote. Baddruddin feels that a vote for the ISF would simply be about a personal connection but in the larger context it is important for Muslims to vote the TMC to ensure no “votes are cut”.

Baddruddin’s father-in-law,  Sahaji, has no such conflict. In his mid 60s, Sahaji is a respected figure in the village. The last six months have been tough for the family, with most of the earning members losing their jobs due to COVID-19 lockdowns. Then came the cyclone Amphan. South 24 Parganas was among the more severely impacted regions. Two of the homes in their family compound, built with thatched roofs, caved in.

While the TMC has been criticised for not responding adequately to the disaster, the criticism here is far more muted, with most expressing satisfaction with the relief work.

For Sahaji, the single most important issue in the election is that Muslims are facing an existential threat. “When it is in power, the BJP has shown what it can do to Muslims. That is the only thing we have to remember in these elections.” An avid reader of Bengali newspapers Anandabazar Patrika and Bartaman, Badruddin often leads the political discussions in his village, “I’ve told my family and my friends at the mosque that it is important to vote for Didi.”

Also read: The Making of Khwaabgaon: How an Idyllic Village in Bengal Became an Artist’s Canvas

Till the 2016 elections he had been voting for the CPI(M), and when he is asked whether  their alliance with the pirzada makes them a viable option again, he returns to his earlier point with greater emphasis, “This is not the time to try out options. I have seen people discuss what will happen to the Muslim vote in every election. Earlier, people would analyse whether the Muslim vote would go to the CPI (M) or the Congress, then it became CPI(M) or the TMC, now it is TMC or ISF. Let the outsiders discuss this, we know what we need to do.”

Sahaji’s house is situated near the main road, at the head of the village. His terrace overlooks a pond, a mosque and the lane that leads deeper into the rest of the village. “You see that new mosque? Some BJP person had come to Polerhaat (a market near the village) and was telling the Hindu families that under Mamata, Muslims are constructing mosques everywhere. Who will tell them about the temple in our village that has been recently refurbished?” 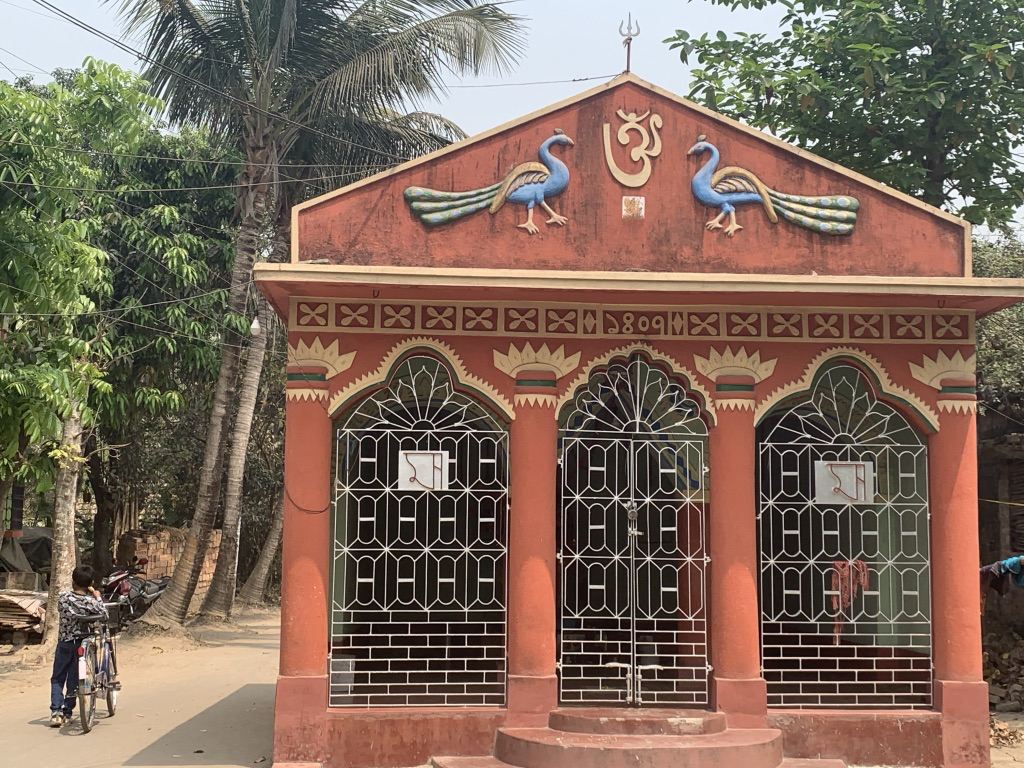 Impatient with the flow of the conversation, Sahaji’s younger son, Naharul interrupts to say he’s thinking of voting for Naushad Siddiqui. He thinks Naushad is young and can meet the aspirations of the youth. The same hardships his father had described push Naushad to seek other options. “I heard Bhaijaan speak recently and he said that Didi is constantly saying ‘Muslim, Muslim’ but doesn’t do anything substantial for Muslims. There is some truth in this,” says Naharul.

This is the ISF’s main criticism of the TMC – that Mamata’s Muslim politics has done more damage to the community. By making “appeasement” an issue, the ISF claims, the TMC has played into the hands of the BJP.

We had met Naushad Siddiqui at his residence in Furfura Sahib shortly after his candidature from Bhangar had been announced. Only 29 years old, he was thronged by his followers and finally spoke to us in an office room where he could have some privacy. Two of the books on the desk lie facing us, one a biography of Abu Bakr Siddiqui in Bengali and the other in English titled The Secular Vision of Kazi Nazrul Islam, as he made two well-practiced points with several elaborations.

One against the BJP was evident and consisted of a few lines – “the BJP is not an anti-Muslim party, it is an anti-national one”. In contrast, he stated, that the ISF is building a secular coalition. “We have Dalit and Adivasi candidates as our attempt is to work for the backward sections of society.”

He then returned to the main thrust of the ISF campaign, attacking the TMC. Ignoring the fact that his brother had sought to ally with the party before the elections, he said that Mamata’s Muslims politics was about an optics intended to exploit the Muslim vote. “Have you seen the Sachar Committee Report? Have you seen the abysmal state of Muslims in Bengal, it is the worst. Mamata has done nothing to change it.”

These points may have resonance with some of the younger voters but they run into problems with others who point out that Naushad’s party is in alliance with the very people who were in a position to do something for Muslims over decades.

“Why doesn’t Naushad ask his hammer and sickle friends why the Muslims have not got any development,” says Saribal Mullah from Ghazipur,  who sells a few groceries from a small one-room shop in and also gives the azaan from the local mosque. “A certain percentage of votes will go to Abbas’s party but those who will think and vote will stay with Mamata. She has also got roads built here and ensured we have some electricity.” 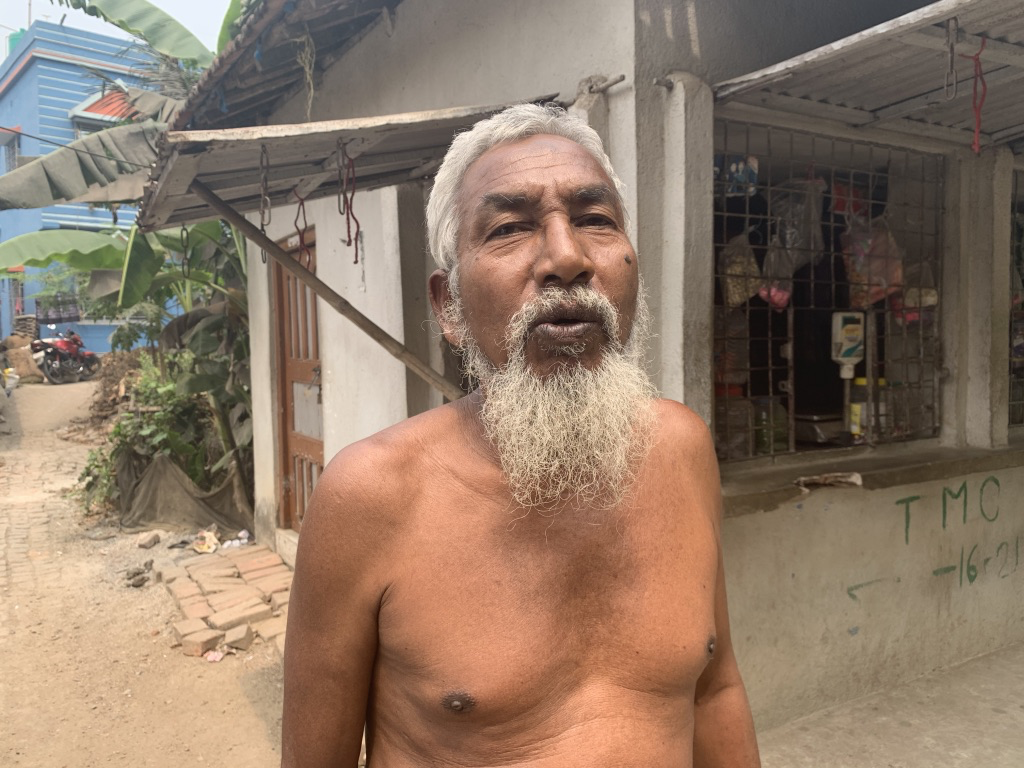 Naseema and Safia, two women, both in their early 50s, arrive at the shop to buy a few groceries. They have complaints against the TMC but pledge their support to Mamata as they feel she’s familiar and a safer choice. “We have full respect for the men of Furfura Sharif but most of their followers seem to be boys my age, I’m not sure what they’ll achieve.” 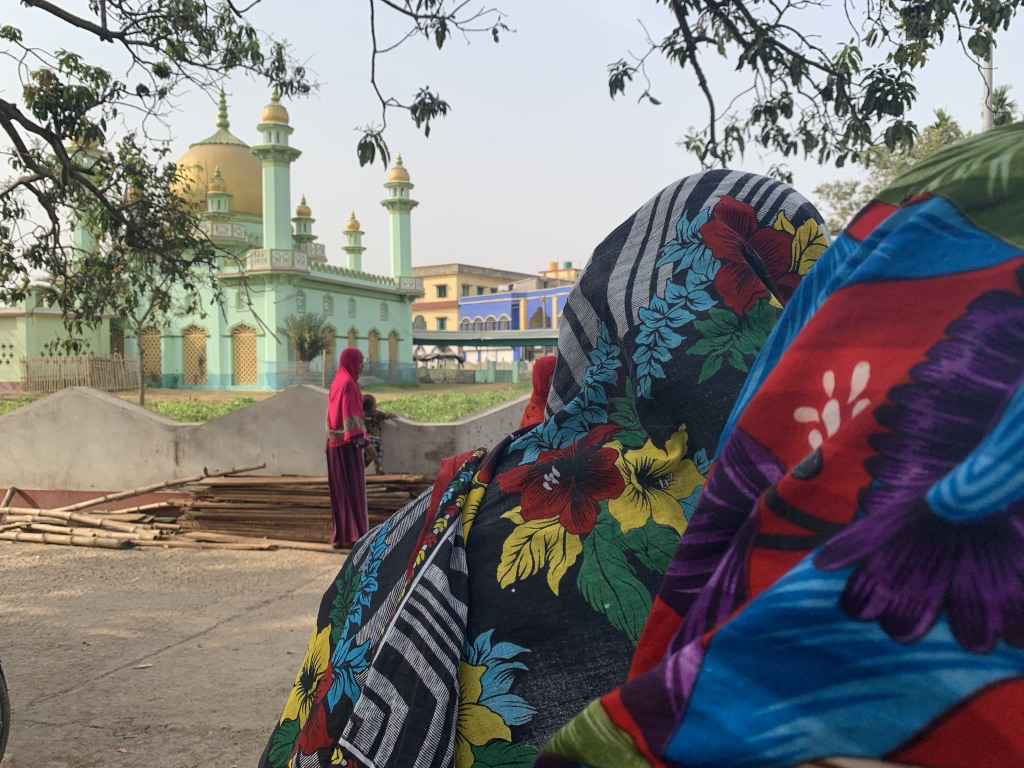 Several reports on the ISF have suggested its appeal is greater among Muslim youth, restless for change and looking for strong Muslim leadership in an increasingly polarised and hostile world. Yet, even in Bhangar, where Abbas Siddiqui’s politics first took root and where his own brother is a candidate, one does not sense any overwhelming surge of support for the ISF.

In Ghazipur’s small Hindu locality, there is little sign of any counter polarisation that the BJP may bank upon in such villages. Sita Das is quick to affirm her vote for Mamata, “There is talk about the BJP, that it is a Hindu party, and I am a Hindu but so far the BJP has not done any work here. Whether they will work in the future who knows so I prefer to vote for Mamata.”

Sita lists what she considers important work done for the village – a road, cleaner surroundings and cycles for the girls so that they can ride to the high school nearby. Returning to the topic of the BJP she says “aami phool ta jaani, log ta jaani na (I know the flower but I don’t know their people)”.