We May Not Like the Choices We Have, But Vote We Must

There is political space for a genuinely centrist liberal political party that economically and socially liberal, but until such a party emerges, one cannot remain passive or indifferent and wallow in cynicism. 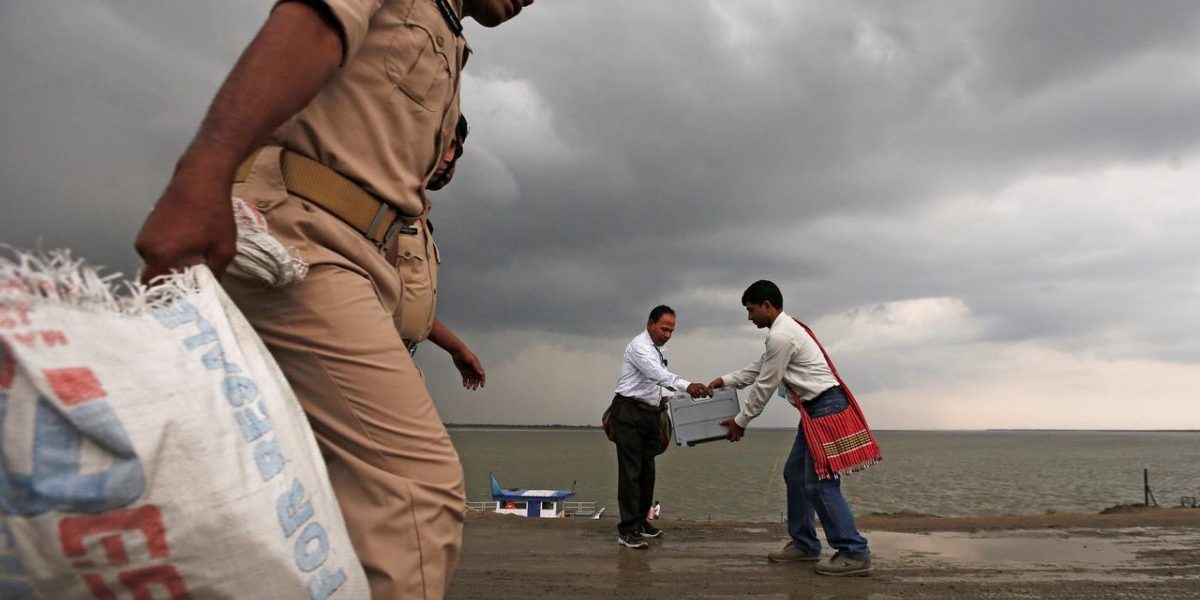 Polling officers hold an electronic voting machine (EVM) as a security personnel walks past after arriving on a ferryboat in Nimatighat, Jorhat district, in the northeastern Indian state of Assam, April 9, 2019. REUTERS/Adnan Abidi

At election time, when ordinary people realise the party they voted for has not delivered on any of its previous promises, they do the only thing they can and are adept at. Without despair but with healthy skepticism, robust enthusiasm and uncanny insight, they usually, ruthlessly boot out the incumbent party and give an opportunity to the next party they think should get a chance to rule.

But the elite, most of whom are cynical and have not been exercising their franchise but are keen to participate in the elections of late, one question bothers them which they are unable to resolve: Who do they vote for when all parties seem venal and no politician inspires confidence? Unable to answer this question, many withdraw from exercising their vote.

At a recent gathering, a noted Gandhian and a widely respected former diplomat and author was asked by some young people who crowded around him after his speech what his views were on the present political situation, which is so toxic and vitiated. Especially with elections around the corner and social as well as mainstream media distorting reality, captive to one or the other party or ideology. What was his advice to the people? How should they vote when they are confused and caught between parties and political leaders who do not present much choice? He responded with a sad but bewildered expression: “We are caught between monsters on the one side and morons on the other!”

Pressed further, he mused, thinking aloud: “Yes that’s the dilemma. What do we do? All parties are corrupt though there are individuals who are exceptions. While one party divides society on religious lines and imposes its blinkered views of Indian culture and nationalism on the rest, and the other parties play caste and Dalit and vote bank politics, it’s not an easy choice. But one cannot and must not abdicate one’s responsibility. Everyone must exercise one’s judgment as objectively and dispassionately as possible and weigh the options and then vote and choose the better candidate among those in the field in the given circumstance, when the parties in the field do not inspire confidence. A candidate who comes across as decent, honest, respects diverse views, cultures and religions and castes, must get your vote.”

Someone countered, “What happens if you detest one party and what it stands for but the candidate contesting is a decent guy. And in the other party, the lesser of the evils , the contestant is a lumpen criminal?”

Pat came his reply: “Then, in my opinion you ought to chose the party that treats everyone equally, regardless of their caste, creed or ideological persuasion. The corrupt criminal will likely be subsumed by the party’s overarching ethos. But it’s unlikely that an individually honest candidate will be effective in a party that discriminates and does not view everyone as equal under the law or tramples on the constitution. The party ideology will devour him. Finally, all forms of authoritarian rule of the Right or the Left must be shunned.”

Indian politics has evolved over the past seven decades into largely a two party system at the Centre – one, the BJP, that is perceived as ‘rightist’ in its economic policy as well as in its religious outlook and credentials, and with an overt tilt toward a majoritarian politics, and the other, the Congress, which is viewed more as ‘left of centre’ in its economic policies and widely seen as pro-Dalit and pro-minority but accused of practising vote bank politics to secure their votes, with sham concerns for the alleviation of their problems, and ‘hobbled by dynastic or high command politics’.

While the BJP is charged with being led by a Hindu chauvinist authoritarian leader, the Congress during UPA-2 was also accused of anointing a pliant and puppet prime minister remotely controlled by the party president surrounded by her coterie.

There are also many regional parties, and they are all commandeered by leaders with a provincial outlook and are brazenly casteist, almost all of them very autocratic and tyrannical in their own way, idiosyncratic, personality driven, megalomaniac, and blinded by filial ties with loyalty to their family members taking precedence over party or state interests and all intolerant of any kind of dissent or criticism from the media. These parties generally slip in and out of bed with ease, with whichever party that is in power, and switch loyalties either to BJP or Congress without any qualms as the situation changes. They are gaining in strength by the day with an iron grip on their flock, reducing both BJP and Congress to irrelevance in their own respective states and have a growing impact in recent times, in tilting the balance of power.

The Congress party was viewed generally as a truly secular, liberal party in the larger sense of the word under Nehru’s leadership, with socialist leanings and was seen to be genuinely concerned with the uplift of the poor of all sections of society. Some may argue, of course, that it erred in its adoption of leftist economic policies and snuffed out free enterprise.

There was a brief spell during P.V. Narasimha Rao’s regime when he ushered in bold and swift economic reforms, and again during UPA-1 and during the Vajpayee era who continued those liberal policies both economic and social, but both the parties eventually, in the name of socialism and improving the economic conditions of the poor disregarded the financial stability of the country by offering massive subsidies, 80% of which never reached the intended beneficiaries.

Whatever their manifestos may have proclaimed, both parties practised crony socialism, on the one hand, keeping alive moribund public sector undertakings and massive subsidies which gave them power and pelf through access to public resources and allowed them to dip their hands into the public till. At the same time, in the name of the free market, these parties created a parallel economy with crony capitalists who influenced government policy and stifled competition to benefit themselves.

The sudden rise of the BJP’s rabid, communal and divisive politics and the resultant fear psychosis among minorities has shaken the roots of the country. It was to be expected. There’s a lesson from recent history  for both parties to heed from the way the masses have voted. The moment they sense intuitively that there’s communal disharmony leading to instability either through extremes of pro-minority vote bank politics or majoritarianism and the encouragement of hate politics, they wisely throw the party out. Above all, they want peace, communal harmony and stability. Without that, there can be no economic prosperity.

If the two mainstream national parties of India do not change their politics, it is unlikely that they can turn India into a developed country on the lines of the welfare-state democracies of Europe. The independence of many of our institutions – the CAG, CBI , AGs (who are increasingly becoming poodles of the government, forgetting their constitutional obligations), the bureaucracy, the police (who are hand maidens of state governments) and the  judiciary must be protected and strengthened. This independence has been abused not just by the present government but even during the UPA era. New rules must be framed to protect freedom of the press from not only the government but also big corporates.

In such a scenario, there is political space for a genuinely centrist liberal political party, neither leaning to the left nor to the right – a new liberal party that promotes both economic liberalism and social liberalism. But until such a party emerges, one cannot remain passive or indifferent and wallow in cynicism. We must go out and cast our vote. Abdicating the responsibility to shape our destiny will be to our own peril.