The enemy is BJP's debilitating complacency – that corroding corruption, crippling incompetence and the conceit of the clever. 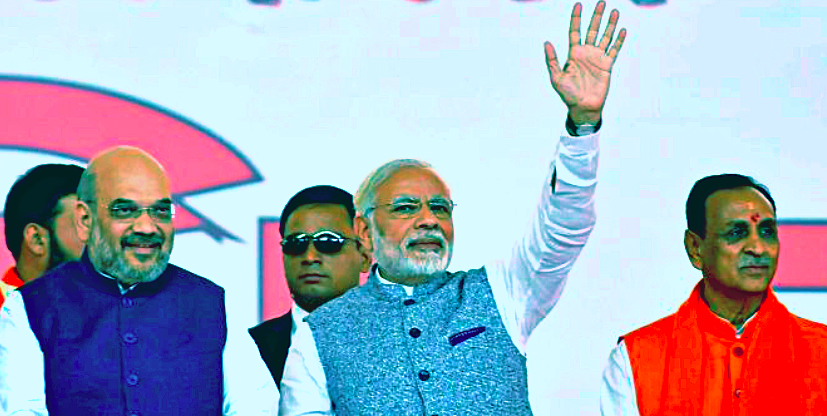 A recent visitor to Ahmedabad could not fail to notice the conspicuously displayed billboards, resplendent with the familiar visage of our honourable prime minister, announcing the imminent “public dedication” by him of “Sardardham.”

The online ceremony took place on Saturday, September 11. Sardardham is a parking place for the Pattidars. An extremely imposing statute of Sardar Patel lends an aura to an otherwise indifferently designed building. Sardardham is meant to provide anchorage to the global Pattidar community.

It is a part of the BJP politics of appeasement, meant to assuage the feelings of the powerful Patel community, once its core since the Jana Sangh days but which now feels taken for granted ever since the Narendra Modi-led BJP has overdone its courtship of the OBC.

The very “sardar” whom the BJP had propped up opportunistically in its unceasing battle with Nehru’s memory and achievements now stands reduced to a caste leader. The very shrewd practitioners of very smart politics – routinely serenaded by the Delhi-based media as modern-day Chankayas – will not easily let the Patels walk away.

The same visitor to Ahmedabad last week could not help admiring an eight-column banner headline in a local Gujarati newspaper, announcing achievement of an astounding landmark of 5,00,00,000 vaccinations in the state. And, for good measure, within each figure of zero was mentioned a socially-cherished value: Health, Prosperity, Happiness, Trust, Peace, Hopefulness, and Security.

A typical example of a compromised and complicit media at work, hailing the Rupani government’s handling of the COVID-19 pandemic.

Crores and crores of tax-payers’ money has been spent on hailing the achievements of Vijay Rupani’s stewardship, under the able and inspiring guidance of the two gentlemen who lord over Raisina Hill. The vendors of “exclusive” news have now whispered in our ears that the BJP “high command” was deeply disappointed with the Rupani administration’s lacklustre performance all these years. The people of Gujarat deserve better and the good lords and masters would give us a brand new chief minister.

The crux of the matter is that as chief minister, Vijay Rupani was never more than a glorified clerk. While his photograph did get printed in the government-sponsored advertisements, real decision-making power and initiative rested with retired bureaucrats, reporting directly to the Two Big Bosses in Delhi. Even the district collectors were encouraged to communicate “urgent” matters straight to the functionaries of the Delhi Durbar. At no point all these years there was any indication that as chief minister, Vijay Rupani was unwilling to be guided, tutored and commanded even in the smallest of decisions, political or administrative; and, yet, it this poor, hapless man who is being made to walk the plank.

Vijay Rupani’s departure from the chief minister’s bungalow in Gandhinagar is yet another confirmation of the utter bogusness of the “double engine” argument the BJP advances in non-BJP states. Gujarat has patently not benefitted from the same party ruling in the state and at the Centre. On the contrary, there is a deterioration in every walk of life in Gujarat – notwithstanding the fact that after two decades of uninterrupted BJP sway over Gandhinagar there is not a single arena of organised activity that is beyond its control or manipulation.

The BJP is indeed the master of all it surveys in Gujarat. There is no Congress opposition, now that Ahmed Patel is dead and buried in a distant Bharuch kabiristan. As long as “Ahmed Bhai” was around he was the compass for the “idea of Congress.” Today the Congress is a euphemism for a bunch of highly individualistic, self-destructively competitive, and thoroughly uninspiring leaders; and, the Congress central leadership remains, as ever, clueless as how to storm back to power in a state that was lost three decades ago.

Nor can the BJP complain of any “resistance” from another potential source of opposition: the sizeable Muslim community. Since the horrible 2002 riots the Muslims have been shown their place, and they in turn have been content to bide their time. Not just from the political arena, the Muslims have been effectively disfranchised from most walks of organised public life.

Indeed, the BJP’s dominance in Gujarat is total and complete. With the possible exception of a handful of Gandhian institutions, the entire civil society has been tamed and de-fanged. Universities, student unions, kisan organisations, chambers of commerce, caste associations, religious sects, sports bodies, various cooperatives, even the criminal sector have been successfully penetrated, manipulated, and taken over; and, of course, the police and other tools of coercion are readily available to be used for advancing the BJP interests and electoral fortunes.

And yet what explains this massive sense of unease that only a change of chief ministerial guard can ensure a win in the assembly elections next year?

It can perhaps be charitably inferred that the Big Two Bosses do know the fakeness of the much-vaunted Gujarat model. The Delhi-based media may not want to remember it, but the two “chanakyas” can be relied upon not to forget that even last time around the BJP failed to cross the 100 mark; the voters in Gujarat, in 2017, had put paid to the “Mission 150” dream.

May be the Big Two Bosses do know that the poor, marginalised, the Adivasis, the Harijans and the other minorities remain untouched by the glittering success of the Adanis and the Ambanis. May be they also know that perhaps it will be an uphill task to scare the Hindus; after two decades of political and social dominance ,the Hindu triumphalism is total and absolute, at least in Gujarat.

Yet, it cannot be acknowledged that the enemy is within. And, the enemy is a debilitating complacency – that corroding corruption, crippling incompetence and the conceit of the clever. Gujarat is ideally ready for parivartan.

So, the central dilemma: how to trick the electorate into giving the BJP another five years in Gandhinagar? The Gujarat voter has seen through the exaggerated claims of good governance, over the top assertions of deshbhakti, and a massive surfeit of populist-welfare schemes. Hence, the need for a new poster boy. The tall talk of a “New India” has degenerated into a sleight of hand.