Could Venkaiah Naidu Have Served the BJP Well as Presidential Candidate?

Like Droupadi Murmu, Venkaiah Naidu would have ticked several boxes and helped the prospects of the BJP in the southern states. 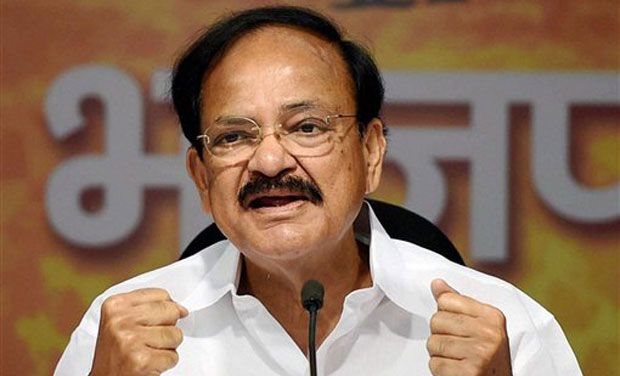 Vijayawada: With the announcement of Droupadi Murmu as the presidential candidate of the Bharatiya Janata Party (BJP)-led ruling National Democratic Alliance, vice-president M. Venkaiah Naidu has missed the bus. The veteran Andhra Pradesh leader’s name did the rounds initially, before the BJP leadership zeroed in on Murmu.

Many believe Naidu, an old-timer of the BJP, could have been an ideal candidate to become the president given his long career in politics, his positioning as a southern face in national politics, his friendly ties cutting across party lines, his immense experience in governance and also his command over multiple languages. However, the trusted lieutenant of Atal Bihari Vajpayee and L.K. Advani has failed to enjoy the same favour under Narendra Modi and Amit Shah, who heralded a generational shift in the party.

Also read: For BJP, the Optics of Nominating the First Tribal Woman President Couldn’t Be Better

Although he was made vice-president in 2017, after a long career in active politics, it is still seen by many – both in the BJP and outside – as removing an old-timer from the way of the Modi-Shah duo – under whom the BJP has completely transformed itself where the two alone call the shots.

Venkaiah Naidu (73), a hardcore karyakarta (worker) of the Rashtriya Swayam Sevak Sangh (RSS), gradually rose up through the ranks of the BJP. He became the southern face of a party that largely has its base in north India.

From severing as a student leader of the BJP’s student wing, Akhil Bharatiya Vidyarthi Parishad (ABVP), he went to occupy the position as the national president of his party between 2002 and 2004. After the defeat of the BJP-led NDA in the 2004 general elections, he resigned from his party post to be succeeded by L.K. Advani. He also served as Union rural development minister under the Atal Bihari Vajpayee government. He held various portfolios during the first term of the Modi government.

He was elected as the 15th vice-president of India in 2017. With his puns and one-liners, Naidu had won friends and foes across the political spectrum, which was on full display during his stint as a parliamentary affairs minister (2014-16).

When Naidu was serving as Union minister and party national president in the early 2000s, the prospect of Modi, who was then the chief minister of Gujarat, arriving on the national scene was remote.

In the party, Naidu is seen as a link between the old generation represented by Vajpayee and Advani and the latest one represented by Modi and Shah. Many believe, as a diehard Advani loyalist, his upward political career took a hit with the generational shift within his party

Naidu’s admirers feel he reluctantly quit active politics in 2017 and accepted the vice-presidential role following a decision from the party’s top brass.

Within Andhra Pradesh, Naidu came under criticism – even within the BJP – that the party played second fiddle to the Telugu Desam Party under his leadership and could not grow.

The BJP, for long, piggybacked on the TDP in the Telugu state. When the TDP ditched it – for going back on its promise to grant special status to Andhra Pradesh – before the 2019 general elections, the BJP fared poorly in that election and continues to struggle to create a political space for itself.

While social engineering appears to have worked in the favour of Murmu, choosing Naidu could have helped the BJP to address the growing perception of the south-north divide in the country’s polity and ensure its growth prospects in the southern states.

Of the 15 presidents the country has seen so far, only six of them came from the south of India. Two of them – Neelam Sanjiva Reddy (1977-82) and V.V. Giri (1969-74) – hailed from Telugu states. Sarvepalli Radhakrishnan, who served as the second president (1962-67), was born in Tamil Nadu’s Tiruthani. Yet, Radhakrishnan was a Telugu man who wrote the foreword to Suravaram Pratapa Reddy’s book titled Hinduvula Pandagalu, recollects Chandrasekhar Kalkura, a scholar from Andhra Pradesh’s Kurnool, in a conversation with The Wire.

“Venkaiah Naidu, with his exemplary track record as one of the best parliamentarians and oratorical skills in multiple languages in Telugu, Kannada, Tamil, English and Hindi, would have been a good choice to be the next president of India,” feels Kalkura.

His candidature might have kindle the sentiment of Telugus’ self-pride to the BJP’s advantage, even disarming Modi’s bitter critics like K. Chandrasekhar Rao of the Telangana Rashtra Samithi (TRS) in Telangana and the TDP’s Chandrababu Naidu.

In keeping with the son-of-the-soil sentiment, TDP founder N.T. Rama Rao had allowed P.V. Narasimha Rao, the Congress prime minister then, to be elected unopposed in the by-election in the Nandyal Lok Sabha seat by not fielding his party’s candidate in 1991.

The BJP under the leadership of Modi and Shah has been struggling to realise its Mission-7 – to expand in Assam, West Bengal, Odisha, Telangana, Andhra Pradesh, Tamil Nadu and Kerala.

Regional parties hold sway in Andhra Pradesh, Telangana and Tamil Nadu while the Left front is in ruling in Kerala.

“The BJP could have sent a message to the south had Venkaiah Naidu’s candidature been considered by his party to be the president,” Ramu Manivannan, a former professor from Madras University, tells The Wire.

“South-north divide is visible politically and demographically as well for long. It needs to be addressed for the healthy development of the country,” adds Manivannan.