Running the second Vande Bharat train on a route that will benefit pilgrims to the Vaishno Devi temple marks a synchronisation of Hindu aspiration with national development. 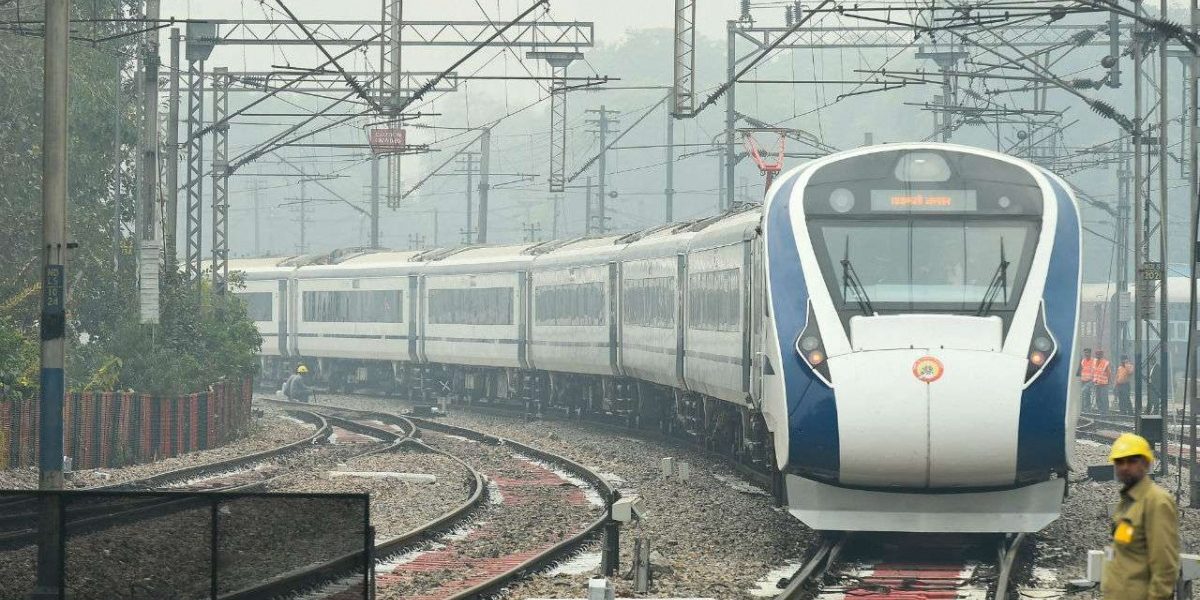 Last week, news surfaced that Indian Railways’ new showpiece, Vande Bharat Express, will soon run on the Delhi-Katra route. Because this is the nearest railway station to the Vaishno Devi shrine, the train will obviously come as a boon to pilgrims who can afford to travel in upscale, air-conditioned comfort. This would be the second five-days a week Vande Bharat train, after the one that plies between New Delhi and Varanasi, or as mentioned at its launch by Prime Minister Narendra Modi on February 15, between Yamuna-nagri and Ganga-nagri.

Although it went unnoticed during the train’s christening in January and launch in the immediate backdrop of the Pulwama terror attack, the decision to unveil the prestigious Train 18 project on a route flush with Hindu spiritual heritage and the name zeroed in for it, marked the regime’s efforts to bolster its narrative of cultural nationalism.

Running the second Vande Bharat train on a route that will benefit relatively more affluent Hindu pilgrims marks a neat synchronisation of Hindu aspiration with national development. Furthermore, it cannot be ignored that the train’s name draws on a national emblem which has been a bone of contention periodically between champions of unitary or mono-strand nationalism and those advocating a more integrationist or multi-stranded view of nation and nationhood.

‘Vande Mataram’ as a song and slogan

In an indication of divergences on the issue, the selection of India’s National Anthem was left for January 24, 1950, the last day of the Constituent Assembly and just before the Constitution came into force. It was announced by Rajendra Prasad as presiding officer of the assembly that ‘Jana Gana Mana’ would be the National Anthem and that “the song ‘Vande Mataram’, which has played a historic part in the struggle for Indian freedom, shall be honoured equally with ‘Jana Gana Mana’ and shall have equal status with it.”

Certainly, there was a significant section of India’s lawmakers, and people, who felt that Bankimchandra Chattopadhyay’s composition, despite its association with the national movement, did not universally appeal to all sections of the Indian social mosaic. Although it was accorded the same prominence as Tagore’s composition, there was no doubt that this was merely a compromise, effected because those advocating ‘Vande Mataram’ as the official anthem could not be disregarded totally. The decision was representative of the delicate balancing act in a nation that chose to follow a more embracing path than the seclusionist character chosen by Pakistan.

In time, the use of ‘Vande Mataram’ in official functions declined, with the exception being parliament, where it is sung on the final day of every session. The song also stopped being a political slogan as the Congress and most opposition parties used more inclusive slogans, be it ‘Jai Hind’ or the more radical ‘Inquilab Zindabad’. For the majority of people who grew up in the 60s or the 70s, ‘Vande Mataram’ denoted a Hindu spirit which was not completely integrationist in a nation where the Constitution gave non-Hindus equal rights, including not being forced to accept symbols which they felt undermined their faith. Yet, those who had ‘problems’ with ‘Vande Mataram’ made no effort to dislodge it from the exalted position in India’s iconography. 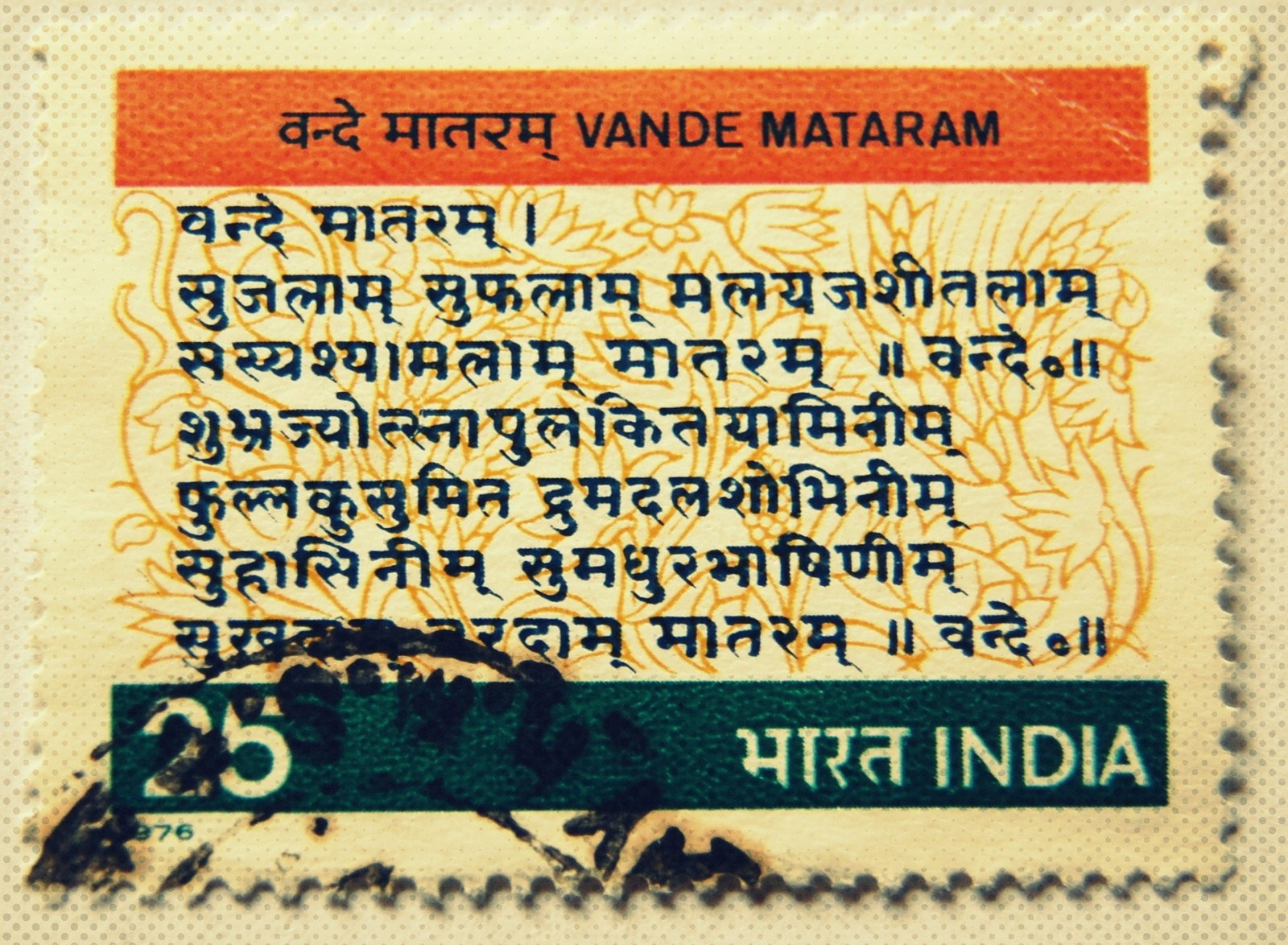 Lyrics to ‘Vande Mataram’ on a stamp.

The BJP and the Hindutva project

For the BJP however, especially after the advent of Modi at its helm, ‘Vande Mataram’ evolved into a war cry, a chant that defines the party’s – and other affiliates of the Sangh parivar – view of nationalism. The two words are shouted on every occasion, chiefly to serve a reminder that there is a section of Indians who are reticent of ‘Vande Mataram’ as a national emblem and as a unifying slogan. The restoration of Bankimchandra’s verse has thus become a Hindutva project and no opportunity is let go to create a controversy whenever someone expresses disinclination to sing or shout the two words as a rallying sound. Shut your eyes and the slogan will resound in your ears: ‘Hindustan mein rehna hoga, to Vande Mataram kehna hoga‘ (If you want to live in Hindustan, saying Vande Mataram is obligatory).

The nation as motherland is a universal sentiment. But in India, Hindu nationalist thought, even before formation of the RSS in 1925, personified the nation as a Hindu goddess – Bharat Mata. Every recitation of the organisation’s prayer in Sanskrit ends with Bharat Mata Ki Jai shouted in unison. In time, the goddess got physical representation and was often presented as the protecting force of “Akhand Bharat”.

In 1983, around the time when religion began getting completely intertwined with politics, partly due to Indira Gandhi’s encouragement of politically mobilising Hindus on the basis of religious identity and also as result of the RSS-backed VHP agitation for the Ram temple in Ayodhya, a Bharat Mata temple was inaugurated in Haridwar. It is located at a fair distance from Har Ki Pauri, the most important religious location in this important Hindu pilgrimage centre.

Also Read: Who is the Mata in Bharat Mata?

The temple became a tourist centre and people gawked at the idol of Bharat Mata, replete with a milk urn in one hand, a sheave of grain in another. A signboard which evokes the tricolour with the use of its signature colours, has ‘Vande Bharat Mataram’ written on it. The narrative provided at the temple connects Bharat Mata with ‘Vande Mataram’, and with the idol framed against a large representation of India with its mountains, rivers and significantly, other important Hindu pilgrimage centres, the centrality of these in India is established.

Bharat Mata as the protecting force of “Akhand Bharat”.

Trains and their names

In the colonial era, trains were given names that made it easy to identify the route – Grand Trunk Express, Frontier Mail, Punjab Mail etc. Post-independence, most trains were given names that were easy to identify Chambal Express, Bundelkhand Express, Charminar Express etc. Many names have defied logic. Bibek Debroy, who has written a fair bit on railway history, observed that there was “scope for research on why some trains have such names”. (Katra-Chennai train known as Andaman Express? Why is a train to Secunderabad called Bhagyanagar Express?)

Prior to Vande Bharat, path breaking trains were given contemporary names. In 1969, the Rajdhani Express became the first fully air conditioned train. Almost two decades later, in 1988, Shatabdi Express became the first air-conditioned chair-car high-speed train that completed to-and-fro journey from a city on the same day. While the first train got its name became it connected major metros to Delhi, the latter was so named when Rajiv Gandhi had initiated a conversation around preparing India for the 21st century.

While naming these trains – metaphors of modernisation – the Indian Railways or the government did not fall back on symbolism drawn from the past. Instead they used names which were completely integrationist.

In contrast, the Vande Bharat Express is drawn from a narrower view of nationalism on which there has been a historical contestation. Such nomenclature reflects the political orientation of the Centre and underscores that even a train name can be used to send a political message or bolster a certain perspective on the nation. There is nothing wrong in this name – after all, Article 1(1) of the Constitution begins with “India that is Bharat…”and ‘Vande Mataram’ retains its exalted position. Yet, there is no argument against recognising the purpose behind the exercise.

In his speech before flagging off the inaugural Delhi-Varanasi train in February, Modi presented it as a symbol of Indian capacity and argued that development is a bulwark against terrorism. He also used the word “kaamgaar“, integral in his political campaign, to describe workers of the Integral Coach Factory, Chennai where the train was developed and built. In time, the Vande Bharat Express may be run between destinations which are not Hindu-centric. But by then, a part of the political objective would have been achieved.

Nilanjan Mukhopadhyay is a Delhi-based writer and journalist. He tweets @NilanjanUdwin