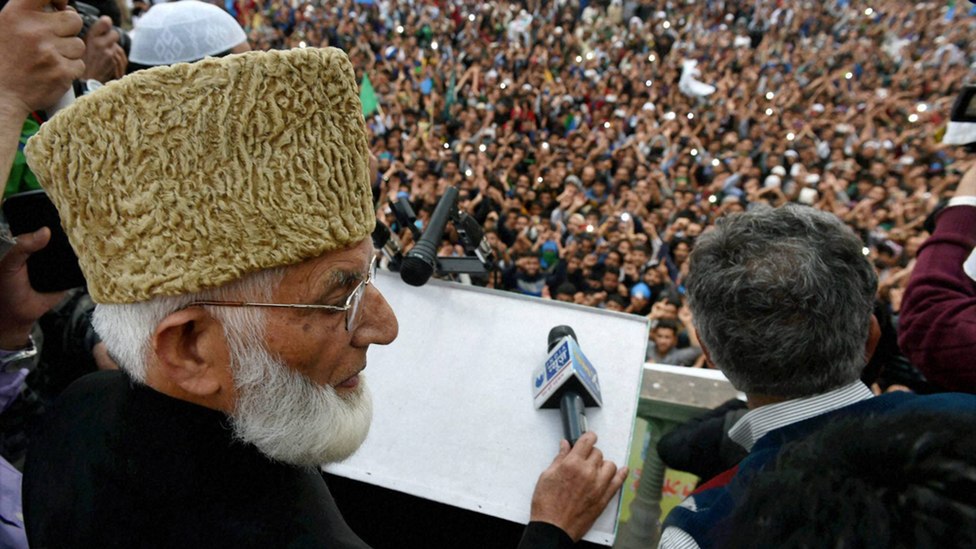 Srinagar: Riled by the Pakistani government’s plans to declare Gilgit-Baltistan a fifth province of the country, separatists in the Kashmir Valley have warned Islamabad to desist from embarking on any “adventure” that could impact Kashmir’s “disputed status”.

Although Gilgit-Baltistan – formerly known as the Northern Areas and a part of the erstwhile princely state of Jammu and Kashmir – has been under Pakistan’s control since 1947, the country’s government has always treated the region as part of the disputed area of J&K.

“Any proposal to declare Gilgit-Baltistan as the fifth province of Pakistan is unacceptable as it tantamount to changing the disputed nature of Kashmir,” the powerful separatist leaders, Syed Ali Shah Geelani, Mirwaiz Umar Farooq and Muhammad Yasin Malik, cautioned Islamabad in a joint statement on March 17.

The trio – who led last year’s five-month long pro-freedom uprising – have argued that since Jammu and Kashmir’s political destiny remains undecided in accordance with the UN resolution on the matter, any proposal which deviates from Pakistan’s “original stance” on Kashmir and its geographical entity is “improper and would prove detrimental for [the] Kashmir cause”. “We hail the role of Pakistan regarding the Kashmir issue in international fora but no deviation, alternation and changes were acceptable unless people of erstwhile J&K get an opportunity to decide the future course of the state through a referendum. Neither India nor Pakistan have any authority or right to alter geographical status of the state,” the separatist leaders said.

On the same day that the separatists cautioned Pakistan, United Jihad Council chief and Hizbul Mujahideen supremo Syed Salahuddin also warned Islamabad. “Pakistan should stop the process of making Gilgit-Baltistan its fifth province. Such an act will have serious ramifications on the Kashmir issue as well as Kashmir-centric UN resolutions,” Salahuddin said in a statement to a Srinagar-based local news agency.

In 2014, a similar proposal by the country’s federal ministry of Kashmir  and Gilgit-Baltistan affairs was criticised by residents of divided Kashmir across the Line of Control. On that occasion, in addition to the separatists’ opposition, the Pakistan-occupied Kashmir (PoK) assembly also passed a resolution opposing the granting of provincial status to Gilgit-Baltistan. “Making Gilgit-Baltistan a fifth province will weaken Pakistan’s national stand on Jammu and Kashmir at the international level,” said the resolution. And added, “Whenever a plebiscite is conducted the people of G-B will also have the right to decide their future with the people of other parts of the State of Jammu and Kashmir”.

According to political analyst Ashiq Hussain, Gilgit-Baltistan was incorporated into Jammu and Kashmir by the Dogras – whose rule lasted a century – in 1846. In 1949, after the Kashmir issue went to the United Nations, Pakistan inked the Karachi agreement under which it was agreed that the affairs of the region would be run by the government of Pakistan under a separate federal ministry of Kashmir Affairs and Northern Areas, said Hussain. Islamabad, however, continued to treat the region as part of disputed Kashmir and a separate geographical entity.

In 2009, while the name Northern Areas was replaced with Gilgit-Baltistan, Islamabad allowed the region to elect its own government with a chief minister as its executive head and the federally-appointed governor as the constitutional head. Though the region has its own regional assembly, the ministry of Kashmir Affairs and Northern Areas continues to be the real power centre in the region.

The plan and the cause

On March 15, Pakistan’s minister for inter-provincial coordination, Riaz Hussain Pirzada, told Geo TV that a committee headed by Pakistan’s foreign affairs advisor Sartaj Aziz had proposed giving provincial status to Gilgit-Baltistan. He said that a constitutional amendment would be made to change the region’s status. Gilgit-Baltistan is the entry-point to the $46 billion China-Pakistan Economic Corridor (CPEC) and recent media reports have implied that Beijing’s concerns about the region’s disputed status have prompted Islamabad to make the move and provide legal cover to the CPEC.

“Beijing, in its search for securitising China’s western territories, has invested hugely in Gilgit-Baltistan. It wants to protect that investment and so has pressured Islamabad to declare Gilgit-Baltistan a province in order to weaken Delhi’s objections to its claims over the disputed state,” political analyst Siddiq Wahid told The Wire.

But the separatists are not alone in their opposition to the change in the status. New Delhi was, in fact, the first to criticise Pakistan. Although it took an entirely different stand. “…The entire state of Jammu and Kashmir acceded to India in 1947. It has been, is and will always be an integral part of India. A part of J&K has been under illegal occupation of Pakistan. Any unilateral step by Pakistan to alter the status of that part will have no basis in law and will be completely unacceptable,” said Gopal Baglay, spokesperson for the Ministry of External Affairs.

Wahid argued that while the sincerity of New Delhi’s objections would be determined by what it was willing to do to protect its claims to that territory, the proposed provincial status to the region would “considerably weaken” Islamabad’s claims vis-à-vis the disputed status of J&K. In the long run, the confrontation that this development could bring about could cost South Asia and the world dearly, said Wahid. “Either that, or there is an unspoken understanding between Delhi and Islamabad to compromise and further complicate the dispute over our state. And as for J&K, our helplessness in articulating objections that matter is proof of how alone we are in making a difference in the ideological and territorial holy wars that real or pretentious powers fight,” he said.

“For decades we have been reiterating the disputed status of Kashmir. If Pakistan goes ahead with its plans, it will justify India’s position on this part of Kashmir,” said a senior separatist from the Mirwaiz group.