The Supreme Court put its stamp of approval on yesterday's Uttarakhand assembly floor test, confirming that the Congress government won with 33 of the 61 votes. 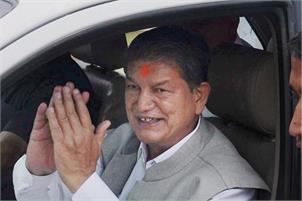 New Delhi/Dehradun: Congress leader Harish Rawat is all set to be reinstated as chief minister of Uttarakhand, over six weeks after he was ousted by the Centre, with the Supreme Court today putting its stamp of approval on the floor test in the state assembly yesterday.

“Rawat gets 33 votes out of 61 in the floor test. No irregularities were found in the voting. Nine MLAs could not vote due to their disqualification,” an apex court bench said and directed the revocation of President’s rule so that Rawat can assume office.

Celebrations broke out in Dehradun the moment the news trickled in that Rawat had won the trial of strength held in the assembly yesterday.

The developments have come as a major loss of face for the Modi government at the Centre, which had dismissed the Congress government and imposed President’s rule after nine Congress MLAs sided with the BJP on the Appropriation Bill.

The rebel MLAs were subsequently disqualified by the speaker under the anti-defection law, a decision that was upheld by the high court and the Supreme Court.

The bench comprising Justices Dipak Misra and Shiva Kirti Singh made the pronouncement today after perusing the records filed by the principal secretary (legislative and parliamentary affairs).

At the outset, Attorney General Mukul Rohatgi conceded that there is no doubt that Rawat had proved his majority. “It is clear that respondent number one (Harish Rawat) has proved the majority on the floor of the house. I have received instructions from the Centre on the issue. The instructions are that the Centre will revoke president’s rule,” Rohatgi told the bench.

It, however, held that the justifiability of the proclamation of President’s rule made on March 28, which has been assailed by the high court, will remain alive as it is under challenge before the apex court.

It also noted that the nine disqualified MLAs have challenged the high court order and the matter is of debate. “We do not say anything on that,” the bench said.

An ecstatic Congress vice-president Rahul Gandhi said that democracy has won and he hoped that the prime minister will “learn the lesson”.

“They (BJP) did their worst. We did our best. Democracy won in Uttarakhand. Hope the PM learns the lesson that people of India and institutions built by our founding fathers will not tolerate murder of democracy,” Gandhi said on Twitter.