Will Priyanka Gandhi's Biggest Political Gamble So Far Pay Off?

By announcing 40% of the tickets for women, Gandhi has virtually signalled that the Congress party will fight in a large number of seats. 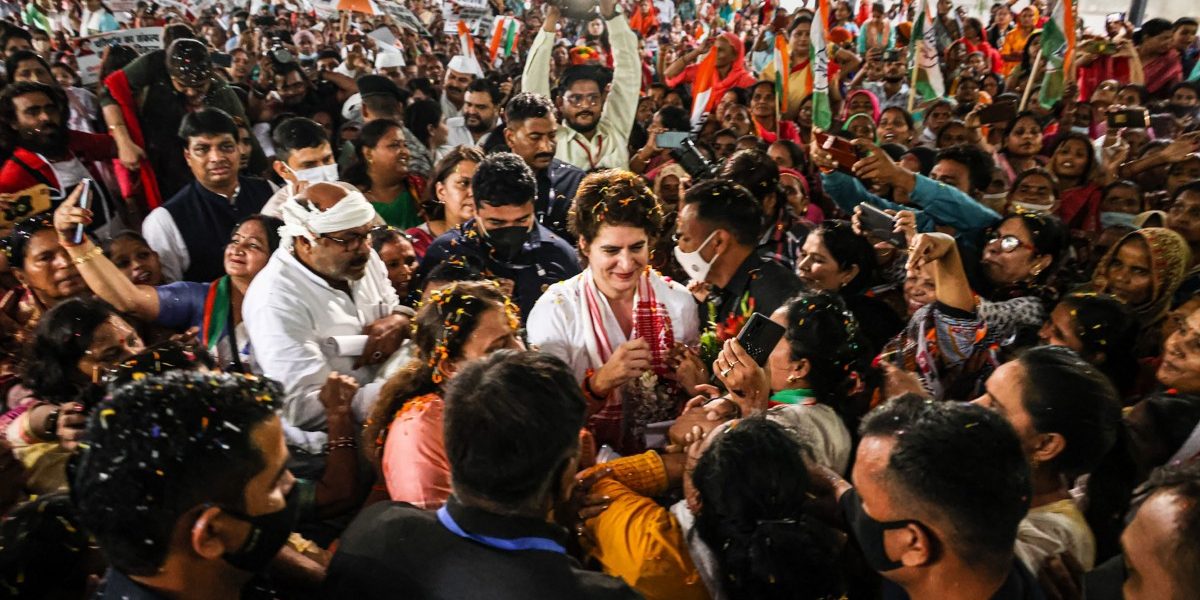 Priyanka Gandhi’s decision to have the Congress party field 40% women candidates in the forthcoming UP assembly elections has created much excitement. There is powerful symbolism in the idea but it is by no means novel.

Remember, Nitish Kumar as conscious strategy wooed women voters in Bihar with myriad welfare schemes. His decision to ban liquor in the state was primarily aimed at women voters. He even gave about 35% of the tickets to women candidates. Out of 43 women candidates of the Janata Dal (United) only six won.

In sharp contrast, women candidates have had much greater success in the recent assembly elections in West Bengal. TMC MP Derek O’ Brien says his party roughly gave 40% of the tickets to women and their success rate was equally good – 40% of the party’s winning candidates were women.

However, women constituted only about 13% of JD(U)’s winning candidates in Bihar though they got 35% of the tickets.

It may be tautological to say women candidates do better in states where their general empowerment and literacy levels are much higher. In this context, it will be instructive to study the Hindi heartland region, where a cocktail of patriarchy and majoritarianism play a significant role in social and political life. Also note that women’s participation in the labour force is pathetic – in single digits in large parts of the Hindi belt.

Imagine, only five to eight out of 100 employable women actually even look for work in states like Bihar and UP. This ratio is much higher in southern and eastern states. This has a direct impact on their economic independence, empowerment, and consequently their voting pattern.

According to psephologist Sanjay Kumar , co-director at Lokniti, CSDS, women have started voting independently in recent years. A decade ago, only about 15% women voted independently without being influenced by their male family members. But now, a little over 50% women vote independently, says Kumar. Again, this number would widely vary between southern/eastern and the Hindi heartland states. These imponderables remain about voting trends among women. What is certain is women are definitely voting in far higher numbers than before. They are also outnumbering men in voting.

During 2019 Lok Sabha election, In #UP #women #turnout exceeded men turnout by 1%. #Goa women turnout was higher compared to men turnout by 2.5% and in #Manipur women turnout higher by 4.4%. Women #vote needs to be watched during Assembly #Elections2022. @csdsdelhi @LoknitiCSDS

So the question is, what magic will Priyanka Gandhi weave in the UP elections due early next year?

For one, by announcing 40% of the tickets for women, Gandhi has virtually signalled that the Congress party will fight in a large number of seats and may not have any effective seat adjustment or understanding with other opposition parties. It makes sense to play the “women empowerment” card with such fanfare only if you significantly increase your party’s presence in the electoral battle. Also, Gandhi is now committed to lead from the front as opposed to her largely backroom coordination role in the 2017 UP assembly polls, when the Congress party was in an alliance with the Samajwadi Party. The Congress seems set to go it alone this time. This sentiment will likely be reciprocated by Akhilesh Yadav, whose alliance experience was not good either with the Congress or BSP in 2017.

The real question is whether the Congress has properly thought through its strategy of tapping into women’s votes. Or is it just a big idea still waiting to be fleshed out in all its details? How much political momentum this campaign would gather in the months ahead is difficult to say.

One advantage for the Congress is that the BJP faces severe anti-incumbency in UP. Besides, no ruling party has got a second term in UP in over 35 years.

Also read: By Reserving 40% Tickets for Women, Will Congress Change the Political Game in UP?

There is a already churn at various levels. Farmers’ anger spreading from western UP to other areas post Lakhimpur Kheri, the assertion for real power sharing by non-Yadav OBC leaders within the BJP and the unhappiness in a section of the upper castes is certainly worrying the saffron party.

The women’s empowerment card launched by Gandhi has the potential to add to this churn if the Congress organisation, such as it is, gets energised with her acting as catalyst.

The Congress has certainly introduced a new variable in the electoral battle for UP. The BJP, which had 40% vote share in the 2017 assembly polls, begins with a big advantage because it can afford to lose upto 8-10 percentage point votes and still remain in the game with some help from a fragmented opposition. The “ladki lad sakti hai (girls can fight for power)” card played by Gandhi may further fragment the opposition vote if it fails to produce the right chemistry.

Congress had barely 7% vote share in 2017. How much can it improve from this level and how much will it hurt Samajwadi Party, the main challenger of the BJP , is something that will remain a big question as the UP poll process gathers steam. Clearly, this is Gandhi’s biggest political gamble so far.