Through social media posts, students have highlighted the Yogi Adityanath government's alleged failure to provide employment while farmers continue to raise their demands.

Students take on the BJP government with puns, hashtags, memes and spoofs. Photo: By special arrangement

New Delhi: With only a week left for the Uttar Pradesh assembly polls to begin, campaigns by political parties are in full swing.

Meanwhile, students and farmers, the two groups which have protested against the Yogi Adityanath government recently, are also making sure that their voices are heard. Because of COVID-19 restrictions, political parties have had to take their campaigns online.

Students and farmers are also using the same tool to assert their demands. Through puns, hashtags, memes and spoofs, these groups are highlighting the government’s poor track record on providing employment opportunities and the delay in meeting the demands that were raised during the year-long farmers’ protest. 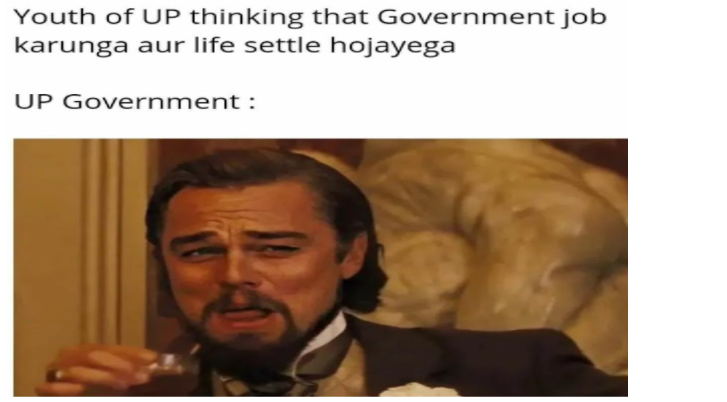 Students as well as farmers have consistently expressed their discontent with the Yogi Adityanath-led BJP government in UP, through slogans, posters and even memes on social media platforms.

Rajat Singh from Prayagraj, who is president of an informal students’ union in UP, said that they have taken to social media to raise their demands, including teachers’ recruitment in vacant positions, through creative means.

A protesting student said that the UP government has not yet started the process of recruiting almost a lakh vacancies in teaching positions. “Who says that break-ups hurt the most, have you ever seen the imposition of code of conduct on dreams?” he asks. 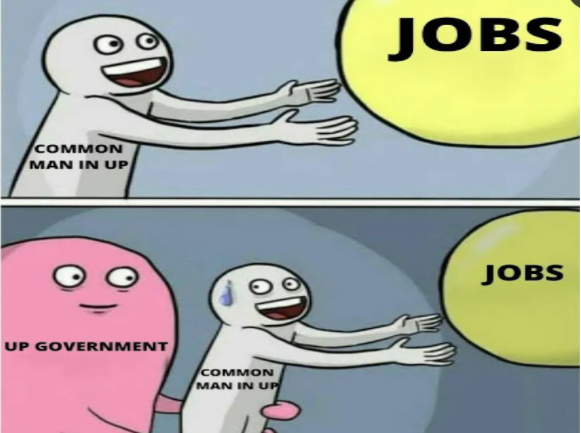 A meme made by students protesting against the RRB exam mess-up. Photo: By arrangement.

Several of his friends have decided to vote for opposing parties such as SP despite having previously been voters of the BJP, he said while speaking to The Wire.

One of the posts shared by a protesting student said that “the real disease will leave the country only after two doses of loss are given to the BJP, first in the 2022 UP polls and then in the 2024 Lok Sabha elections.”

“The youth is angry, very very angry,” he said, referring to the recent Railway Recruitment Board exam, which led to widespread protests by the aspirants.

Also read: Explained: ‘Trads’ vs ‘Raitas’ and the Inner Workings of India’s Alt-Right

An umbrella organisation of farmer groups, the Sanyukt Kisan Morcha (SKM) runs one hashtag every day, popularised by protesting farmers and supporters.

Farmer unions observed January 31 as “betrayal day”, saying that the government has not fulfilled any of the promises on the basis of which the farmers’ year-long protest was called off.

Monday’s hashtags – #FarmersProtest and #विश्वासघात_दिवस (betrayal day) – questioned the Modi government’s promise to withdraw cases filed against farmers during the agitation, and the status of the committee that was formed to look into providing minimum support price (MSP) of crops.

One of the posters reads: “The killers of our farmer brothers during the agitation are contesting elections on BJP tickets.”

Other hashtags such as #Modibetrayingfarmers, #FarmersRejectModi and #ModiChorMSPka that were used to attack the BJP government even during the farmers’ protest are again being used. This also highlights the fact that the farmers’ distress is a long-standing issue.

The SP-RLD alliance is the real challenger for the BJP this time, according to several political observers. Knowing this, the BJP government engaged in damage control quickly after withdrawing the three farm laws.

One of the posters by RLD says, “PM Modi, we told you in advance to accept the farmers’ demands as they are adamant. Ultimately, you had to give in…” 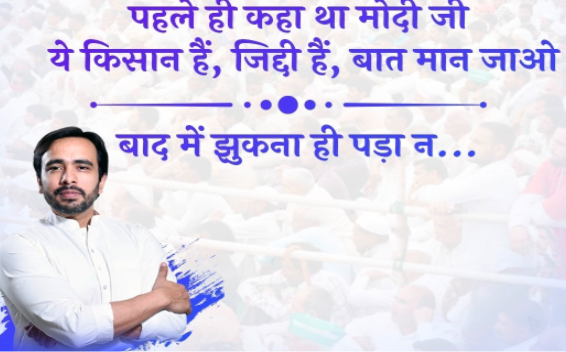 A poster by RLD says, “PM Modi, we told you in advance to accept the farmers’ demands as they are adamant. Ultimately, you had to give in…” Photo: By arrangement. 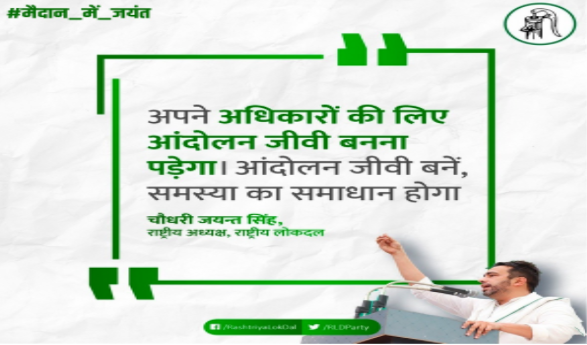 This poster by the RLD asserts the importance of protests in a democracy by criticising the word used by PM Modi to refer to protesting farmers, “Andolanjeevi” (Parasites that thrive on protests). Photo: By arrangement.

The SP-RLD alliance is likely to reap the benefits of this anger, as both parties have been vocal in their support of the farmer agitation.

It is also likely to benefit from the return of Jat-Muslim unity, an example of which is Rakesh Tikait’s slogan at the Kisan Mahapanchayat, “Har Har Mahadev, Allah Hu Akbar.”

Keeping in line with this, RLD chief Jayant Chaudhary took the initiative to start Bhaichara Zindabad Programmes (Long Live Brotherhood) across Western UP. For this, areas near Muzaffarnagar were given a special focus to remove the divide between Jats and Muslims post the riots in 2013.

Sunil Rohta, an RLD member from Meerut district, told The Wire that the party has a dedicated team on social media to focus on “real issues” and not let communal narratives dominate this election season.

“Only the BJP benefits from a Hindu-Muslim divide. Our goal is to fill that divide with love, brotherhood,” he said. 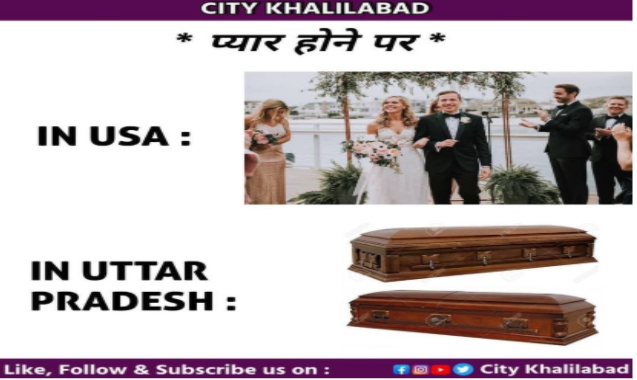 A jibe at the love-jihad law in Uttar Pradesh introduced by the BJP government. Photo: By arrangement.

The SP-RLD alliance is using hashtags such as #MahantNahiJayantChahiye (We don’t want a priest like Yogi, but Jayant Chaudhary) and #jayantakhilesh to promote the alliance.

Meanwhile, the BJP has taken its Hindutva agenda online. In Ghaziabad’s Loni, an aggressive Hindutva campaign is already in place by the saffron party to consolidate Hindu votes divided by castes. 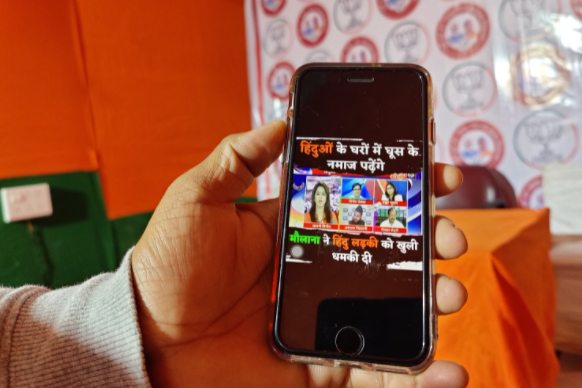 One of the videos that are circulated from Gurjar’s social media team to consolidate Hindu votes. The text reads, “A Muslim priest has threatened a Hindu girl to enter Hindu houses and offer namaz inside.” Photo: Ismat Ara/The Wire

The social media team regularly raises issues such as cow slaughter and ‘love jihad’ and shares them with lakhs of target voters through WhatsApp forwards, tweets, Facebook posts and Instagram reels.

A member of the team told The Wire that their focus is to present Gurjar as being tough on the issue of cow slaughter issue.

Gurjar was been served a notice by the Election Commission for his slogan, “Na Ali, Na Bahubali, Keval Bajrang Bali”. Ali in the slogan referred to Mohammad Ali Jinnah.

Also read: BJP Is Playing the Communal Card Again in up by Stoking Fear and Prejudice

The team has circulated some videos with polarising slogans like “Aap ko Loni me Ram Rajya chahiye ya Rakshas Raj? (Do you want Ram to prevail in Loni or demons?)”, along with strategic references to cow shelters.

Another member of this team told The Wire that during elections, candidates not only use social media to promote themselves, but also to spread rumours about opposing candidates.

In the first phase of polling, Kairana, Hapur, Muzaffarnagar, Aligarh, Bulandshahr and Ghaziabad are going to be the seats with a Muslim majority. Therefore, the saffron party’s polarising statements come in handy to unite Hindu voters from different caste groups and help with vote consolidation.

The BJP has already made the Kairana ‘exodus’ a political issue in western Uttar Pradesh, with Union home minister Amit Shah carrying out a door-to-door campaign in the city for his party.

BJP’s Mriganka Singh, daughter of former MP Hukum Singh, will contest from this seat against Samajwadi Party’s (SP) Nahid Hasan. It was Hukum Singh who had first brought up the “exodus” allegations – a claim that has long been disproved.

Hasan, the sitting MLA of Kairana, was arrested on January 15 by UP Police under the Gangster and Anti-Social Activities (Prevention) Act. BJP spokesperson Sambit Patra had lashed out at the SP for selecting Hasan as the party candidate and said, “Had Yakub Memom and Kasab not being hanged, they would have been fielded by the SP.”

A look at the recent tweets of UP chief minister Yogi Adityanath with references to Jinnah, Pakistan, Bharat Ma (Mother India), supposedly an attack on opposition parties, seems like another attempt to push the Hindutva narrative. It is also in line with the divisive election campaign of the BJP in other parts of UP.

Meanwhile, RSS affiliate Bajrang Dal has also come out in support of the BJP in UP. Gaurav Sharma, who heads the Aligarh branch of the Bajrang Dal, has been participating in door-to-door campaigns to support the saffron party in the elections. 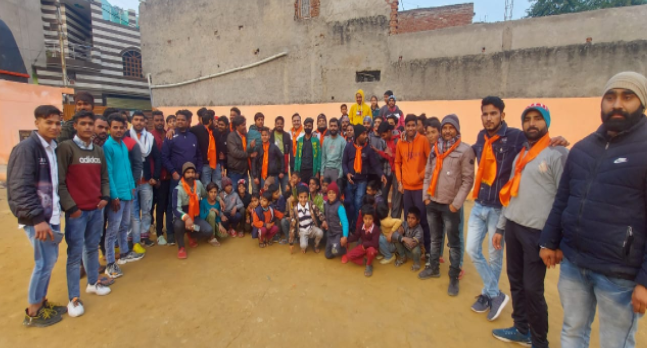 Members of the Bajrang Dal are actively campaigning for the BJP. The common motto of both organisations is to ‘protect Hinduism’ from threats of Muslim domination. Photo: By arrangement. 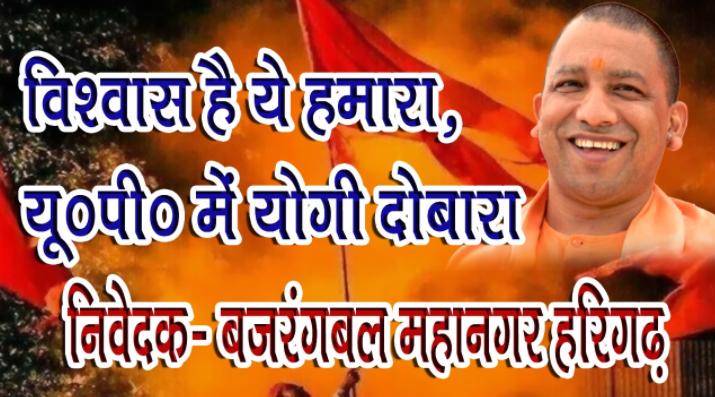 A poster by Bajrang Dal says “We firmly believe that Yogi will again rule UP.” Interestingly, the Bajrang Dal has used the name Harigarh instead of Aligarh. Photo: By arrangement.