A closer look at the demographic equations in UP makes it clear why there is such a fierce fight for the non-Yadav OBC vote. 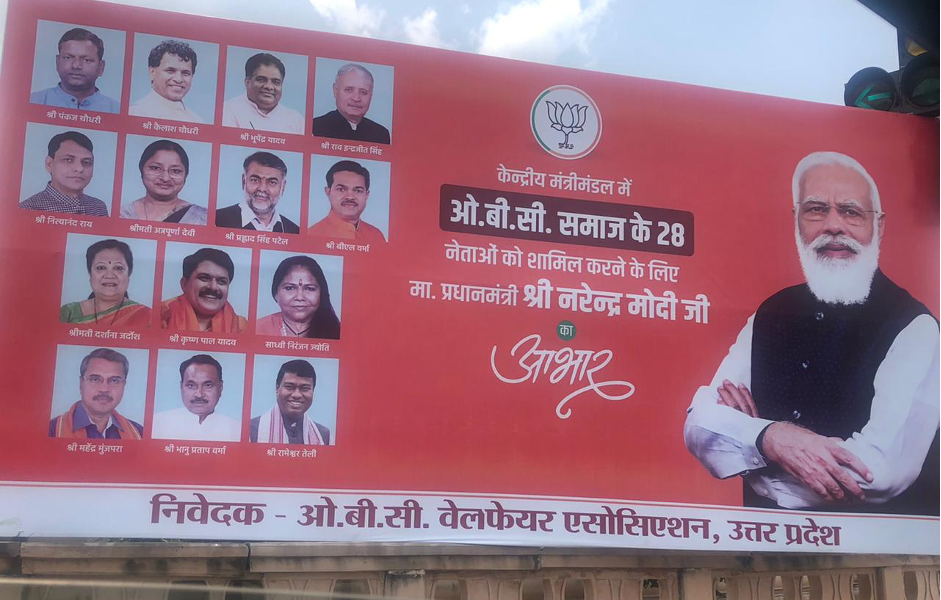 Posters put up by the BJP after the cabinet reshuffle in Delhi. Photo: Aman Khan 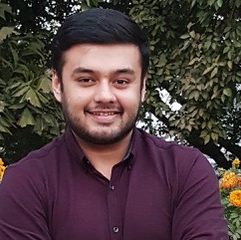 Lucknow: The morning after Prime Minister Narendra Modi expanded his cabinet in Delhi, multiple hoardings came up across the poll-bound state of Uttar Pradesh. They carried photographs of the newly inducted ministers from OBC communities, with the caption, “Our gratitude to the respected PM Narendra Modi for inducting 28 OBC leaders in the Union cabinet.” Though caste has always been a factor while selecting ministers in India, this appears to be the first time that hoardings were erected just to advertise the matter.

There are 42-45% OBC voters in UP. Yadavs are around 9% of those, and have traditionally supported the Samajwadi Party. Parties continue to fight over the 32-35% of non-Yadav OBC votes. This is evident also from the fact that among the 28 newly inducted OBC ministers, only one is a Yadav.

A closer look at the demographic equations in UP makes it clear why there is such a fierce fight for the non-Yadav OBC vote.

A number of political analysts have predicted caste-wise voting preferences in the run-up to the 2022 assembly elections. They have made these predictions after studying voting patterns in previous elections, and keeping in mind contemporary politics in the state.

Brahmins are about 11% of UP’s population. Senior journalist Brijesh Shukla says, “Despite all the hype about Brahmins being upset with the Yogi [Adityanath] government, about 8% of them will vote for the BJP.”

The Thakur community forms about 7% of the state’s population.

Alok Joshi, former managing editor of CNBC Awaaz, says, “Since UP chief minister Yogi Adityanath himself is a Thakur, about 6% of them are expected to go with the BJP.”

Voters from the Vaishya community are about 3.5% of the state’s population. They are considered to be traditional BJP voters. According to a post-poll study of the 2014 and 2019 elections by the Centre for the Study of Developing Societies (CSDS), around 70% of members of the Vaishya community voted for the BJP in UP. Sharat Pradhan, a veteran journalist says, “This time also about 2% [out of the 3.5%] of them are expected to back the BJP.”

The non-Jatav Dalit vote is about 11% in UP. Dr Ravi Kant, assistant professor at Lucknow University, says, “The BJP has made inroads into these communities, 5-6% of them are expected to vote for the BJP.”

The Samajwadi Party (SP) also has a dedicated vote bank. There are 9% Yadav voters in UP. Vishwas Yadav, a social activist, says, “The Yadav community feels humiliated under the present regime and 7-8% of them are expected to go with the Samajwadi Party.” Muslims are 19% of Uttar Pradesh’s population. Hisam Siddique, a senior journalis,t says, “About 15% of the Muslims are expected to vote for the SP, because they feel that only Akhilesh Yadav can give a strong fight to the BJP.” In addition, 3-4% of the voters generally cross vote between the BJP and SP.

At the end of these, both the BJP and the SP are getting between 25% and 28% of the votes. Shamshad Khan, psephologist and managing director of PEACS News Service says, “The remaining 35% of non-Yadav OBC’s will decide the fate of the election. Whichever party gets more than 50% of the non-Yadav OBCs votes is likely to form the next government in UP. In addition to it they may get 5-10% floating votes of those voters who are undecided.”

This is why votes of non-Yadav communities like Kurmi, Rajbhar, Nishad, Lodh, Maurya-Kushwaha, Jat and others have become the strategic focal point for political parties.

Kurmis are the second largest OBC community after Yadavs in UP. They hold sway over 16 districts of UP with around 12% population. These districts include Mirzapur, Bareilly, Sonbhadra, Unnao, Banda and others.

Since 2014, a large section of Kurmis have backed the Apna Dal/BJP alliance. Anupriya Patel, president of Apna Dal (S), a regional party, is considered the biggest mascot of Kurmi politics. She is in alliance with the BJP and became a minister in the Union cabinet in 2016. In the 2017 assembly and 2019 Lok Sabha elections, Apna Dal (S) won eight and two seats respectively. In the Modi government’s second term she was not given a ministry, but ahead of the elections, realising the importance of Kurmi votes, three Kurmi leaders – Anupriya Patel, B.L. Verma and Pankaj Chaudhary – were inducted into the cabinet in 2021.

Mulayam Singh Yadav had groomed Beni Verma as the Kurmi face of the SP. He was the second most powerful minister in Mulayam’s cabinet in 1993. His death had badly impacted the party. With regard to Kurmi votes, the demographic equation also goes against the SP. In most of the Yadav-dominated areas, Kurmis are few in number.

Also read: Caste and the Prospects of Modi and Yogi in the Uttar Pradesh Elections

Akhilesh Verma, an activist in Lucknow, says, “The SP has not made efforts to win back the Kurmis, and since they are inclined towards Hindutva, they find the BJP to be a natural ally.”

But there are contrary views as well. Hisam Siddiqui, senior journalist, says, “Anupriya Patel is not the leader of all Kurmis in UP. In districts of Bareilly, Faizabad, Bahraich and Ambedkar Nagar, Kurmis will vote for SP also.”

The Rajbhar community is around 4% of the population in UP, with a significant presence in eastern UP. They are followers of the 11th century king Suheldev, who defeated the nephew of Turkic conqueror Mahmud of Ghazni in Bahraich.

Om Prakash Rajbhar of the Suheldev Bhartiya Samaj Party (SBSP) has tried to develop himself as the face of the community over the years. He formed his party in 2002. In 2017, his party contested eight seats in an alliance with the BJP and won four of them. He became cabinet mister in the state but later he broke off ties with the BJP.

Nishads are a community of fishermen who live along the Ganga, which flows through 26 districts of the state, and other riverine areaa. They have a sizeable presence in Gorakhpur, Maharajganj, Deoria, Mirzapur, Prayagraj, Varanasi etc. As per Hindu mythology, it was Nishadraj (the king of the fishermen) who sailed Rama’s boat in Shringverpur, Prayagraj to cross the Ganga on his way to exile.

Deputy chief minister Keshav Maurya has announced the installation of a huge statue of Nishadraj in Shringverpur, Prayagraj.

The dacoit-turned-politician Phoolan Devi was the biggest icon of the community. She was accused of killing about two dozen Thakurs in her village in the Kanpur Dehat district to avenge her gang rape. The Nishad Party led by Sanjay Nishad is an ally of the ruling BJP. Sanjay has announced that his party will install a statue of Phoolan Devi.

Another Nishad caste party is the Vikassheel Insaan Party (VIP) from Bihar, which has entered the political fray in UP. Mukesh Sahani, the party chief, is a minister in the Bihar government. He was not allowed to install Phoolan Devi’s statue by the state government so he has announced a plan to distribute 50,000 statues in UP.

It is the Samajwadi Party, though, which lays the biggest claim to Phoolan Devi’s legacy. It was SP founder and former UP chief minister Mulayam who got Phoolan Devi released and gave her ticket before she became a Lok Sabha MP.

Also read: The Irony of BSP and SP Going From Being Anti-Brahmin to Now Wooing Them

On Phoolan Devi’s birth anniversary, August 10, 2021, the SP’s OBC Cell chief, Rajpal Kashyap, visited Phoolan Devi’s mother in her village. He announced a plan to build a memorial and install her statue when the SP comes to power.

There is an old demand from the Nishad community to be included in the list of Scheduled Castes. Despite being in power and in alliance with the Nishad Party, the BJP has not fulfilled the demand. Abhishek Nishad, a boatman at the Assi Ghat in Varanasi, says, “If BJP includes us in the Scheduled Caste list, only then will we vote for them, otherwise our options are open.”

Lodhs are the fourth biggest OBC community in UP. In 16 districts they are in a sizeable number. There are 20-22 Lodh MLAs in the UP assembly, mostly from the BJP.

Kalyan Singh was the tallest Lodh leader from the state. The honour he got posthumously from the BJP needs to be seen though a political lens too. Prime Minister Narendra Modi, defence minister Rajnath Singh and BJP president J.P. Nadda came to Lucknow to pay tribute after his death. Home minister Amit Shah visited Kalyan Singh’s hometown Atrauli to pay respects. Chief minister Adityanath followed his funeral procession for 60 km, from Aligarh to Narora in Bulandshahr. Deputy chief minister Keshav Prasad Maurya announced that six roads in six districts will be named after him.

Dr Ravi Kant says, “There is an old saying, if you love someone show it; and this is how the BJP has shown its love for the community. But due to the farmers’ unrest, it seems that the weaker sections of the Lodh community will go with the Samajwadi Party.”

“Maurya-Kushwaha ne thaana hai, ab Sapa sarkar banana hai (The Maurya-Kushwahas have pledged to bring the SP to power this time)”: This is the new slogan by regional outfit Mahan Dal which has found resonance even at the offices of the Samajwadi Party in Lucknow. The Mahan Dal, led by Keshav Dev Maurya, is a caste-based party which has a pre-poll alliance with the SP. The Mahan Dal contested 71 seats in 2017 and got six lakh votes.

The Mauryas have a sizeable presence in eastern UP districts of Ghazipur, Varanasi, Baliya, Kushinagar, Jaunpur etc., while Kushwahas are in large numbers in Etawah, Mainpuri, Etah, Jalaun and Jhansi districts in central UP and Bundelkhand.

Meanwhile Babu Singh Kushwaha, the head of the Jan Adhikar Party, a party of the Kushwaha community, is also in touch with Akhilesh Yadav for an alliance.

Senior journalist Sharat Pradhan says, “Maurya-Kushwahas, who voted en bloc for the BJP in the last assembly elections, are upset with the party. If Mahan Dal and Jan Adhikar Party both come together with the SP, it will make a difference.”

Jats are about 14% of the population in 22 districts of western UP. In these districts, 22% Muslim and 16% Dalits (mainly Jatavs) populations also matter. Some of the Jat-dominated districts in Uttar Pradesh are Baghpat, Muzaffarnagar, Shamli, Aligarh, Mathura and Hathras in the western part of the state.

Jats traditionally have been supporters of former Prime Minister Chaudhary Charan Singh. In 1998, his son Ajit Singh formed the Rashtriya Lok Dal (RLD). He garnered the support of Jats and that helped him become an MP eight times. After the 2013 Muzaffarnagar riots, the Jat-Muslim combination, the core base of the RLD, was divided and Jats backed the BJP.

In the 2017 UP assembly election, RLD won only one seat out of 99 seats in western UP. After Ajit Singh’s death, Jayant Chaudhary became the party president. He is in alliance with the SP. Last year, the region witnessed one of the biggest farmers’ movements by the Bhartiya Kisan Union (BKU) against three farm Bills. In these protests, Muslims have participated with Jats in large numbers. Harnam Singh, a BKU leader, says, “The BJP is shaken by the farmers’ protests; Jayant Chaudhary has become the leader of 50% of Jats if not more.”