A group of knowledgeable informants offer insight into the trends of the ongoing Uttar Pradesh election. 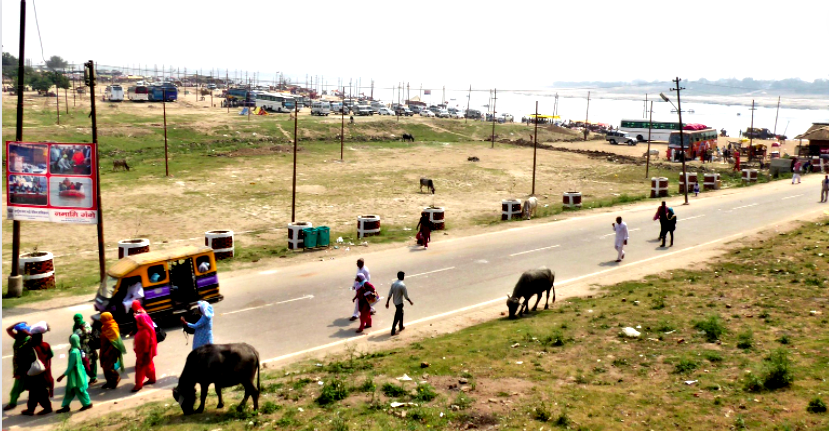 This writer has reported on seven national elections and one Uttar Pradesh assembly election from 1977 to 2019. He has covered all of them from the holy sangam at Allahabad (now Prayagraj) where hundreds of pilgrims from all over the country arrive to take a sacred dip at the confluence of the Ganga and Yamuna rivers. They are rowed to the confluence by traditional boatmen who quietly listen to their views, on politics and other topics.

These boatmen have proved to be the most accurate pollsters in forecasting election results. Their predictions have, astonishingly, been more reliable than those of most professional polling agencies and political pundits.

The boatmen’s predictions for the 2019 Lok Sabha election were published in The Wire on May 11 of that year. They predicted that Modi and his Bharatiya Janata Party (BJP) would return to power with a greatly enhanced majority. The boatmen’s forecasts of previous elections have been published in the Hindustan Times.

This time, the writer backed away from visiting the boatmen as there was a major Megh Mela at the sangam that attracted thousands of pilgrims throughout February. This could have resulted in spreading COVID-19 infections.

Instead, the writer identified another group of knowledgeable informants who may prove to be almost as reliable about the results of the current Uttar Pradesh election as the boatmen have been.

Surendra Singh (45) is the driver of an Uttar Pradesh state transport bus plying between Noida and Aligarh and Shashibala (30), who refers to herself with the prefix “Kumari”, is the conductor of the bus. While Singh said he supports Samajwadi Party (SP) leader Akhilesh Yadav, Shashibala emphatically said she will vote for the Bharatiya Janata Party (BJP).

I learnt this information because I have been accosting bus drivers and conductors as well as truck drivers in Uttar Pradesh for their electoral preferences and predictions about the current election. Their views are a significant pointer to the election outcome because, as they drive their vehicles and pick up passengers and goods from all over the state’s urban and rural areas, they happen to hear the electoral and other opinions of the bus travellers. Drivers and conductors of buses such as the UP state transport bus pictured here are meaningful stores of information regarding electoral outcomes due to the sheer number of opinions they overhear from their passengers. Photo: Jawid Laiq.

Moreover, the drivers and conductors themselves represent a cross-section of Uttar Pradesh as their home towns and villages are located across the state.

One of Uttar Pradesh’s busiest bus terminals is at Noida’s Sector 35, where every few minutes a state transport bus either arrives, leaves or stops to fill up on CNG. As I moved from bus to bus, the drivers and conductors responded to my queries, frankly and without hesitation

From Shashibala and Surendra’s bus, I moved to that of driver Jitendra Singh (30) and conductor Bittu Yadav. Bittu is six years older than Jitendra. Their bus route is Delhi-Noida-Mainpuri and both of them claimed that all four of the assembly seats around Mainpuri will go to Akhilesh Yadav. The conductor of another bus, Brijesh Kumar (30) from Mainpuri, however, said that it will be a close fight there, but incumbent chief minister Adityanath is more powerful and will emerge victorious.

Most of the drivers and conductors referred to ‘Yogi’ and ‘Akhilesh’, rather than the parties they lead. This seems to imply that the Uttar Pradesh election has turned into popularity contest between the two; their parties becoming secondary factors in the polls. What’s more, unlike during the 2017 and 2019 elections, Modi is rarely mentioned.

Also read: Why the Electoral Contest in UP Is Closer Than it Seems

Ayodhya is the home town of driver Pawan Kumar (32), though his bus route is Delhi-Noida-Kanpur. He reverently refers to Adityanath as “Babaji” and is a “hundred percent” sure that he will win the election with ease. Pawan rattles off the names of areas that he knows intimately, which “definitely” support Babaji: Ayodhya, Akbarpur, Aligarh, Azamgarh and Faizabad. A sadhu stands in a queue to cast his vote at a polling station in Vrindavan of Uttar Pradesh, India, February 10, 2022. Photo: Reuters/Adnan Abidi

Conductor Jaiprakash Sharma (24) is also sure that the election “hawa” (wind) favours Adityanath and that he will win the election. Jaiprakash’s bus route is Noida-Hathras while his hometown is Mathura.

Emphatically opposing Jaiprakash’s views is a conductor whose home is in Auraiya. He says that the “hawa” is blowing fully for the ‘cycle’ (the SP’s election symbol). He refuses to provide his name.

Sanjeev Kumar (27) forthrightly walks towards me and declares that he is for Akhilesh. He’s from Meerut and is employed filling CNG for the buses which arrive at the terminal by the minute. He suggested that voting is largely on the basis of caste. Conductor Arvind Gupta (24), also from Meerut, says Akhilesh will win the election.

Driver Kanwarpal Singh (35) plies his bus locally, between Noida and Greater Noida. His home is in Baghpat, Western Uttar Pradesh, where he says there is a “kantay ki takkar” (very close fight) between Adityanath and Jayant Chaudhury, the leader of the Rashtriya Lok Dal (RLD) and a major ally of Akhilesh Yadav. This colloquial, colourful “takkar” phrase cropped up in many of my conversations.

Driver Umesh Kumar Singh (46) also thinks that there is a “kante ki takkar” between Adityanath and Akhilesh, but greatly hopes that the former will win as he has ended the “goonda raj” (rule of thugs) in Uttar Pradesh. This is an unstated but obvious reference to the governance of the state from 2012-2017, when Akhilesh was the chief minister. Umesh’s bus route is Noida-Aligarh-Agra.

Another driver on the same route is Jiten Chaudhury (29), who hails from Mathura. He is convinced that the SP will win not only from the Mathura seat, but also the election as a whole.

From Noida, I drive five hours to the state transport bus stand next to the imposing Jain Mandir at the teeming centre of Firozabad in Central Uttar Pradesh. The first person I meet is the gruff Satyaveer (55), who drives his bus between Firozabad and Mathura. His home is in Hathras, notorious for the rape, murder and hasty police cremation of a young Dalit girl. He is not concerned about the incident and suggests that I am wasting his time. After some coaxing, he relents and says that will be voting for Babaji.

Conductor Deepak Bharadwaj (35), whose bus route is Firozabad-Mathura, claims that Firozabad supports the BJP “hundred percent”. This English phrase is commonly used in the middle of conversations in Hindi.

Driver Radharam (32) also plies his bus between Firozabad and Mathura. His home town is Mathura. He, too, calls this election a “takkar” between Babaji and Akhilesh and is all for Babaji, as he ended “goondagardi” (the thug menace) in Uttar Pradesh.

The next day, I moved to the small town of Bah, 70 km from Agra. Just outside Bah, I met a small group of truck drivers at a tyre repair shop. Ashok Kumar (70) and Sunil Bhadoria (40) take turns driving their truck. They live in Bah and transport goods between Agra and Kanpur. Both have already voted for the BJP candidate and say that the hawa in Bah is blowing strongly in the direction of the BJP.

Ashok is bitterly against the SP. Seven years back, during the previous SP regime, he was severely injured and his truck was looted by four alleged Yadav criminals. He displays the scar on his neck inflicted by the assailants. There is no violence and looting now, according to him.

Standing quietly behind Ashok and Sunil was Chottu Ram (45), who repairs tyres at the shop. He, too, had voted but refused to divulge his electoral choice. Biyander (60) crossed the road from his chai shop and joined us for a friendly chat. He showed us the voting mark on his finger and declared that he has cast his vote for the cycle. Biyander, too, said the Uttar Pradesh election result will turn out to be a “kantay ki takkar”.

Despite their political differences, all four are very friendly with each other.

Parked up the road was a gigantic, shiny, 14-wheeled Bharat Benz lorry. The young driver was taking a nap in the air-conditioned cab of his vehicle. I knocked gently and he readily climbed down for a chat with me. He was Gauri Shanker Yadav (22), who drives long distances from Gandhidham in Gujarat to Kolkata in West Bengal, traversing Rajasthan, Haryana, Uttar Pradesh, Bihar and Jharkhand. He was very nonchalant about his four-day-long journeys. What I asked him what he was doing in Bah, he said that he was visiting his family in Madhushala village, three kilometres away. He claimed that his entire village has voted “total for cycle” and that all of Uttar Pradesh, except for Gorakhpur, did the same.

Also read: In Praise of the Bicycle

After this chatty exchange, I took a break and drove for about 20 km, through dramatic ravines to the pristine Chambal river for a boat ride. The boatman, Mahesh Singh (32), from a nearby village, turned out to be a goldmine of local information.

He looked back favourably to the SP’s administration of 2012-2017 when Akhilesh provided cycles to many people in Mahesh’s village and when electricity rates were one-tenth of what they are now. Earlier, local disputes were settled locally within villages. Now the police get involved in disputes and demand big bribes to resolve them. His entire village had just voted for Akhilesh.

On the way back to Delhi, I stopped again outside Bah to buy freshly-harvested produce from the farmer of a small potato field. He expressed his “nafrat” (hatred) of the Adityanath government and derisively referred to the chief minister as that “ganja (bald man) without any family.”

Adityanath’s regime has done nothing for small farmers like him. To receive any government benefits, one has to travel long distances to complete paper work at government offices. This is a big waste of time, he said. Farmers choose to get on without any official benefits. The farmer reiterated Mahesh’s point that the police now get involved in every dispute and take more bribes. Akhilesh’s government was better, he said, refusing to give me his name.

It is quite apparent that Adityanath has polarised the electorate; they either revere him as a holy saint (Babaji) or revile him. The BJP’s leaders, despite their best efforts, have largely failed to polarise voters along Hindu-Muslim lines. It is also quite evident that the BJP and its allies will suffer a major setback from the 325 seats they won in the 2017 assembly election.

These conversations seem to indicate that the election result on March 10 will provide an extremely close outcome, with both Adityanath and Akhilesh Yadav, as well as  their parties, hovering around the magic figure of 202 seats, which marks the majority in the total of 403 in the Uttar Pradesh assembly.

It is also possible that neither of the two achieve the 202 mark. In that case, parties with a few seats each, like Mayawati’s Bahujan Samaj Party (BSP), Priyanka Gandhi’s Congress and others may be instrumental in forming the government in Lucknow.

Jawid Laiq has been an assistant editor with the Economic & Political Weekly and a correspondent with The Indian Express. He is the author of The Maverick Republic. He is solely responsible for the report published above.