Road-widening projects are underway to deal with the crowds expected at the Ram Temple. Those who have been running small shops, selling artefacts and puja material, are afraid the bulldozers will crush their livelihoods. 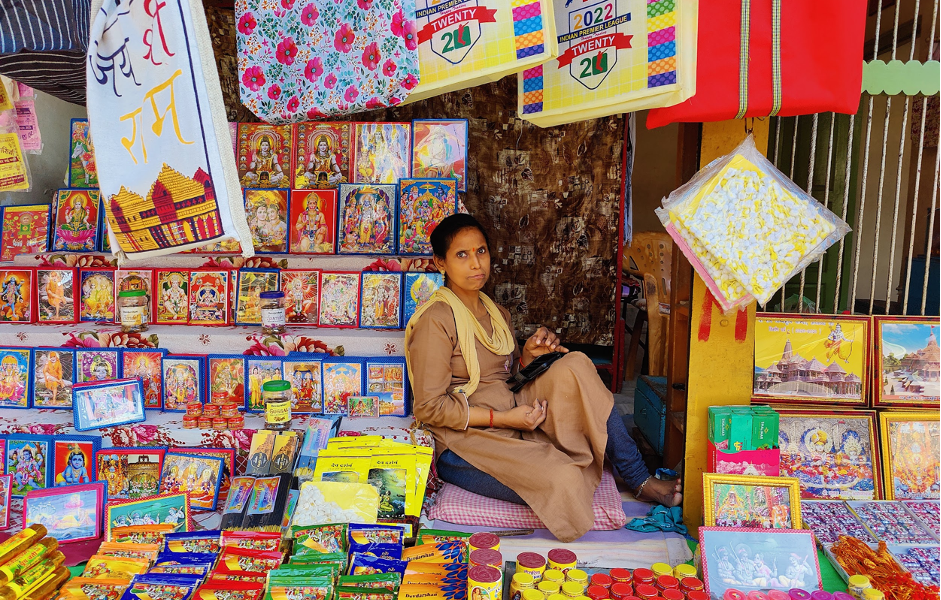 Over the past few months, she has been worried about losing her shop because of the government’s road-widening project, as part of the Ram Mandir.

She manages the shop and in return, her brother has made her a part of his family. Because of a speech disorder, it was difficult for her to get married and she lives with her brother.

Tradition says it is important that devotees first visit the Hanuman Garhi temple, which houses a huge structure of Lord Hanuman as a child, before visiting the Ram Temple.

The shop was first constructed by Ranjita’s grandfather, later run by her father, and since his death, she has been running it along with her brother. Markings have been made on the shops, worrying the shopkeepers. Photo: Ismat Ara/The Wire

Yet, she does not have ownership of the land on which this shop was constructed by her grandfather, like a majority of shopkeepers in this market.

Photo frames and bags with photos of Lord Ram, incense sticks, and few other colourful puja items are displayed in her small shop. “Jai Shree Ram,” reads one of the bags she is selling. She is now worried that with the Ram Temple road widening project, her shop will soon be demolished.

In 2021, the development plan in Ayodhya hit its first roadblock when several hundred shopkeepers on the Hanuman Garhi road protested against the proposed widening of the roads.

Several processions were taken out by the shopkeepers, and many shopkeepers sat on a dharna outside the district magistrate’s office to demand a response from the administration. Subsequently, letters too were written.

The road-widening will result in the demolition of some shops, while others will lose a part of the shop area. Almost a year later, shopkeepers and traders are still up in arms against the administration. They have accused the administration of not giving them a clear plan of either the compensation for the shops that will be demolished, or new shops for those who are likely to be displaced.

After the Supreme Court awarded the land the Babri Masjid was on for Ram Temple construction in 2019, work has been progressing quickly.

With polls in the district to be held on February 27, the opposition has made it into a poll issue.

Samajwadi Party’s Nand Kumar Gupta, head of the Ayodhya’s Industry and Business Trust, is among those using this to mobilise voters against the BJP candidate, Vivek Prakash Gupta.

“Many traders, especially smaller ones are getting disillusioned with the BJP because this is a direct attack on their livelihoods,” he said.

He said that even on the inauguration day of the Ram Temple (Bhoomi Pujan) on August 5, 2020, small shopkeepers were removed from the streets to welcome Prime Minister Narendra Modi.

“Where is their place in this new, mall-like Ayodhya that the BJP wants to build?” he asked. 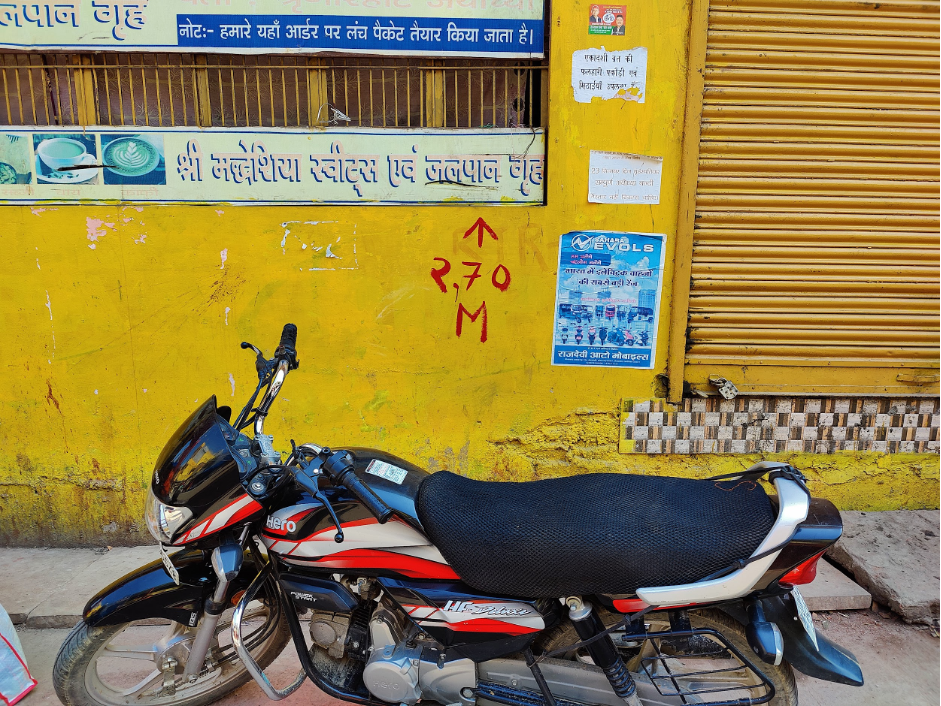 The road beautification project is part of the new vision for Ayodhya. Photo: Ismat Ara/The Wire

The uncertainty surrounding the compensation for traders and no official promise by the administration has forced some traders to reconsider voting for the BJP this time.

Nand Kumar added that there is larger plan at play, to “hand over” opportunities in Ayodhya to big industrialists.

“They want to remove other players from Ayodhya, and rule alone,” he said, concluding with their party slogan around this issue – “Bulldozer pe cycle bhari (Cycle – the SP’s election symbol – will overcome the bulldozer).” 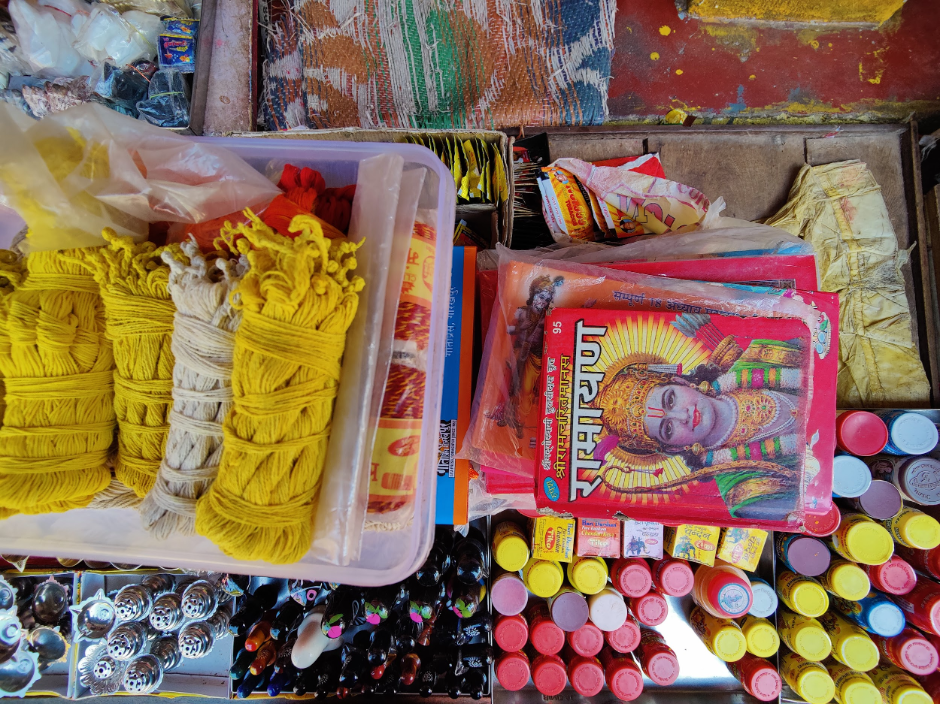 Abhay Kumar Pandey believes that since the Ram Temple movement, Ayodhya has become a hub of opportunities.

Pandey said that even though money cannot compensate for the emotional value of these shops owned by multiple generations of families, the administration must ensure that the traders also benefit from the development of Ayodhya.

“During the Ram Janmabhoomi movement, we were the ones who served water, food to the karsevaks. If those people who have honoured Lord Ram are left without livelihoods, why will they vote for BJP?” he asked. Flags with pictures of several Hindu deities are being sold in the market. Photo: Ismat Ara/The Wire

Many shopkeepers also say that even after supporting the fight for Lord Ram’s cause in Ayodhya, they are being cut off now that the temple is finally being constructed.

“Mehengayi toh rok nahin payengey, magar humara utpidan rok sakte hain (They cannot always control inflation and price rises. But what they can do is stop our suffering),” said one shopkeeper listening keenly to Pandey.

Congress’s Reeta Maurya and AAP’s Shubham Srivastava are also in the fray.

“Maharajas” and the zamindari system

Pandey further said that many shopkeepers believe that the zamindari practice is still very much alive in Ayodhya, because shopkeepers do not have ownership of the land on which their shops were constructed. This caused a lot of distress lately.

Those who own the land belong to several temple trusts, who traders refer to as “maharajas (kings)”. Most land around Hanuman Garhi is divided into four main branches and owned by different temple trusts.

Observers say that trusts were created in large numbers at the time to avoid letting go of large property owned by rich zamindars, allowing them to bypass the restrictions imposed under the Zamindari Abolition Act in 1950.

Pawan Tiwari, another shopkeeper, worries that the full compensation, if it comes, will go directly to the owners of the land, instead of the shopkeepers.

“While the shopkeepers’ livelihoods will get affected, the owners may get most of the compensation, if not all of it,” he said.

Because the land is not owned by them, many shopkeepers are hesitant to repair the buildings. Some say they do not have enough money for renovations. One shopkeeper told The Wire that recently, the roof of a similarly old shop had collapsed, killing four traders.

Because of fear of losing their livelihoods, the resentment of traders against the “maharajas” who own the land is growing.

Ranjita Gupta, and Ram Anurag who runs the adjoining shop, have come up with creative solutions to the problem, and insist that the administration must listen to them. A pamphlet announcing that the market will be closed in protest. Photo: Ismat Ara/The Wire

“They can build an extra bridge on the main road to divert the traffic, and keep the areas with small markets a no-zone for cars. People who want to go by car can use the main road, and others can walk,” said Ranjita.

There are a total of four roads leading to the Ram Temple, one of them currently under construction.

Many shopkeepers said that the main roads, which are already much broader than these small galis, can be further developed for ease of travel without affecting the markets.

Ram Anurag, listening keenly to Ranjita, jumped in. “The cars should be parked outside. People should go by foot. In any case, if cars start crowding the roads, small markets like this one will die a painful death,” he said.

However, he added that special arrangements must be made for those who have disabilities.

Ranjita then added that if the administration wants to widen the road anyhow, they should ensure that the shopkeepers don’t lose their livelihoods.

The current plan of widening the road by three metres on both sides will mean that many shops will get completely demolished.

Shopkeepers said that their grievances are not being heard by the administration.

The administration, on the other hand, has a huge task to manage the overwhelming crowd likely to flock after the Ram Temple construction, but also to manage security threats as the site has been previously disputed.

No to Ram Temple at the cost of livelihood

“We also want vikas (development) in Ayodhya. We want the Ram Temple, too. But not at the cost of our livelihoods,” said Awdesh Kumar Modanwal, selling puja items in his century-old shop.

The big festivals held every year in Ayodhya bring a lot of customers to these small markets, which is the time when he earns money. Most shopkeepers are worried about losing their shops in the old city of Ayodhya. Photo: Ismat Ara/The Wire

With his sales in the mela, he manages to save about Rs 30,000, which he dedicates towards the education of his two sons. “Jaan atki padi hai humari, ki kab bulldozer aajaye pati nahin (We’re living in fear of when the bulldozer will apply),” he said.

“What is the point of a boom here if the people of Ayodhya get displaced, our shops demolished, livelihoods destroyed?” he asked.

Some shops in this market are as small as 10 square feet. The shopkeepers worry that the promised compensation may favour some traders as there is no fixed criteria in the process.

According to traders, the district magistrate had issued assurances to traders in December after several rounds of protests, but they are still uncertain about their future as there is no official confirmation.

Among those who are actively pursuing the issue and engaging with the administration is Achal Kumar Gupta.

He owns one of the oldest eateries in the region, Chandra Marwari Eatery. He believes that tourists will need better roads when visiting the Ram Temple, and that the government must cooperate with the traders. “Hum vikas ke virodhi nahin hain (We are not against development),” he said.

Old Ayodhya should remain the way it is, he said. “The administration should focus on alternate ways during the construction of the new Ayodhya, with Ram Temple as its centre,” he said. 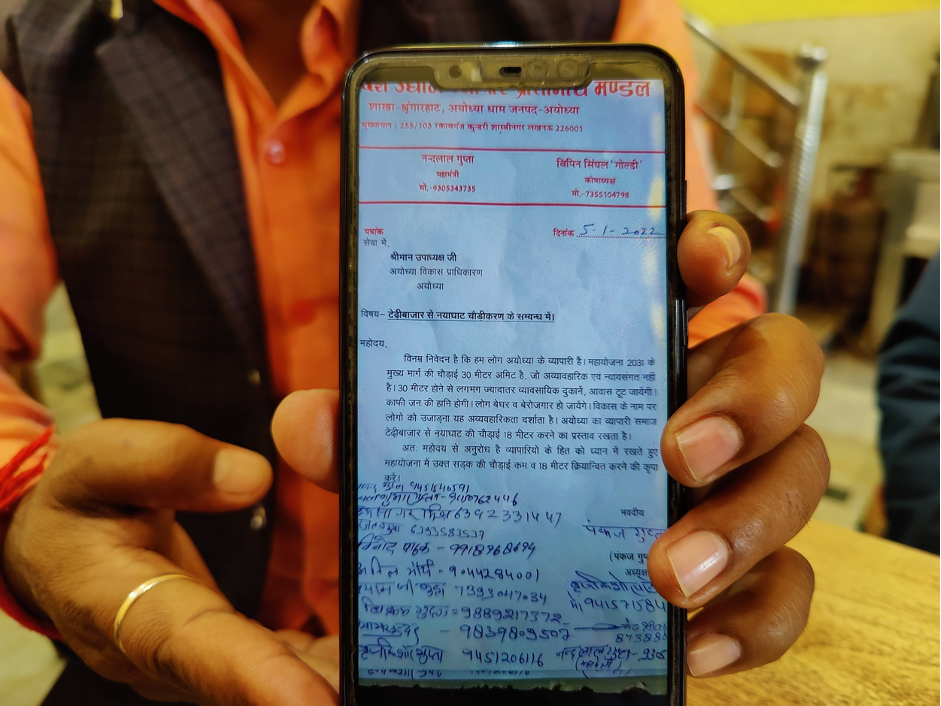 He is hopeful that when his shop is demolished, he will be compensated by the government to reconstruct the shop in the empty space at the back. But in case it does not go according to plan, he said he will ask the bulldozer driver to run over him first.

He then announced his demand, “Pehle bana dijiye, phir tod dijiyega (First give us space to reconstruct, then demolish our shops).”

The owners of the land will be given compensation as per the commercial rates, the administration said. The shopkeepers who are on rent will be compensated for the inconvenience, and will also be rehabilitated to a new market complex, being developed across six locations in the city.

The beautification of the roads under this project will be done under the Public Works Department (PWD).

City municipal commissioner and vice-chairman of the Ayodhya Development Authority Vishal Singh said that a survey has been conducted to identify the number of shops which will be affected. Most markets which will be affected are small ones, selling things worth Rs 10-20. Photo: Ismat Ara/The Wire

“The process of beautification is important because people from across the world will visit the Ram Temple, and management of crowds will be a big challenge,” he told The Wire.

“We have prepared clear cut guidelines. We also have a set formula for compensating the shopkeepers.”

“Beautification obviously causes some alignment of roads, shops,” he added. The work in this project will begin soon, but no timeline has yet been given by the administration.

The demolition of several hundred shops is certain, but the future of the shopkeepers who will be affected remains in the dark.