As the saffron party doubles down on polarisation, people’s issues are once again sidelined. 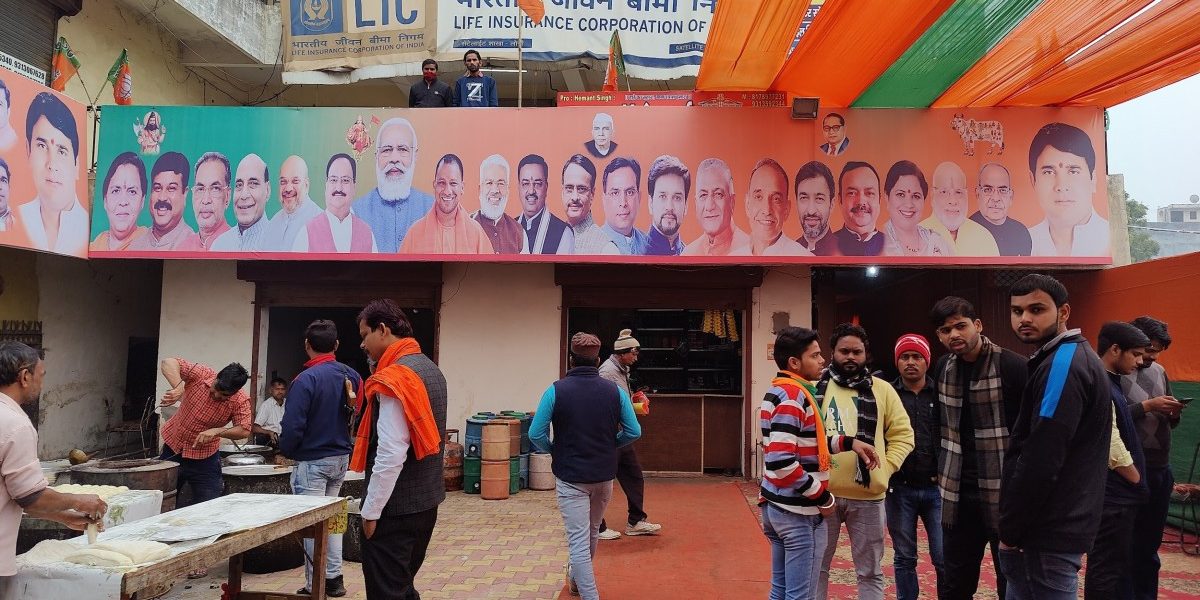 Loni (Ghaziabad): Ahead of the February 10 election in Uttar Pradesh’s Loni, sitting BJP legislator Nand Kishor Gurjar, a Hindutva hardliner who stoked controversies on several occasions in the past, has ramped up his communal agenda again.

Calling for the Hindus in his constituency to unite and ratcheting up his tirade against Muslims, Gurjar has jumped into campaigning with the controversial “Na Ali, Na Bahubali, Keval Bajrang Bali” slogan. The slogan along with the cries of “Jai Shri Ram” is being used widely in canvassing, to polarise voters.

The inflammatory slogan attracted the attention of the Election Commission on January 15 and notice was served on him, seeking his explanation. The poll body warned him against employing such slogans that could result in tensions among different caste groups or religious communities.

However, the notice seemed to have little impact on Gurjar, for he used the same controversial slogan two days after he was served the notice.

Outside Gurjar’s campaign office, songs laced with jingoism urging only “genuine nationalists” to vote for Gurjar blare from wayside speakers.

Speaking to The Wire, Gurjar says he stands by his slogan, adding that ‘Ali’ in that slogan meant Mohammad Ali Jinnah.

“Jinnah is responsible for the murders, rapes of lakhs of Hindus and also for dividing our motherland. The Samajwadi Party, by giving a ticket to a Bahubali (criminal), has shown that they believe in Jinnah’s ideology,” he says, referring to the SP-RLD alliance candidate Madan Bhaiya, whom he will face-off in the elections.

“I have full faith that Bajrang Bali will destroy them,” he asserts.

The Ghaziabad district of Uttar Pradesh, considered a stronghold of the BJP, has become a sensitive area with regard to law and order due to a marked increase in hate crimes and attacks against Muslims. 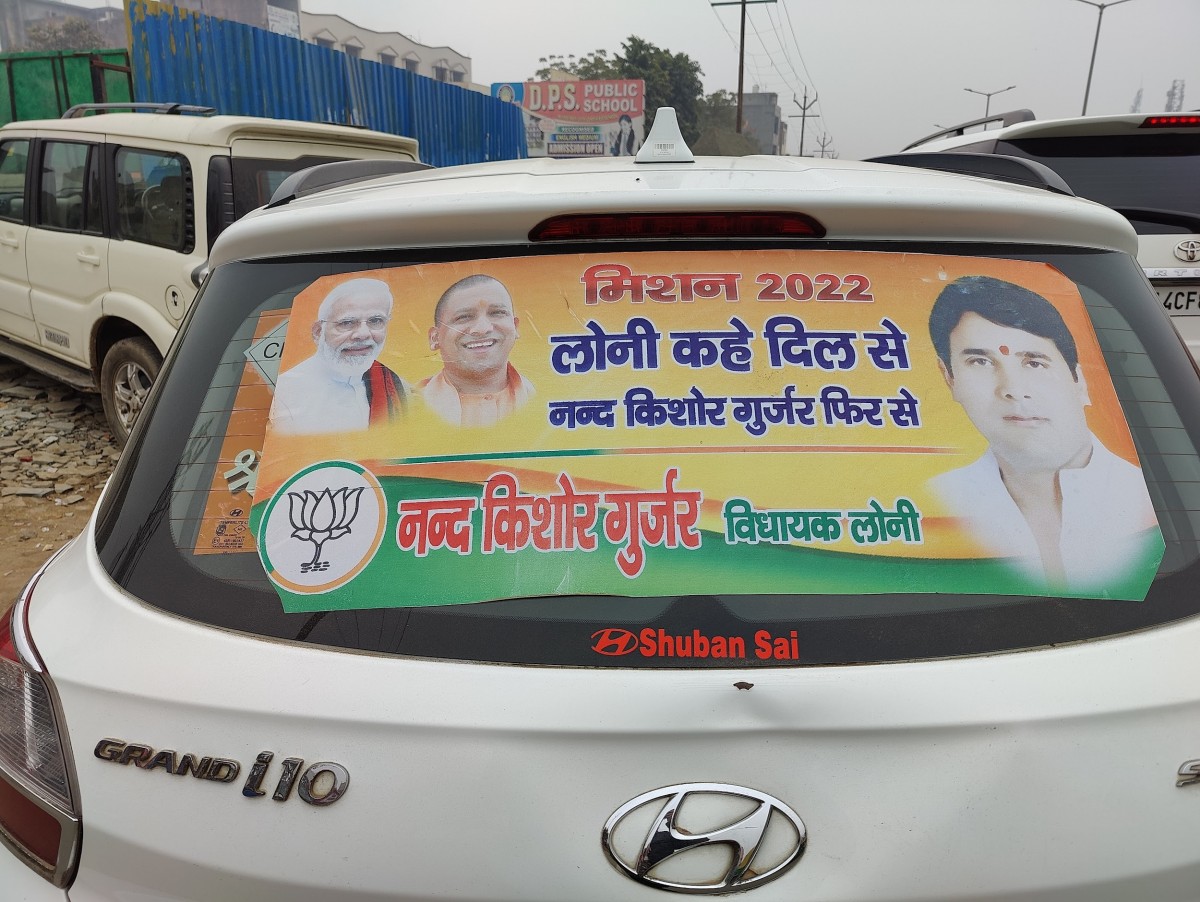 Speaking to The Wire, Gurjar claims that Loni, where meat shops have been forced to shut down, is now akin to Ram Rajya.

A pamphlet, detailing the work he had done as an MLA, talks of building roads, improving education and healthcare facilities as well as welfare work done by him for cows.

Throughout Uttar Pradesh, meat shops belonging to Muslims have been threatened or forced to shut down by Hindu right-wing groups.

But why did an elected legislator enforce such ‘rules’?

“It was in the best interest of people to have these shops with meat on display to close down,” says Gurjar. “Loni is now more beautiful than Delhi because of this.”

He further goes on to add, “Have you ever heard about Ram Rajya where meat is sold?”

According to Gurjar, there has been a marked shift in Loni, and the perception about it. For him, crimes such as cow slaughter, forced conversion and sexual harassment of Hindu women by Muslim men are now a thing of the past. “Loni is now,” he claims, “Ram Rajya where women can now go out till 2 am without any fear.”

Speaking to The Wire, Madan Bhaiya, SP-RLD candidate, has accused Gurjar of polarisation, by diverting his attention from the “real issues” of people.

“But we want change. We want to maintain communal harmony in Uttar Pradesh and focus on development for all,” he adds.

On Gurjar accusing him of being a “mafia”, Bhaiyya says that there are only two cases registered against him, both of which are political in nature. 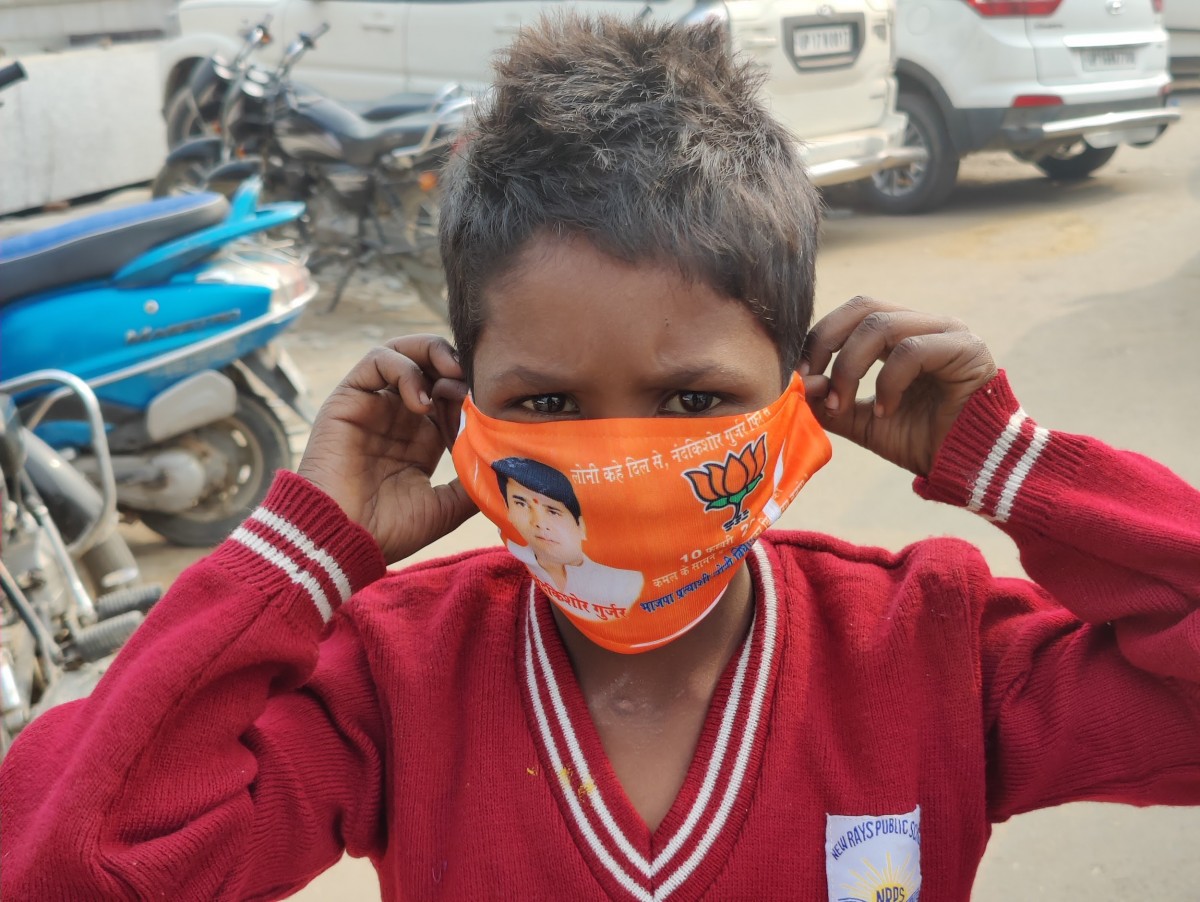 Stoking controversy in July 2020, Gurjar told Muslims to “sacrifice their children instead of innocent animals” on Bakra Eid. He said meat resulted in the spread of coronavirus.

The MLA claims that Muslims in Loni complied with his order without any resistance. As evidence, his assistant shows this correspondent a picture of men wearing skull caps cutting a cake with Gurjar, supposedly on Bakra Eid.

Rohit Singh, a local reporter from Ghaziabad, says that there is a sense of fear among the Muslim community in Loni, who worry that questioning orders from the MLA could result in them getting boycotted economically.

“Most Muslims in Loni work in the informal sector and live on daily wages. They don’t want to put their livelihoods at risk,” he adds.

A few months before elections, Gurjar claims to have written a letter to the SSP (senior superintendent of police), requesting him to withdraw police force from the area. “I have my own team, my own workers who are better equipped to maintain law and order here,” the MLA says.

According to him, cow slaughter cases have gone up sharply, and the police haven’t been doing much about them.

“If they cannot resolve the cow slaughter problem, we will do it ourselves,” he says, adding that such warnings from time to time are necessary to maintain peace and keep the police accountable.

Taking it further, Gurjar says he can even go so far as to do “illegal activities if it’s in people’s interest”.

With six criminal cases against him, Gurjar says that his number one priority is to maintain “law and order” in Loni. 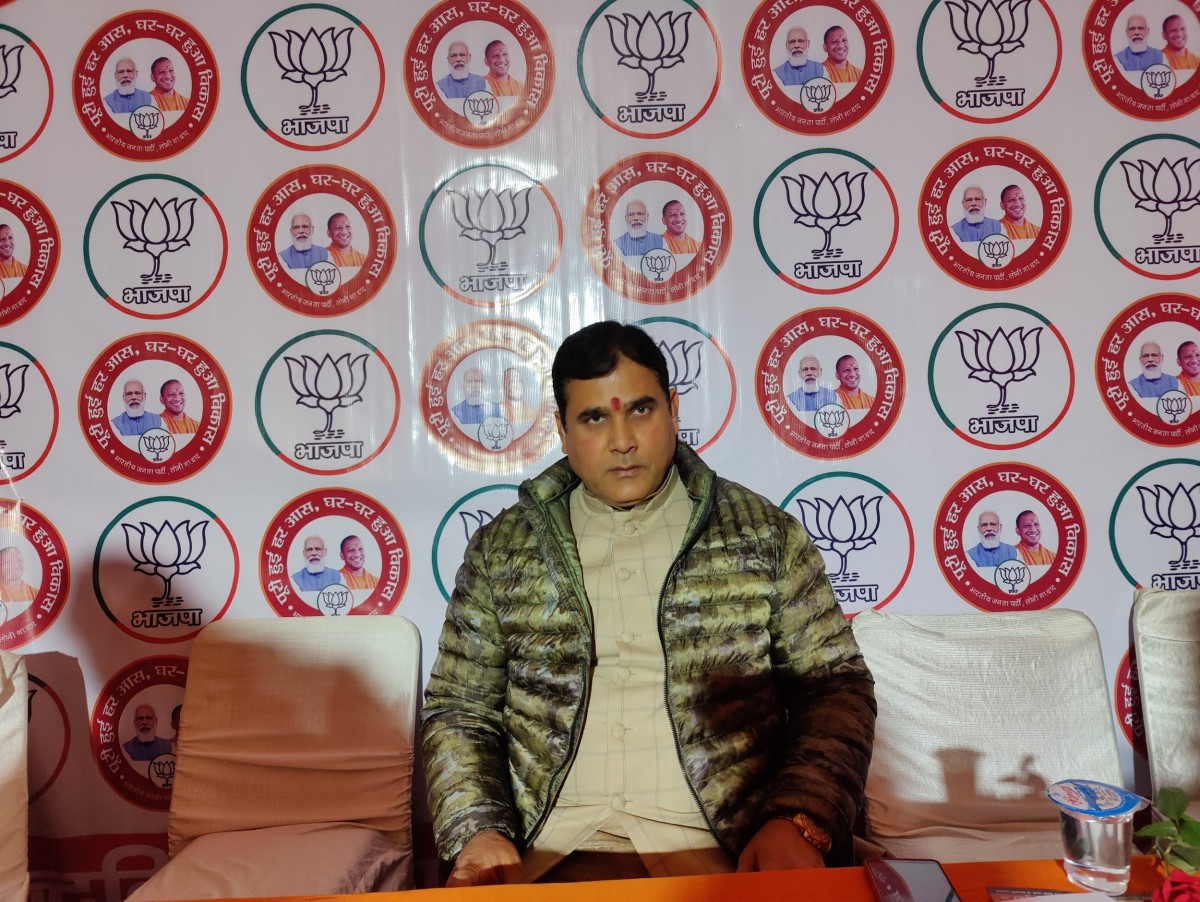 Although Gurjar claims that these cases against him are “political” in nature, four of the FIRs were filed after local courts intervened.

Gurjar has been the subject of a number of controversies in Loni.

Soon after he was elected in 2017, Gurjar forced the closure of a haddi mill, where animal bone remains were used to make products such as buttons.

The mill, owned by two local Muslim men, was causing inconvenience to a nearby locality, because of “bad smell coming out of the mill”, Gurjar had said. 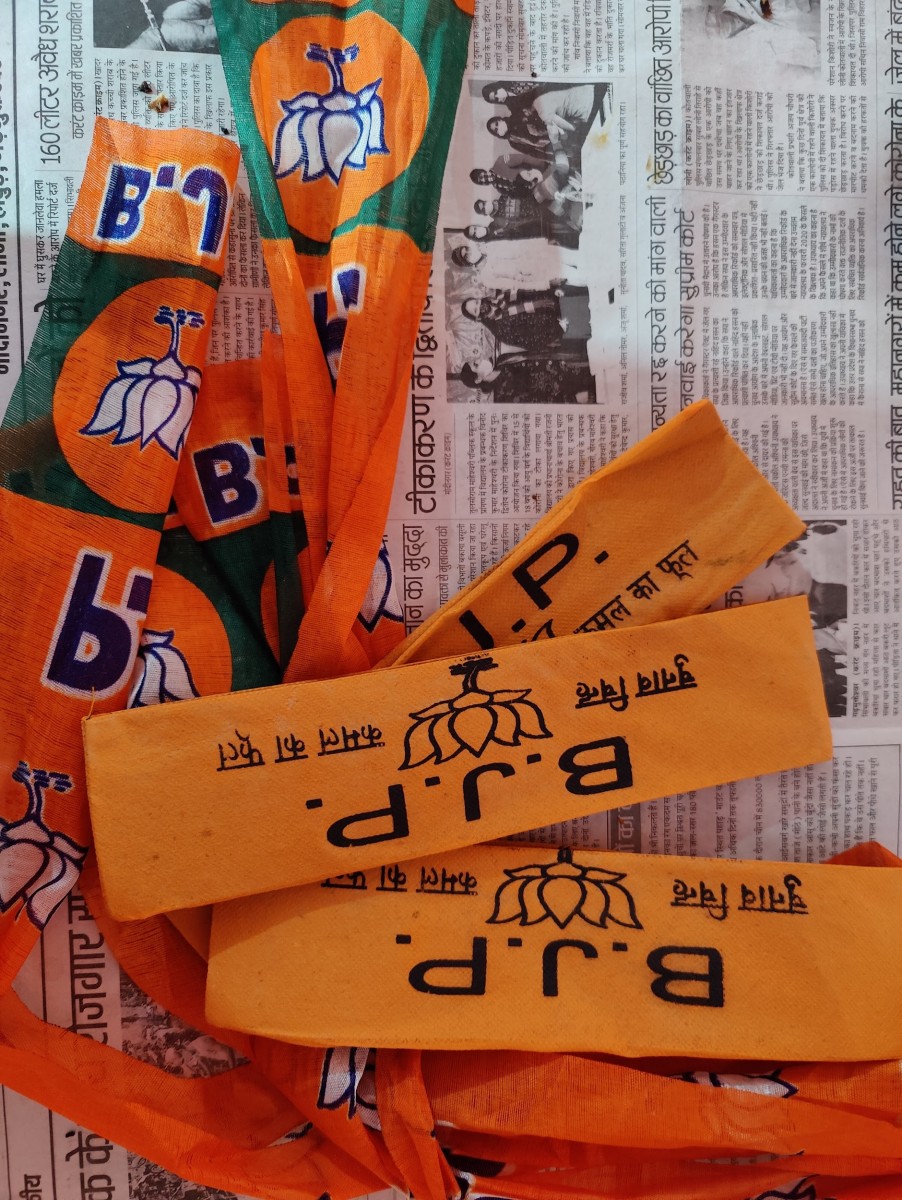 Stating that “people’s interests are the most important” for him, Gurjar adds, “I gave an order to shoot whoever is seen breaking COVID-19 rules, which ultimately saved lives.”

‘No corona in Loni’

Gurjar claims that for COVID-19 relief, he invested Rs. 2 crore to arrange free oxygen, medicines and ration for the poor.

“Isn’t it surprising that when people across the world were dying of COVID-19, there were only four cases in Loni?” he tells this correspondent. 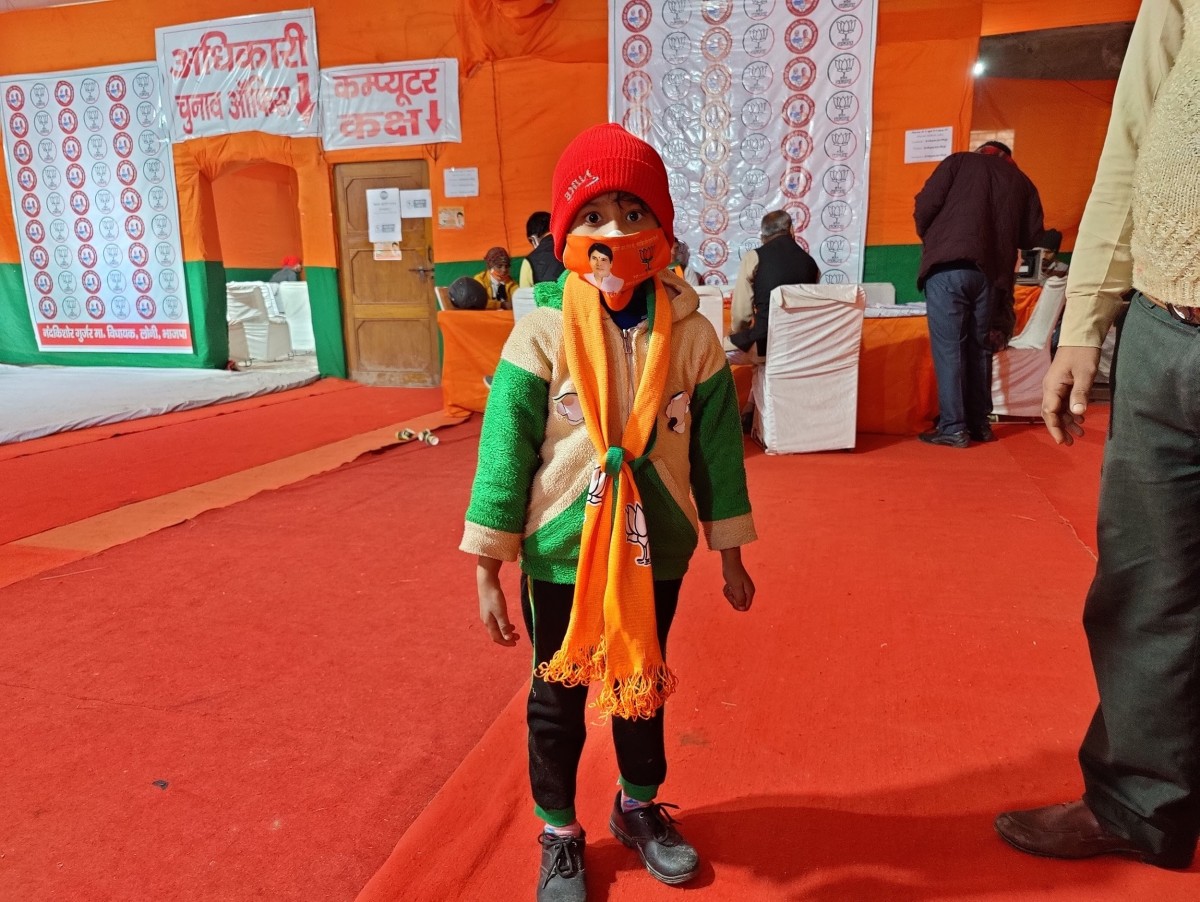 However, a story published in The Wire in 2021 during the second wave of COVID-19 uses data from hospitals, crematoriums and burial grounds to refute the “zero death” claims in several districts of Uttar Pradesh, including Ghaziabad.

Ranjita Dhama, the only independent candidate contesting polls from Loni, however, accuses Gurjar of negligence in handling COVID-19. Interestingly, Dhama left the BJP only a week ago to face off against Gurjar.

Other opposition candidates also say that instead of any “real work”, Gurjar has relied on controversies to build his image as a hard-line Hindutva leader. 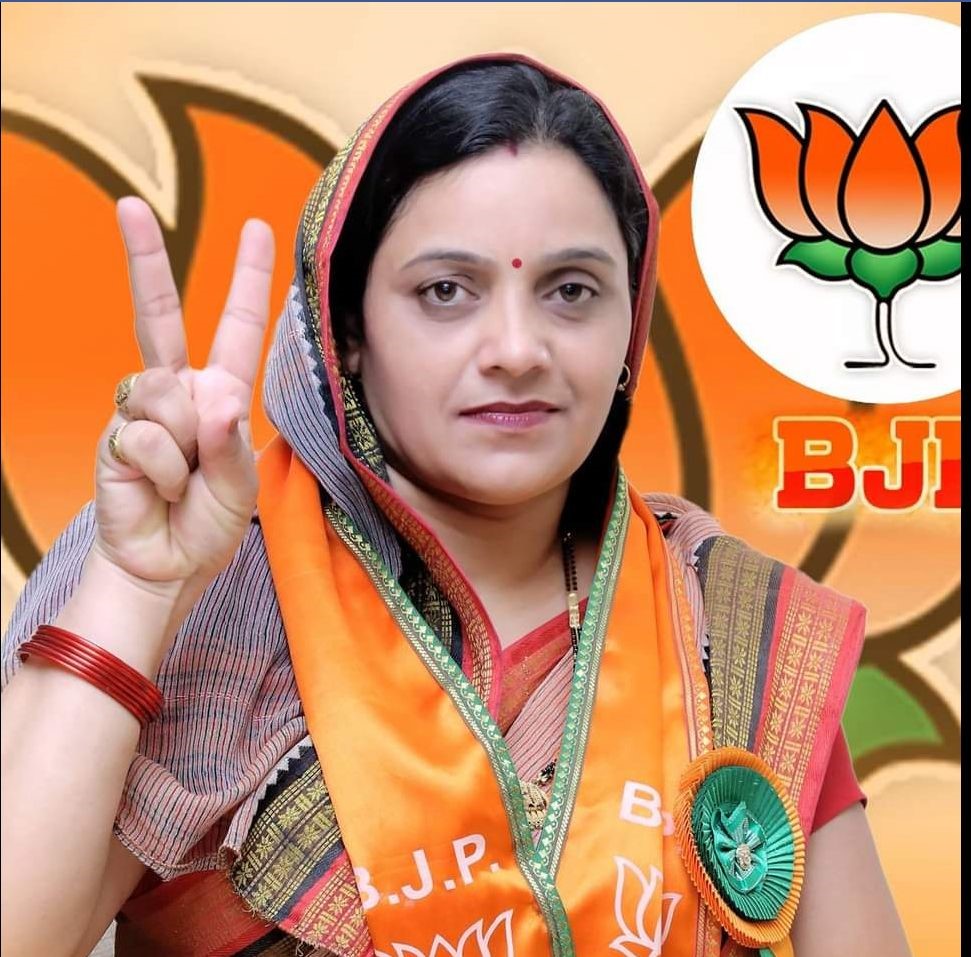 Ranjita Dhama was earlier with the BJP. Photo: By arrangement.

“He claims there was no COVID-19 in Loni, but only those who have lost their kids, mothers, fathers, brothers, sisters and spouses due to lack of oxygen know the extent of the damage caused,” adds Dhama.

Dalit leaders resigning from the BJP to join opposition parties, disillusioned farmers over farm distress and the government response to the farmer’s agitation all point to the fact that caste is likely to emerge as the main factor in the upcoming election.

In the last election in 2017, Gurjar (44) had won about 40% of the vote in Loni. Visible caste lines among Hindu voters and close to 40% of voters from the Muslim community indicate that relying on the Hindutva agenda may result in a consolidation of Hindu votes in the constituency.

According to Gurjar, Dhama, a Jat candidate, is no competition to him, as she may only end up hurting the SP-RLD candidate.

However, he knows that Haji Akil of the BSP could cause some “hardship” if Muslims come together to vote for him. “In Loni, it is difficult to win an election if all Hindus don’t come together. Hindus must come together,” he says.

Some people also believe that the real fight is between Gurjar and RLD candidate Madan Bhaiyya, who they say, is trying to consolidate the minority votes by using Gurjar’s own statements against him.

According to Arun Panchaal, a local reporter for a Hindi News channel, Gurjar’s developmental work has been overshadowed by his controversial remarks.

“Local issues, such as water clogging, have not been paid heed to. When it rains, drains fill and get clogged, causing the dirty water to overflow, even enter people’s homes,” he has told The Wire.

He also says Gurjar’s assertion that COVID-19 did not impact Loni is “false”. “One of my close friend’s parents died from corona, but the official list didn’t reflect their deaths.”

Much to the dismay of the Loni electorate, the pending work on an all-important flyover going towards Baghpat has not been completed for years. The flyover work began under the Samajwadi Party government after years of pressure from the locals. However, with the change in the government and BJP taking over in 2017, the progress since has been very minimal.

People in the vicinity, whom The Wire spoke to, have expressed hope that the pending work with regard to the flyover may be completed if there is a change in the government, resulting in better traffic management.

However, Gurjar has a different take on the flyover. Instead of completing it, he says he will get it taken down it is a “sign of the corrupt SP government”.

“We can’t always work as people say. They don’t understand what’s best for them,” he adds.

Gurjar also says that a new hospital with about 100 beds was built recently and that several small health centres were opened. However, several people in the constituency say that they still have to go to Delhi for medical treatment.