Amethi district, which will go to the polls on February 27 in the fifth phase, lacks basic amenities despite the fact that it has been represented by high-profile politicians over the decades. 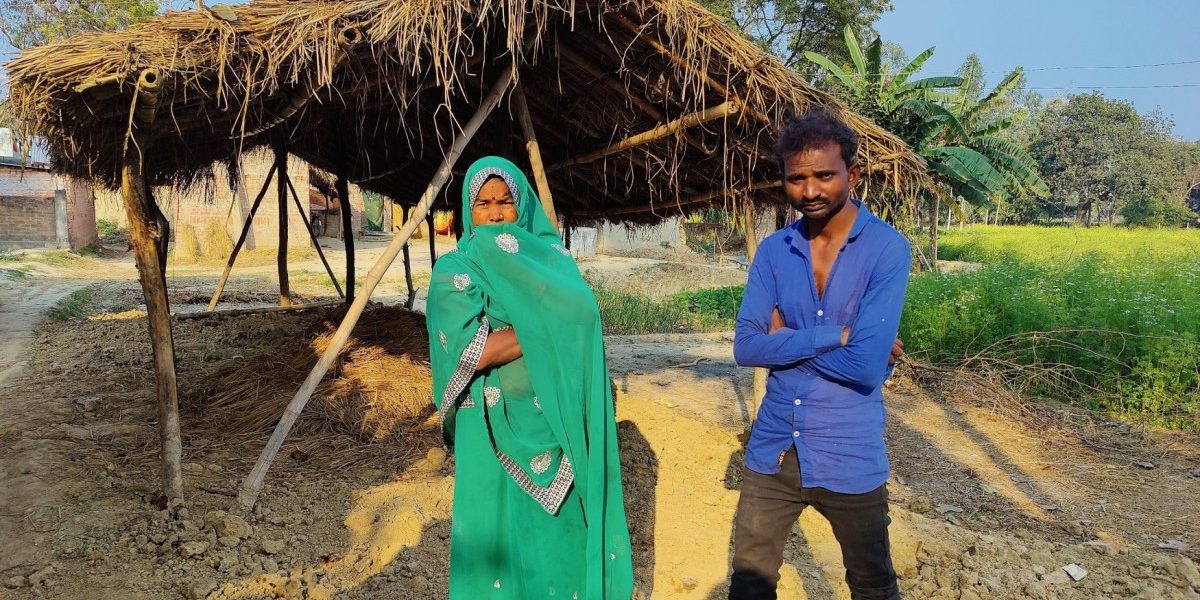 Amethi (Uttar Pradesh): Amethi is not any nondescript constituency, for it was represented by former prime minister Rajiv Gandhi, Congress’s Sanjay Gandhi and Rahul Gandhi in the past. Now, Union minister Smriti Irani is an MP from here.

However, the fact that it has been represented by high-profile politicians over the decades has not changed its fate. Largely a rural segment, Amethi still lacks basic amenities like roads, even in the centre of the town and what are considered arterial roads.

In addition to roads, the major concerns of residents are flooding during monsoon, access to government support, among others. While other concerns have been there for years, if not decades, rising numbers of stray cattle has turned out to be a big headache for residents, especially farmers, since the Yogi Adityanath government enacted anti-slaughter laws.

A stroll on the streets of Amethi doesn’t give you the sense that it is represented by any active MP or MLA, let alone high-profile leaders.

The main roads are narrow with encroachments on both sides, with vehicles and shops. Walking further past the main roads will take you to a dump yard, forcing you to take a u-turn.

In addition to issues concerning agriculture and unemployment witnessed across Uttar Pradesh, there are more local issues that could affect the outcome of the election in this high-profile constituency.

Amethi will go to the polls on February 27, in the fifth phase of elections in the seven-phase assembly elections in Uttar Pradesh.

Also read: Politics Revolves Around a King, a Palace and Old Feuds in This Amethi Seat

Visiting some of the villages in Amethi reveals that several local issues of people do not figure in the poll agendas of political parties at all. People here have been facing flooding to the extent that their houses get inundated with water during monsoons, caste-based discrimination, limited access to government support, stray cattle, and the lack of better roads.

At the mercy of the government

Pasis, the second-largest Dalit community in Uttar Pradesh, are found in large numbers in central parts of the state near Lucknow.

To reach Banpurva, one has to take a narrow kutcha road. It is challenging even for those traveling in a car, traversing through uneven roads.

“The best way is to walk or cycle,” a villager tells this correspondent.

Although there are a few pucca houses, which have been built recently under the chief minister’s housing scheme, the village is afflicted with several issues, particularly flooding during rains.

As most villagers here live on daily wages, they are in a way at the mercy of government for various things. 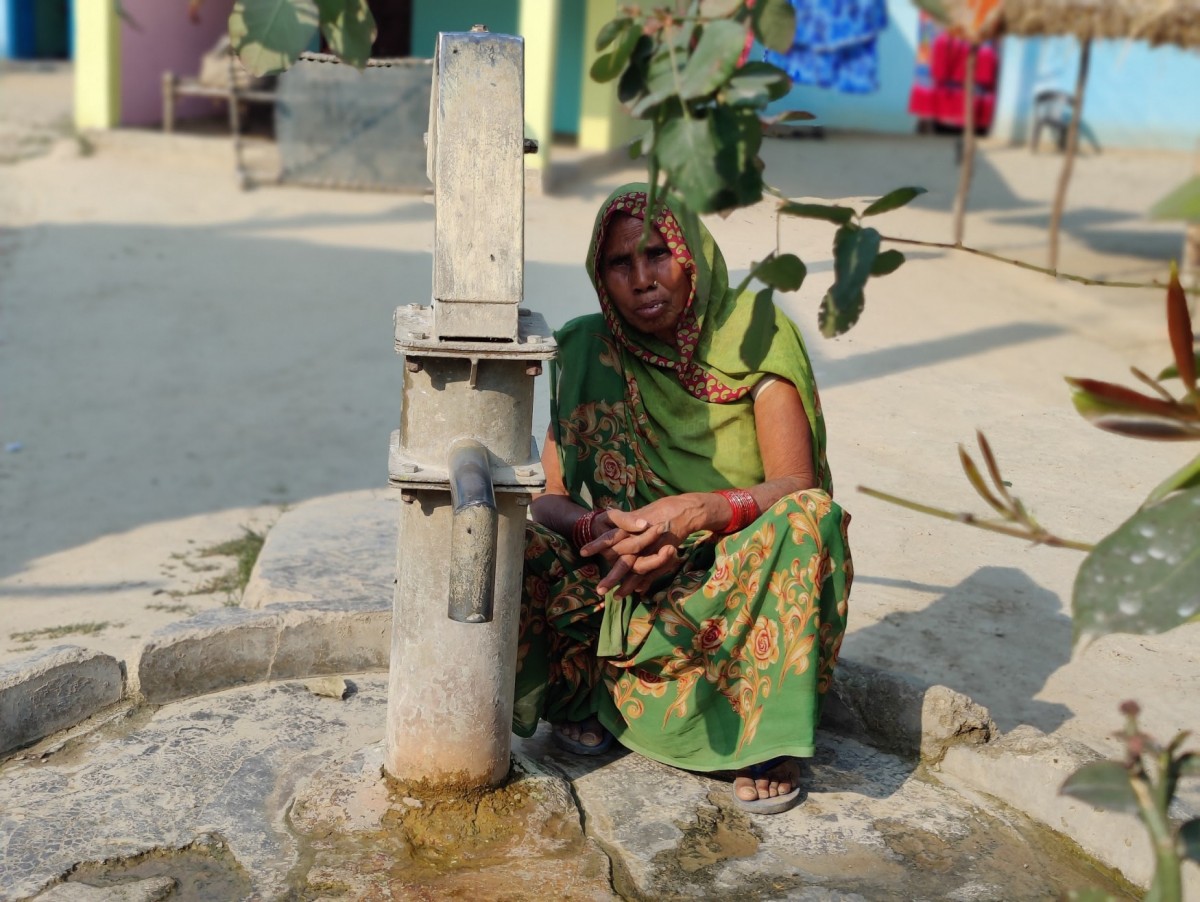 Most of the villagers who are daily wagers wait on the government for various things. Photo: Ismat Ara.

“We were asked to sit in separate rows, and told to eat separately,” a former student of the school recalls.

An FIR (first information report) had been registered against the headmistress Kusum Soni, who was later dismissed.

It’s been six months since that incident took place, however, it doesn’t seem to have any relevance now.

Speaking of how caste continues to affect their everyday lives, Nandini Saroj, an elderly woman, says there is a Brahmin village just next to their village, but they hardly have any contact with them. “Kahan wo Brahmin, hum pasi,” she says.

Of the many issues faced by villagers, flooding is a major concern.

“Flooding during rains is so bad at times that water reaches up to the level of our backs,” says Rakesh, a 32-year-old man.

Several villagers say that they voted for the BJP in the last term hoping that the issue of flooding would be resolved, but nothing has changed. He also adds that the village hardly has any profitable agriculture.

Raman, a 43-year-old farmer in Banpurva, says that they have very little land, which they mainly use for self-sustenance even though farming is the main occupation in major parts of the district.

Farming, for those without enough land or who cannot afford input costs, is an expensive livelihood.

Agriculture is considered the main occupation of people here, with at least 95% of farmers engaged in wheat and rice farming.

Amethi has what is locally known as “ussad zameen” which translates as ‘barren land’. The entire belt of Amethi, Raebareli and Sultanpur has been dealing with it for long.

Even though ration was distributed to the villagers twice every month during the COVID-19-induced lockdowns, not much has been done to provide employment to the inhabitants of this village and adjoining areas.

In such a case, the ration distribution seems only a short-term and a temporary measure to help villagers.

While on one side of the village, a team of young Samajwadi Party workers had come to campaign for the SP candidate, 28-year-old Sunita is busy tending to goats. Cattle is an investment for villagers. Photo: Ismat Ara

With a chronically-ill father to look after and little savings, the cattle is an important investment for her. She is among the girls who never went to school.

When she was younger, girls were hardly sent to school. Most girls even now do not go to school after a certain age.

Nobody from any other party except SP had come to meet them, the villagers say. 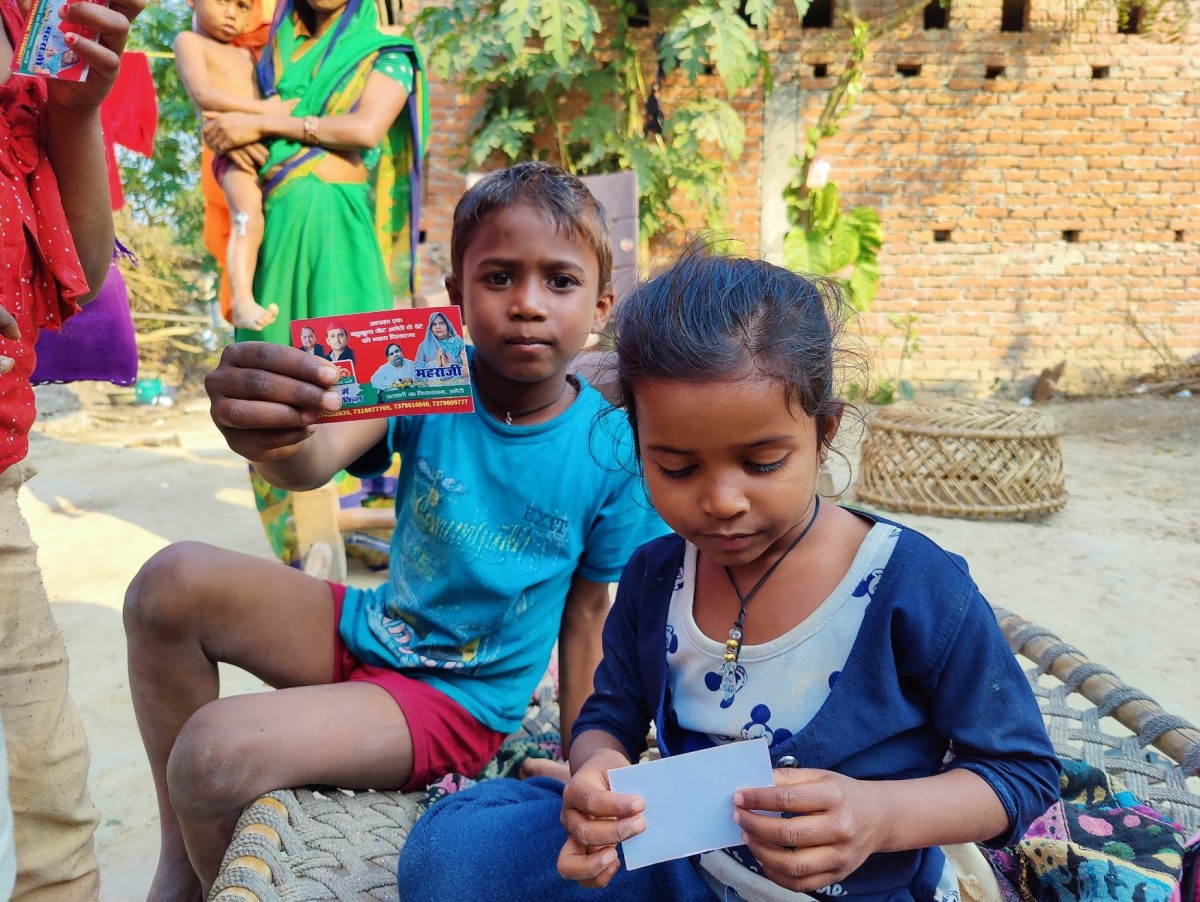 But they are still uncertain about which party they will vote for. A meeting will soon be held by elders of the village on the basis of which most villagers will cast their votes.

Out of these, the BJP had won three seats in 2017, while the SP had won one seat, that of Gauriganj.

In the Amethi assembly seat, the BJP candidate Sanjay Sinh is a Thakur, while the SP candidate Maharaji Prajapati is from OBC.

Sanjay Sinh is likely to get the core BJP votes and Thakurs but also across caste lines as he is a popular choice among people.

Prajapati is the wife of a jailed SP leader Gayatri Prajapati. She seems to be banking not just on the core voters of the SP but also on the sympathy garnered around what she calls an “unfair” arrest of her husband.

The Congress has nominated Ashish Shukla, a Brahmin, who is likely to eat into the Brahmin votes.

The BSP has also nominated a Brahmin, Ragini Tiwari, who is hoping to win over a large chunk of Brahmin votes along with the BSP’s core Dalit voters.

The SP is said to be giving a tough fight to the BJP in Amethi seats this time around, and a strong anti-incumbency against the BJP appears to have given an edge to the newly constituted alliance of SP-RLD.

In the Gauriganj seat, the sitting MLA Rakesh Pratap Singh of the SP is trying to woo his voter base again by holding nukkad meetings.

Against him is BJP’s Pandit Chandra Prakash Matiyari, who had previously won on a BSP ticket but later joined the saffron party.

The Congress has fielded Fateh Bahadur here, whose father Noor Mohammad had once represented the seat. Mohammad had died of an accident.

Mohammad Naim, who recently shifted from the Congress to the SP, hoping to win over his Gurjar belt voters.

In the Lok Sabha elections in 2019, Naim had secured close to 1.5 lakh votes on a BSP ticket.

In Jagdishpur (Reserved) seat, sitting MLA, MoS in state cabinet Suresh Passi is contesting again, but a wave of anti-incumbency against him is evident.

Congress’s Vijay Passi is also giving him a tough competition, according to observers.

The SP has fielded Vimalesh Saroj, and BSP’s Jitendra Kumar is also in the fight.

In Tiloi, the sitting MLA Mayankeshwar Sharan Singh is contesting again on a BJP ticket.

Nearly three dozen independent candidates are also in the fray, who may upset the arithmetic of parties.

According to reports, Union minister Smriti Irani was heckled in her parliamentary constituency of Amethi, and BJP legislator Suresh Pasi from Amethi had recently faced an irate mob.

He says that Amethi’s people are “emotional” and do not have a fixed or predictable voting preference, and adds that it is a misconception to think that Amethi has been a bastion of the Congress party.

Mishra also says that while Congress’s Rahul Gandhi could have done much more work in the region during his two terms as an MP, BJP’s Smriti Irani has also lagged behind on several fronts.

“But the good thing about her was that despite losing the election in 2014, she kept returning to the district. She consistently visited and met people, registering her presence,” he adds. He has also credited her for creating a rack point for urea and DAP, for the benefit of farmers.

Angad Singh, a professor at Amethi Degree College, says that the problem of stray cattle has increased since slaughterhouses were closed in Uttar Pradesh in 2017 after Yogi Adityanath became chief minister.

“The cattle enter farms, damaging crops, because they now have nowhere to go,” he says, adding that the brunt of this is mostly faced by poor farmers who cannot afford to put fencing around.

In Teekarmaafi village of Amethi, the problem of stray cattle is palpable.

Santram, a farmer is among those whose crops have been damaged by stray cattle, says, “I have lost a large part of my crop because of stray cattle.” He grows wheat in his two-acre plot, and very little wheat has been salvaged.

Purushottam of nearby Bhagatpur village is another farmer who has suffered from the same issue.

“Only big farmers can afford to put a barbed wire around. Around Rs 15,000 is required to do so, and even then there is no full guarantee,” he adds.

The condition of several roads during the BJP rule, in fact, has become better, says Seetla Mishra.

For one, Amethi is now connected to the Purvanchal Expressway, making it easier for traders as well as farmers to transport goods.

But not everyone in Amethi is beneficiary of good roads. In the Jagdishpur seat, Janapur village has put up a board which reads, “sadak nahin to vote nahin (No roads, no votes)”.

The villagers have told The Wire that there is a long-standing demand for better roads in the village, but it remains unfulfilled.

Two adjoining villages have also joined the protest and pledged to boycott elections. Only promises will not work. There has to be work,” says a villager.