Kashmir is a metaphor for our political orphaning, say Muslims in Uttar Pradesh. 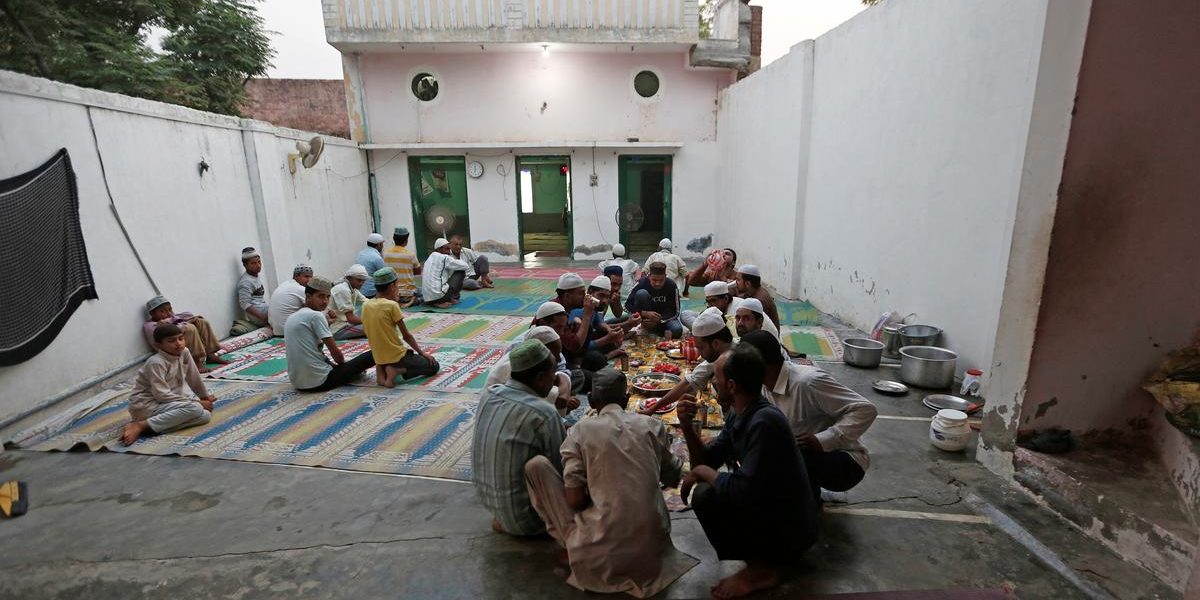 On August 9, at around 10 am, Syed Fazlul Mannan Rahmani, the imam of Lucknow’s Teele Wali Masjid, began to receive incessant calls from journalists inquiring about an event at the mosque scheduled to express solidarity with Kashmiris. Rahmani was surprised: “What event? There is nothing planned.”

Rahmani wasn’t aware of a WhatsApp invite doing the rounds in Lucknow. The invite said: “#StandWithKashmir. Teele Wali Masjid, Lucknow. Friday, 9th August, 1 pm. Join us and Stand in Solidarity with the People of Kashmir.” Muslims are enjoined by their religion to hold congregation prayers every Friday afternoon.

When Rahmani was about to enter the mosque minutes before 1:30 pm, he was met by a man who requested him to speak on Kashmir and the abrogation of Article 370 to the congregation. Rahmani told him, “You didn’t give me prior notice. I have to think about whether I should speak on the issue at all.” Rahmani did not refer to Kashmir in his khutba or sermon.

The man who had made the request to Rahmani was Srijanyogi Adiyog, the self-styled khidmatgar of the Insani Biradri, an outfit seeking to inject humanism in socio-political life. Adiyog and seven of his comrades, had presumed that Lucknow’s Muslims would be agitated, or at least apprehensive, about the events of last week – the separation of Ladakh from J&K, its demotion from being a state to just a union territory and the lockdown in the Valley.

“Maulana Rahmani was right,” Adiyog told me. “I should have informed him in advance.” Nevertheless, after the Friday prayer, he and others met the devotees coming out of the mosque. “One of them said that he did not want to engage in politics. It sparked off a discussion between us and them on Kashmir – and politics.”

People may find it curious that Adiyog presumed Muslims would feel dismayed or agitated over the Kashmir issue. Muslims in the Hindi heartland have seldom identified with their co-religionists in Kashmir, and their movement for autonomy or even independence. The possibility of Islam uniting them is offset by linguistic and cultural differences between the Muslims of north India and those in Kashmir.

These differences have been further exacerbated because Kashmiri Muslims view their political destiny differently from how Muslims in the Hindi heartland do. The latter consider India their homeland; they or their ancestors chose India over Pakistan at the time of the Partition.

By contrast, for a large segment of Kashmiri Muslims, history is an inexorable movement of time to help them realise their quest of deciding whether to accede to India or Pakistan – or become independent.

These contradictory world views create separate interests and perceptions about the future. These, in turn, have disconnected Muslims in the Hindi heartland from those in Kashmir.

Adiyog agrees that the Muslims of Uttar Pradesh, for most part of India’s history, did not identify with the cause of Kashmiri Muslims. “But that is changing because the Muslims here have grave apprehensions about their own future.”

I spoke to 10 Muslims in Uttar Pradesh, all of them rooted in their community. They all echoed Adiyog’s views – that the fear emanating from Hindutva’s propensity to target Muslims is increasingly overshadowing regional, linguistic, caste and sectarian differences existing in the community.

Ever since the Narendra Modi government swept to power in 2014, Muslims have seen the Rashtriya Swayamsevak Sangh and its affiliates rake up one issue after another to target the community. Think mob lynching, the politics over the cow, ‘love jihad, ‘ghar wapsi‘, triple talaq, recent amendments to the Unlawful Activities (Prevention) Act, the debate over the National Register of Citizens in Assam, and the ongoing hearing in the Ayodhya dispute in the Supreme Court.

“The Muslims of north India have started to identify with Kashmiri Muslims because they have come to realise that their Muslimness is a pretext for the Sangh to target the community,” said Mohammad Shoaib, president of the Rihai Manch, which has widened its ambit from fighting legal cases for Muslims accused of terrorism to include those from subaltern groups facing the onslaught of the state.

“Kashmir, too, has been turned into a Hindu-Muslim issue. The Sangh has been resorting to the politics of polarisation because it wants to divert people’s attention and prevent them from mobilising on economic issues,” Shoaib said.

An academic at an engineering institute in Lucknow said, “What the BJP has done in Kashmir is aimed at demoralising Muslims all over India.” After first going on the record, he called back hours later to request that he not be named – a testament to the fear gripping Uttar Pradesh’s Muslims.

The clerics, though, seem out of sync with the predominant sentiments of the community. For instance, Maulana Rahmani backs the abrogation of Article 370, arguing that Prime Minister Narendra Modi must have taken this measure for Kashmir’s development and prosperity.

“But yes, the sudden manner in which it was done has shocked the people. The people of Kashmir should have been taken into confidence,” Rahmani said. He felt the country’s communitarian ambience has been vitiated. “India is a bouquet of flowers,” he said. “It is what gives India its beauty.”

Also in Lucknow is the Shahi Asafi Masjid, where the Shias offer prayers. On August 9, its imam, Kalbe Jawad, spoke in favour of the abrogation of Article 370 in his khutba. Jawad told me, “In my khutba, I said fear has spread in Kashmir because of Pakistan sponsoring terrorism in the state, and that Modi and [Amit] Shah have promised the restoration of statehood to J&K after some time. I told the congregation that we cannot support Kashmiris until they begin to consider themselves Indians.”

Nevertheless, in the dua (supplication) offered at the end of the congregation prayer, Jawad did ask for “Allah to help Kashmiris overcome their misery and for peace be restored to J&K.”  This was, as one person said, Jawad’s concession to the overwhelming feeling among the Shias that the Kashmiris have been wronged and should be supported.

“We don’t agree with Jawad’s perception that Kashmiris don’t think of themselves as Indian,” said Syed Zulfiquar, a human rights activist. “It seemed as though Jawad’s khutba was written at the RSS headquarters in Nagpur.”

Hussain Afsar, who is the editor of the Sunday edition of the Daily Aag as well as of its website, felt social media was a crucial factor in driving the Muslims of Uttar Pradesh to identify with Kashmiri Muslims. “There were posts about people getting an opportunity to buy land cheap in the Valley. There were filthy posts about ‘fair’ Kashmiri Muslim girls.”

As in war so in social media, the woman’s body became the site of marking victory and defeat. The imaginary enslavement of Muslim women was experienced as a deliberate humiliation of the community. “The emotion of Muslims is like a corked bottle,” Afsar said. “It is better they protest, in a democratic way, within the framework of the constitution.”

But protests against the Modi government’s measures on Kashmir will likely widen the chasm between communities and consolidate the Hindutva constituency. Shoaib, however, argued, “Can they polarise even further than what they have already done?”

For Uttar Pradesh’s Muslims, Kashmir has become a metaphor for their bleak fate in the high noon of Hindutva. This has prompted the Muslim intelligentsia to ponder over the strategies the community should pursue for its security.

At one end of the political spectrum is Tariq Durrani, a businessman who was away in Dubai for 22 years and is now engaged in what he calls social work. He thinks Muslims should withdraw from politics.

“The more we oppose them [Hindutva forces], the more they will oppose us,” Durrani said. Muslims, he said, should draw inspiration from the Quran and engage in character-building. “The Quran asks Muslims to be of use to their society. That is what they should focus on,” Durrani said. This will turn them into social leaders and bring a moral equity hard to ignore, he said.

At the other end of the political spectrum are those who are deeply disappointed at the void in opposition politics and the absence of a platform to protest from. The engineering institute’s academic said, “What is the point of voting for the Bahujan Samaj Party, Samajwadi Party or Congress? Muslims should think of an alternative political leadership, a Muslim party.”

His view is that once the mainstream parties realise they won’t get Muslim votes, and therefore can’t win, they will become sensitive to the anguish and interests of the religious minorities. “Like Mayawati’s BSP, a Muslim party can then transfer votes to whichever party it enters into an alliance with.” In other words, the academic thinks political parties will stop taking Muslims and their votes for granted.

This has been the political line of Asaduddin Owaisi, the president of the All India Majlis-e-Ittehadul Muslimeen, whose popularity in the community is rising, even among those who don’t vote for him. The academic said, “He is educated, reasonable and speaks in the constitutional language.”

Obviously, the very presence of a strong or viable Muslim party will also boost Hindutva and the BJP.  “Hindutva can’t be fought with the Hindus,” said Adiyog. He said his outfit would explain to Hindus the fear and angst of Muslims, and the Modi government’s betrayal of the Kashmiris.