UP Elections: As Gorakhpur Goes to Polls, Adityanath Faces Stiff Competition in His 'Bastion'

While Gorakhpur is often portrayed as a ‘pro-Yogi saffron stronghold’, various fault lines have existed in Adityanath’s supposed bastion for a long time.

In the past, roadshows by opposition parties in Gorakhpur have been rare, however, this time around, at least three major roadshows (including that of the Samajwadi Party pictured above) took place. Photo: Facebook/ samajwadiparty.

Gorakhpur: Contesting his maiden assembly election, Uttar Pradesh chief minister Yogi Adityanath may not perceive any real challenge on his home turf, Gorakhpur. However, steering the Bharatiya Janata Party (BJP) to a repeat of its thumping victory in the 2017 assembly polls on all nine seats of the district is indeed a tall order.

By the time the Model Code of Conduct (MCC) came into force in the assembly constituency and poll campaigns were halted, three major roadshows had been held in Gorakhpur. Samajwadi Party (SP) president Akhilesh Yadav held a rally on February 27, while Adityanath and Azad Samaj Party president Chandra Shekhar Aazad held their rallies on February 28.

Roadshows being held by political figures other than Adityanath had become a rarity in Gorakhpur for some time. But the fact that three massive political rallies were held this year portends a change, not only in Gorakhpur, but in Uttar Pradesh’s politics as a whole.

After having recently defected from the Bahujan Samaj Party (BSP) to join the SP, members of the Tiwari family, including former MP Bhishma Shankar Tiwari, eldest son of former minister Harishankar Tiwari; and his nephew, former chairman of the Legislative Council Ganesh Shankar Pandey, were among the prominent faces on the bus.

Before the roadshow, Yadav had also addressed a rally in support of Vinay Shankar Tiwari, Harishankar’s other son, in Gorakhpur’s Chillupar area. Yadav’s convoy halted at Hata (Harishankar Tiwari’s house), where slogans were raised.

Towards the end of the roadshow at Kali Mandir Tiraha, Shubhavati Shukla, the SP candidate contesting against Adityanath from Gorakhpur Urban, and her two sons mounted the roof of the bus. Yadav offered his condolences to the Shuklas (who are the family of the late Upendra Dutt Shukla), which was lauded by his supporters on social media the next day. 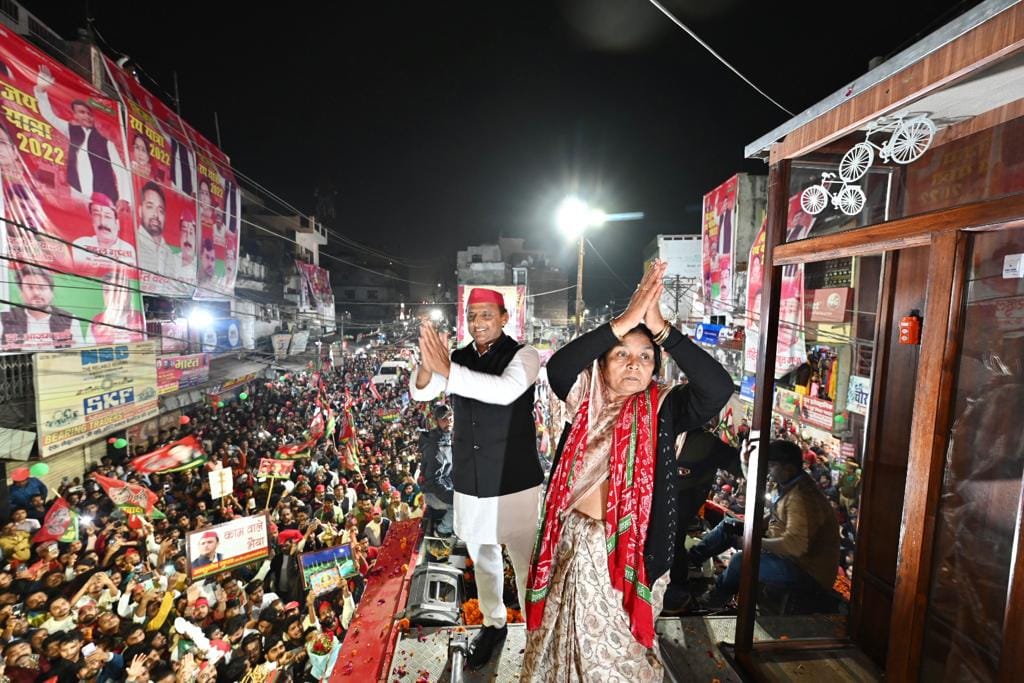 With this roadshow, the SP attempted to reach out to Brahmin voters in Gorakhpur and adjoining districts with the message that in its new avatar, the SP (often construed as a Yadav-oriented party) has a lot of room for the ‘upper’ castes.

Azad Samaj Party president Chandra Shekhar Aazad, who is also contesting from the Gorakhpur Urban assembly constituency, canvassed vigorously during the last few days of campaining. Thousands of his supporters poured in from other districts and conducted a door-to-door campaign for him. A massive crowd was also seen at his roadshow.

However, the absence of local Dalit leaders and organisations from Aazad’s electoral campaign was surprising, choosing to largely support the BSP instead. According to a Bhim Army leader, there was a lack of proper communication with the local organisations. Local Dalit leaders, on the other hand, claimed that Aazad lacks ‘seriousness’ in his politics.

Chief minister Adityanath’s roadshow was also at variance with his previous campaigns. During the 2017 assembly elections and 2019 Lok Sabha polls, Amit Shah was seen accompanying Adityanath to rallies, however, he was missing from Adityanath’s roadshow this year, despite visiting adjoining districts of Gorakhpur the same day and addressed rallies there. 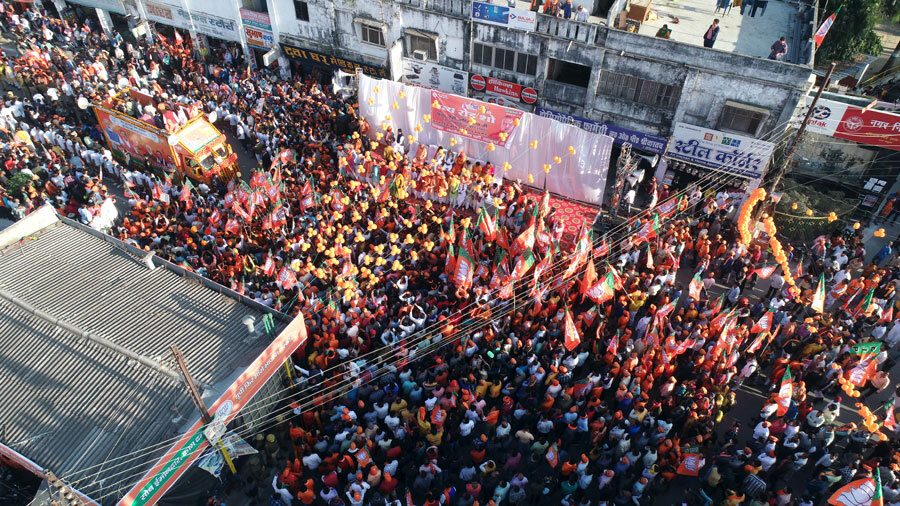 Shah did accompany Adityanath on the day of nomination, but the course of Adityanath’s convoy on the day of the roadshow was completely opposite to Shah’s. The former’s cavalcade passed through trader-dominated neighbourhoods and narrow streets of the city.

During the last week of campaigning in Gorakhpur, not only political analysts but even common people took note of this and speculated upon the fresh hoardings and flex cut-outs bearing only Narendra Modi’s face, put up at every nook of the city with the slogan, ‘UP Mange Phir BJP Sarkar’ (UP asks for a BJP government once again).

Adityanath’s campaign in Gorakhpur Urban was quite well-organised. Along with the BJP, members of the Hindu Yuva Vahini (HYV) also ran a door-to-door campaign and distributed promotional material.

Before every election, Adityanath’s supporters customarily distribute a booklet of his achievements. This year, the booklet was titled ‘Kaam keh rahe hain sahi chuna tha; log keh rahe hain sahi chunenge. Mann bana chuki janta yahi chuna tha, yahi chunenge (The work is saying the choice was right; the people are saying they will choose what is right. The public has made up its mind, they chose this earlier, they will choose this again). The booklet contains 28 articles hailing Adityanath and his government.

The BSP, meanwhile, has nominated fresh candidates on all seats. Not all BSP candidates are strong enough to bolster the party’s vote-bank or even retain it. However, the party’s presence is bound to turn this election into a triangular contest.

In the Lok Sabha elections of 2014 and 2019, the BJP also captured both the parliamentary seats in the district. However, the BJP’s drubbing in the Gorakhpur Lok Sabha by-election in 2018, soon after Adityanath became chief minister, came as a jolt to the party. The by-poll outcome exposed the fault lines in Adityanath’s bastion for the first time.

The fault lines have existed in Gorakhpur’s political arena for a long time, but the mainstream media turned a blind eye towards them and portrayed the district as a ‘pro-right wing, pro-Yogi, saffron stronghold’.

Analysing the poll results of Gorakhpur district over the last two decades, one realises that, except for in the 2014 Lok Sabha elections and the 2017 assembly elections, Dalit-backward politics has been the frontrunner on all seats, except for Gorakhpur Urban, and that the BSP has been the top contender. These results markedly point out that the district is a major hub of Dalit-backward politics, rather than being ‘Adityanath’s bastion’ or a ‘Saffron land’.

In 2002, the BSP bagged four of the nine assembly seats in Gorakhpur, while the SP emerged victorious on two. The All India Democratic Congress and the BJP (Hindu Mahasabha) got one seat each and the final seat went to an independent candidate.

In 2007, the BSP again won four seats, while the SP bagged one seat and the BJP two. The Congress also won a single seat while one independent candidate was victorious.

In 2012, the BSP, once again, won four seats and the SP and the Nationalist Congress Party (NCP) got one seat each. However, the BJP managed to win three seats that time.

In 2017, the BSP’s tally fell to one seat and the SP scored a duck, despite contesting the elections in alliance with the Congress. A visible change in the polls was that the BSP, which had performed well in every election, came second on only two seats while the SP-Congress came second on five seats.

Similarly, a look at Lok Sabha election results reveals that the Gorakhpur parliamentary seat has been with the BJP since 1989, though the tally in the Bansgaon parliamentary constituency has not always been in favour of the BJP. However, the BJP has won the seat in the last two elections.

While the opposition already poses a daunting challenge, Adityanath has also been put in a quandary because of the Nishad Party, a BJP ally. The Nishad Party had laid claim to several seats in Gorakhpur, however, Adityanath cleverly managed to restrict it to only one seat; Chauri Chaura, where the party fielded Shravan Nishad, son of Nishad Party president Sanjay Nishad.

As Ajay Kumar Singh ‘Tappu’, a rebel leader of the BJP, is getting a lot of support from the BJP camp, Shravan Nishad apparently faces an uphill task in the constituency. Tappu is considered a close associate of Adityanath and his supporters claim to have the latter’s blessings.

Also read: Known for Its Meteoric Rise, Is UP’s Nishad Party Set for Success This Time?

In an attempt to get his son out of trouble, Sanjay Nishad got so caught up in the poll campaign in Chauri Chaura that he was unable to focus on promoting the BJP in other areas. The candidates of the SP and Mukesh Sahni’s Vikassheel Insan Party (VIP), both hailing from the Nishad community, are expected to make it a tough contest. Meanwhile, Nishad voters appear confused and in most Nishad-dominated areas, the candidates from the community seem to have an edge.

Pressure on the BJP to win big

The BJP has won the Gorakhpur Urban assembly constituency in the last eight elections. With each victory, the party’s margin, too, kept broadening. In 2017, its victory margin was more than 60,000.

After delimitation in 2012, Gorakhpur Urban became a highly favourable seat for the BJP as the minority and backward castes – especially a large section of the Nishad community – came under the Gorakhpur Rural assembly seat.

The Gorakhpur Urban seat has a sizeable population of Vaishya and Kayastha voters who have traditionally been voting for the BJP. Apart from the backward classes, the BJP has also made inroads among the Dalit voters while the SP has put a lot of emphasis on wooing Brahmin voters this time around.

Meanwhile, Kayastha voters are clearly dissatisfied with the lack of representation of the community within the BJP – a point fiercely raised by Aam Aadmi Party candidate Vijay Kumar Srivastava. Despite this, however, there is no sign of Kayastha voters drifting away from the BJP.

The major defect with the opposition parties is that they swing into action only before elections and pick candidates on the basis of caste equations in order to breach the BJP’s fortress. Once the polls are over, the parties go into ‘invisible’ mode again. This is why they have failed to create a rift in the BJP’s camp. Opposition parties have been contesting in the district only nominally and this year, the strategy has been no different.

In assembly constituencies other than Gorakhpur Urban, the situation is completely different. The SP and the BSP have both fielded strong candidates who are always politically active. Apart from Gorakhpur Urban, the BJP is in a direct face-off with the SP on seven seats, while the BSP has a strong presence on one seat.

This year, the SP is leaving no stone unturned in trying to narrow Adityanath’s victory margin by bagging more votes than the previous election, while the BJP and HYV are hoping for a ‘big win’.

Amid such high hopes, the BJP’s failure to record a thumping victory on most of the nine seats in Gorakhpur, if not all of them, is bound to eclipse Adityanath’s victory on his home turf.