The bizarre twist of justice in the Unnao case and the victim's long fight to file an FIR against a BJP MLA is an unabashed display of government apathy and the complicity of the police in the state.

New Delhi: In January, Uttar Pradesh chief minister Yogi Adityanath declared that there is no place for  lawlessness in the state. “Kisi ke bhi jeevan se khilwaad karne waale ka jeevan hum kharaab kar denge (We will make miserable the lives of those who try to disrupt anyone’s life),” he said.

However, reality doesn’t bear testimony to the priest-turned-chief minister’s proclamation. The apathy of the state and the complicity of the police are on unabashed display in the incident of gangrape in Unnao and the death in police custody of the survivor’s father.

A deaf government, a feisty survivor

In June 2017, two months after the BJP came to power in UP, a 17-year-old girl from Makhi village in Unnao alleged that she was kidnapped when she went looking for a job and gangraped for more than a week by a ruling party MLA – Kuldeep Singh Sengar – and his accomplices, including his brother Atul Singh. However, the case registered by the Unnao police did not name the MLA as an accused. It was said that the survivor and her family were thrown out of the Makhi police station.

Realising that the local police administration was under the full control of the Sengar family, the survivor wrote repeatedly to the chief minister’s office and senior police officers in the state demanding that rape charges be framed against Sengar.

That, however, did not happen. Instead, the family alleged they were threatened by Sengar to not pursue the case.

After months of running around – and failing – to get rape charges framed against Sengar, the survivor’s mother had to eventually approach the chief judicial magistrate to finally get an FIR lodged against the BJP MLA.

Despite this, the Unnao police took no action in the case. The Sengar family enjoyed such impunity that they continued to threaten the survivor’s family. On April 3, the survivor’s father, Surendra Singh, was brutally assaulted by Sengar’s brother, Atul Singh, and accomplices, in daylight. Videos later emerged showing the severity of the beating that was meted out to the survivor’s father. Newslaundry reported, “They dragged him out on gunpoint and tied Surendra to a tree. They punched him, thrashed him with sticks, belts and iron rods in front of his family and villagers till he fell unconscious.”

The police did file an FIR charging five men with assault, but it excluded the MLA’s brother despite the fact that the written complaint submitted by the family to the police mentioned Atul Singh’s name. In another video that has emerged, the father can also be heard naming the MLA’s brother as the one who assaulted him.

However, in a bizarre twist of justice, the police arrested the survivor’s father himself on charges of illegal possession of firearms. The girl’s family feared that he might be killed in custody. He was taken to hospital where doctors did not find the need to admit him despite the severity of his injuries, and he was sent to jail.

Exasperated, on April 8, the survivor and her family attempted to commit suicide by self-immolation outside Adityanath’s residence in Lucknow. “I was raped. I have been running pillar to post for the last one year but no one is listening to me. I want to see all of them arrested, otherwise I will kill myself,” The Indian Express quoted the survivor. 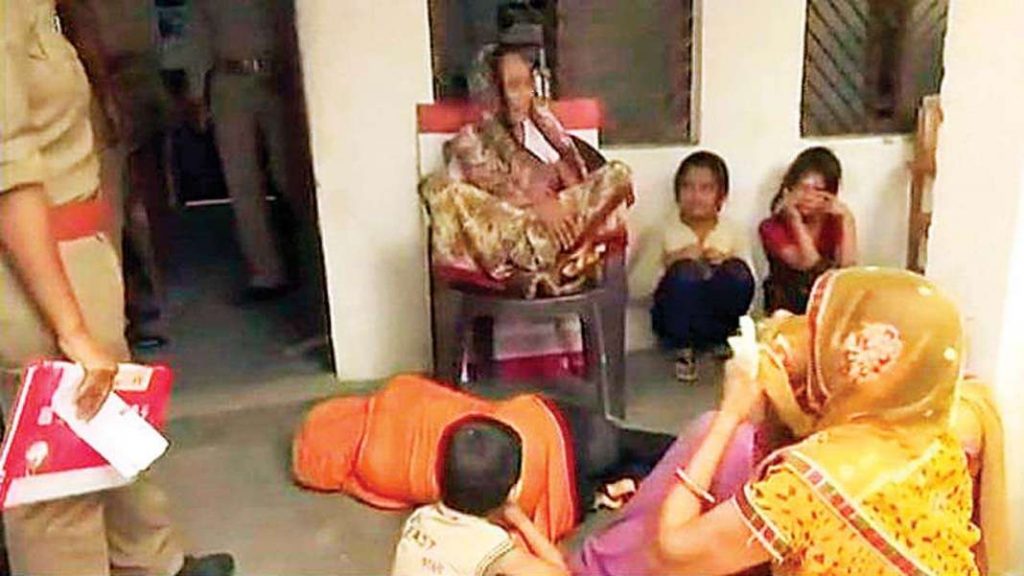 After the survivor attempted to kill herself outside Yogi Adityanath’s residence in Lucknow, she and her family were taken to the police station. Credit: Twitter

A day later, the survivor’s father died in police custody because of ‘blood poisoning due to perforation of colon’ as per the post-mortem report. The report also listed multiple injuries and abrasions around his arms, thighs, buttocks, knees and abdomen. This was after the police personnel had denied accusations of torture.

It was only after the death of the survivor’s father and widespread outrage that some wheels in UP’s justice system began to move and the BJP MLA’s brother was arrested. The chief minister was forced to order a magisterial inquiry. A Special Investigation Team was also formed to look into the case.

The MLA himself, who the survivor has repeatedly accused of raping her in June 2017, continues to be a free man as of April 12 and was seen walking in to meet Adityanath with a hint of swagger and a wide smile.

As the UP government continued to shield its MLA, the Allahabad high court, on April 11, took suo moto cognizance of the incident of gang-rape and the subsequent death of the survivor’s father after being assaulted by the MLA’s brother. Till, April 11, the Adityanath-led UP government, meanwhile, had only ‘summoned’ the BJP MLA who continues to be a free man. None of the FIRs named him.

It was only on the morning of April 12, three days after the father succumbed to his injuries and four days after the survivor tried to commit suicide outside the chief minister’s house, that the UP government registered a case against the MLA for kidnapping, rape and under the Protection of Children from Sexual Offences Act (POCSO). The Adityanath government has also sought a CBI probe in the case.

However, the MLA, at the time of publication of this story, had still not been arrested.

“Why should we arrest him? We have mentioned his name in the FIR (First Information Report). Now, CBI can take over the investigation,” UP’s police chief, O.P. Singh, told reporter on the morning of April 12. He said that the case has been transferred to the CBI but refuted allegations of protecting the MLA. He said that the UP police was only trying to hear both sides but did not appear to acknowledge the long fight the survivor waged only to get a FIR lodged.

The survivor, though, has been ‘confined’ to a hotel room in Unnao ‘without water’. “I have been confined to this hotel room. They are not even giving us water. We are told we can’t go outside,” the survivor is reported to have said.

Despite the DGP’s assurances, the UP government on 12 April did a complete volte face at the Allahabad high court. Firstpost reported the following:

“Advocate General Raghvendra Singh (appearing for the government) told the court that the investigating agency will arrest Sengar if sufficient evidence is found against him. The court was, however, not convinced with the argument and the judge asked Singh whether this was a standard norm followed in all cases. Singh replied saying that the investigating officer takes a call on arrest on a case to case basis depending on the merit of the case.”

Who is Kuldeep Singh Sengar?

The MLA from Bangermau constituency in Unnao was first elected in 2002 on a Bahujan Samaj Party (BSP) ticket from Unnao (City) seat, after having started his political career with the Congress. Then he switched sides and won different seats in Unnao from Samajwadi Party. Ahead of 2017 assembly elections, he shifted to the BJP and won again.

Various accounts say that the Sengar family is dreaded in Unnao. From illegal sand mining and large-scale unlawful constructions, Kuldeep is seen as spearheading a variety of illegitimate activities in Unnao. Many also allege that his family runs an extortion racket and hijacks most of the government tenders by force.

While Kuldeep gradually transformed into a bahubali (political strongman) and exercised his political influence, he outsourced most of his openly illegal activities to his brother Atul. He has also managed to get his family members, including his wife, elected to various local administrative bodies.

Early in his political career, he and his brother, in 2004, were also accused of firing at the then ADM Ram Lal Verma, who tried to keep a tab at illegal mining activities allegedly controlled by Sengars. Similarly, he is also supposed to have beaten up a journalist publicly when he reported on the same.

Despite this long history-sheet, BJP, which claimed to improve the law and order situation, thought it fit to include Sengar in its ranks.

The Unnao rape case has foregrounded the administrative failures of the UP government like nothing else. Only a few days back, Dalit leaders, including those in the BJP, made their discomfort visible to the BJP leadership over the way the state police booked hundreds of innocent Dalit young men on false charges soon after the community groups called for a nation-wide bandh over dilution of SC/ST Act. While encounters under Adityanath have risen drastically, the legitimate mechanisms of justice, assured to citizens by the constitution, are slowly disintegrating, many political observers say.

It all started when the UP government was seen to selectively use the administrative system in BJP’s favour. Early this year, it was reported that hundreds of cases against BJP leaders, including those against the chief minister, were withdrawn on official orders. The most recent such instance was the rape case that was withdrawn against Swami Chinmayanand, senior BJP leader and a former union minister in Atal Bihari Vajpayee government.

At the same time, the number of communal riots have increased greatly in the last one year, so much so that the state finished at the top when such riots were counted in India. The chief minister even penalised those bureaucrats who appear to be acting with independence. For instance, an inquiry was set up against the Bareilly MP who had posted about the role of Hindutva activists in engineering riots. He also failed to initiate action against BJP MP Raghav Lakhanpal, who last year during the Saharanpur violence had held the district magistrate, Luv Kumar, captive. Kumar was also punished as he was soon transferred into a less-important position.

The furore over the Unnao rape case has come at a time when the opposition parties are getting their houses in order. BSP’s Mayawati, Akhilesh Yadav of SP and even Rahul Gandhi have come together to launch a scathing attack on the state government. In reminding people of several such cases of sexual assault and a growing upper caste dominance over the last one year, they have successfully combined issues of gender and political injustices to confront the UP government ahead of next year’s general polls.

Even before Adityanath declared his repugnance towards lawlessness before the assembly elections last year, it was Narendra Modi, during his prime ministerial campaign in Hardoi, UP, who had thumped his chest while announcing that even BJP legislators and those in the National Democratic Alliance will not be spared if they are found with criminal antecedence. The high-handed handling of the Unnao gangrape case, in which the government machinery organised itself to openly protect the accused and intimidate the survivor and her family, and many such cases over the last one year, however, indicate otherwise.