The Hindu right-wing thinks it has the ability and power to rewrite history and is attempting to replace the truth with something that suits them better, truth be damned. 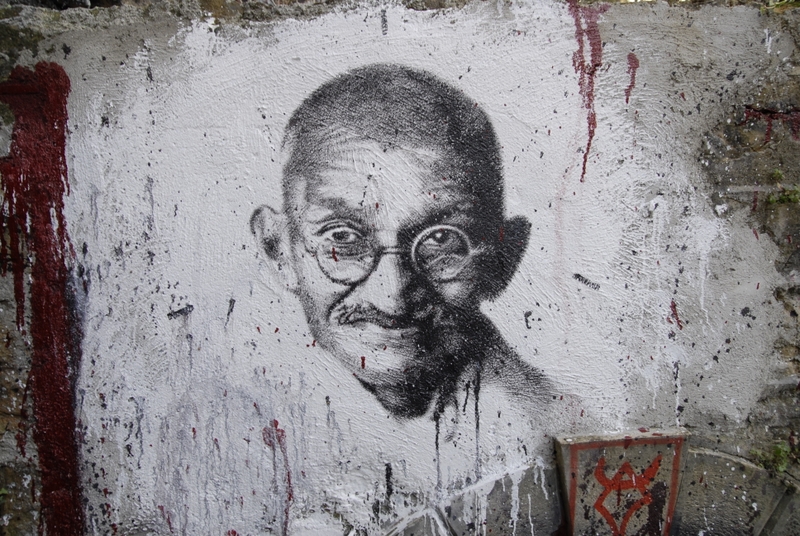 This is not the first time an attempt is being made to sow disinformation and create confusion about the Gandhi murder. Credit: thierry ehrmann/Flickr CC BY 2.0

The ideology that supported and inspired Nathuram Godse has launched a concerted campaign to justify Mahatma Gandhi’s murder. For seven decades, the proponents of this ideology have orchestrated their lies so successfully that a large segment of the Indian populace may even believe them.

Now they have taken it to the next level, to spread doubts about the murder itself. The Supreme Court recently heard a plea requesting a reinvestigation into Gandhi’s murder. The Court has appointed an amicus curiae and has set the next hearing for October 30. I am surprised the court did not dismiss such a blatantly frivolous plea out of hand.

This is not the first time an attempt is being made to sow disinformation and create confusion about the Gandhi murder. This is a part of a well thought out strategy of the Hindu right-wing, which provided the ideological inspiration to his murderers.

Last year a petition was filed in the Bombay high court seeking a reopening of the investigation into Gandhi’s murder. The petitioner – Pankaj Phadnis, a researcher with Abhinav Bharat – alleged that there was another shooter, that there was a fourth bullet and alluded to the presence of a mysterious foreigner.

Fortunately the Bombay high court refused to admit the plea and dismissed it out of hand, consigning it promptly to where it belonged, the trash basket. The petitioner is a self confessed devotee of Veer Savarkar and wants to clear his name. The petition further requested the court to invalidate the findings of the Justice Kapur Commission report of 1969 and to order a fresh investigation into Gandhi’s murder. But now the Supreme Court has admitted another petition by Phadnis.

It is important to know that the Kapur Commission had, through its investigation, established a link between the RSS and Gandhi’s murder and also had shown evidence of Savarkar’s involvement in the murder conspiracy, though he was eventually let off. Since then, the existence of the Kapur Commission report has been a cause of great anxiety to the Sangh parivaar and Savarkarites.

The dismissed petition in the Bombay high court and the petition heard by the Supreme Court are steps in this strategy to discredit contemporary history and then replace it by their own fantasies passing off as history.

The petition heard by the Supreme Court alleges that there was a second gunman, present at Birla House on the evening of January 30, 1948, who allegedly fired the fatal shot that evening, the fourth round fired at Gandhi, which resulted in his death. This attempts to suggest that the three shots fired at Gandhi by Godse from a range of two-and-a-half feet and which all hit Gandhi in the chest in a radius of less than three inches from a 9 mm gun, did not kill him. That evening there were more than a thousand people present at Birla House and yet the second gunman mysteriously fired at Gandhi unnoticed and got away without anyone else noticing his presence, a totally invisible man. Yes Godse’s accomplices N.D. Apte and Vishnu Ramkrishna Karkare did manage to get away after the murder, but that was because they did not participate in the actual murder. They were merely Godse’s wingmen, unarmed and there to ensure that he was not impeded as he approached Gandhi. They were also to ensure that if possible they would all make good their escape after the deed. Their plans went awry when Raghu Mali of the Birla House grappled and disarmed Godse after the murder; in the ensuing confusion Apte and Karkare escaped. Nobody saw or heard the second gunman, because there wasn’t one. 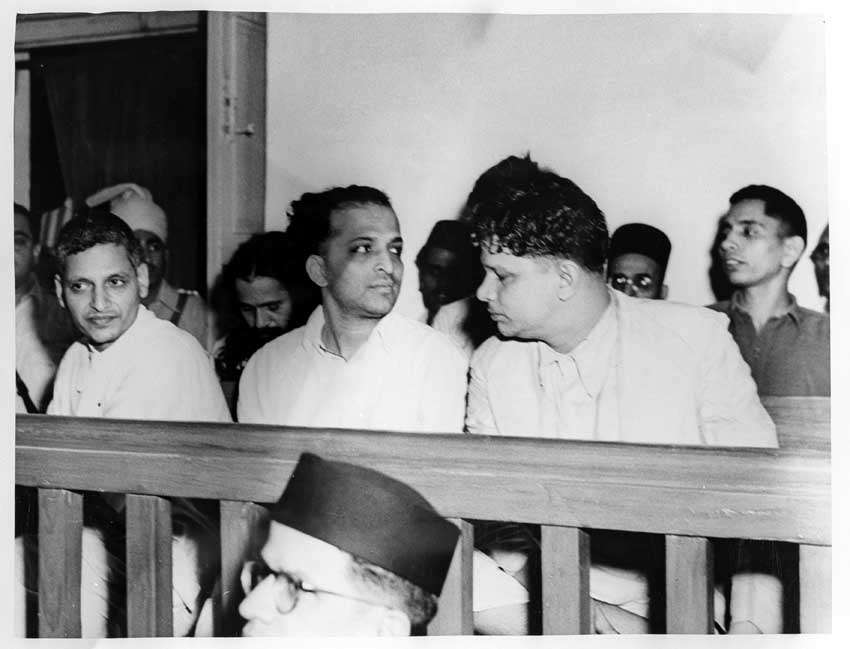 The petition claims that there was a fourth bullet, fired by the second gunman which actually killed Gandhi. From what I read in press reports, the petitioner has cited the eyewitness account of Manuben who has written that after Gandhi’s body was carried into Birla House and while it was being bathed and cleaned they discovered a bullet entangled in the folds of the shawl he had draped on his torso. This, the petitioner claims, was the mysterious fourth bullet. The Gandhi murder investigation has confirmed that three shots were fired, which accounts for three entry wounds inflicted on his chest. There were two exit wounds on his back where two of the bullets went right through his frail body.

Of the three bullets fired at Gandhi, one flew up to almost ten feet behind him and was recovered by the police later from the flower patch fringing the rear lawns of Birla House. One bullet, which remained in Bapu’s body, was recovered as a lump of melted lead from the funeral pyre at Raj Ghat while the ashes were being gathered after the funeral and the third bullet was the one that was recovered from the folds of his shawl while his body was being bathed. The fourth bullet was never discovered because it did not exist.

There is an interesting aside to the bullet that was recovered from the folds of the shawl. Devdas Gandhi, Gandhi’s youngest son, took the bullet later that evening to the Tughlaq Road police station where the FIR was filed. Godse, the murderer, was held in a cell at the Tughlaq Road station. The cell is situated such that anyone interned in it can see people coming and going. Fortunately it still exists as it had in 1948. I have seen it while researching my book, Let’s Kill Gandhi!‘. When Devdas approached the Tughlaq Road police station, Godse saw him and demanded to meet him, making a scene when his demand was ignored.

The so-called ‘fourth bullet’ that caused the fatality, as claimed by the petitioner, was in fact the second or third bullet fired by Godse that evening. The three cumulatively or one of them individually caused Gandhi’s death. All three bullets are accounted for. There is no evidence of a fourth bullet because there wasn’t one.

During the post murder investigations, a bullet was recovered from the Parchure Wada in Gwalior, which was shown to the police by Apte. It was tested by the forensic laboratory to ascertain whether it was fired from the gun used to murder Gandhi, but proved to be a different bore than the 9 mm Berreta used by Godse.

The story of the 9 mm Beretta

The petitioner has also alleged that there were two Beretta guns bearing the same serial number (606824). Yes, two Berretta guns bearing the same serial number do exist and they are both in the National Gandhi Museum at Raj Ghat. One is the original murder weapon, which, along with other relics from the murder, were handed over to the Gandhi Smarak Nidhi and which resulted in the formation of the National Gandhi Museum where all these are stored. The other is the replica of the murder weapon which that made to be kept on display from time to time at the museum. There was no other Beretta of the same serial number.

The story of how this weapon got into the hands of Godse is interesting. Till January 28, 1948, the Godse-Apte gang did not have a reliable weapon to murder Gandhi. Their attempt on January 20 to kill him had failed despite them possessing three revolvers that day, because none of the weapons had proven reliable. They also discovered on the afternoon of January 20 that they had the wrong calibre ammunition for two of the guns and one which was a military issue revolver in the possession of Gopal Godse jammed and was useless. From January 21–28 they had gone to all their sources looking for a gun but failed to acquire a weapon. Gwalior at the time was a thriving centre of the illicit gun trade, so they ended up there.

Dattatreya Parchure, a doctor and a member of the Akhil Bharatiya Hindu Mahasabha, was an ardent Savarkarite and known to both Nathuram and Apte; they were certain he would help. They landed up at his home in the early hours of January 28. They knew he possessed a capable gun himself and initially asked for it. Parchure refused. But, being an ardent Savarkar bhakt he agreed to get them one. He assigned the task to his subordinate Gangadhar Dandavate who was later accused of handing over the weapon to Godse.

By the evening of January 28, Dandavate reported back that he had found a suitable weapon and it was available with a known gun runner, Jagdish Prasad Goel. Godse and Apte struck a deal with Goel and got the gun from him for Rs 500 and the revolver they could not fire. Parchure showed them how to fire the gun in the backyard of his wada and this was the bullet recovered by the police later but neither Nathuram nor Apte could manage to fire it. This is how the murder weapon with a full magazine and extra seven rounds came into the possession of the murderers.

The Berreta 9 mm semi automatic (serial number 606824) was one of the most popular murder weapons for close-range work. It was the weapon of choice of assassins all over the world. This gun was specially made as a limited edition gun by the Berretta Co, for the officers serving in Mussolini’s army and so even today it is called the ‘Fascist Special’. An officer in Mussolini’s army, which invaded Abyssinia in North Africa, was carrying the gun. Mussolini’s army was defeated by the allied forces, in this case the 4th Gwalior Infantry, and its commanding officer Lieutenant Col V.V. Joshi accepted it as a symbol of surrender from the officer of Mussolini’s army and became a cherished war trophy. After the war, Joshi brought it back with him to Gwalior, where he was appointed to the court of the then ruler of Gwalior, Jiyajirao Scindia.

It was never investigated how a trophy of war in the possession of a senior officer serving in the Gwalior fell into the hands of a gunrunner and from him reached Gandhi’s murderers. Parchure was a co-accused in the Gandhi murder. He was acquitted by the Punjab high court in the appeal because he was technically a British citizen at the time of his arrest and since extradition proceedings weren’t carried out at the time of his arrest it was declared to be illegal and so he could not be convicted despite irrefutable evidence and his own voluntary confession.

These are the facts about the Gandhi murder that are inconvenient for fakers. Now they think they have the ability and power to rewrite history and so they are attempting to replace the truth by something that suits them better. They have successfully trivialised ancient history, and now they will trivialise and discredit contemporary history and replace it with a narrative more suitable to their needs. The truth be damned.

Tushar Gandhi is the great-grandson of Mahatma Gandhi and author of the book Let’s Kill Gandhi!