In the national capital to draw attention to the Biplab Deb government's violent suppression of opposition efforts and media freedom, Manik Sarkar said all "democratic-minded citizens" were in danger. 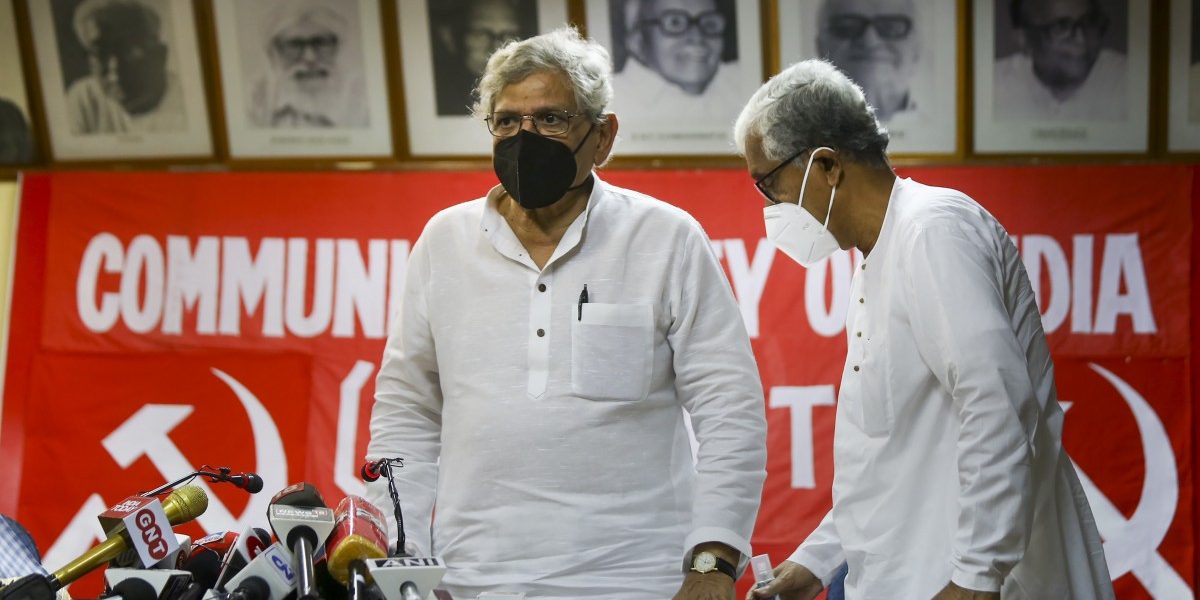 CPI(M) leader Sitaram Yechuri with former Tripura CM Manik Sarkar during a press conference on the recent spate of attacks on the CPI(M), the Left parties and the media in Tripura, at party head office in New Delhi, Tuesday, September 14, 2021. Photo: PTI

New Delhi: In the national capital to highlight the incessant and violent attacks on the opposition in his state, the four-time Left Front chief minister of Tripura Manik Sarkar said that the ruling Bharatiya Janata Party is turning the north-eastern state into a “laboratory” to establish a “one-party, dictatorial, fascistic regime”.

Sarkar, who was most recently attacked during his visit to Khatalia on September 6, 2021 was similarly assaulted twice before, allegedly by BJP workers.

He said that the BJP in Tripura has launched an attack on all “democratic-minded, secular and peace-loving citizens”, and the issue of the Left Front coming under such an assault, therefore, does not concern only Tripura.

He alleged that the Left Front’s 16 MLAs are being prevented from visiting their respective constituencies.

“The situation is dire. Even I was stopped from visiting various parts of the state and my own constituency at least 15 times,” said Sarkar, who was most recently prevented from addressing a rally on September 6. He added that while all opposition parties, including the Congress and the Trinamool Congress, have come under attack, the Left Front, especially the Communist Party of India (Marxist) has borne the brunt of the BJP’s assault.

“In Tripura, I am forced to say, the constitution of India doesn’t work,” Sarkar told members of the press.

He said that the BJP’s attacks were planned to stop the opposition from carrying out any democratic activity, and these have surged in the face of opposition parties, especially the CPI(M), leading the protests against Biplab Kumar Deb’s “misrule” and BJP’s failure to fulfil its electoral promises. “We are under attack because we are mobilising people on livelihood issues. They (BJP workers and leaders) are trying to isolate us from the masses. But we will take up this political challenge and keep going to the people,” Sarkar said.

The four-time former chief minister said that such attacks had begun in 2018, immediately after the BJP came to power, when “90% of the opposition candidates” were physically prevented from filing their nominations in the local body polls. He added that the 2019 parliamentary elections witnessed wholesale rigging by the ruling BJP, forcing the election commission of India to intervene.

Not just the opposition, but also media houses, journalists and advocates who have taken up cases of state’s excesses have been attacked, Sarkar alleged.

“In the past one-and-a-half years when people were reeling from the pandemic, 35 media persons were physically attacked. Courageous advocates who were fighting cases highlighting state’s failures were also similarly attacked,” he said.

Addressing the press briefing with Sarkar, CPI(M)’s general secretary Sitaram Yechury called the attacks “reprehensible violence by the ruling BJP”. A short video clip was also played, which appeared to show regional BJP leaders instigating workers against CPI(M). The clip noted that 43 CPI(M) party offices across the state were vandalised or set fire to, while four media houses were attacked similarly by alleged BJP workers.

“I must make it clear that these are large-scale, deliberate and unprovoked attacks. The attacks show the real character of the BJP in Tripura,” Yechury said, adding that the attacks are the saffron party’s way to tackle the growing discontent among people against unfulfilled promises.

He said that the BJP is “violating every constitutional tenet”, chanting slogans of “Jai Shri Ram”, with the complicity of state police which have not only been silent spectators to such attacks on the opposition leaders but have also helped BJP workers perpetuate such crimes.

The BJP keeps raking up the issue of political violence in states where it is in opposition but incidents in Tripura show that when their leaders commit such acts, “they have a different set of rules”, Yechury said, adding that his letter to the Prime Minister Narendra Modi seeking a meeting to discuss the issue wasn’t even acknowledged.

The party released a statement that said:

“On September 7 and 8, 44 party offices [42 of the CPI(M), 1 Revolutionary Socialist Party, 1 Communist Party of India (Marxist-Leninist)] have been attacked, burnt, party property destroyed. In an unprecedented display of criminality, the State office of the CPI(M) Agartala was attacked, sought to be burnt, mobs entered the premises and vandalised the bust of veteran tribal leader and former Chief Minister Dasrath Deb. The CRPF guards deployed at the office were mysteriously withdrawn an hour before the mob attack.”

The party also said that 67 houses and shops of its workers were set fire to, while scores of its supporters were injured in such attacks on September 7 and 8.

Although saffron party leaders in the state have maintained that none of the attackers belonged to the BJP, the CPI(M) claimed that from March 2018 to June 2021, 662 party offices, 204 offices of Left mass organisations, 3,363 houses and 659 shops of its workers and supporters, and 1500 livelihood centres like fish ponds, rubber trees owned by party members were destroyed by BJP workers.