In TMC's National Brand-Building Spree, Varied Backgrounds of Its Inductees Have Unique Weight

Rarely has a regional party displayed national aspiration with such intense fervour as Mamata Banerjee’s party is showing now.

Banking on its Bengal assembly election success, the TMC now wants to contest the assembly polls in those states with its fullest strength, in all assembly constituencies, aiming to become the chief opposition there, if not the ruling force.

But what explains the party’s induction events in New Delhi, involving leaders from various parties with as diverse a geographical and political background as Kirti Azad and Pawan Verma?

Azad and Verma represented Bihar in the Lok Sabha and Rajya Sabha on tickets of the Bharatiya Janata Party and the Janata Dal (United), respectively.

None of these new entrants (Gokhale joined earlier) are political heavyweights. Nor are they known to enjoy any significant mass base.

“The inductions may be from scattered geographical locations but these joinings, even if they appear somewhat haphazard, are happening as part of a brand-building exercise,” said a senior TMC leader who requested not to be identified. He described the idea as the brainchild of political strategist Prashant Kishor, who has been working with the TMC as a consultant since June 2019.

But what can the party gain from Mamata Banerjee meeting with figures as contrasting as poet-lyricist Javed Akhtar and BJP Rajya Sabha member Subramanian Swamy? Won’t hobnobbing with people from the saffron camp dent her secular credentials? 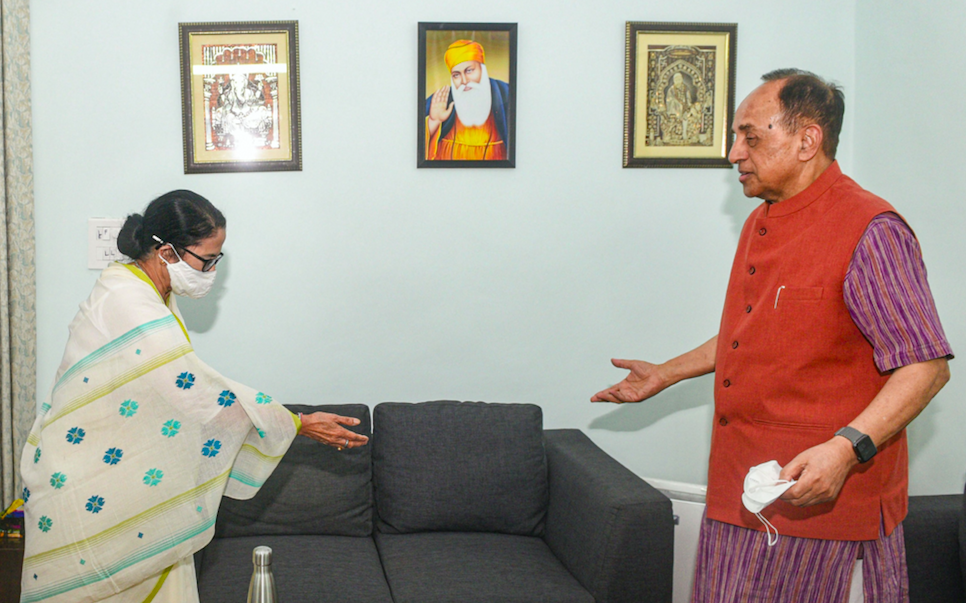 Speaking to The Wire, a TMC Lok Sabha MP ruled out the possibility of any such harm.

“The Congress and the NCP (Nationalist Congress Party) are in alliance with Shiv Sena, which everybody knows as a Hindutva force,” the MP said, adding, “Our plan is to have people with face value from as diverse sections as possible to express their agreement on the point that Mamata Banerjee is the best face to bet on for ending the Modi-Shah regime in 2024.”

“It is not the weight that these individual inductees carry that is of importance; the important point is the unity in thoughts – that Mamata Banerjee is the ablest leader to lead the battle against the BJP – despite their diverse backgrounds,” the MP summed up.

Political observers could not recall many examples from the past of a regional party making such aggressive bids for national expansion, except for, to some extent, the NCP and Mayawati’s Bahujan Samaj Party (BSP).

Both these parties, as a result of their efforts, managed to secure the status of a national party but neither have had remarkable influence beyond the states that are their strongholds – Maharashtra for the NCP and Uttar Pradesh for the BSP.

Also read: What Could TMC Gain by Taking in Babul Supriyo Who Failed To Deliver for BJP in Assembly Polls

As the TMC leader rightly pointed out, almost everyone who joined the TMC in recent times attributed their decision to Banerjee’s stature as the best person to lead the opposition against the Narendra Modi government, which has been ruling the country since 2014 with an overwhelming electoral mandate. 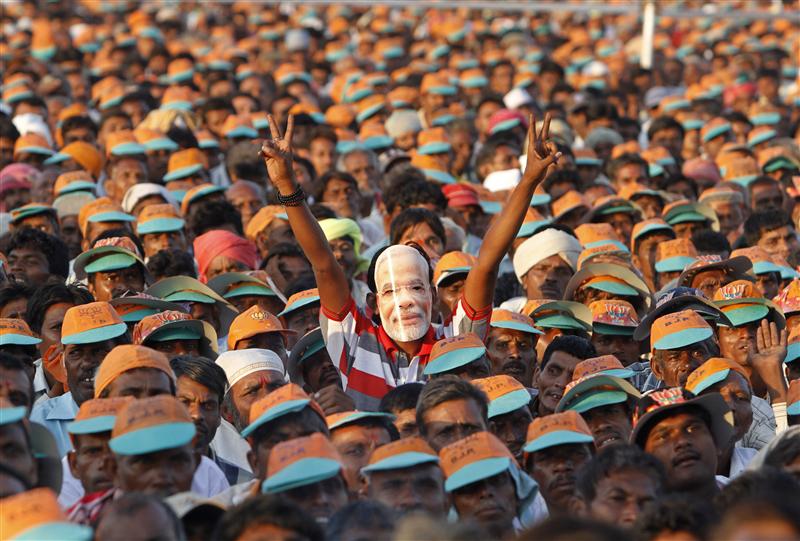 A BJP supporter in a Modi mask in the run up to the 2014 polls. Photo: Reuters/Amit Dave

“Of all the politicians I have met or worked with, Mamata Banerjee ranks with JP, Morarji Desai, Rajiv Gandhi, Chandrashekhar, and P.V. Narasimha Rao who meant what they said and said what they meant. In Indian politics that is a rare quality,” said BJP’s Subramanian Swamy.

“Congress has failed to play the role of the main opposition party in the country. Only Mamata Banerjee can give the right leadership,” he said.

“Today, a personality like her is needed in the country who can show it the right direction,” said Kirti Azad, three-time BJP MP-turned-Congress leader.

“Today, there is only one leader that can defeat BJP,” said Ashok Tanwar, former Haryana Congress unit chief who was known as having been close to Rahul Gandhi.

Gokhale described Banerjee as “ever fearless”, while others have cited her aggression, which they think is an essential component to take on the Modi-Shah-led BJP.

A senior TMC leader who has knowledge of the party’s ‘branding exercise’ in consultation with Kishor’s organisation said that the chief aim is to highlight the ‘strong leader’ and ‘street-fighter’ image that Banerjee has always had and encash on her ‘aggressive politics’.

“If we are to encash on her aggression, we need to play aggressively. This is why proactive moves, without waiting for others’ responses, is key to this game,” the leader explained.

An employee of Kishor’s organisation, the Indian Political Action Committee, or the I-PAC, who spoke to The Wire on condition of anonymity, said that Kishor had devised a similar branding exercise for the BJP’s then prime ministerial candidate Modi ahead of the 2014 Lok Sabha elections. 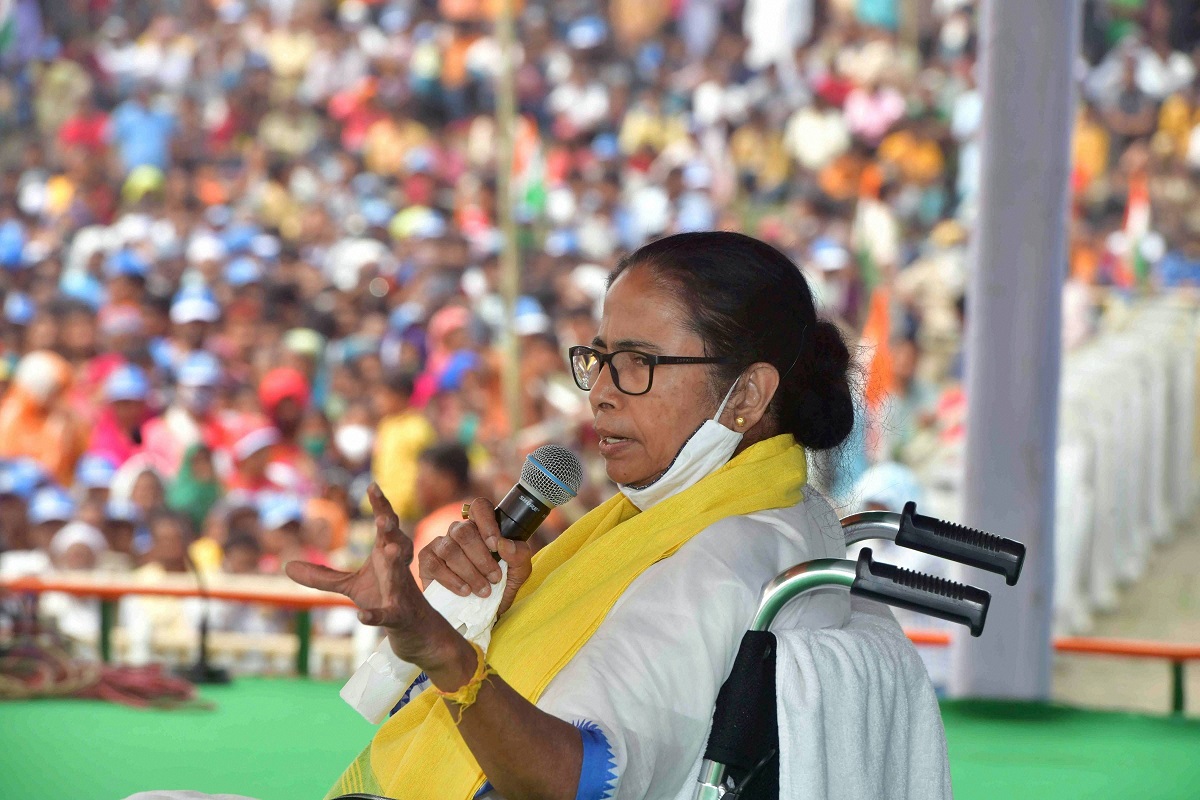 “Later, after Kishor quit working with them, BJP copied his style and gained success in its expansion drive. But Kishor is a master in this art of branding and the battle of perceptions. We are very confident these initiatives will pay off,” the employee said.

According to columnist Ajay Gudavarthy, an associate professor at the Centre for Political Studies at New Delhi’s Jawaharlal Nehru University (JNU), a peculiar political situation in India in which it is difficult to differentiate between parties on the basis of their policies has allowed the TMC to exploit Mamata Banerjee’s ‘personality cult’, just the way the BJP succeeded doing it around Modi.

“More or less, all parties are following a policy of massive neoliberalism with transactional welfarism and no one is speaking a language outside the Hindu majoritarian articulation. This confuses the voters. Whom to vote for? Politics have become more uncertain. It is in this context that personalities of the leaders have become important and make all the difference. The TMC is trying to cash in on Banerjee’s reputation of being a strong-willed woman,” Gudavarthy said.

Gudavarthy thinks that only proposals of radical reforms with a welfare-centric approach can end the political stalemate where policies matter less than propaganda around personalities.

“Congress’s ‘Nyay’ was a good idea but it came late. In Delhi, Kejriwal’s victory despite a vicious communal campaign shows that welfare-centric approach and administrative delivery pays off. To my understanding, the opposition will have a better chance if they sit together and chalk out a really radical policy focused on welfare and effective delivery,” he said.

The TMC’s landmark victory in the 2021 assembly election, despite the BJP’s full-blooded effort to dethrone her, has also been widely attributed to the welfare schemes of her government.

Also read: Interview | ‘Our Welfare Schemes Will Ride Us Back to Power’: TMC’s Derek O’Brien

The TMC’s principal message was made loud and clear by the party chairperson herself on Wednesday evening. While answering a question from the media on not meeting Congress working president Sonia Gandhi during her three-day stay in the national capital, Banerjee said, “Why should we meet Sonia Gandhi every time?”

Her four-day schedule in the national capital also did not include any meetings with another key opposition face, Delhi chief minister and Aam Aadmi Party (AAP) supremo Arvind Kejriwal, with whom Banerjee otherwise has cordial relations. Nevertheless, AAP is another party that has embarked into a national expansion plan, targeting the states of Punjab, Uttarakhand, Gujarat, Uttar Pradesh, Haryana and Goa, among others.

But word is doing the rounds in TMC circles that Banerjee is expected to meet Maharashtra chief minister and Shiv Sena leader Uddhav Thackeray and NCP chief Sharad Pawar around November 30-December 1 during her visit to Maharashtra. Her official programme is to meet industrialists for the state’s business summit, to which she has already invited Modi.

“Sharad Pawar had displayed national aspirations soon after launching the NCP in 1999 but Mamata Banerjee is going about it very systematically, as she has her eyes on Delhi. People from the Congress who are disillusioned with the way the party is functioning but cannot go to the BJP due to ideological reasons are seeing a home in the TMC. Being an offshoot of the Congress, the TMC is more akin to the Congress,” said columnist and political columnist Neerja Chowdhury.

She said that some kind of an opposition alliance is likely to form ahead of the 2024 Lok Sabha elections. Before such a coalition formalises, every party is looking to strengthen its own position by contesting the assembly elections due in various states.

“If the Congress is not getting its act together, it is actually moving very slowly, there is no reason why former Congress members should not reclaim the Congress,”  said Chowdhury, adding that the possibility of different offshoots of the Congress, such as the NCP and the YSR Congress in Andhra Pradesh coming together in an alliance could not be ruled out.

If a senior TMC leader is to be believed, the party also aims to have political veterans such as Lal Krishna Advani of BJP and Kapil Sibal of Congress to say some words of praise for Banerjee even if they do not agree to leave their parties.

“We are targeting disenchanted leaders from both Congress and BJP. Those coming from the BJP should ideally say Modi must go and those from the Congress should say Congress can’t do it. The success rate has so far been high in the case of Congress because the party is caught in internal trouble. But we are hopeful of breaching the BJP’s defence as well,” a veteran TMC Lok Sabha MP said.

In West Bengal, the TMC has already poached a BJP Lok Sabha MP and seven MLAs, apart from leaders of various ranks, and are also trying to engineer a defection drive in the BJP’s Tripura unit.

As of now, the TMC is enjoying the successes it has achieved.  “Trinamool. Here’s looking at you,” the party’s Rajya Sabha leader Derek O’Brien tweeted on Wednesday night, adding an ‘angel face’ emoji to the text. The tweet came soon after the news of Sangma’s defection to the TMC along with 11 other MLAs broke.

Here’s looking at you😇 #politics

The next morning, the editorial in the TMC’s mouthpiece, the Bengali daily Jago Bangla, was headlined ‘Aksham Congress’, or ‘the incapable Congress’.