The numbers prove that India is far from being a bipolar polity. But why are regional parties vilified even though coalition governments have been found to be far more inclusive than single party majority governments?

After facing defeat in the 2009 general elections, the Bharatiya Janata Party’s L.K. Advani sought solace by crediting his party with creating a bipolar polity in the country and ending the hopes small parties had of forming the government. He described regional parties as a den of vote bank politics who could even unite with “dacoits and robbers if it can help gain more votes”.

The BJP’s utter disdain towards regional parties is showing again, especially after a buoyant opposition, including the Congress, put on a display of unprecedented unity – visual if not actual – during H.D. Kumaraswamy’s swearing-in ceremony in Bangalore.

The media too has joined the BJP in describing the opposition’s unity as ‘unholy’ and likely to lead to ‘anarchy’ – echoing what Arun Jaitely said a week after the BJP lost Karnataka to a post-poll alliance.

But why are BJP leaders and their media sympathisers castigating India’s smaller parties? Is India a bipolar polity even today? The combined vote share of the Congress and BJP has never crossed the 51% threshold in recent past. The 2014 elections – described as a wave election – merely saw the BJP and Congress swapping vote shares when compared to the 2009 elections, while the remaining 50% was grabbed by smaller national parties and regional parties.

The 2014 general election results where the BJP and Congress together got 50.86% of the vote. Credit: eci.gov.in

Given their continued relevance in India’s politics, why are “smaller parties” and the coalitions they aspire to always assailed and criticised? This is because there are three myths about coalition governments that the propaganda machinery of the bigger parties likes to spread.

Myth No. 1: Coalition governments are unstable and bring anarchy

Equating regional parties with crime and corruption, Jaitley recently described the example of the Janata Dal-led United Front government between 1996 to 1998 as the worst period for India, calling it anarchy. But was this period really anarchic?

World Bank data indicates that India’s GDP and annual GDP growth didn’t suffer due to a minority coalition government at the Centre. India didn’t collapse as a country, no foreign country attacked it and communal riots did not break out. The anarchy of today’s lynch mobs did not exist. This was the time that India’s IT industry took off, laying the ground for the ‘Y2K’ era that resulted in an unprecedented boom for the sector.

The Congress’s decision to support the coalition from outside in order to prevent the BJP from coming to power did put a question mark on the longevity of the arrangement. Surely, there was friction as all parties tried to address their constituencies. But compare that to authoritarian rule by a single party majority government and you can clearly see the difference. Prime Minister Narendra Modi – clearly unanswerable to the cabinet, his party, the NDA allies or the media – unanimously took a major policy decision like demonetisation that adversely impacted millions of Indians.

After the chaos and undeclared anarchy that common people had to contend with in order to get cash for their basic needs, with many dying in the process, how can Jaitley speak of the anarchy of coalition rule? Modi did not even apologise for causing this disaster despite demonetisation failing to achieve a single objective he had originally laid out.

Clearly, anarchy does not depend on whether this is a coalition government or a single party-run one; it depends on the decisions made by the cabinet.

Myth No. 2: Cabinet portfolios are assigned to unqualified people

India’s first single party majority government in decades has given us Smriti Irani as human resource development and then information and broadcasting minister. It also brought us Manohar Parrikar as defence. Neither lasted very long in those crucial portfolios. Finance minister Arun Jaitley and home minister Rajnath Singh, whatever their qualifications, have struggled to bring jobs or harmony in the country. So poor is the BJP’s bench strength that with Jaitley now out of action for a lengthy period, the prime minister had no option but to assign his portfolio to Piyush Goyal.

Four years on, the talent deficit in the Modi government is clear. Ministers like Babul Supriyo and Mahesh Sharma – who is handling culture – have made a mockery of their portfolios by issuing idiotic, offensive and divisive statements.

Modi’s ways of allocating portfolios was criticized even by his supporters. Surely, the alliance government of 1996 had its own limitations but it had a much better and experienced team handling portfolios. Don’t forget, the H.D. Deve Gowda-run United Front government had stalwarts like I.K. Gujaral, Indrajit Gupta, P. Chidambaram, Chaturanan Mishra and Mulayam Singh Yadav as ministers – each representing separate regional parties.

Myth No.3: The lack of a prime ministerial contender means everybody is pulling everybody else down

“Who will be the face of the opposition for 2019?” “Modi versus Who?” Just as we like to pitch two captains against each other ahead of an important cricket match, sections of the media are asking who the opposition will field as its ‘captain’ against Modi.  So here is a basic civics lesson: India is a parliamentary democracy, not a presidential one. Since Independence, only six prime ministers were projected ahead of polls – Jawaharlal Nehru, Indira Gandhi, Rajiv Gandhi, V.P. Singh, Atal Bihari Vajpayee and Narendra Modi.

The longest serving prime minister of a coalition government, Manmohan Singh, was never even the defining face of his UPA coalition. But the largely pro-Modi media is asking who the face of the opposition will be. They forget to mention that the BJP has more than 40 alliance partners in the country. In Maharashtra alone, it still has four alliance partners – the Shiv Sena, the Shetkari Sanghatana, Republican Party of India (A) and Rashtriya Samaj Paksha. In Bihar, it has three partners. In other words, even Modi isn’t a lone warrior and depends on regional satraps. 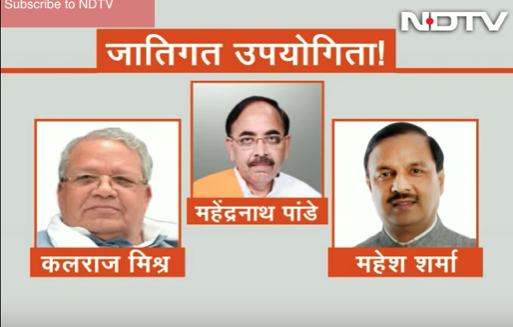 Now compare this with a coalition government. It is noteworthy to mention that the SC/ST (Prevention of Atrocities) Act was passed under the minority coalition government of V.P. Singh. Not only this, the relegated figure of Dr. B.R. Ambedkar was brought back to focus under his rule. Imagine, the portrait of the architect of India’s constitution was not even part of parliament’s central hall until then. The famous Mandal Commission report, which provided reservation to a vast majority of Other Backward Classes (OBC) in jobs, was implemented during V.P. Singh’s coalition government. The 27% reservation for OBCs in Centrally-run institutions of higher education was implemented by the UPA coalition in 2006.

India currently has a single party majority and the BJP rules in 20 states, but the arrogance of the majority is palpable as Modi chooses to keep quiet on Dalit, Muslim, women and farmers issues.

A clear majority doesn’t automatically guarantee good governance. Despite not being in a true coalition government, Modi still has enough problems like Shiv Sena and dissenters within his own party like Savitribai Phule, Shatrughan Sinha and Kirti Azad, who leave no opportunity to criticise his policies. And don’t forget the Rashtriya Swayamsevak Sangh as big boss micromanaging the whole show.

Yes, the 1996-1998 era brought mid-term elections because the Congress was supporting the government from outside, unlike in Karnataka. And yet there was no anarchy. If anything, ‘weak’ governments tend to be more people friendly as there is danger of mid-term elections all the time. The late Kanshi Ram had joked once that he preferred a majboor (dependent) sarkar to a mazboot (majority) one as it is more likely to cater to the weakest sections of society.

Ravikiran Shinde is an independent writer on social and political issues