The BJP’s leadership has effectively separated its political and electoral agenda. 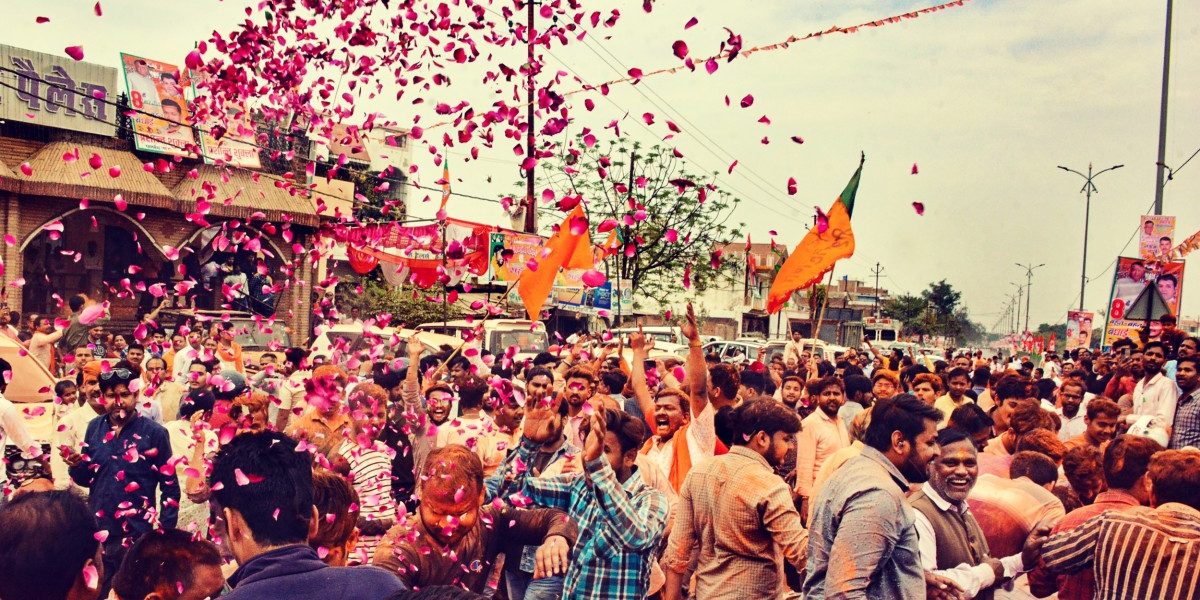 BJP supporters celebrate with flowers, as the party heads to a landslide victory in the UP Assembly elections at Gallamandi Naubasta, in Kanpur, Thursday, March 10, 2022. Photo: PTI

New Delhi: Emerging electoral trends in five states signal that the decisive rightward shift of India’s polity has been further cemented. Barring a few intermittent losses, the Bharatiya Janata Party’s (BJP’s) winning streak doesn’t appear to be reversing. The Hindu nationalist party has, in fact, made great strides in provinces where it had negligible presence before 2014.

In contrast, the Congress has shown no signs of a revival. It lacks ideological clarity and appears to be driven by directionless leaders more interested in grabbing media attention than winning over voters. As a result, it has lost a number of its influential leaders, even as it has shown no new efforts to muster up respectable organisational muscle.

The regional parties have shown spurts of energy and intent to hold on to their territories against an expanding BJP, but their efforts often get undone by the money and muscle power the BJP has accumulated over the last seven years. The spirited challenge that the Samajwadi Party mounted against the BJP in Uttar Pradesh is a case in point. Although it managed to almost double its vote share, it still fell short of the over 40% votes that the BJP has consistently been polling.

Against this backdrop, only the Arvind Kejriwal-led Aam Aadmi Party has successfully prevented itself from getting drawn into the polarised polity that BJP has successfully churned out since 2014. Although a regional force, AAP remained uncomfortable in tagging itself as such. It projected itself as a national alternative to the BJP within the spectrum of the political right, and built its organisation consistently and by silently working towards building ground in states like Punjab, Goa and Uttarakhand.

It is not surprising that within 10 years of its formation, AAP pulled off a spectacular victory in Punjab by an absolute majority. It had shown signs of emerging as a force in 2017, and progressively worked on the ground to consolidate its gains. In Goa too, after seeing no success in the last election, AAP stayed the course and has opened its account by winning two seats this time.

First, with wins in four states – Uttar Pradesh, Manipur, Uttarakhand and Goa – the BJP has put itself firmly in a comfortable position for the 2024 parliamentary elections. Its performance in UP will be special as it becomes the first party in the state in over three decades to come back to power for two consecutive terms. It was able to beat the strong anti-incumbency sentiment against the Adityanath government by focusing on consolidating its core voter support, and gained marginally in terms of vote share to build on its already colossal vote share of around 40%.

Most analysts compared the 2022 assembly polls in UP with its performance of 2017. They expected that the SP’s strong challenge and attempt to create an umbrella coalition of OBC groups and a section of middle classes will dent BJP’s vote share. However, the BJP managed to increase its vote share by almost four percentage points. Given the fact that the BJP studies its electoral performance closely, it will likely compare the 2022 assembly polls with that of its performance in 2019 parliamentary polls, when the saffron party had polled around 50% of the total votes.

The SP managed to almost double its vote share, making this its highest ever, but still remained much behind the BJP in those terms. SP has gained votes across the state in both rural and urban areas. The increase has come largely at the cost of the Congress and Bahujan Samaj Party, both of which polled their lowest-ever votes. The SP also weaned away a good number of urban voters (18% gain in votes for the SP in urban areas) and a section of OBCs which had splintered away from the BJP. However, the saffron party held on to a majority of its core voters and also gained from the losses of the BSP and Congress.

The bipolar contest benefitted SP the most, but also improved BJP’s chances.

Second, AAP’s win in Punjab and SP’s noteworthy performance may become a template for the opposition in future. AAP projected itself as an anti-establishment force and kept its campaign focused on developmental issues. It breached fault lines based on caste, community and religious allegiances successfully and captured the minds of voters, who across the country have been showing signs of a fatigue against the entrenched political system which derives its strength from exploiting the fault lines of Indian society. 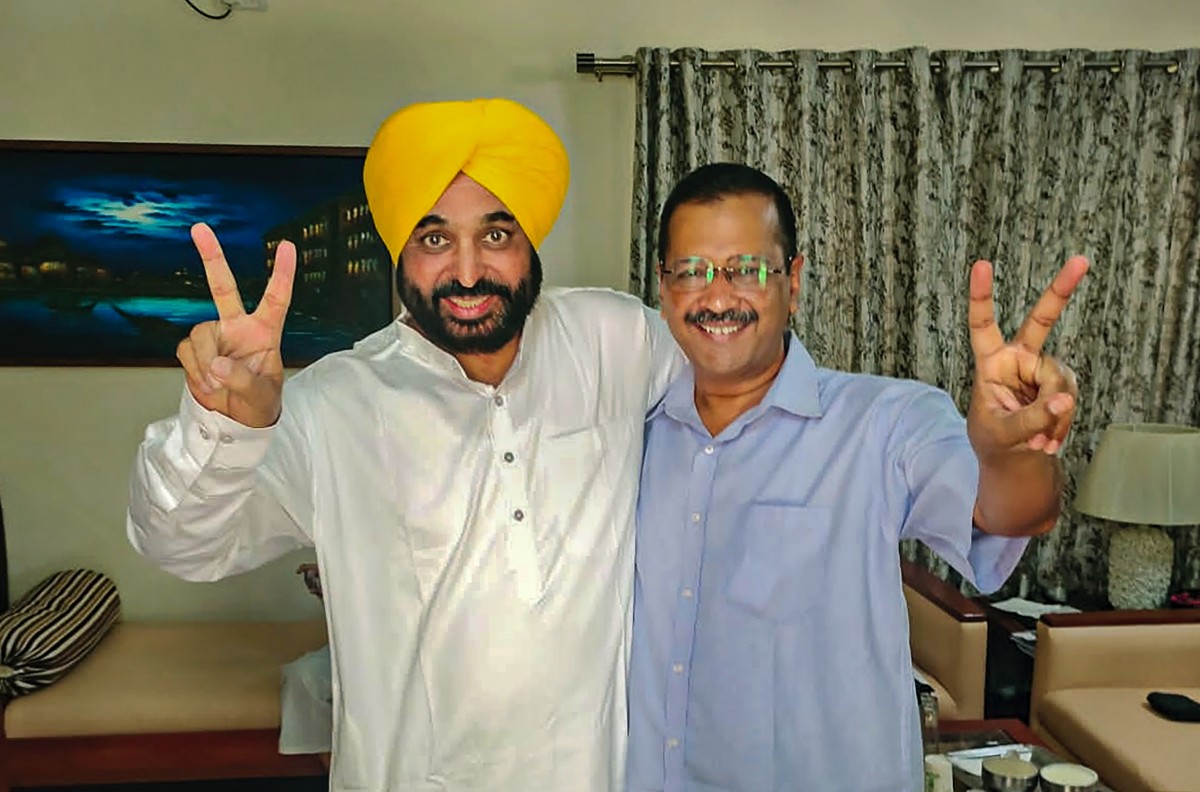 Narendra Modi, to a certain extent, campaigned on similar lines but undid himself with a parallel anti-minority predisposition, making his slogan ‘Sabka Saath Sabka Vikaas’ appear vacuous. Arvind Kejriwal, on the other hand, refuses to be trapped into any of these ideological binaries, although some may question his silence on controversial but important matters. Yet, he is still perceived as a leader who has kept his promise of “honest governance”.

Akhilesh Yadav, too, realised that if he had to defeat BJP, he had to fragment the saffron party’s core and win over its supporters. Through the elections, he worked towards that goal. He did that by appealing to a larger constituency which was unhappy with the Adityanath government. In the process, he attempted to create a broad-based social coalition which was not strictly derived from caste-based fault lines – a strategy that his party has often relied upon.

However, given the baggage of being a Mandal party that his party carries on its shoulder, it may take a longer time for Akhilesh to emerge as a leader of all classes and caste groups. His political strategy, however, to rebrand his party as an inclusive, development-oriented one, had a popular appeal, despite the fact that a big section of voters may not have eventually voted for the SP.

Third, the trends show that social justice politics of the Mandal era, which pitched OBCs and Dalits against ‘upper caste’ groups in the electoral field, may have finally run its course, at least in the Hindi heartland. The politics of social justice needs reimagination. Although the question of dignity for marginalised caste groups remains hugely politically relevant, a large majority of voters across caste and communities expect their elected representative to address development concerns without amplifying the ground-level caste and community conflicts. The BJP has addressed such aspirations among voters, while others have largely failed in that respect. The exclusion of Muslims in BJP’s development paradigm hasn’t affected its electoral prospects until now – but it has definitely helped it consolidate much of the caste-driven Hindu sections of the electorate.

The saffron party’s leadership has effectively separated its political and electoral agenda. The last few elections have shown that although it has kept its Hindutva agenda alive in its political practice consistently, it has largely been minimising its use in its campaign, choosing to foreground welfare and developmental concerns during elections.

The opposition parties haven’t successfully devised a definitive electoral strategy in that respect. The SP and AAP have started a new trend. It remains to be seen whether other opposition parties can emulate it and find a new and more relatable political language.