The governor has revealed Modi to be a ruthless ruler, unbothered by the human costs of his megalomaniacal projects. 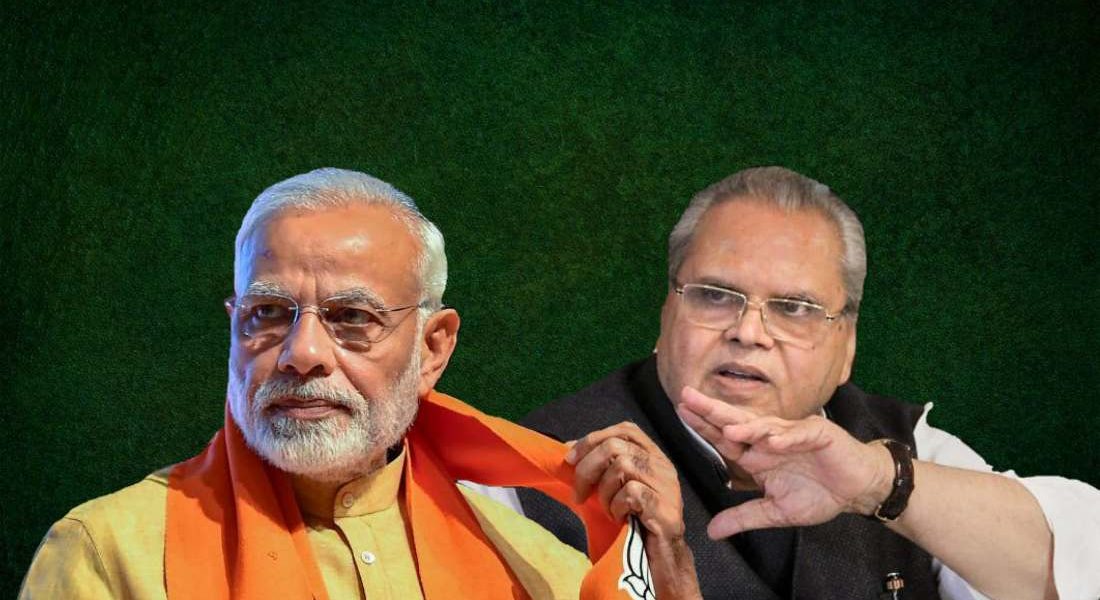 Some six decades ago, a somewhat inebriated Russian was detained in downtown Moscow for shouting, “Khrushchev is a fool; Khrushchev is a fool.” He was promptly arrested and expeditiously sentenced to 22 years’ imprisonment. When a Politburo member asked the Comrade Magistrate for the logic of 22 years, the Soviet judge explained, “Two years for insulting the secretary-general of the Communist Party of the Soviet Union, and 20 years for revealing a state secret.”

Governor Satya Pal Malik has put our ruling coterie in a somewhat similar quandary. He has at a public function, as the per a video recording of the event, characterised Prime Minister Narendra Modi as an “arrogant” ruler. He went a step further; he also quoted the all-powerful Union home minister, Amit Shah to create the image of a prime minister losing, possibly, his marbles.

If Malik had not been holding a constitutional position, he would most certainly have been dealt with in the same stern manner – and for the same reason – as the Soviet authorities did with that drunkard.

Still, the reigning cabal’s predicament is genuine. When Malik talked of the prime minister’s arrogance, he was not spilling any beans. It is hardly a secret. In fact, it is the prime minister’s image-managers who have carefully built an aura of imperiousness about him. He has been marketed as a self-made man who is not confused about his values and priorities in life; a leader who does not seek to occupy the middle, in the manner of an Atal Bihari Vajpayee; a demanding ship captain who brooks no departure from the command and control blue-book; a man who is haughtily indifferent to the political niceties of Old India.

Yet, it is one thing for the prime minister’s domestic political rivals or foreign critics to call him arrogant, it is an altogether different proposition if an incumbent governor is to be allowed to get away with calling him names. To add insult to injury, Malik has not shown any signs of remorse over the public disclosure of a privileged conversation. Unfazed by all the noise and controversy his revelations have caused, the veteran politico has stood by the substance of his initial public remarks even when he resorted to the tired “quoted out of context” ruse.

Constitutionally, the prime minister can exercise his prerogative to advise the president to withdraw his “pleasure” from the Meghalaya governor. If only it were that easy. Malik should have been shown the door when from his gubernatorial perch he doubted, months ago, the wisdom of those three infamous farm laws. Malik fancies himself as a leader of the farming community of western Uttar Pradesh. He spoke out on behalf of the farmers at a time when the prime minister and his “reformist” advisers were still determined to shove those ill-advised laws down farmers’ throats. Malik questioned the ruling establishment’s dogmatic certainties.

He remained untouched and unrebuked. By pretending not to notice that Malik was breaking ranks, the otherwise overbearing autocrats appeared to be conceding that the governor was made of a different mettle.

But Malik is not just another time-server. He belongs to an older – and superior – political generation, to a time when politics was not so firmly in the corporates’ stranglehold. He got his political baptism during V.P. Singh’s heyday. Along with Governor Arif Mohammed Khan (who so far remains un-disillusioned with the Modi cabal), this jan morcha veteran has brought to the BJP crowd a priceless asset: political respectability. Today, Modi looms large but a sense of history enjoins us to remember that there was a time when Modi was not over the respectability hump, and it was the Arif Khans and Satya Pal Maliks of the world who helped erode the Gujarat strongman’s political untouchability. Malik’s presence in the Srinagar Raj Bhavan was particularly helpful when the much-touted “Chanakyas” were chipping away at Article 370. As the original Congressman, Malik provided a political cover; but once his usefulness in Kashmir was over, he had to make way for an old saffron war-horse.

People like Malik have opted to get into the bed with the BJP for a number of personal and political reasons, but they remain outsiders and are treated as outsiders. And since he is not from the RSS stable, he is beyond the Nagpur commissars’ blandishments. Hence his untamed proclivity to speak out of turn. For now, the BJP top managers, otherwise feared as unsentimental enforcers, are reported to have opted to swallow the Malik insult. (Perhaps that also explains why the bulk of the media has ignored the governor’s observations.) A weakness that would not go unobserved by other institutional players and constitutional functionaries in the power game.

Malik’s real sin is far more significant than his ‘arrogant’ characterisation. The real import of the Meghalaya governor’s remarks at Dadri lay in his portrayal of the prime minister as callously self-absorbed.

Admitted, we have in recent years become a much more violent, irrational and cruel society, yet no one in Indian public life – least of all a prime minister – can afford to be seen as indifferent to the deaths of more than 500 farmers. Modi has assiduously manufactured an image for himself of a pradhan sevak dedicated selflessly and entirely to public well-being; Malik has revealed him to be a ruthless ruler, unbothered by the human costs of his megalomaniacal projects. A dangerously debilitating reputation for any leader in a democracy.