L.K. Advani, the Provocateur in Chief

The violence that accompanied the senior BJP leader's rath yatra and the incendiary speech he gave in December 1992 before the mosque was demolished are well documented. 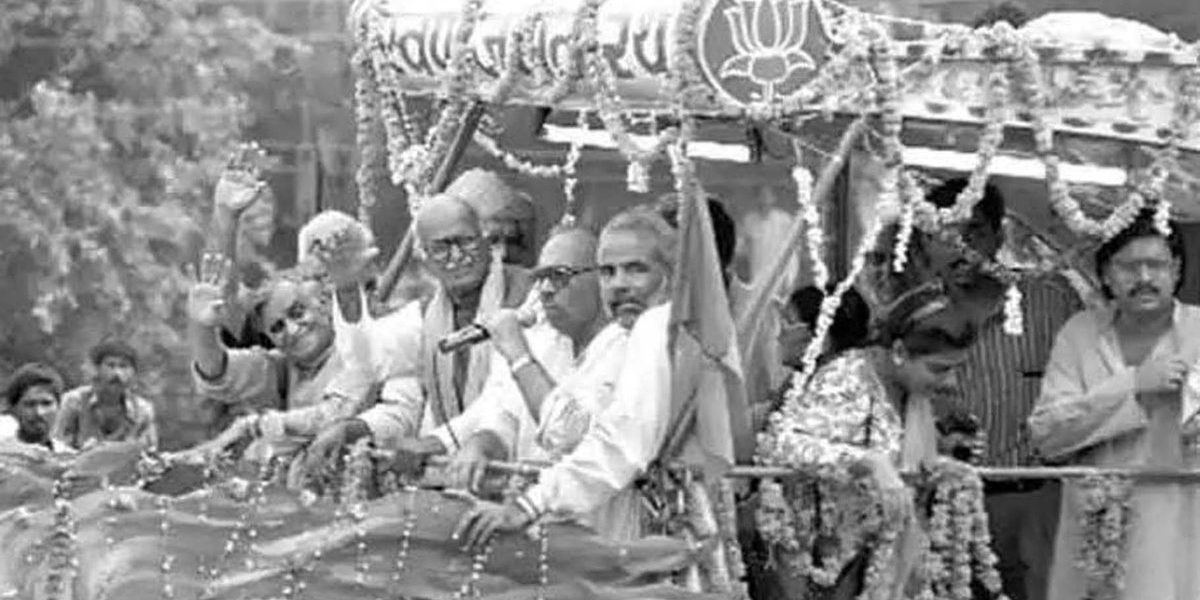 Note: This article was first published on November 9, 2019 and is being republished on September 30, 2020 in light of the verdict acquitting all those accused in the Babri Masjid demolition case.

New Delhi: No one else bears more singular responsibility for the demolition of the Babri Masjid and the violence that preceded and followed it – in which the lives of thousands of Indians were lost – than Karachi-born former deputy prime minister Lal Krishna Advani.

After getting a free case from the Central Bureau of Investigation in the demolition case when Atal Bihari Vajpayee was prime minister, Advani was finally chargesheeted in 2017 on the directions of a Supreme Court bench led by Justice Rohinton Nariman. On cue after the November 2019 apex court judgment which handed the disputed land to the Hindu plaintiffs for the construction a Ram temple, he promptly declared himself vindicated.

The Bharatiya Janata Party was founded in 1980 and Advani assumed leadership of the Ram Janmabhoomi movement in 1984 before becoming party president in 1986.

In 1989, the BJP announced that the construction of a Ram temple on the land where they believed Lord Ram was born – and where the Babri Masjid had stood for over 400 years – was its key political agenda.

In the autumn of 1990, Advani launched a rath yatra from Somnath to Ayodhya, the purpose of which was to stir up support for the demand for the construction of a Ram temple at the spot where the mosque stood.

A Shiv temple had stood in Somnath since at least the 6th  century CE. It was demolished and reconstructed several times over the centuries. The last demolition came at the hands of the Mughal emperor Aurangzeb in 1665. It lay in ruins until 1950 when its reconstruction began under the prime ministership of Jawaharlal Nehru.

Advani’s choice of beginning the yatra at Somnath and ending in Ayodhya thus had a very powerful symbolic value of ‘reclaiming’ the temple in Ayodhya as was done in Somnath.

“The choice of Somnath as the starting point of the yatra had a powerful symbolic value, made evident by repeated references to it as the target of Muslim tyranny against the Hindus…The intention was to contextualise Ayodhya in the historical lineage of Muslim aggression and then to seek legitimacy for Mandir movement by drawing a parallel. The parallel the Sangh Parivar drew was with the reconstruction of the Somnath temple.”

Advani’s rath yatra made it abundantly clear that he was not carrying a message of peace. Pictures of him carrying a trishul, an axe, a sword and a bow and arrow also emerged. Workers of the Bajrang Dal and the Vishwa Hindu Parishad pasted posters along the route of the yatra of the proposed temple and the ‘treachery’ of Muslims.

Through the course of the yatra there was large scale violence, rioting and killings. Advani and his associates were finally stopped and arrested by the Lalu Prasad Yadav-led Bihar government in Samastipur in October 1990. Even after the arrest of Advani, thousands of kar sevaks managed to reach Ayodhya where 20 of them were killed after a clash with the police.

Two years later, on December 6, 1992 the Babri Masjid was demolished by a mob of kar sevaks led by a coterie of BJP leaders, who in turn were led by Advani.

Also read: Why Don’t We Hold Our Leaders to a Higher Standard of Morality?

His role, according to several reports, was key. Anju Gupta, a police officer who was with Advani on December 6, testified before a CBI special court that Advani made a provocative speech before the mosque was brought down by the kar sevaks who had gathered.

“On December 6, 1992 Advani made a spirited speech from the Ram Katha Kunj Manch, barely 150-200 metres from the disputed site, which charged the people. He repeatedly said that the temple would be constructed at the same site,” Gupta told the court.

She also said that when the kar sevaks began demolishing the Babri Masjid none of the BJP leaders who were present, including Advani, made any efforts to stop them. Once the mosque was demolished, the BJP leaders distributed sweets, according to Gupta’s testimony.

In 2017 speaking to The Wire, some of the kar sevaks who were part of the mob that demolished the mosque said that BJP leaders including Advani, Murli Manohar Joshi and Uma Bharti, told them to demolish it.

The CBI chargesheet had noted that Advani had said that the December 6 kar seva “would not mean only bhajan and kirtan, but would also involve construction of the Shri Ram temple.”

It also added that the demolition was not a spontaneous act and that the final decision to demolish the Babri mosque was taken at a secret meeting at the residence of BJP leader Vinay Katiyar which was attended by Advani.

Advani and several others, including Murli Manohar Joshi, were charged with criminal conspiracy. In 2001, the Allahabad high court dropped the charge of criminal conspiracy. But the charge was restored by the Supreme Court in 2017, which described the act of demolishing the mosque as a crime that had shaken the ‘secular fabric of the Constitution’.

The apex court in its judgment directed the sessions court at Lucknow to complete the trial within two years. A final verdict is yet to be delivered despite the two years having passed in April this year.

In July 2019, the Supreme Court extended the deadline by another nine months.

Advani now lives a life of relative obscurity having been relegated to the ‘margdarshak mandal’ after his former protege Narendra Modi took charge as prime minister. In 2019, Advani was overlooked in favour of Amit Shah for the Lok Sabha ticket from the Gandhinagar constituency which Advani had made his own since 1998.

Though he is no longer an MP and thus not entitled to government housing, the Modi government has continued to allow him to occupy a Lutyens bungalow on “security considerations”.