The End of Burhan Wani: 'Capture' Rather Than 'Kill' is Better for National Security 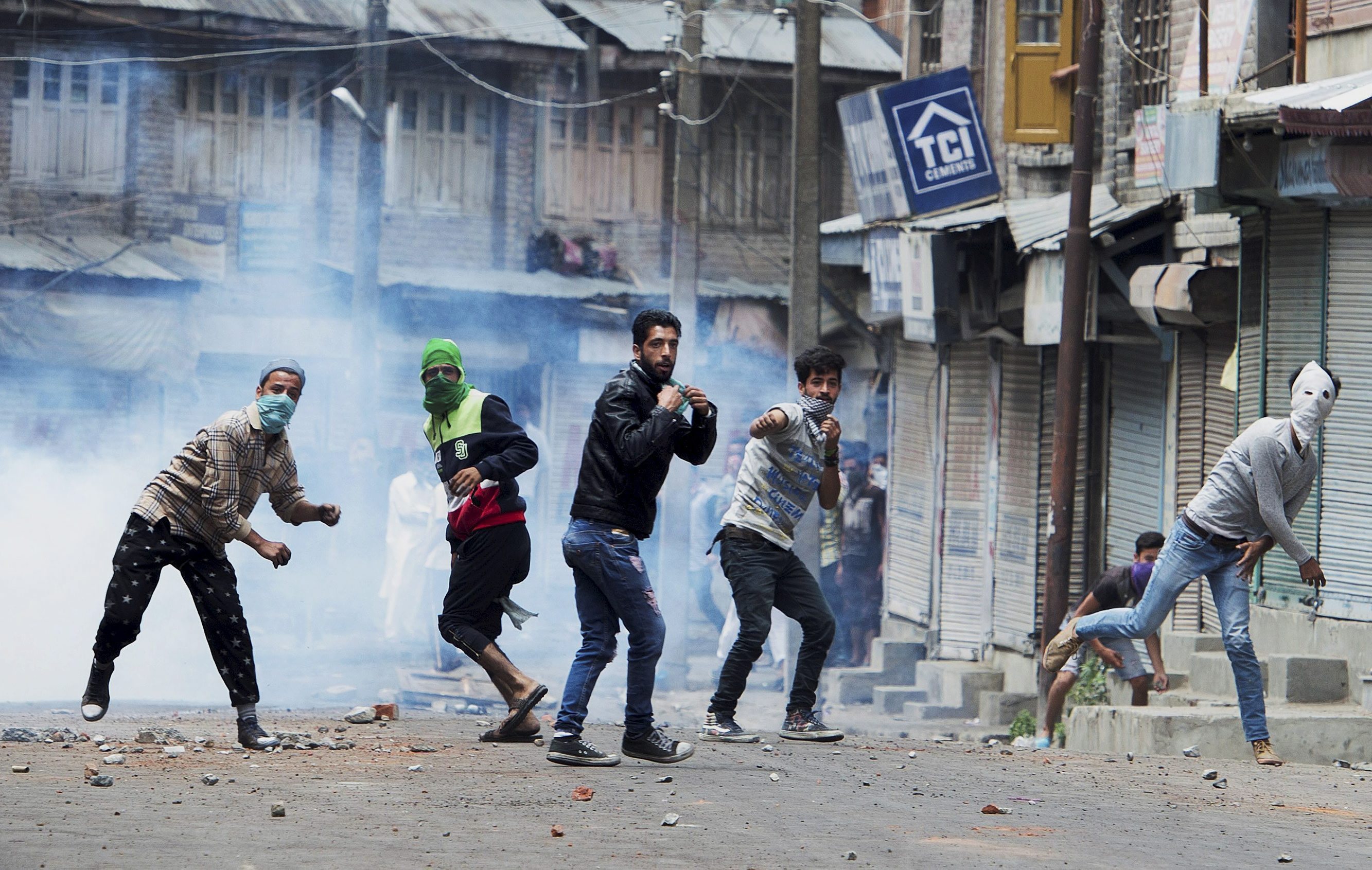 Srinagar: Protesters throw stones on police amid tear smoke during a clash in Srinagar on Sunday. Authorities imposed restrictions in most parts of Valley following the killing of most wanted Hizbul Mujahideen commander, Burhan Muzaffar Wani, along with his two associates. PTI Photo by S Irfan (PTI7_10_2016_000101B)

Srinagar: Now that the killing of Burhan Wani – described by the national media as “the poster boy” of Kashmir’s new wave of militancy – has unleashed a massive wave of protests across the Valley and led to the death of at least 18 people, we must question whether there was a better way to have dealt with him. In fact, some observers suspect that he was caught and then killed. If they are right, that tactic was a terrible blow to the national good; the events that are now playing out will prove extremely costly.

Tragically, the security establishment appears to have less than full regard for the legal-judicial system to deal with militant rebels. This is not good for the current situation, or for the future of India.

To be sure, the ways in which the legal-judicial system has functioned, particularly in the context of insurgency and terror, has raised questions in many minds. In this context, the strong position Chief Justice T.S. Thakur has taken for impartial and politically neutral functioning deserves high praise.

One thing is clear: the timing of this landmark killing was almost too good to be true. Ramzan, when large numbers gather in mosques five times a day and every night, was over,  Eid-ul-Fitr too was over, but a festive atmosphere lingered. Schools, colleges, universities and offices were to remain closed, in most cases until Tuesday or beyond.

Burhan’s death was announced on a Friday evening. So, there was another week to go for the next Friday’s prayers, when large numbers gather. In some areas, young people have taken to regularly protesting with stones after Friday afternoon prayers.

Official tacticians might have further calculated that it was easy enough to shut off the Internet over the weekend; social media has become the most important vehicle for mobilising protests and spreading images and narratives of excesses by the security forces. Whatever the security establishment figured, their calculations were obviously faulty. Violent protests erupted across the valley and show, at the time this report was filed, no signs of abating quickly.

For at least the past year, strategists in the military and political establishment have had to consider the advantages and disadvantages of eliminating Burhan – given the fact that they generally don’t seriously consider the option of capturing such high-profile targets alive.

They could not ignore the fact that glowing stories of Burhan’s fight against the state had motivated large numbers of youths, including many teenagers, to take up arms. His continuation in the field was a symbol of failure for the state. On the other hand, the evidence of the last autumn indicated that his funeral would be a highly emotional mass event, which could inspire more young people to join the militant ranks.

The overwhelming question they had to face was this: Would Burhan become an even bigger icon in death than he had been in life? The obvious answer was: Surely.

Certainly, Maqbool Butt and Afzal Guru became huge symbols of Kashmiri aspirations after they were hanged; relatively few Kashmiris had been conscious of – or been motivated by – Butt or Guru when either still lived. This conundrum is partly explained by the nature of Burhan. He was a pleasant-faced, relatively soft-spoken, handsome young man in his early 20’s. Some hold that no militant in Kashmir has ever been as popular. Perhaps only Ishfaq Majid, the JKLF chief commander in 1989-90,and Shabbir Shah in the years before that had this level of iconic popularity.

To be sure, Burhan was relatively unknown until he shot like a meteor to iconic fame after his elder brother Khalid was brutally killed by the security forces in April 13, 2015. The grotesque evidence of torture and mutilation on his body that his family cited immensely boosted public sympathy for Burhan. For, Khalid was not a militant: He was caught while returning from a meeting with his younger brother in a forest. Burhan had taken to militancy in 2010, when he was still in his mid-teens.

At root, we are paying the price for the horrendous and utterly indefensible way in which the security forces killed Khalid. It is tragic that some of the men who actually combat militancy on behalf of the Indian state often have little sense of the negative impact on national security that  their cruelty has. Too often, they surge with nasty doses of macho violence.

In that light, it was a good thing that the counter-insurgency machinery held back from going all-out to capture Burhan last autumn or winter. At that stage, Burhan’s death would probably have boosted militancy and public unrest even more than it will now.

Anecdotal evidence suggests that several sections of young Kashmiris have introspected over the past few months. There is more talk of the futility of militancy now than there was a few months ago.

This may not necessarily be the mainstream view, but there is some change. Perhaps not enough to stave off a spurt in militancy, but at least one can say that it would have been worse some months earlier.

Another factor must have forced the hand of even those strategists who might have preferred caution. They could not ignore the change in Burhan’s discourse. In a video that had gone viral exactly a month before he was killed, he had threatened Kashmiri policemen, media-persons and other sections of society that did not overtly support militancy. Coming soon after dramatic attacks in which policemen had been killed on the streets of Kashmir’s biggest cities, this crossed a red line that the state could not afford to ignore.

It’s tough to say for sure whether strategists did weigh the pros and cons of killing Burhan adequately. The way things have played out on the ground, though, the basic tactic of eliminating him was obviously a bad idea. Assuming the official account of the encounter is correct, surely the forces could have surrounded the house where Burhan and his associates were holed up, and closed and held the cordon until the trio ran out of ammunition. He should have been captured and tried impartially. It’s a pity that in his case the establishment appears to have discounted the value of a proper prosecution.

David Devadas is a Srinagar-based journalist