The BJP's Toolkit Is Not Working That Well

Despite the BJP-RSS's repression tactics having a terrifying and chilling effect on the right to protest, two of India's largest movements have taken shape since 2019.

Farmers take part in a parade to support the farmers protesting at Delhi borders in Bengaluru, January 26, 2021. Photo: PTI/Shailendra Bhojak

By now, it’s fairly obvious that the NDA government has a standard toolkit for dealing with what it regards as troublesome movements. The script goes like this:

1. There’s opposition or resistance to the government on some count – students’ rights, democratic rights, the Dalit movement, the protests against the Citizenship Amendment Act, and now the farmers’ movement.

2. The government refuses to meaningfully engage with any of the issues raised by the movement, and meanwhile, the movement grows to the point that straightforward repression becomes difficult.

3. So the police stand on the sidelines as first propaganda and then violence is unleashed by either the Sangh parivar organisations or others. We’ve now seen this in JNU (in 2016 and again in 2020), in Bhima Koregaon, in the Republic Day incidents, and most terrible of all, in the Delhi killings of February 2020.

4. The BJP-RSS then weave a story about how these ‘law and order’ incidents were engineered by the movement. The ‘godi media’ carries this story. Finally, after the media has had enough time to whip up hysteria, investigative agencies arrest people who had a peripheral or non-existent role in the protests in the first place – the likes of Sudha Bharadwaj, Umar Khalid, Sharjeel Imam, Disha Ravi. Those arrested are demonised by the ‘godi media’ and the Unlawful Activities (Prevention) Act (UAPA) is invoked most of the time. The courts either simply fail to examine the evidence (or lack thereof), or acquiesce because of the UAPA.

The fact that the allegations are absurd is part of the ploy, since the intent is to produce fear. Disha Ravi or Sudha Bharadwaj are arrested on the basis of patently ridiculous claims (the “toolkit” as a Khalistani conspiracy, unsigned “Maoist letters” found lying on laptops). Kanhaiya Kumar faces sedition charges on the basis of slogans he never raised and for whom the main evidence is a doctored video. Meanwhile, on the flipside, Kapil Mishra openly threatens violence, thugs storm the country’s top university while the police wait outside, and Sambhaji Bhide faces no accountability. In short, the message being sent is very clear – anyone with the RSS-BJP is free to engage in terrible crimes, while anyone who isn’t is not safe. 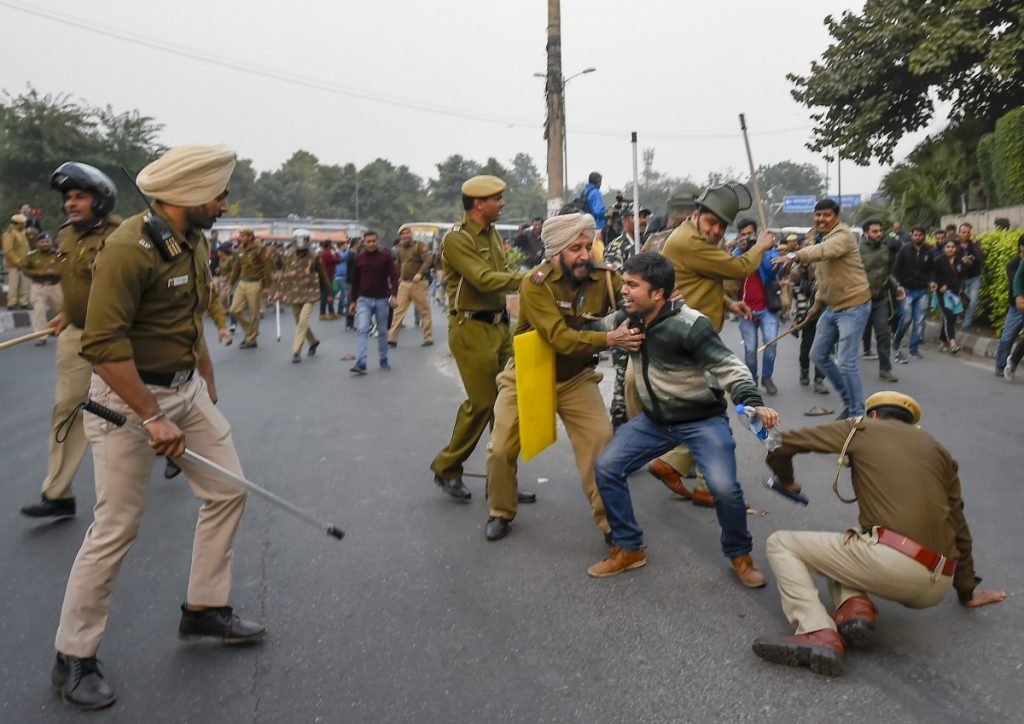 JNU students lathi-charged by the police during their march to Rashtrapati Bhavan, in New Delhi, December 9, 2019. Photo: PTI/Kamal Singh

The same ‘toolkit’ has also been followed at the more local or micro level, and the combination of these macro ‘national’ level cases and the local ones results in fear across the board.

Is it working well?

But there’s a problem. Despite all this, the ‘toolkit’ is not actually working that well.

Let’s look at the various things it is supposed to achieve. If it is supposed to terrorise movements into silence, it hasn’t done that. The farmers’ movement is still going strong, an incredible three months after the protests at Delhi’s borders began. Even the NRC-CAA movement did not collapse in the wake of the Delhi killings – just kilometres away from the violence, the women of Shaheen Bagh continued their heroic defiance, as did many other protests across the country. Had it not been for the pandemic, those protests would probably have continued too.

Meanwhile, the BJP started backpedalling from the NRC as soon as the movement began, and chose to go silent on the CAA (except for the Union home minister’s recent, ridiculous claim that framing of the rules has been held up by the coronavirus pandemic – which notably did not stop the government from three labour and farm laws). The student movement remains vibrant, and the network of solidarity that was forged across universities after the Jamia violence in 2019 showed is encouraging. Indeed, the very fact that the post-2019 years have seen two of the largest mass movements in India’s history should put paid to any idea that the ‘toolkit’ is achieving its primary goal.

Also Read: The BJP Has Its Own Toolkit to Go After Dissidents Which It Uses Ruthlessly

So is the ‘toolkit’ then supposed to terrorise dissenting intellectuals, dissenting media or other similar forces into silence? It hasn’t really achieved that either. It has had a tremendous chilling effect, true. But it hasn’t resulted in silence – far from it.

The one “success” this toolkit does indisputably have is, however, to galvanise the Sangh’s base. The floating population who are sympathetic to saffron ideals are drawn into conspiracy theories that induce a sense of solidarity with the Sangh’s bigotry, and renew their faith in a party that has singularly failed to deliver on most fronts. This is critical to the BJP-RSS combination, since their appeal between 2014 and 2019 – even as it appeared to grow in numbers – narrowed to a handful of issues limited to, as some commentators argued in 2019, “strength and security, both defined in terms of repression, hatred and violence.”

But even this “success” may not be a good thing for the BJP, for multiple reasons.

First, simply by talking of dark conspiracies, the ‘toolkit’ also conveys that the ruling establishment is ultimately failing to keep the country safe. But if you are a true believer in the ‘toolkit’, this implies you have both a right and an obligation to set up your own private outfit to engage in more “action”. After all, the evidence shows that you will enjoy impunity if you do, and as per its own admission, the government is not able to stop the “anti-nationals” anyway. As a result, both Kapil Mishra and Arnab Goswami have created their own “nationalist” organisations, with Mishra’s already busy peddling fake news and organising ‘true nationalists.’ In contrast to many older Sangh offshoots, these new private armies are explicitly built around aggrandising particular individuals. In this, they take after Yogi Adityanath more than they do after the RSS. 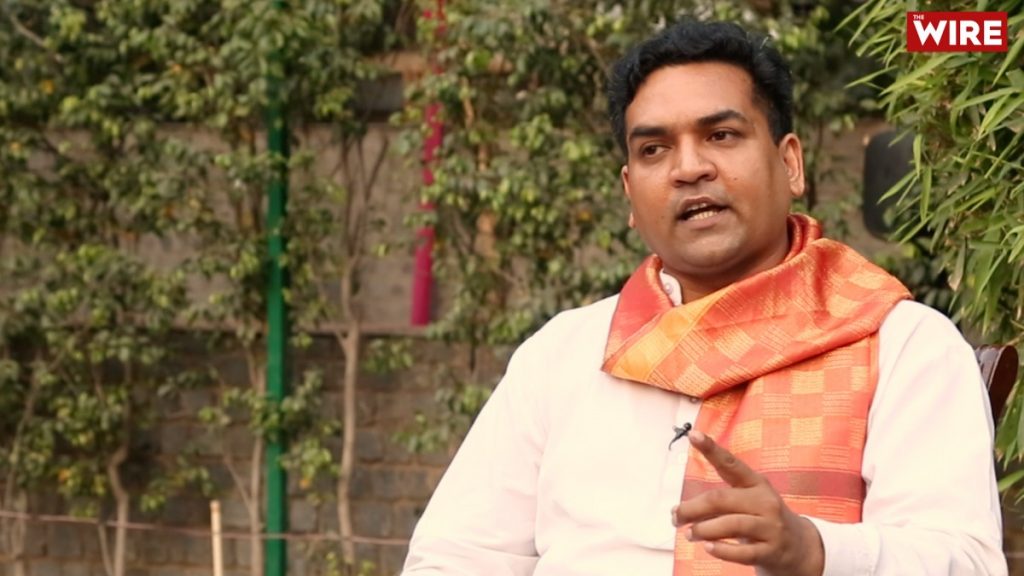 Besides, alongside these self-aggrandisers, playing along with toolkit-style chicanery requires at the least being inconsistent and at the worst being openly mendacious. This draws people who are pliant at best and opportunists at worst – and in either case, they are not reliable. Republic TV has seen periodic waves of resignations by journalists who belatedly discovered their conscience. The same Param Bir Singh who was censured by the Bombay high court for grandstanding with “evidence” about the Bhima Koregaon accused then went on to lead the charge against Arnab Goswami and the BJP. One FIR in Kerala was enough to make Zee News’ Sudhir Chaudhary suddenly (and very briefly) discover the value of actually talking about Islam’s tenets instead of spouting lies.

In short, repeatedly using the toolkit makes the Sangh and the BJP rely more and more on people who are either not committed to their organisational form – the “new nationalists” – or are not committed to them ideologically – the opportunists. All of this works as long as there is a binding glue of power that holds everyone in line and provides a guarantee of impunity. When that glue isn’t there, however, the structure suddenly looks a lot more fragile.

Also Read: Behind the Social Media Face of a Violent Hindutva Activist Lies an Entire Ecosystem of Hate

This becomes a particularly acute problem because of the last and possibly most profound impact of the ‘toolkit’. Any tactic that galvanises one side of a conflict is likely to also galvanise the other side. Using the ‘toolkit’ solidifies solidarities among those opposed to these forces. Since the ‘toolkit’ is so extreme and involves the three institutions people are supposed to trust with their rights – the police, the judiciary and the media – those targeted have nothing left to turn to except mutual solidarity. This is a qualitative shift because one’s politics are now a question of safety rather than just one of policy. As a result, the ‘toolkit’ hardens policy disagreements into implacable anger and opposition. Each use of the toolkit has seen a new, large audience undergo the same shift. The most recent turn of the screw has now seen what seems to be the entire state of Punjab, a large section of American liberal opinion and significant sections of Haryana and western UP shift in this manner. Six months ago the spectacle of tens of thousands of Jats in western UP attending anti-BJP mahapanchayats would have been unthinkable.

This point is often dismissed by claims that the BJP won’t immediately lose elections from such shifts.  Indeed, the BJP itself seems to be making that calculation. But political change is built out of longer-term trends than the next election. A ‘toolkit’ that fails to achieve its goals, weakens one’s own organisational cohesion, and strengthens the cohesion of one’s opponents, is not a very good ‘toolkit’. Is it still a terrifying one? Yes. But is there hope for democratic rights? Absolutely.