The Absurdity of Jat Reservation

Rather than recklessly expanding the beneficiary, what is needed is to address India’s economic stagnation and removing weaknesses in reservations. 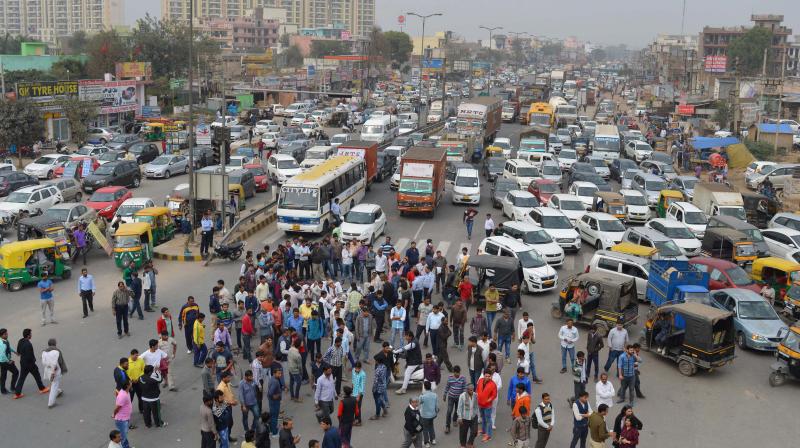 When the Gujjars blocked the national highways around Delhi, people wanted to know their story. Their dismal condition evoked a grudging sympathy, more so in contrast with their Meena neighbors who had the scheduled tribe tag. But a similar belligerence by the Jat community has met with shock and disbelief. It is plain absurd that a community that dominates every sphere of a state’s life should cry discrimination.

Albert Camus describes absurdity as something that appears illogical but not logically impossible. For instance, absurdity strikes you in the face when the supposed victims of economic hardship use expensive SUVs to block roads in Gurgaon! So will it be absurd by the same logic if the Brahmins start believing that they are victims of the Varna system? Or will it be absurd if the Rajputs of Rajasthan declare a war on New Delhi because some of them feel they are being pushed around?

For the record, a section of Rajasthan’s Rajputs have been at war for over a decade with tacit support coming from all political parties. And for years the Brahmins in North India, Gujarat and Kerala have been demanding reservation on count of discrimination. Rajputs and Brahmins, the original tormentors in the Varna system, have joined hands to form a Social Justice Front in Rajasthan. In Punjab, some Brahmins have formed a self-styled Parshuram Sena, which stands up for their oppressed brethren!

Fortunately for now, talks with the Jats have started in Haryana after 11 deaths and injuries to 150 people, although the barricades have not been lifted everywhere. The agitating Jats have been promised a favourable bill in the next assembly session. The neighbouring Rajasthan already has reservation for Jats under the other backward class (OBC) category, but the National Commission for Backward Classes (NCBC) denied similar claims of backwardness to Jats in Haryana, Uttar Pradesh, Madhya Pradesh and Delhi. The Supreme Court too rejected their claims on the central OBC list. But, what legal battles could not get them in years was almost yielded in less than ten days of violence and mayhem.

The most shocking thing about the agitation is the degree of aggression on display and the spontaneity of its spread. India is no stranger to destruction of public property during protests but it takes a dominant caste to burn down police posts and railway stations, cut off water supply to the capital, and block the army vehicles. Even a martyr’s body (also a Jat) could not be taken home and had to be flown in.

The politics of reservation

Jats are to Haryana what the Patels are to Gujarat, the Rajputs to Rajasthan and the Marathas to Maharashtra – the dominant castes, without a doubt. Some of them are poor but most possess land, cattle, businesses, muscle power or political clout. What is common between all these peasant castes ­­– and many others in North India such as Lodhs, Kurmis, Yadavs and Koeries – is that their landholding is fragmenting fast. Having prospered after the green revolution, these castes are now facing agrarian distress and deep stagnation in the rural economy. Two successive droughts and untimely rains have worsened the crisis. Their anxieties are real, never mind the absurdity of their situation.

According to the National Sample Survey (NSS 59th round), the average land holding in India came down from 2.63 acres in 1960-61 to 1.06 acres in 2003-4, or about 60% in four decades. A CSDS study of the farmers in 18 states of India has confirmed the NSS findings that given the choice, a substantial number of farmers would prefer to do something else. For the peasant castes the easiest way out of this predicament is an urban job, preferably in the police or the army.

The implementation of the Mandal Commission report in 1989 benefited some peasant communities at the cost of many others. But once it happened, no politician or party was able to counter it. Even those who cried foul and challenged Prime Minister V P Singh, its architect, were forced to eat their words. Ten years later the game was upped by the first BJP prime minister, Atal Behari Vajpayee, when he announced reservation for the Jats on the eve of elections in three north Indian states, including in Rajasthan where he made the announcement at an election rally.

Following this, the NCBC issued a notification to included Rajasthan’s Jat community among backward castes, with the exception of those from the erstwhile princely states of Bharatpur and Dhaulpur. The commission is said to have made a grave mistake: it used 1931 Census figures to gauge backwardness of a community without factoring the rise of agricultural communities after the post-independence expansion of irrigation.

Grievances over reservations existed before Mandal but they did not lead to serious conflicts or turmoil. There was also the realisation that its net effect was more integrative than subversive and that it empowered the poorest. But Mandal brought in its wake, besides a new breed of identity politics, a spate of violence and unrest which keeps recurring at an alarming frequency. It also opened a Pandora’s box of new set of demands coming from hitherto unknown or unpredicted sections, of which there are thousands in India.

But in spite of all its traction, the OBC politics did not help Singh come back to power. Vajpayee’s election eve bonanza to Jats too failed to yield desired results for the BJP in 1999 and the extension of the same did not benefit the Congress in 2014. In Rajasthan the Jat reservation created new imbalances for the other OBC communities and in many competitive exams the better educated and prosperous Jats cornered two third of all seats, general and OBC. It is worrying that the obvious lesson for other peasant communities is to assert and prevail wherever they have the numbers.

What is so absurd about knee-jerk legislations is that rather than providing comfort to the poorer OBCs with little assets, it forces them to compete against their powerful neighbours. A rational answer lies more in addressing rural India’s economic stagnation and removing weaknesses in reservations through consensus rather than recklessly expanding the list of beneficiaries. It also puts the whole idea of reservations on its head. The founding fathers of the Constitution had dreamt that the ultimate aim of the job reservations was to annihilate the caste system. But the post-Mandal politics ended up nurturing the curse of caste by rousing a hysterical politicisation of all caste groups.

Vipul Mudgal is Director and Chief Executive of Common Cause. He also heads the Inclusive Media for Change project at CSDS.