The 2021 Kerala State Election Will Be Historic. Here’s Why.

Odds from voter turnout data this time favour the Left Democratic Front breaking the state’s pattern of voting out incumbents. Soar above the dense thicket of Kerala’s party politics, where parties have forked, branched, rebranched, and tangled here and there. Soar high to break free from the din below – of claims that a vacillating ethnic leader or another, a shifting ally, or a superannuated technocrat is going to change the state’s electoral outcomes. From that high vantage, two things — two certainties of Kerala politics — stand out: first, power alternates between the Communist-led Left Democratic Front (LDF) and the Congress-led United Democratic Front (UDF) every election. Second, voter turnouts far higher than the Left’s vote base in the constituencies undo the LDF.

When the 2021 Kerala state election results will be declared on May 2, one of these two political certainties will be shattered. For the first time in four decades, an incumbent will very likely retain power in the state. The Communist voter base probably would have ensured that the LDF prevailed.

The base and superstructure

The Communist electoral base in the state consists of steadfast voters. They unfailingly vote in every election whatever the reasons — civic duty, partisan solidarity, or the thrill to see their side trounce rivals. This voter base scripts LDF victories and shapes the state’s political outcomes, by delivering its vote share for the alliance unwaveringly.

On average, the Communist vote share in the last two elections shifted a mere 3.4 percentage points across 140 electoral constituencies, with most constituencies tightly clustered around that average (indicated by a low standard deviation of 3.1). Contrast these to the eight-point swing and 5.1 standard deviation in the Congress Party’s vote share during the same period. Unlike the shifting vote share of the Congress, the Communist voter base thus is a reliable predictor of state electoral trends. 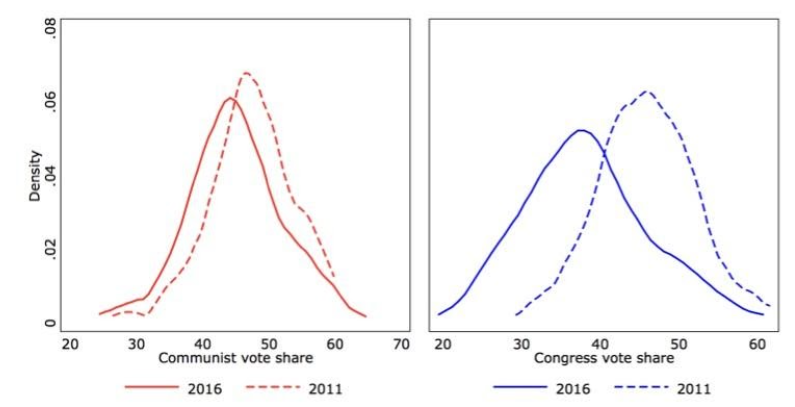 One such trend is a political certainty: when voter turnout in the constituencies is greater than the LDF’s vote base, electoral odds favor its rivals. The mathematical and political reality underpinning this is that, as the turnout in the constituencies swells beyond the LDF’s vote share, the odds of an LDF win will diminish — unless it successfully recruits at least a new voter to its base for every two voters of its rival.

Thus, turnouts higher than the LDF’s vote share in the constituencies usually sink the alliance’s electoral prospects. History shows that the point at which electoral odds dwindle for the LDF varies — depending on whether or not the alliance is in power in the state.

Also read: What BJP Votes Will Mean For the Kerala Assembly Elections

In comparison, in 2011, when the LDF was in power, its odds declined to 50% when turnout outstripped its previous vote share by just 25%. We now know that the slow deterioration in LDF’s odds in 2016 took it to power in the state, whereas the rapid decline in odds deprived the alliance power in 2011. 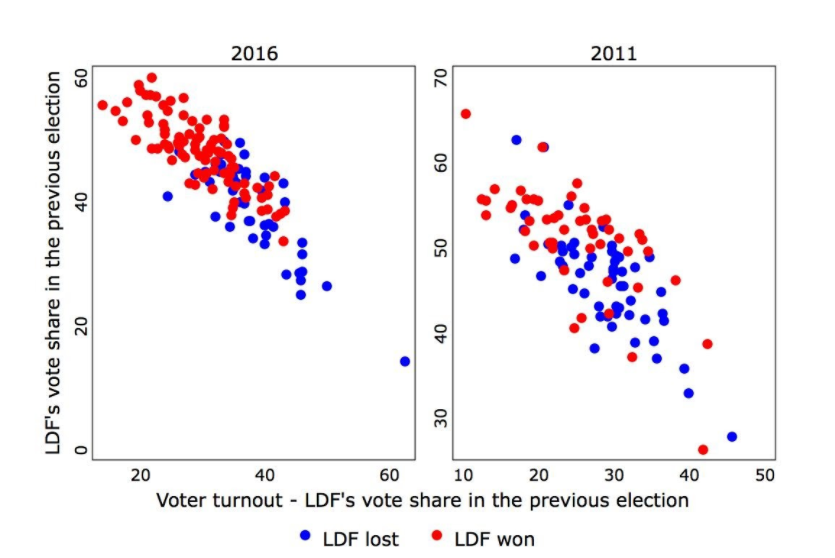 That the LDF’s electoral prospects declined when turnout topped its previous vote share both in 2016 and 2011 suggests that the trend is not merely anti-incumbency at play. Nor is it the case that higher voter turnouts generally tips the scale against the cadre-based LDF in favor of its political rival, the UDF. The Congress alliance had no better odds of winning constituencies with high turnout than in low turnout ones, nor in constituencies where overall turnout increased in 2016. The UDF’s odds of winning seats are not higher either in high turnout constituencies or when turnout increases.

The political realities of Kerala elections are not shaped so much by overall turnout as they are by voting in excess of the LDF’s vote base. The two are different, and only weakly related (for instance, the correlation coefficient between the two in 2016 is 0.29).

History in the making

The variation in that factor shows that the 2021 state election falls between the 2011 and 2016 elections, is closer to the pattern of 2016 and, thus, favorable to the LDF. Distributions display constituency-level data on turnouts in excess of the LDF’s vote share in 2011, 2016 and 2021state elections. The distribution of the 2021 election overlaps the 2016 distribution more than the 2011 distribution.

On average, the constituency-level pattern in 2021 is twice as distant from the 2011 pattern as it is from the 2016 pattern. This is not surprising. Pre-election surveys already suggested that the LDF did not face voter-resentment it suffered from in 2011, and that the incumbent chief minister enjoyed broad approval in the state. Politically, 2021 is thus closer — but not identical (The LDF no longer enjoys the advantage of offering a novel governance platform that it did in the last election) — to 2016 than to 2011.

Also read: Watch: How Are Muslims Voting In the Kerala Elections?

Cautiously though, the odds of LDF victories in 2021 can be averaged between the odds of the 2016 and 2011 elections. By this conservative estimate, the LDF should retain power with 78 seats in the newly-elected state assembly — seven seats more than the minimum needed to form the government. 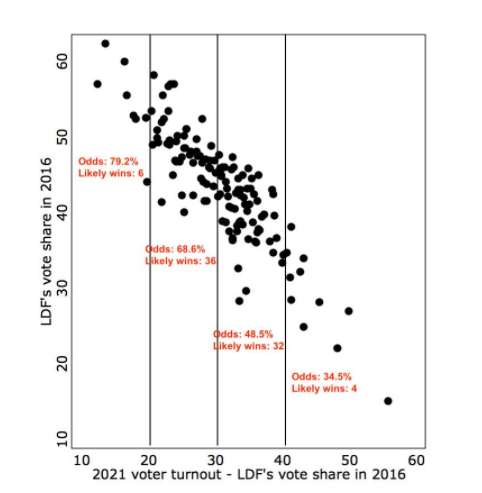 Regardless of where the chips may eventually fall, the 2021 Kerala state election will be historic. This year, only one of the state’s political certainties will hold. The Communists will either lose power — even when odds favor them — and the state would reaffirm its commitment to the alternation of power between the two alliances. Or, more likely, the Communist voter base would have once more scripted another LDF victory and made political history.

Anoop Sadanandan is a political economist.