In most statements that political leaders and prominent personalities gave, there was a tacit assumption that the four accused were deliberately killed. 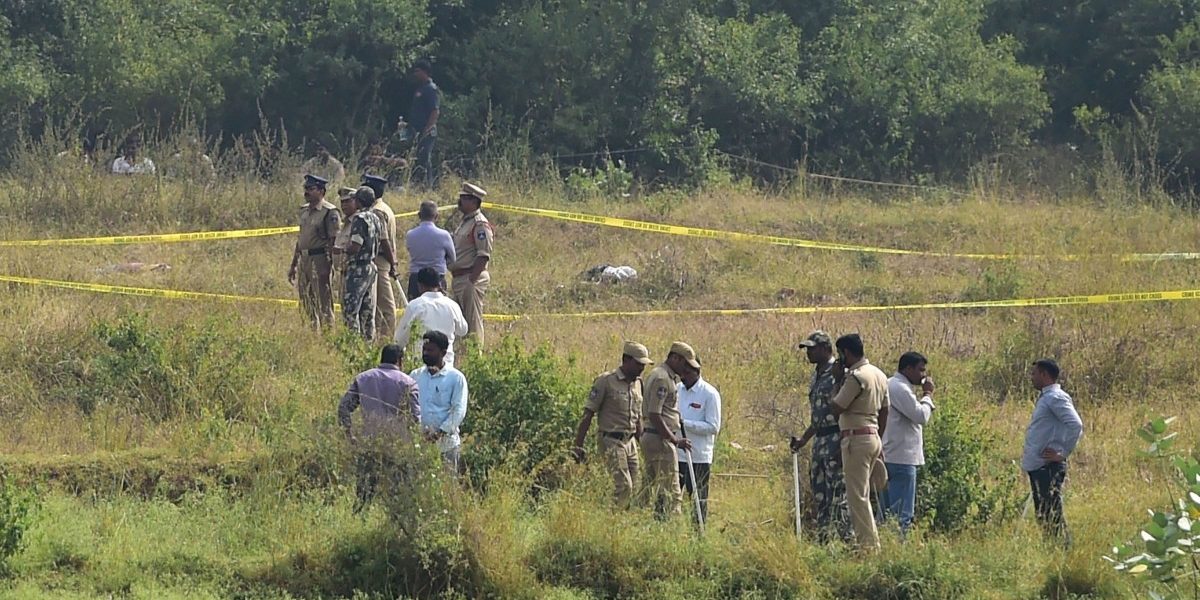 Telangana Police at the scene of the encounter. Photo: PTI

New Delhi: In what may set a dangerous precedent, the Telangana police killed all four people accused of raping and killing a Hyderabad-based vet in an alleged encounter early Friday morning. The police have said that its team had to fire in self-defence when the four accused tried to flee from the site where they had burnt the woman’s body. It claims that the accused were taken to the site for “reconstructing” the crime.

Questions, however, remain on why the police took the accused persons out to “reconstruct” the crime in the middle of the night. According to available information, the encounter happened at 3 am on Friday.

Most political parties and leaders responded to the encounter with different degrees of caution and celebration, while many civil society groups and prominent lawyers condemned the police action that came ahead of a trial for the four accused. While some said that the police made a mockery of the Indian criminal justice system by killing the four, many others viewed the encounter as legitimising mobocracy.

In most statements that political leaders and prominent personalities gave, there was a tacit assumption that the four accused were deliberately killed, quite contrary to the Telangana police’s claim that they were casualties in an encounter.

Reactions from Telangana and Andhra Pradesh

In Telangana, barring the Bharatiya Janata Party, most other parties welcomed the police action.

Kanumuru Raghu Rama Krishna Raju, a YSR Congress MP, said, “They deserved to be shot dead. God has been kind that they were shot dead, this is a good lesson. They tried to run away and they were killed. No NGO should oppose it and if they do so, they are anti-national.”

Minister in the Telangana Rashtra Samithi government Gangula Kamalakar said that the killing of the rape accused demonstrated the prowess of the Telangana police.

TRS working president and IT and urban development minister K.T. Rama Rao said in a similar vein, “Being in the government I cannot immediately hang them (accused) in public. We are bound by the constitution. We have to work as per the law. At the same time i understand the anguish of those who demanded immediate capital punishment for the accused in the Disha rape and murder case. Their fury is justified.”

The Communist Party of India’s national secretary K. Narayana, in a departure from his party line which advocates the right to a fair trial for all accused, said, “I defend encounter killings in rape cases. Such deterrent police actions are essential to send a strong message across society to prevent recurrence sexual assaults on women.”

Andhra Pradesh home minister Mekathoti Sucharita tweeted a quote from the Bhagavad Gita, “Paritranaya sadhunam vinasaya cha dushkrtan dharmasansthapnaya yuge yuge (To protect the righteous, to annihilate the wicked and to establish the principles of Dharma I (God) appear on this earth age after age).”

BJP’s state unit, however, was far more restrained in its response. “BJP feels Hyderabad encounter incident is still premature to react…Disha gang rape & murder is a horrendous crime, BJP has condemned it, and as a responsible opposition party has also pressured the Telangana State government to act and bring the accused to justice. However, India is not a banana republic and is bound by legal and constitutional framework. Politics over crime, cannot set a right precedence. Telangana State government & DGP of Telangana should convene a press conference immediately,” said K.Krishna Saagar Rao, chief spokesperson of the Telangana state unit.

What did national leaders say?

Most political leaders from across the country too appeared to either justify or welcome the police action.

Delhi chief minister and Aam Aadmi Party leader Arvind Kejriwal told the media, “The rape cases that have come to light of late, people are in anger whether it is Unnao or Hyderabad, so people are expressing happiness over the encounter. It is also something to be worried about, the way people have lost their faith in the criminal justice system. Together all the governments will have to take action on how to strengthen criminal justice system.”

Rabri Devi,RJD on Telangana encounter: What happened in Hyderabad will act as a deterrent against criminals surely, we welcome this. In Bihar as well, cases of crimes against women are increasing. The state Govt here is lax and doing nothing. pic.twitter.com/5yMP5e0Han

Former UP chief minister and Bahujan Samaj Party chief Mayawati presented Telangana police as a role model. “Crimes against women are on the rise in Uttar Pradesh, but the state government is sleeping. Police here and also in Delhi should take inspiration from Hyderabad police. But unfortunately here (in UP) criminals are treated like state guests; there is a jungle raj in UP right now,” she said.

Chhattisgarh chief minister Bhupesh Baghel said that the police may have been forced to shoot the accused as it had no other option.

Chhattisgarh Chief Minister Bhupesh Baghel on all four accused in rape&murder of woman veterinarian in Telangana killed in encounter: When a criminal tries to escape, police are left with no other option, it can be said that justice has been done. pic.twitter.com/5kw96wG34q

Samajwadi Party MP Jaya Bachchan, who had called for the public lynching of rapists in the Rajya Sabha, congratulated the police. “Der aaye, durust aaye (Better late than never),” she said, indicating that such action should have been taken in other cases too.

Trinamool Congress MP Locket Chatterjee also supported the Telangana police action. Such encounters should be made legal, she said, while thanking the Hyderabad police for such a step.

“This is a very good step taken for our country. I felt really good when I read this news in the morning. The soul of the rape victim must be at peace now. Her family must be at peace,” she said, adding in all such cases culprits must be hanged within seven to 15 days.

During Zero Hour in Lok Sabha, BJP MP Meenakshi Lekhi said police had to open fire when the accused tried to escape. “Police ko hatiyar sajane ke liye nahin diye gaye (Police have not been given weapons for keeping as show piece),” she said.

Dissidents in the crowd

Kavita Krishnan of the Communist Party of India (ML-Liberation), who is also a prominent women’s rights activist, and Maneka Gandhi of the BJP condemned the killings, which they alleged were extra-judicial.

Governments and police which fail women, and while habitually blame victims and pillory survivors of sexual violence, are posing as saviours of women, over the dead bodies of four unarmed, imprisoned men they shot dead.
This is NOT what victims want https://t.co/B6JxMF80xo

#WATCH Maneka Gandhi:Jo hua hai bohot bhayanak hua hai desh ke liye. You can’t take law in your hands,they(accused) would’ve been hanged by Court anyhow. If you’re going to shoot them before due process of law has been followed, then what’s the point of having courts,law&police? pic.twitter.com/w3Fe2whr31

Although there has been no official statement from the Congress, party leader Sharmistha Mukherjee demanded an “unbiased inquiry” into the incident. “If the police version is right that they (accused) wanted to flee, then you cannot allow those who have committed such heinous crimes to get away,” she said.

“But, on the other hand, there was a lot of public outrage and public pressure on the government. If the government has taken any step under public pressure that could be an extra judicial killing, then that is a very dangerous situation for the country because it will set a precedent,” she added.