How KCR May Have Given the BJP a Way Into Telangana

The newly introduced 12% reservation for Muslims in Telangana could help the BJP make political inroads into the state. 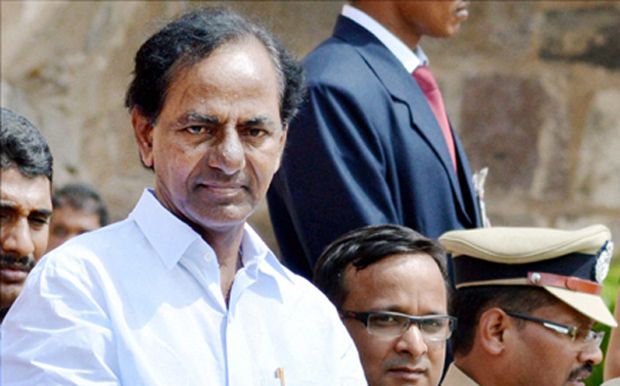 For years the BJP has been trying to get a toehold in Andhra Pradesh – even when the state was undivided. After Telangana was created in June 2014, the BJP intensified its efforts, but positive results didn’t come by. But now, a golden opportunity has landed at the doors of the party, courtesy the Telangana Rashtra Samiti (TRS).

On Easter Sunday, a holiday otherwise, Telangana chief minister K. Chandrasekhar Rao (KCR) successfully piloted a Bill through the assembly providing 12% reservation for backward Muslims and 10% for scheduled tribes, taking the total reservation up to 62% and exceeding the constitutionally-mandated limit of 50%. Telangana ‘hopes’ to get the cooperation of the central government to incorporate the reservation in the ninth schedule of the constitution, which will help the legislation bypass judicial scrutiny. The reservation is for government jobs and admissions to educational institutions.

But cooperation from the Union government cannot be expected in this case, even though Tamil Nadu had had 69% reservation for years with the consent of the Union government. Speaking to the Telugu media in Delhi a day before the Bill was passed, Union minister of social justice Thawaarchand Gehlot said his government had not received any proposal from the Telangana government. Gehlot also said the KCR government was not following the set procedure for reservations, which included a reference to the registrar general of India and the National SC/ST Commission. Meanwhile, Gehlot’s minister of state, Ramdas Athavale, asserted that 80% of backward Muslims had been taken care through the implementation of the Mandal Commission recommendations.

Even as the Bill was being considered, the five BJP MLAs raised an uproar in the assembly, as a result of which they were expelled from the House and were bodily taken out by the marshals. They were later arrested while protesting outside the assembly building. The agitation is set to intensify this week with BJP leader and Union minister Venkaiah Naidu warning that reservations for Muslims will lead to the “creation of another Pakistan”. Kishan Reddy, BJP floor leader in the Telangana assembly, said, “The Centre will not entertain communal reservations as they will create division amongst communities”. The BJP is likely to play its card of ‘minority appeasement’ to full effect in the coming weeks.

Muslim parties like the Majlis-Ittehadul-Muslimeen and Majlis Bachao Tehreek welcomed the passage of the Bill saying that it was a “historic move” that would correct the “fault lines of history” at a time majoritism is on the rise. A leading Muslim public figure, Rashid Khan (name changed on request), said, “With this you can expect 100% of the Muslim votes to go to TRS in the future”. Similar ecstasy can be seen across social media, with many Muslims calling the move ‘bold and gutsy’.

But analysts are circumspect. They aver that after winning the UP election by consolidating ‘Hindu votes,’ the BJP will try to do the same in Telangana, which has been free from communal tensions. “If it was shamshan versus kabristan in UP, they are going to use the same formula in Telangana arguing why reservations on religious lines for Muslims alone? This will give them an opening to polarise Hindu votes at a time there is a great demand from youth for government jobs. The Hindu youth can be sold the line that they are not getting jobs because they are being taken away for Muslims,” said Sudhir Srivinas, a college teacher.

Incidentally Amit Shah had planned to visit Telangana last week to finalise his party’s electoral policy for the state. However he inexplicably postponed the trip by ten days citing ‘emergencies’. Perhaps Shah wanted to wait for the Muslim reservation Bill to be passed and the temperature to be suitably raised before making an appearance.

Reservations for Muslims in Andhra Pradesh was introduced by then Congress chief minister Y.S. Rajasekhara Reddy in 2004. However a 5% reservation was shot down by the Andhra Pradesh high court, which said religion-based reservations was not as per the constitution. Later, the Supreme Court reinstituted the reservation in an interim order – but allowed only 4% so that it would remain within the cap of 50%.

TRS sources say that they are aware of all this and therefore the Bill didn’t propose reservation on religious grounds, but on ‘backwardness’. “Are Muslims not our citizens? When backward groups in every religion are being provided with relief why not Muslims?,” KCR breezily asked in the assembly. Incidentally, 12% reservations for Muslims had been promised by the TRS in its 2014 election manifesto and KCR had been under pressure to fulfill this promise. In the interim, KCR had also appointed a Muslim deputy chief minister but he is sans any power and is generally seen as ‘nondescript.’

Analysts say that alongside raising the political temperature, the Bill will most likely land up in the courts. BJP spokesman Krishnasagar Rao has indicated that the party can go to the court because the state government has proposed to raise reservation even as the matter is sub-judice in the apex court.

“KCR knows this. But he is only interested in votes. Now even if the move is stymied the Muslims will see TRS as their saviour and vote for the party,” a political analyst said. Muslims comprise 9% of the population in Telangana.

The BJP will also gain an entry into Telangana politics, something that it has been desperately looking for. But the party that will be left high and dry will be the Congress, which had led the way for Muslim reservations. The situation is much like what led to the creation of Telangana. The new state was formed only because Sonia Gandhi assented to it but all credit was taken by the TRS in the elections that followed the announcement. On Sunday, Congress party members quietly supported the Muslim reservation Bill as it was unanimously passed (after the BJP MLAs were evicted) knowing full well that all the credit would go to the TRS. Telangana Congress chief and former IAF fighter pilot Uttam Reddy now sports a beard that he has vowed to shave off only after evicting KCR from power. It might be a while longer before he can do that.