Loom workers are struggling to make ends meet and the double whammy of demonetisation and the GST has made matters worse. Sircilla: The campaign for Telangana polls is literally in the air. A visit to the Sircilla constituency shows makeshift campaign vehicles of parties blaring out rehashed folk songs. A local reporter says that the original tunes were composed by the cultural wing of left-wing extremists, which drew the ire of the law enforcement agencies. They were “mainstreamed” in the wake of the statehood movement.

Sircilla, once declared a disturbed area in the late ’70s, was a hotbed of the ultra-left movement. Those who spearheaded the movement in this town are said to be heading the left-wing extremist activities across the nation now. The area, though free of any extremist activity now, however doesn’t present a rosy picture. With the state set to vote for assembly polls on December 7, its time to take stock of the situation here.

The town, a part of the erstwhile Karimnagar district, is itself currently a district headquarter. It is represented in the state assembly by K.T. Rama Rao (KTR), the scion of caretaker chief minister K. Chandrasekhar Rao. While KCR is the typical crowd puller, KTR is the suave face for the corporate sector. He held the portfolio of textiles along with that of municipal administration and information technology.

Also Read: Anti-Incumbency Is a Key Issue in the Telangana Assembly Elections

Sircilla hogged the headlines again in the 1990s owing to a slew of suicides of textile workers. The sector has since not seen much improvement. Coupled with failed promises over the years, the fact that the parties have no definitive roadmap for the sector presents a bleak future. There is no national level policy either.

The condition of units in the Sircilla textile park mirrors the deep crisis. Annaldas Anil, president of the units in the textile park, says that deaths of textile workers became a national issue under the first NDA government. “To address the crisis, the then united Andhra Pradesh government started 11 textile parks in 2002-03, but units came up only in Sircilla. The 65 acre park with 220 industry plots was set up to make export quality cloth. There was less value addition in the earlier handloom units,” he says. 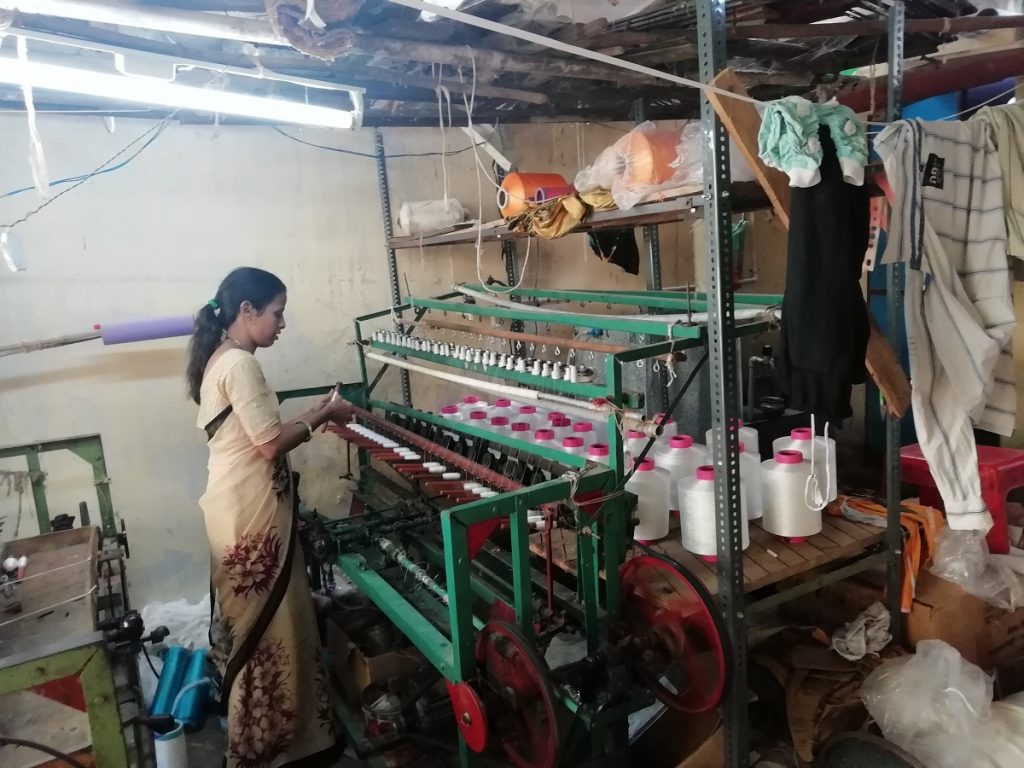 Many of the units are in a state of disarray. Credit: G. Ram Mohan

The units began to be set up only in 2005, after the Y.S. Rajasekhar Reddy government reimbursed 50% of power cost. But over the years, many have been closed and only 111 units are now functional, says Anil. They produce three lakh metres of cloth worth Rs 200 crore and provide employment to 1,500 workers.

Anil says demonetisation and the Goods and Services Tax (GST) have worsened the crisis. “Only the corporate sector has benefitted under the new tax regime. Textile hubs like Surat, Panipat and Bhiwandi have taken a severe beating. The tax started with 18%, which was reduced to 12% and then to 5%, after we struck work along with other hubs,” he says.

Imports from China and Bangladesh also affects the situation. “The textile sector is the biggest employer after agriculture. We need to be protected. By signing up for the GST, the state has given up the independence to provide impetus through tax rebates. Textiles should be free from GST like agriculture,” he adds.

Anil says that the power loom sector is surviving only because of seasonal orders for sarees placed by the state government. The government distributes sarees for Bathukamma (a local festival during Dasara), Ramzan and Christmas.

Also Read: Telangana’s Grand Alliance Threatens to Topple the TRS. Here’s How It Got There.

Konda Pratap, vice-president of the weavers’ association in Sircilla, says that the government hasn’t provided any relief apart from continuing the power subsidy for looms. “Of the Rs 218 crores released for Bathukamma sarees, only Rs 165 crore was spent on sarees. The government claimed the remaining amount was spent in distributing them. We smell a scam in this,” adds Pratap, who is also a Congress party worker.

To improve the situation, government intervention looks inevitable. CPI(M) district secretary P. Ravi says there was a demand that the government purchase cloth from these looms for its workers and employees. It was accepted by KTR, but was not implemented, he adds.

Ravi claims that of the Rs 165 crore spent for procuring sarees, ten close associates of the Telangana Rashtra Samithi (TRS) bagged Rs 80 crore worth of contracts. “The government claims there have been no hunger deaths, but four workers ended their lives over the past four months,” he says.

Transportation adds to the cost that the looms have to bear. “Transporting yarn from Silvassa adds Rs 3 per metre. We need a subsidised yarn bank to cancel out the disadvantage created by the GST,” says Anil.

The lack of a processing (dyeing) industry is another dampener. “The power charges are high. Tamil Nadu provides 700 units free of charge. In Sircilla, some units do get subsidised power, but not in the textile park,” says Mr Anil. He adds however, that the TRS government did reimburse their power charges between 2010 and 2016.

It is therefore not surprising that workers are disgruntled. “After eight hours of work, we do not even earn the mandated minimum wage of Rs 12,000. Many workers from this area are moving to other textile hubs, but even there, jobs are hard to come by,” says D. Mallesh, a power mill worker.

M. Yadagiri, says he owned a power loom, but had to sell it for his sister’s marriage. “Since then I have been driving this auto rickshaw,” he says. 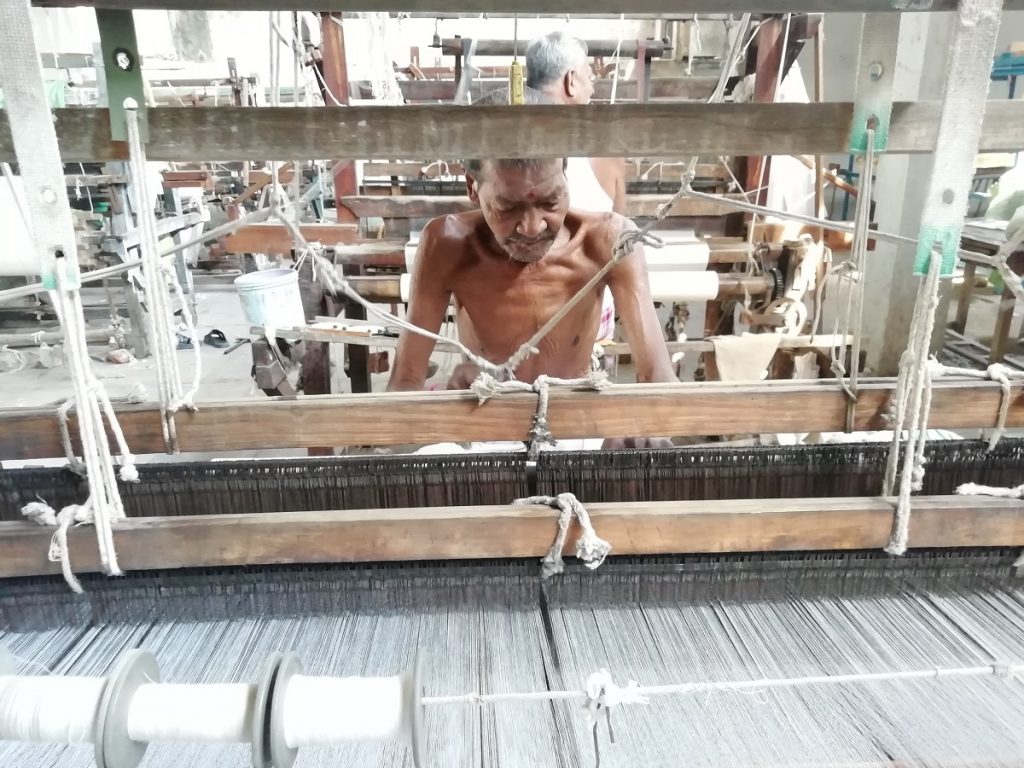 Many of the workers are aged above 70 and strive to make ends meet. Credit: G. Ram Mohan

The most vulnerable section are those in the handloom sector, which accounts for just 5-10% of the work force. At the hand weaver co-operative society, some workers as old as 80 can be seen toiling. The common refrain among them is that their children, who do other odd jobs are unable to take care of them.

“Our children are not well educated. My son wants to take care of me, but he works as a compounder and struggles to make ends meet. The prime minister had promised us Rs 15 lakh. We would be grateful for even Rs 30,000,” says B. Laxman, who is in his 70s.

A frail old man M. Chandraiah (75) unbuttons his shirt and asks us to photograph him while he works. He hopes writing about him will make a difference. “We were getting 35 kg rice under the Antyodaya scheme for poor under the Y.S. Rajasekhar Reddy regime in the united AP. Our cards were cancelled by the TRS regime under an operation to weed out fake cards. Now we are entitled to only 6 kg of rice per person,” he says.

As pensioners, his family is entitled to be provided rice under the Antyodaya scheme. Repeated requests to officials have fallen on deaf ears, he says.

T. Mallesham says that his family is thrown out of their rented houses when they fall sick. “If we don’t get Rs 1,000 as pension, we have no source of income,” he says. He and his disabled wife are meant to receive Rs 1,500 as pension meant for the handicapped.

Officials say they trained handloom workers in stitching new designs and promised to pay between Rs 70 and Rs 150 per metre. But the initiative has been a non-starter as of now.