Is BJP's By-Poll Win in Telangana's Dubbak a Political Game-Changer? 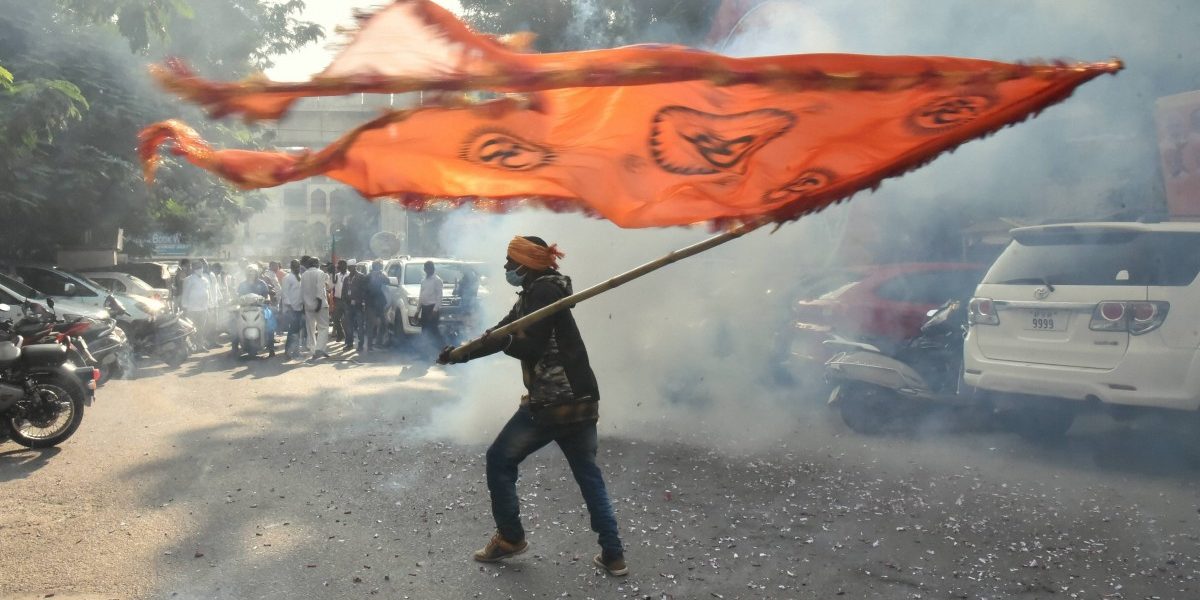 A BJP supporter waves a saffron flag during celebration of the party's win in Dubbaka by-poll, in Hyderabad, Tuesday, November 10, 2020. Photo: PTI

Hyderabad: Dubbak, a nondescript and economically backward assembly constituency in Telangana, has given a wake-up call to the ruling Telangana Rashtra Samithi (TRS) in the state. Tuesday’s electoral outcome saw the Bharatiya Janata Party (BJP) candidate, M. Raghunandan Rao, emerging victorious by just 1,079 votes against the TRS, despite the BJP’s weak organisational network in the state.

Prime Minister Narendra Modi’s tweet describing this as a “historical victory” speaks of the political significance the by-election carries.

The Dubbak by-election was necessitated by the death of sitting TRS MLA Solipet Ramachandra Reddy, and the party fielded his wife Sujatha, hoping to capitalise on sympathy votes over his death. 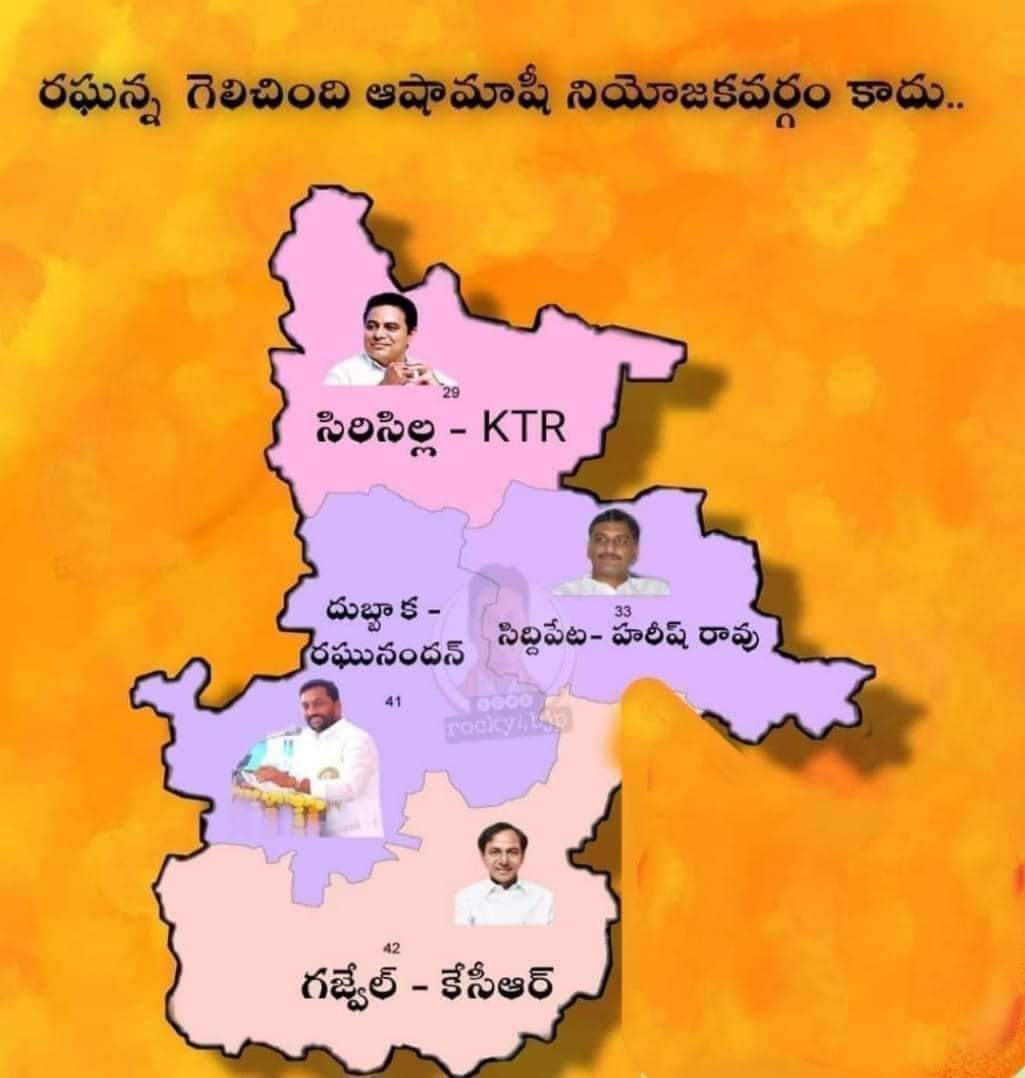 Dubbak serves as a glaring example of what it’s like to play second fiddle to the two VIP constituencies on either side, which are dotted with a cluster of industries, hotels, hospitals and educational institutions. BJP’s Raghunandan Rao succeeded in exposing this perceived uneven development in the area on social media.

Harish Rao, known as a mass leader and poll strategist par excellence, failed to turn the tide in his party’s favour for a variety of reasons as the party’s election in-charge in Dubbak. First, according to insiders in the TRS, Harish had no say in selecting the candidate, as KCR took that job upon himself. Harish Rao, it is said, would have chosen Cheruku Srinivasa Reddy as the candidate rather than Ramalinga Reddy’s widow. Second, as the power politics continues to revolve around KCR and his son KTR (K.T. Rama Rao), the party’s working president, Harish has to play second fiddle to KCR’s immediate family. Because of that, he failed to infuse confidence in the public and rally people behind him in the electioneering, it is believed.

The BJP terms this victory as a “game-changer”, and it is certainly a wake call for KCR. His typical “gadi-like” style of governance, family rule and alleged non-performance regarding poll promises has triggered anti-incumbency, and this election outcome is seen as the tip of the iceberg. K. Nageswar, former member of the Telangana Legislative Council, told The Wire that signs of unrest among farmers, government employees, unemployed young people and other sections began to surface during KCR’s second stint as chief minister.

Quoting the Telangana State Public Service Commission (TSPC) chairman, Nageswar said the KCR government could not fill more than 39,700 jobs in the last six years of rule, which is contrary to his catchy phrase of “neellu, nidhulu, niyamakalu” for Telangana, which he coined during the statehood movement.. Around 2.5 lakh jobs remain vacant in various government departments and 16 lakh unemployed youth are unhappy over KCR’s alleged failure to keep his word.

Also read: Caste, Region and ‘Hindu Rashtra’: The Many Shades of the By-Election in ‘Bangaru’ Telangana

The BJP’s lightweight candidate broke the TRS’s record as a mighty warhorse. KCR’s party has seen a streak of unstoppable electoral victories since its founder took over the reins of the country’s youngest state in 2014. In addition, the TRS has won by-elections held for as many as six assembly segments during KCR’s rule, including Huzur Nagar, a sitting Congress seat held by TSPCC president N. Uttam Kumar Reddy. The BJP, in that election held a year ago, lost its deposit with just 2,639 votes.

Raghunandan Rao fought the previous assembly elections in Dubbak in 2018 and ended up with just 22,595 votes, whereas the TRS candidate, Solipet Ramachandra Reddy, registered a spectacular win against the Congress with a huge margin of 62,500 votes.

The election in Dubbak has reinforced the public perception that the BJP continues to rise in Telangana’s political landscape, emerging as a main challenger for the TRS. That the Congress has relegated itself to third position by securing just 2,819 votes is a clear sign of its gradual downfall, ceding its opposition space to the saffron party. Why is the BJP rising and how is the Congress, which ruled combined Andhra Pradesh for a long time, facing an existential threat?

Analyst Shaik Zakeer attributes the BJP’s meteoric rise to KCR’s flawed strategy and his failure to identify who his main rival is in state politics. KCR systematically decimated the Congress by encouraging defections in the state’s triangular political battle field, leaving the opposition space for the BJP, Zakeer says.

KCR’s decision to team up with Asaduddin Owaisi’s AIMIM with an eye on the predominant Muslim vote bank also apparently provides a breeding ground for the saffron party to grow, on the back what it calls KCR’s “pro-Muslim” politics. The BJP’s steady rise could be observed from the Lok Sabha elections, in which it has bagged four parliament seats, including the one held by KCR’s daughter Kavitha, with nearly 20% vote share. It’s a phenomenal rise when compared with the state elections in 2018, in which BJP has won only one assembly seat with 7.5% vote share.

KCR also left government employees disappointed by failing to increase their age limit for retirement or hike salaries as per the new Pay Revision Commission as he promised. Distress prevailed in the farm sector due to KCR’s failed crop regulation policy.

The pro-BJP outcome is expected to create anxiety within the TRS, which is to face prestigious elections for the Greater Hyderabad Municipal Corporation (GHMC) in the next few months. These elections are prestigious because the state capital, presently ruled by the TRS with 99 out of 150 divisions under its belt, constitutes one-third of the state’s 3.5-crore population.

Soon after its by-poll victory, the BJP began to up the ante in the run-up to the GHMC polls, forging its Hindutva agenda with a vow to rename Hyderabad as Bagyanagar, a term derived from fables about Sultan Muhammad Quli of the Qutb Shahi dynasty. A local fable talks about Bagmati and the love she shared with Muhammed Quli. The BJP’s promise is an attempt to drive a religious wedge in Hyderabad, which Muslims claim was founded by Muhammod Quli.

Any electoral setbacks in the GHMC elections may lead to KCR losing his grip over the TRS and trigger reverse defections from the party, party sources fear.