The RJD leader wanted to ensure he was the obvious choice for Bihar's chief ministership. 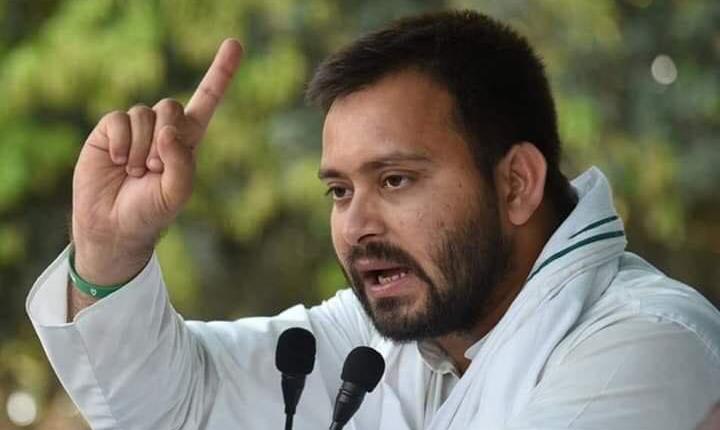 Not many were expecting that the Rashtriya Janata Dal-led alliance would be defeated so decisively in the 2019 Lok Sabha elections in Bihar, winning only one seat (Congress in Kishanganj) out of 40. To make matters worse, the margin of defeat in most seats was substantial.

The party was a reluctant alliance maker. This reluctance provided credence to the allegations that the party did not want to reach out to non-Yadavs. The alienation of non-Yadavs, particularly the ati pichhrhas, from the RJD goes so far that they dreaded the thought of the party making a comeback in the state.

Lured by majoritarianism and jingoism, the bond between these marginalised groups and the National Democratic Alliance has been strengthened. So much so that the SC/ST reserved seats in Bihar and Jharkhand witnessed 3%-5% greater voter turnout in these elections. The results clearly show that the Bharatiya Janata Party’s appeal among weaker sections increased heavily.

The RJD’s new allies (the Rashtriya Lok Samata Party, Vikassheel Insan Party and Hindustani Awam Morcha) did not have a cadre base, nor did they have the ability to transfer votes to their allies. Their inadequacies had become largely clear while they were with the BJP, until recently.

Nitish Kumar and R.C.P. Singh had been assiduously working to co-opt block- and district-level RJD+ workers belonging to non-Yadav castes, particularly the Koeris (Kushwahas). Nitish’s efforts had intensified ever since Upendra Kushwaha made it clear that he was leaving the NDA.

Mukesh Sahni’s Vikassheel Insan Party (VIP) had an added disadvantage – in recent years, there have been many instances of communal clashes between the Mallahs and Muslims.

The RJD’s core base is Muslims, whereas a large number of Mallahs have been associated with the Hindu fundamentalist Bajrang Dal, particularly in north Bihar, for a while now. The communal tensions and violence in Muzaffarpur (January 2015), Vaishali’s Lalganj (November 2015), Saran (August 2016) and so on were witness to Mallah aggression. In rural north Bihar, the rise of Mallah power in recent years has been seen with consternation, not only by the “upper” castes but also by other groups.

In this scenario, Mallahs having their own political party did not go down well with other groups.

While BJP’s Mallah candidate, Ajay Nishad, has been elected once again from Muzaffarpur, other dominant castes felt reassured that he will be reined in by the party’s top leadership. The BJP has been the preferred choice for the “upper” castes for years.

The Madhubani Lok Sabha seat being given to the VIP only strengthened Muslims’ misgivings about the Mallahs – close to 22% of the constituency’s population is Muslim. 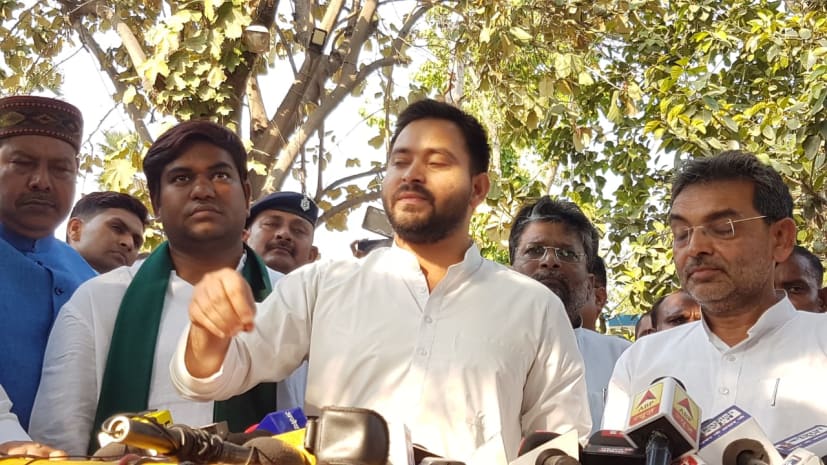 In the 2014 Lok Sabha elections, RJD’s Abdul Bari Siddiqui lost Madhubani by a small margin of 16,000 votes. This time, the VIP first allocated the seat to a known Rashtriya Swayamsevak Sangh pracharak. After much hue and cry, he was replaced with another Bania candidate. Rumours were rife that the candidate selection was based on large amounts of money being handed over to the party chief.

VIP chief Mukesh Sahni took on a Muslim candidate from the Lok Janashakti Party (part of the NDA), Mahbub Qaisar, in Khagaria. Neither Tejashwi nor Sahni tried to allay other groups’ misgivings about the Mallah community.

The alliance with HAM chief Jitan Manjhi suffered from similar problems. This became evident on polling day in Gaya, from where Manjhi was contesting. Local correspondents told me then that Manjhi was witnessing acute booth mismanagement – a large number of booths in Gaya had no HAM workers. Neither did they have workers from allies like the RJD. Nitish Kumar, on the other hand, had nominated Vijay Manjhi, from the same Musahar community, and cultivated a meticulous booth strategy.

The top alliance leaders were not seen addressing public meetings or rallies together. For the people, this portrayed a lack of cohesion.

Tejashwi’s own campaign also lacked energy. More than anything else, his campaign stood out for the number of breaks he took. He was, and is, ill prepared. He does not have a direct connection with young party workers at the district and block level across Bihar – not even with the Yadav cadres.

The RJD leader even played the victim card – about his father’s imprisonment – very late (from the third phase of the campaign). His speeches lacked force and passion; he repeated himself far too often. His attack against Nitish Kumar as ‘paltu chacha (uncle turncoat)’, including multiple daily tweets, boomeranged. He also failed to explain the resemblance between the fodder scam (in which Lalu has been imprisoned) and the Srijan scam (in which Nitish and Sushil Modi have been named).

Another thing Tejashwi failed to understand was this was a vote for New Delhi; regional issues were not carrying as much weight. He should have focused on the issues raised by Rahul Gandhi, such as NYAY, Modi’s failures on the economy, unemployment, farm distress, the Rafale deal, fleeing capitalists, hate killings, etc.

RJD’s opposition to the 10% quota for poor “upper” castes and minorities also seems to have harmed it. The OBCs were not really opposed to this policy – pressed under the sustained propaganda of the “upper” castes, the well-off sections of dominant OBCs possibly harbour some sense of guilt. The Samajwadi Party, therefore, did not speak against it.

The Lalu family feuds, frequently in the public domain, were also debilitating. The emergence of three young contenders from within the family – Misa, Tejashwi and Tej Pratap – is being seen as succession war, with no space for anyone else to make their way to the top. 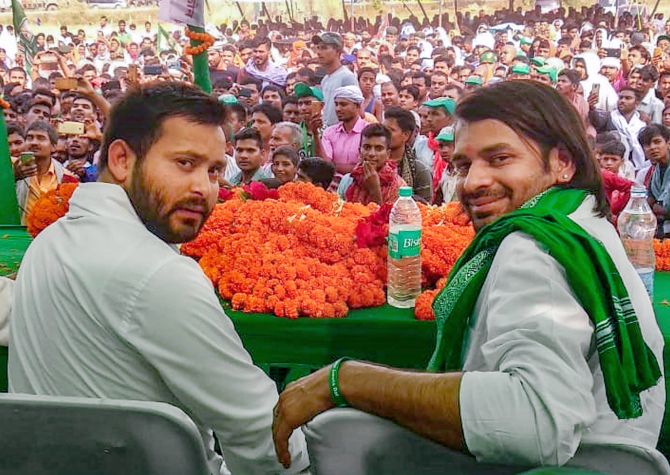 RJD leaders Tejashwi Yadav and Tej Pratap during an election campaign rally for the Lok Sabha polls, at Patna, May 12, 2019. Credit: PTI

The RJD’s stubborn refusal to align with the Communist Party of India in Begusarai and the alienation of Pappu Yadav also had to cost it dearly – and the result has come as no surprise. The CPI has its support base in Madhubani, Motihari and Gaya, an alliance could have paid off for the RJD.

Ticket-distribution was flawed on many seats. In Sheohar and Motihari (Purbi Champaran), a political novice from the Magadh region was suddenly parachuted in. This created lot of anger among gatbandhan supporters.

This was the RJD’s first election without Lalu on the scene, and so a test of Tejashwi’s leadership. What was revealed was that Tejashwi was more interested in enhancing his own political stature by pulling down senior leaders, breaking alliances and displaying arrogance – in addition to making silly mistakes in candidate selection.

Factors like alienating Pappu Yadav, defying the alliance and fielding an RJD leader to cut into the votes of Ranjita (Congress candidate from Supaul and Pappu’s wife) led to a section of Yadavs deserting the RJD candidate, Sarfaraz, in the adjacent seat of Araria. These personality clashes and infighting inevitably resulted in defeat.

Many Bihar-watchers surmise that Tejashwi’s over-ambitious and desperate move towards making himself an obvious choice for chief ministership in 2020 meant that he cut his alliance partners and attempted to decimate potential rivals such as Pappu and Kanhaiya Kumar. Contrary to what he wanted, these decisions have only dulled his chances in the upcoming assembly elections.

Also read: Battling an Identity Crisis, Nitish Kumar is Set to Emerge in a New Avatar

Has Tejashwi learnt any lessons from this debacle? If yes, how will he mend his ways? Only time will tell. He needs to realise that now it will be very difficult for him to bargain for more seats with his allies. Sections of Yadav youth have been lured by Hindutva. The RJD has been out of power for a while now. The lack of largesse and state patronage could further erode the RJD’s support base in the days to come.

Sections of Muslim youth are already angry with Tejashwi on many counts, including the candidate selection in Madhubani, Sheohar and Motihari. Some are being courted by the Janata Dal (United) and LJP; these Muslims think their association with NDA allies may have a moderating influence on the BJP.

The new generation of aspirational groups, particularly the youth, don’t pin much hope on the RJD, which is identified more with misgovernance and undoing developmental gains. Nitish may have been failing miserably on law and order, but the propaganda machinery still presents him as ‘Sushasan Babu’.

The Bihar assembly elections are still 17 months away – too long to predict how the tide will or won’t turn. Yet, as of now, the days ahead appear difficult for Tejashwi.

Mohammad Sajjad teaches History at Aligarh Muslim University and is the author of Muslim Politics in Bihar: Changing Contours. He tweets @sajjadhist