Tathagata Roy and the Normalisation of Hate Speech by Public Functionaries

By spreading incendiary and communal propaganda, the Meghalaya governor is expressing the ruling party's majoritarian agenda. 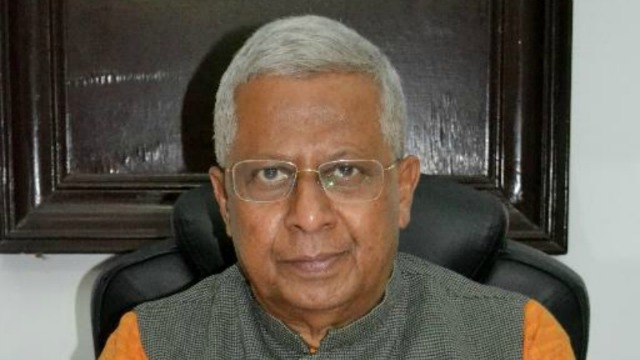 On September 29, Tathagata Roy, retweeted a tweet with the headline, “Muslims rape 16-year-old Hindu girl, who begs them ‘Please leave me for your Allah’s sake’.” The original tweet was by Robert Spencer, the founder of the extremist Islamophobic propaganda blog, Jihad Watch, which based the news on a report by another propaganda website – one inspired by Hindutva – the Hindu Post.

Roy’s Twitter timeline is replete with tweets of this nature: incendiary, hate-filled communal propaganda. Why are we talking about Roy? Tathagata Roy, shockingly, happens to be the governor of the state of Meghalaya. In the Republic of India’s order of precedence, the governor of a state is a high constitutional functionary, and is ranked number four, after the president, vice-president, and prime minister.

If cow-related lynchings in the past five years have been the violent and explicitly visible outcome of the dangerous majoritarian agenda pursued by the ruling party, the normalisation of hate speech by important functionaries of the state like ministers and MPs has been its “non-violent” expression. Governor Roy has taken this normalisation of hate, aided by our apathy, to a level unimaginable before.

There is no shock or outrage expressed at the routine inflammable pronouncements by Roy. There are no calls to remove him from the governorship. And of course, you cannot expect the ruling party – which fielded a terror-accused, who praised Nathuram Godse, as an election candidate – to censure Roy.

Tathagata Roy is a very worrying example of the distance the republic has travelled in the past five years, in terms of targeting a minority – the Citizenship (Amendment) Bill which violates the constitutional stricture by making religion a criterion for citizenship, is only the latest indicator of the path that the republic is hurtling downwards.

Also read: People, Not the State, the Greatest Hurdle to Free Speech in India

Sample some of the statements made by Tathagata Roy as the governor of Meghalaya, and Tripura before that. He had advocated for the boycott of Kashmir and everything Kashmiri (even before Article 370 was scrapped). He approved of violence, like when the statue of Lenin was illegally demolished in Tripura, or when he quoted Shyama Prasad Mukherjee advocating a civil war as a solution to the Hindu-Muslim problem.

In the aftermath of mob violence in Malda, Roy reminded followers of the “pogrom” against Hindus in East Pakistan during Partition during which they were “mercilessly slaughtered” and saw the Malda violence as “the last warning” [to Hindus]. The murder, rape, and forcible conversion of Hindus by “bloodthirsty bands of Muslim goons” before Independence is a recurring theme in his tweets. Furthermore, just before being appointed governor, Roy tweeted, in response to a comment that Hindus have been cowardly, that “One exception was Gujarat 2002.”

His twitter feed is further full of material that would normally be a part of only the crude discourse of Hindutva extremists and propagandists: fake and unverified news, gory pictures of dead bodies of Hindus allegedly killed by Muslims (like the latest killing of the RSS worker in Murshidabad about which there are already question marks about the communal nature and political affiliation of the man), denigration of the entire Muslim community, videos of sexual harassment perpetrated by mullahs (including a disturbing video of a man in a skull cap molesting a minor girl which, shockingly, does not even bother to protect the identity of the child), “love jihad” and use of misogynist language for Sonia Gandhi.

One has to only compare the words of Roy with what the Constitution makers envisaged the position to become. Alladi Krishnaswami Ayyar hoped that the governor would be a “sagacious counsellor,” Sardar Patel, “a man of substance,” K. M. Munshi, a person “who is free from the passions and jealousies of local party politics” and Ambedkar, not a “representative of a party” but as “the representative of the people as a whole of the state.”

These hopes have not been only dashed but turned into a frightening proposition under the tenure of Roy. This is despite the fact that the governor’s post has been the most abused in the political sphere, by becoming a mere political tool in the hands of the Centre.

Hate speech is not explicitly named in Indian laws even when there are legal provisions like IPC section 153 A which penalises “promotion of enmity between different groups on grounds of religion,” etc., or 505(1) and (2) which penalise “publication or circulation of any statement, rumour or report causing public mischief and enmity, hatred or ill-will”. Although the courts have erred on the side of the freedom of speech (and rightly so) in the absence of defined hate speech laws – for the fear that curbs would be misused by the state – the situation is so grave in India that the Supreme Court asked the Law Commission to examine the issue.

Roy’s defence is curious for the Law Commission had already submitted its report in March 2017. According to it, “even speech that does not incite violence has the potential of marginalising a certain section of the society or individual.” The report makes specific recommendations to amend the laws by naming hate speech and making it a criminally punishable offence with a maximum period of sentence of two years.

Also Read: Accountability, Not Curbs on Free Speech, is the Answer to Harmful Content Online

But the real question is, do we need legal criminalisation of hate speech to make high constitutional functionaries realise that India is a democratic and secular republic? Alladi Krishnaswami Ayyar wanted the governor to “throw oil over troubled waters”; instead, we have Roy’s everyday communal demagoguery which leaves the spirit and letter of the Constitution in tatters.

We have looked away so far. Can we afford to continue to do so?