Through his journey as one of Assam's most visible politicians, that Gogoi was committed to the people was felt by all. 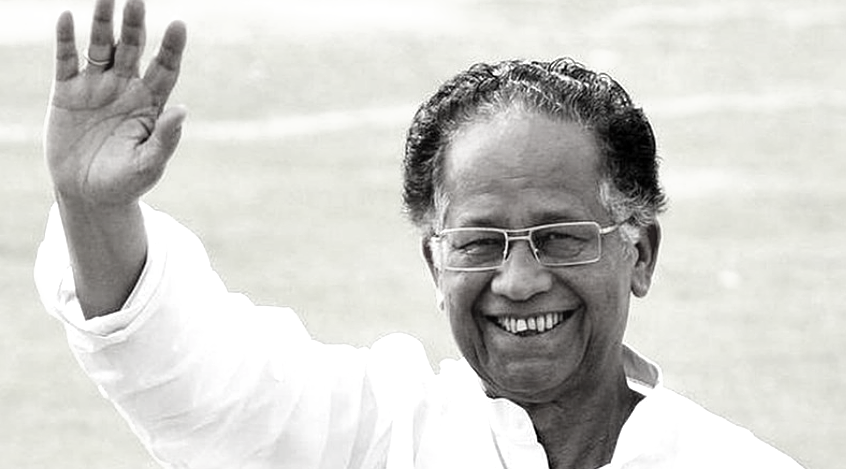 On August 26, he was admitted to the government-run hospital after testing COVID-19 positive and could never recover from the complications that arose from it.

Though his party, the Indian National Congress, was out of power since May 2016, Gogoi, till he was affected by the deadly virus, didn’t step back from active public life even for a day. In spite of his advanced age (at 84, he was only three years younger than me), he kept engaging with day-to-day politics. He had slowed down lately due to his advanced age but was never found wanting when it came to the sharpness of mind or just to air a hearty laugh on live television when an uncomfortable question would be thrown at him by a young reporter.

He would invariably be the first to respond to a ruling party leader’s controversial comment or a state government’s policy in the local media. Even though he was a former chief minister, his press conferences at his Guwahati office till the end were packed with reporters – no less than that of a sitting chief minister. It only highlighted his prominence in Assam’s contemporary politics. 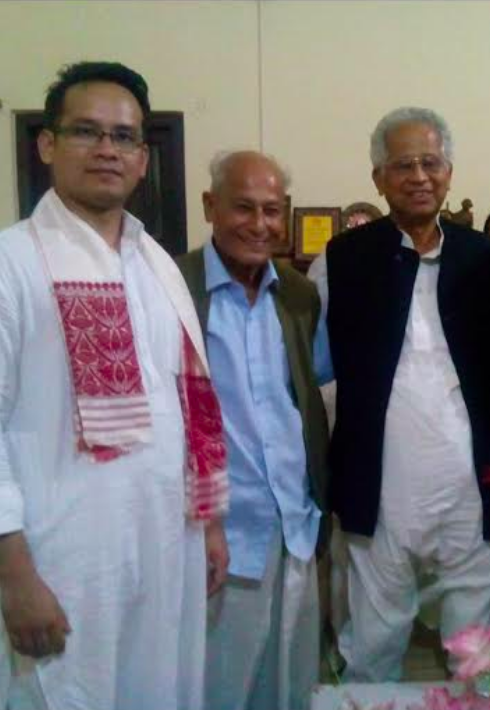 Tarun Gogoi and son Gaurav Gogoi at the author’s house during a visit in 2018. Photo: arranged by author.

My association with Gogoi dangoriya (a manner of addressing a gentleman in Assamese) treads back to 1968.

We were all members of the Assam chapter of a volunteer organisation, Bharat Sevak Samaj. The then national head of the Samaj was Guljarilal Nanda (former prime minister) and the Assam chapter was led by social worker Ghaneswar Das. Though it had members from Congress, the organisation was not directly affiliated to the party. Youth from different ideologies had joined the Samaj. The objective of the Samaj was to inspire youth to offer shram daan. It essentially meant signing up for voluntary physical labour as social service.

After the 1962 Chinese debacle, youth in Assam were ever more eager to do something worthwhile for their state. The patriotic fervour in us was then invigorated further by the Chinese aggression. We in Assam nearly fell into the Chinese hands then and that consciousness was not lost in any one of us.

It was through this Samaj that certain roads in Assam were made motorable, all thanks to the local youths’ volunteering. For instance, we had widened the road that linked the then remote Mokrong area to Golghat town, so also that of Borhola to Jorhat town in upper Assam.

Congress being the only dominant party in Assam those days, I too was drawn to it in 1960, like several youths of our times.

Having grown up watching tall Congress leaders of Assam, including the first chief minister Gopinath Bordoloi, we were easily attracted to the party that brought us Independence from British colonialism. Gogoi, however, was not a Congress member when I met him first in Borhola during the road widening work. While we as a group of youth had gone there from nearby Golaghat, he came from Jorhat with some others, including Bijoy Krishna Handique (former union minister and Member of Parliament from Jorhat). My first memory of him was that of a tall young man holding a kuur (spade) and a daa (a traditional knife) on the Borhola road. Each volunteer had to bring those tools from home.

After the Borhola work was completed, we next met at the Samaj’s All India Jamboree in Delhi. Goodwill developed between us.

Though Gogoi’s family was from Titabor in Jorhat, he spent time in Golaghat in his childhood as his father Kamaleshwar Gogoi was a doctor then at a tea estate in Khumtai area. As a child, he used to accompany his father to the theatre at the Amateur Theatre Hall of Golaghat town, which had played a pioneering role in stage performances in that region. This is the reason Gogoi remained a life member of that Hall.

As a junior lawyer, he began practice under the well-known Jorhat-based advocate Nabin Burhagohain. Burhagohain was a Khadi-donning Congressman. Gogoi joined the party at Burhagohain’s prodding. Prior to our meeting in 1968, he had also shown interest in taking part in a students’ convention in Jorhat, most likely in 1966 (if my memory serves me right) as the youth then had felt that they needed to organise themselves in a state-wide single platform to raise the state’s issues with New Delhi and also among Assamese people. That convention can be called the prelude to the formation of the All Assam Students Union (AASU).

Sometime in 1971, I received a message from the then All India Congress Committee (AICC) member Fakruddin Ali Ahmed from Delhi that Gogoi could be a potential candidate of the party from the Jorhat Lok Sabha constituency for that year’s elections. Ahmed, then an MP from the Barpeta constituency who later went on to be the first President of India from the Northeast, was close to Indira Gandhi and had a huge say in the selection of party candidates for any election in Assam. 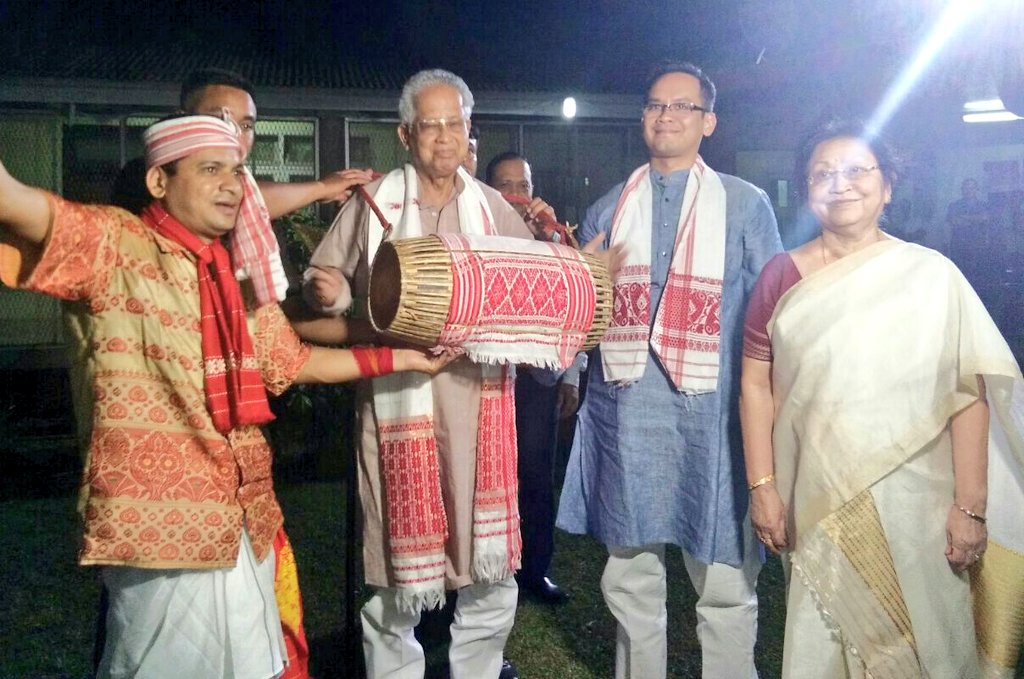 Gogoi at his house during Rongali Bihu. Photo: Twitter/@tarun_gogoi

Already, news was abuzz that the noted Assamese tea planter Hemen Barooah would contest the polls from the Jorhat constituency as an independent candidate. Barooah was from a well-entrenched, moneyed family with a strong lineage in Jorhat. Their family then also used to bring out a newspaper from their ancestral place, Melamati, in Jorhat.

Gogoi too was from Jorhat. Also young, like Barooah. Congress was looking for a young candidate then to field from Jorhat. Though a Congress member, Doshi Barik, was also angling for a party ticket from Jorhat, Fakruddin was keen on Gogoi. Those days, the national party was eager to promote youth particularly from the Ahom and Kayastha communities in Assam.

I reached Burhagohain’s chambers in Jorhat with Fakruddin’s message. He was to be packed off to New Delhi by air. Gogoi flatly refused to contest the elections. It was Burhagohain who then pushed him to fly to Delhi to meet Fakruddin sahab. I had to at once organise the airfare for him, rushed to my cousins’ at Jorhat town and borrowed Rs 440 to buy a ticket in a Dakota plane from Jorhat’s Rowriah air base to Delhi.

Gogoi returned with the party ticket and continued to represent Jorhat in Parliament from 1971 till the early 1980s. He represented the Kaliabor parliamentary constituency between 1991 and 1996, which his son, Gaurav Gogoi, now represents for the second consecutive term. In the 1983 parliamentary polls, responding to the AASU’s call to boycott the elections that year till the state’s foreigner issue was resolved by New Delhi, Gogoi didn’t contest the elections. That helped him win public support. 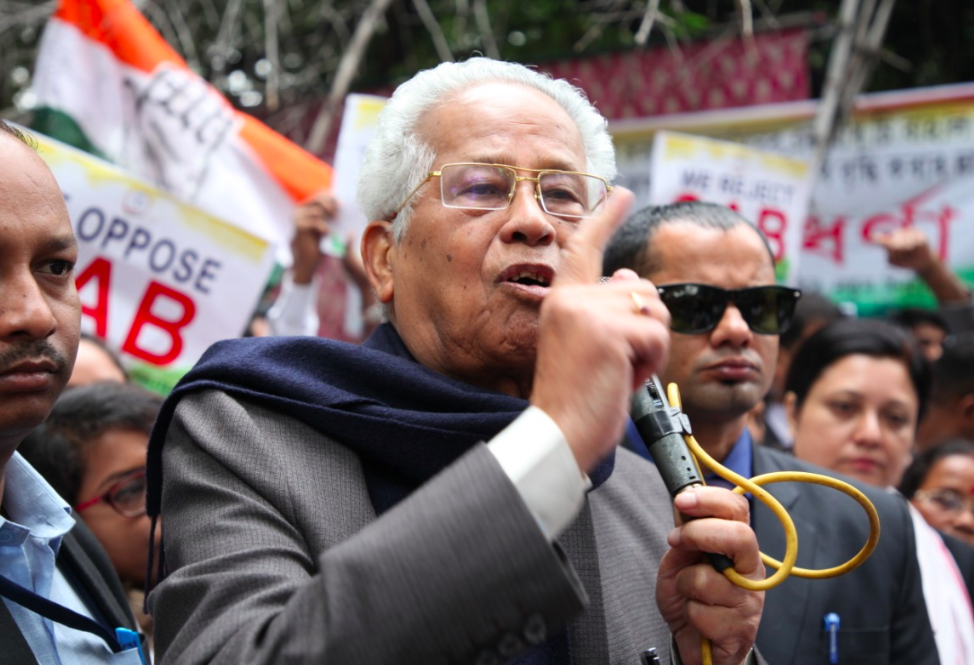 Though he was from the Ahom community, Gogoi remained outside of the pale of Assam politics because it was Hiteswar Saikia, also from the community, who got closer to then Prime Minister Indira Gandhi who was then looking at someone to suppress the students’ movement. Like Syeda Anwara Taimur was made the state chief minister during the volatile Assam anti-foreigners’ movement primarily because she was close to Mrs. Gandhi, Saikia too was picked for the top post for his closeness to the party high command. Gogoi was accommodated as a minister of state at the Narasimha Rao government in 1991 when Saikia was made the chief minister for the second time.

It was after Saikia’s demise in April 1996 that Gogoi was brought in by the party to state politics. Gogoi had no assembly constituency then to contest the 1996 polls. Saikia passed away just a few days ahead of those state polls. The present Lok Sabha MP (from Nagaon) Pradyut Bordoloi stepped down from the Margherita seat which enabled him to win the by-polls in 1996 and enter the state assembly. Gogoi successfully contested from his home constituency, Titabor, from 2001 onwards, till 2016.

Gogoi’s term as the state chief minister – from May 2001 to May 2016 – will remain prominent in the state’s political history. It was this period that gave the people of the state a much-needed respite from the dark days of the second Prafulla Kumar Mahanta (Asom Gana Parishad) regime and offered a sense of stability and hope for better days to the common man. With the so-called secret killings, allegedly being carried out at the state’s behest then, people were scared to come out of homes post sundown during the Mahanta regime.

Also read: Interview: ‘Rise of Regional Formations in Assam a Blessing in Disguise for AGP’

It was not only that the law and order situation improved across the state in Gogoi’s time but he also helped Guwahati develop infrastructure to become a proper capital city of not just the state but also as a gateway to the Northeast.

Above all, Gogoi’s demise must be noted as the curtain that fell on the politicians of a different era that existed in Assam. The kind who never feared facing criticism, be it from the public or the media; never took shortcuts to win an election, and never vindictive towards a political opponent.

Apurba Kumar Barooah is a social worker and founder of the Assamese weekly Saptahik Dhansiri, published from Assam’s Golaghat town. He quit active politics in the early 1980s.