Elections in Tamil Nadu: A Wild Race, With No Rules

Two exit polls predict the return of the Dravida Munnetra Kazhagam (DMK)-led alliance, while one forecasts the exact opposite. 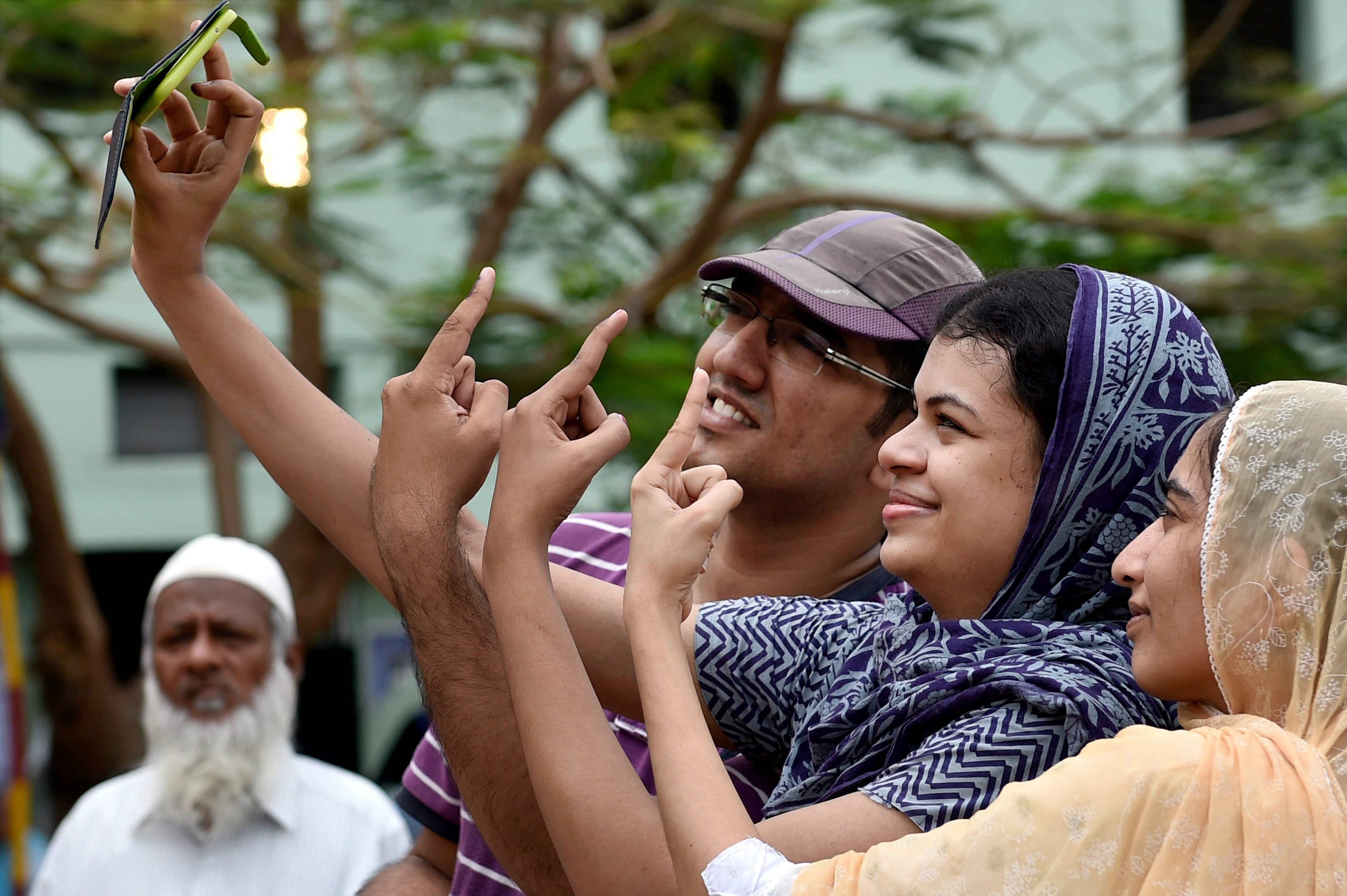 Voters take selfies after casting their ballots for the Tamil Nadu Assembly polls, in Chennai on Monday. Credit: PTI

Chennai: At the end of election day in Tamil Nadu, exit polls seemed as confused as the voters exiting from polling booths in the state. As voters began to cast their votes at 7am, morale seemed low. The weekend preceding May 16, 2016 had seen enormous cash seizures and the last minute postponement of polling in two constituencies. This was combined with widespread disenchantment with the two big Dravidian parties, and a stand-off of sorts in over-the-top manifestoes across parties.

All these downers, along with several complaints of names missing in electoral rolls, led to an unusually low voter turnout of only 73.76%. This is a fall from the 78% that voted in the last assembly election in 2011.

Two exit polls (News Nation TV and India Today-Axis My India) predict the return of the Dravida Munnetra Kazhagam (DMK)-led alliance, while one by TimesNow-CVoter forecasts the exact opposite. Rocking the boat first is the People’s Welfare Front, an ideologically mixed alliance of Vijaykanth’s DMDK, Vaiko’s MDMK, left parties, and Thol Thirumavalavan’s VCK. Eating more votes away are the Anbumani Ramadoss-led Patali Makkal Katchi (PMK), and the Bharatiya Janata Party (BJP), which have contested alone in all 232 constituencies that went to polls today.

As a reference, here are the actual tallies from the 2011 assembly election, which brought Jayalalithaa to power: the AIADMK combine won 150 and the DMK alliance a measly 32.

These seat projections are wildly different and sometimes do not square with the corresponding vote share, so it might be best to take them simply as post-game analysis. Tamil Nadu’s electorate has proven earlier exit polls wrong repeatedly. Further, there are those ‘Others’ splitting votes that could have gone to two big parties that have alternatively held power for 50 years in the state.

The 2016 election is a real head-scratcher, with group-specific issues and seat-specific caste and economic concerns. For instance, actual polling in the north has been over 80%, and Palacode segment in Dharmapuri district has seen the state’s highest turnout of 88.5% – thanks to the PMK’s caste consolidation of the dominant Vanniyar caste against Dalits in the area. Nearby constituencies like Harur and Papparapetty have also seen high turnout, but all parties in the area have fielded candidates from the same caste. Other than chief ministerial candidate Anbumani Ramadoss, who is likely to win in Pennagaram, north Tamil Nadu, traditionally a DMK stronghold, could stick to a Dravidian party or even lean towards the pro-Dalit third front.

Incumbency – the dependable decider that has ensured Tamil Nadu’s pendulum swing between DMK and AIADMK regimes since 1989 – could also be fragmented by region this time. Memory of December’s massive rain and flooding is expected to create an anti-incumbency wave against J. Jayalalithaa’s AIADMK government in severely affected areas like Chennai, Kanchipuram and Cuddalore. After all, more than 500 people died and there was enormous property damage due to poor evacuation and the slow reaction from state authorities. But as The Wire interviewed voters in the district, oddly, the issue seemed to be already fading in relevance. In Velachery, a severely flooded area in Chennai, 55-year-old Gunasekaran spoke words that showed the AIADMK’s extensive perception management post-floods, and rapid relief activity in their strongholds: “The floods were a natural event, and Jayalalithaa’s government quickly gave us relief materials and the one lakh compensation. In three days, they pumped out water.” Meanwhile, some residents in a polling booth in Saidapet, a DMK stronghold till a 2002 by-election, said they didn’t get their compensation, were stranded without power and clean water for days. Several middle class voters admitted being disgusted with the Jayalalithaa photographs affixed on flood relief material; these upper caste votes could transfer to the BJP.

An indication of any anti-incumbency fuelled by anger would have caused voters to turn up in large numbers. But flood-affected Chennai polled the worst in the state on May 16, just over 60%. Kanchipuram, Tiruvallur and Cuddalore recorded 72%, 68% and 74% respectively.

Another factor this election are the two groups that all parties have been breathlessly wooing: women and youth. At 2.91 crores, women exceed male voters this election, and 19% of the total electorate is under 35 years of age. Visually impaired women coming out of a polling booth after casting their votes for in Tamil Nadu. Credit: PTI

At the time of writing this report, the Election Commission has not released details about the percentage of women who voted. But members of the DMK and AIADMK both admit that large numbers of women voting could mean two entirely opposing things. As largely pro-AIADMK voters, more women could mean good news for Jayalalithaa. But as 31-year-old Salma, a cook in Chennai said, “Amma has hesitated on full prohibition, saying she’ll do it in phases, but it is an urgent demand from women.” Because Karunanidhi has promised an alcohol ban as his first signature if voted as chief minister this time, Salma voted DMK today. Many disgruntled women are likely to have voted the same way. Parties might have made the mistake of seeing women as a bloc, with even concerns; instead, the influence of ungendered issues of caste and employment makes this group doubly hard to read.

As for youth between 18 to 35 years of age, 90 lakh are unemployed, 13.5% of them postgraduates. Jobs have been scarce, and largely casual, unorganised and highly temporary. Just like women, this group desires change, but could go in the myriad directions they see today. Many seemed to be scanning the candidate lists at the very last minute in queues at polling booths. 25-year-old Vijay wanted to vote for change and non-corrupt governance and chose the third front. Accountant Prabhat in Triplicane was impressed with the year-long DMK campaign spearheaded by MK Stalin, who’s projecting a youthful, approachable image and promising a professional politics. Amazon-employee Vaishnavi in Ashok Nagar was mulling over the AIADMK because the candidate was well educated. All parties, and especially the AIADMK, have tried to address central economic concerns, especially of price rise and unemployment, through more welfare schemes in their manifestoes, like cheaper state-run eateries, waived loans, free cell phones and subsidised bikes. But while government welfare has  helped allay hunger and poverty in the past, there might finally be freebie fatigue today. “We know now that all the free stuff is at the cost of industry and agricultural development,” said 30-year-old Dandapani, a BCom graduate who drives an autorickshaw in Chennai as he looks for more permanent employment. “We need income, to pay for kids’ schools, to buy food, to even repair my auto once a year. And there has been no income generating activity in the past five years.”

Thrown in this flaming mix is the hot cash for votes. The Election Commission has seized more than Rs. 100 crores during the election, excluding a mysterious Rs. 570 crores two days before poll day, and now under investigation. As Kanaga, a young woman blowing on her index finger to dry the indelible voter ink said, “This is not a game of chess, where there are rules.” She’s right. The Tamil Nadu election is a wild race in 2016, and it can only be exciting when we get to the finishing line on May 19.

Note: This article earlier stated that the highest voter turnout was recorded in Pennagaram constituency, Dharmapuri. It has been updated to Palacode segment, Dharmapuri, according to an EC notice.