What Does the Assembly Election Hold in Store for Tamil Nadu?

While the two major Dravidian parties remain the leading forces, the state will see a multi-pronged contest – at least on paper.

Chennai: In Tamil Nadu, any election is a carnival. But this time around, an ordinary voter might just miss two celebratory elements in this carnival – the electrifying wit of M. Karunanidhi and the magnetic presence of J. Jayalalithaa. In the absence of these two tall leaders – one of whom drove the state’s politics for over five decades and the other for at least three decades– elections in Tamil Nadu might have lost some of their charm. But it is perhaps for the same reason that this April 6 election could also be one of the most important in Tamil Nadu. The outcome of this election will perhaps decide the future course of the state.

“It is significant in that it will let us know what awaits Tamil Nadu in future,” says R. Mani, a senior journalist based in the state.

The election has five fronts in the fray, but the contest could ultimately between the ruling AIADMK-led front (which includes the BJP, PMK, Tamil Maanila Congress and other smaller parties) and the DMK-led front (which includes the Congress, Left parties, MDMK, VCK and other parties). Besides, a front led by Makkal Needhi Maiyam (MNM) founded by actor Kamal Haasan, another led by Sasikala’s nephew T.T.V. Dinakaran (Amma Makkal Munetra Kazhagam) and the Tamil nationalist party Naam Thamizhar are also in the race. There are also smaller players like Puthiya Thamizhagam’s Krishnasamy, who left the AIADMK alliance after his demands were not met, and former IAS officer Sahayam is contesting in alliance with smaller parties.

MNM has allied with ten parties, including the India Jananayaka Katchi (IJK – Indian Democratic Party) which contested one seat in the Lok Sabha elections as part of the DMK front and won. Besides, actor Sarathkumar’s Samathuva Makkal Katchi (SMK – Party for Equality of People) is also contesting with the MNM. Ironically, the SMK was allotted 40 seats but had to return three due to ‘lack of candidates’.

The AMMK led by Dinakaran has in its alliance actor Vijayakanth’s Desiya Murpokku Dravidar Kazhagam (DMDK), which was part of the AIADMK alliance but could not come to an agreement on seat sharing. Asaduddin Owasisi’s AIMIM is also part of this front. The Social Democratic Party of India (SDPI) is also part of the alliance.

The Naam Thamizhar Katchi is contesting all 234 constituencies on its own and will largely pin its hopes on its leader Seeman, apart from its young leaders. The party has also fielded women in 50% of the constituencies.

Journalist Mani says that the smaller fronts – especially parties like MNM – are contesting because they believe a vacuum exists in Tamil Nadu’s politics. “It is unusual for a state like Tamil Nadu to have so many fronts in the fray, but I do not see this phenomenon lasting beyond this election. It is a multipronged contest only on paper,” says Mani.

The election and what it means for the BJP

But this election, observers say, could well decide the fate of the BJP in the state. The party has been struggling to gain a foothold in Tamil Nadu because it is seen as an “outsider”. In this election, the party is set to contest 20 seats and will hope to make some inroads into the state’s political map.

Acclaimed Tamil writer Devi Bharathi, who lives in Nathakadaiyur village of Tiruppur district, says this election will decide if the people of Tamil Nadu accept the BJP or not. “That will be the most important question. The BJP is doing everything in its capacity to establish its roots in Tamil Nadu, but I am not sure if it will work,” he said.

A crucial factor is the BJP-run Central government’s failure or unwillingness to control the prices of petrol, diesel and LPG, he says. “It is not just those living in cities that are affected by hikes in petrol prices or LPG gas cylinders. I see women and men suffering because of this hike in my own village,” Bharati told The Wire.

Mani agrees that it will be difficult for the BJP to establish itself. “Even the vision document that the party had released recently is an assault on the sensibilities of Tamils. The BJP is clearly using polarisation to steady its growth in the state, even if they know that at the moment it won’t bear any fruit,” Mani said. 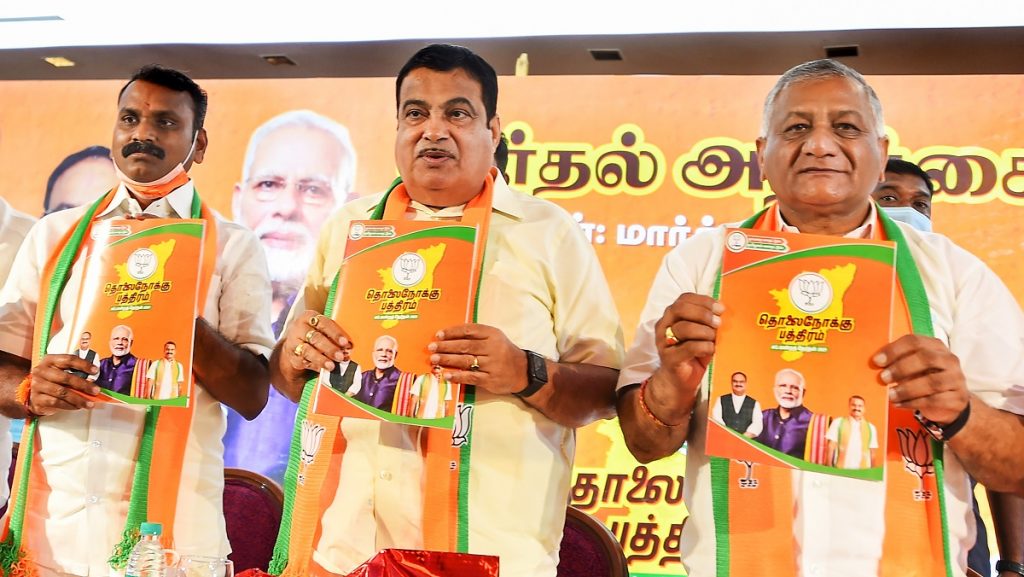 Promises like providing houses to migrant workers, Mani says, show that the BJP wants to grow on its own terms instead of addressing the aspirations of local people. “They campaign in Hindi in a state like Tamil Nadu. The BJP clearly intends to offend an ordinary voter. It is apparent that the party wants to gain a foothold in the state on its terms.”

Ironically, while the DMK front has been seeking votes by listing the failures of the present government – which has been in power for ten years, the AIADMK led front has also been harping on ‘mistakes’ committed by the DMK during their regime. “The AIADMK, especially after Jayalalithaa’s death, has delivered at least on some issues, but I think with the BJP by their side, this will not be of help much,” says Devi Bharathi.

Also Read: In Tamil Nadu, It Isn’t Just the BJP Which Struggles With the Core Values of Tamil Identity

A streak of polarisation

Observers also see a clear attempt to polarise both on communal and caste lines. Celebrated Tamil writer and poet Sukirtharani points to a campaign by a ruling party office-bearer in the Manapparai constituency of Tiruchi district, urging the electorate to not vote for a Muslim candidate.

“He said the constituency is populated by Gounders [a dominant community] and the DMK front should have fielded a Hindu candidate. This is reflective of the BJP’s attempts at Hindu consolidation in the state, which is essentially anti-constitutional,” Sukirtharani says.

The election is also witnessing polarisation on the basis of caste. While the Vanniyar dominated PMK settled for 23 seats in the AIADMK alliance, the party managed to get 10.5% reservation for the community just before the elections were announced. The reservation, PMK hopes, will help consolidate its position as the party of Vanniyars and sustain its caste-based vote bank.

Also, the Bill in Lok Sabha to amend the constitution in order to facilitate the grouping of seven Scheduled Caste communities in some districts of Tamil Nadu as Devendrakula Vellalars has helped the BJP earn the support of a section of those communities.

This grouping has been a long pending demand of the Puthiya Thamizhagam, which was part of the BJP alliance in 2016 and also in 2019. But the party left the alliance for this election due to problems with seat-sharing. K. Krishnasamy, leader of Puthiya Thamizhagam, is apparently not happy with the Bill. “We have been fighting for three decades and our demand is to not just group the communities together, but to remove them from the Scheduled Caste list. The Bill is only about a change in name, it won’t be of much help to us,” Krishnasamy told the media recently.

But C. Lakshmanan, an associate professor with the Madras Institute of Development Studies and a keen follower of Tamil Nadu’s politics, says that the attempts to polarise on caste lines have also had a countereffect.

Mani sees the BJP emerging as a major player in the future, especially if the AIADMK is relegated to a few number of seats and the DMK comes to power. “That is what the BJP wants too,” he said. If the AIADMK loses badly, there could be a churning within the party, he speculated.

For the ruling party, the election is a test of Edappadi Palanisamy’s leadership. Selected to the top position by sheer chance, Palanisamy has managed to pull it off by keeping the government intact and completing a full term. But an electoral victory alone can consolidate him as the undisputed leader of the party.

If the party does not fare well in the elections, observers say Jayalalithaa’s friend and confidante V.K. Sasikala who recently ‘quit‘ politics, might use the defeat of the AIADMK to facilitate her own comeback to the party.

“But this election is more a test for Tamil Nadu itself, whether it will retain its credential as a secular democracy,” Lakshmanan says.