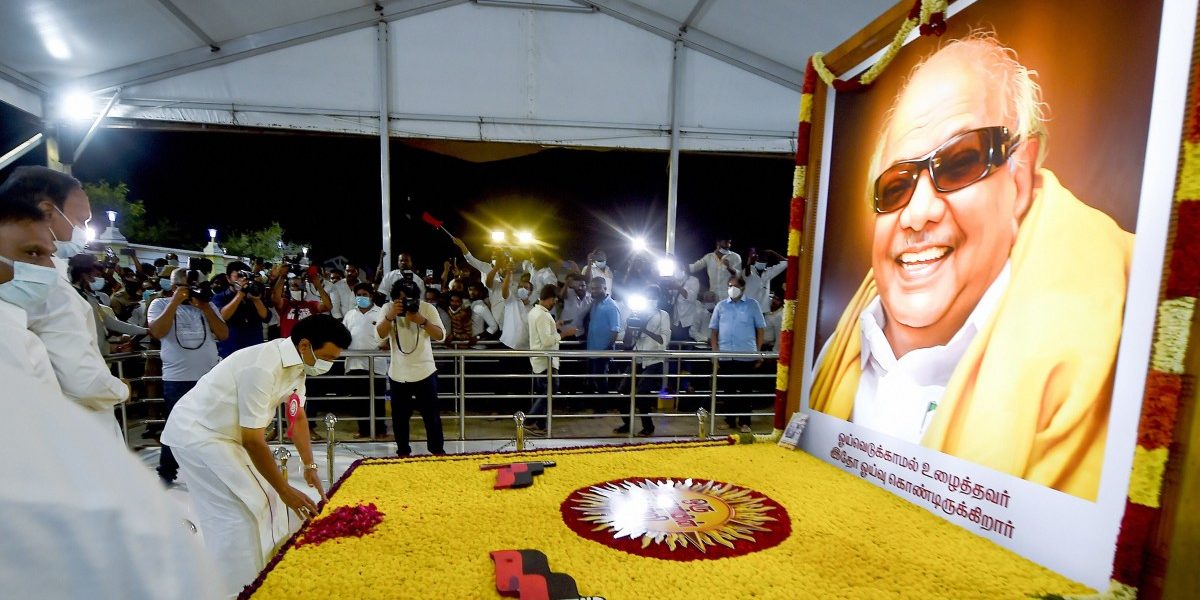 Chennai: The assembly elections in Tamil Nadu have thrown up very few surprises. The election – first to the assembly since the deaths of leaders M. Karunanidhi and J. Jayalalithaa – was expected to serve as a pointer to the future of the state. In its outcome, it is now clear that the state will stick to its course of bi-polar politics revolving around the DMK and the AIADMK.

While the opinion and exit polls predicted a near sweep for the DMK front, putting the figure between 160 and 195 in the 234-member House, the DMK front ended up securing 159 seats. The DMK alone with 133 seats will have a comfortable majority in the assembly. The AIADMK front has won 75 seats.

With AIADMK alone winning 66 seats, many theories about its future were busted, albeit temporarily. Since the death of Jayalalithaa in December 2016, the AIADMK was entangled in a leadership battle. The long-drawn-out battle for leadership between former chief minister Edappadi Palaniswami, former deputy chief minister O. Paneerselvam and Jayalalithaa’s confidante V.K. Sasikala which sometimes played out in the public too was expected to find its logical end after the election. Sources say Sasikala – who had earlier declared that she was stepping aside from politics – had hoped to bring the party back into her fold in a post-electoral scenario where the AIADMK had faced a humiliating defeat. Even before the elections, sources say that Paneerselvam was willing to arrive at a compromise with Sasikala to secure his own future in the party. “Edappadi Palaniswami performed better than Jayalalithaa in her worst election year. In 2006, the AIADMK under Jayalalithaa secured 61 seats, and after ten years in power, Palaniswami had been able to bag 66 seats,” says a Chennai-based political observer.

For now, this small victory might help Palaniswami consolidate his position as the leader of the party. But neither Paneerselvam nor Sasikala is likely to let go without putting up a fight. Sasikala might have temporarily lost the moral high ground to claim leadership after the poor performance of her nephew T.T.V. Dhinakaran’s party Amma Makkal Munnetra Kazhagam. The party polled a mere 2.47% votes while the AIADMK at 33.29% votes has managed to keep its vote bank almost intact.

Paneerselvam is reportedly eyeing the position of opposition leader in the state assembly. A section of office-bearers in the AIADMK have demanded that he be elected as the opposition leader. But Palaniswami supporters in the party also say that he is in no mood to relent. “Palaniswami was fighting a lone battle in this election. He singlehandedly toured the state, while most of the ministers remained confined to their own constituencies. He displayed his calibre as a leader – and we think his position as the AIADMK chief is almost undisputed now,” says a party leader and a supporter of the Palaniswami camp.

Another theory pertaining to the performance of the AIADMK was about the clout of the BJP in the state. A section of leaders and intellectuals had opined that a poor performance by the AIADMK in the elections will eventually lead to a scenario where the AIADMK as the principal opposition would be replaced by the BJP. The election results, however, have established that the state firmly remains ‘”entrenched in its bi-polar politics”, says A.S. Panneerselvan, senior journalist and the author of Karunanidhi: A Life.

While the BJP cadres on social media and elsewhere claim to have gained acceptance in Tamil Nadu by winning four seats and making inroads, analysts point out that this is not the first time that the BJP is actually “opening its account” as its supporters claim. The BJP had its first MLA in Tamil Nadu from the Padmanabhapuram constituency in 1996. In 2001, the party as part of the DMK-led alliance had won four seats. Since then, the party has not been able to secure a seat in the state assembly. The party had also not been facing the state elections in alliance with any Dravidian major since 2001. “It takes at least three elections to assess if a party has made any inroads,” says Panneerselvan.

He points out that no party that did not belong to either the DMK-led or AIADMK-led fronts will be entering the assembly this time. “The case was the same in 2016 too. The Left is entering the assembly because they are in alliance with the DMK and the BJP, by virtue of their alliance with the AIADMK. On their own, they wouldn’t be winning a seat.”

Also read: Lessons for the BJP: One Nation, One Culture Will Not Work in an India Proud of its Diversity

By securing close to 7% votes and emerging as the third largest party in the state, the Tamil nationalist party Naam Thamizhar has been making waves at least on social media. But Panneerselvan says there was about 10-17% of the vote bank in the state which was neither DMK’s nor AIADMK’s, and had remained unpredictable in its shifts. “At one point, the DMDK took away those votes and at another point it was the Tamil Maanila Congress (TMC) or the MDMK. Basically, this time, the upper caste sections that did not want to be in favour of the BJP voted for Kamal Haasan’s Makkal Neethi Maiyam (MNM). In subaltern sections, it went to the Naam Thamizhar.”

The Desiya Murpokku Dravidar Kazhagam (DMDK) launched by actor Vijayakanth in 2005 was expected to be a viable alternative for the Dravidian parties and had secured 8.4% votes in the first election it faced in 2006. In 2021, its vote percentage (the party had contested in alliance with AMMK), was reduced to a mere 0.43%. “You should remember that neither of the parties that belonged to a ‘third front’ today had performed as well as the DMDK did immediately after its launch,” says Panneerselvan.

Kamal Haasan’s MNM too drew a blank in the polls, with the actor himself narrowly losing the Coimbatore South seat to the BJP candidate Vanathi Srinivasan. The party secured 2.45% of the votes.

With the question of ‘vacuum’ now almost settled, the DMK – which put up a formidable, well-rounded fight to capture power – will now have to focus on the set of challenges it will face in office. For the AIADMK, the challenge will be to effectively resolve the leadership question.