'This change of political stance at my end is spurring those in authority to be in political vendetta mode against me,' wrote the influential leader who is rumoured to be joining BJP soon. 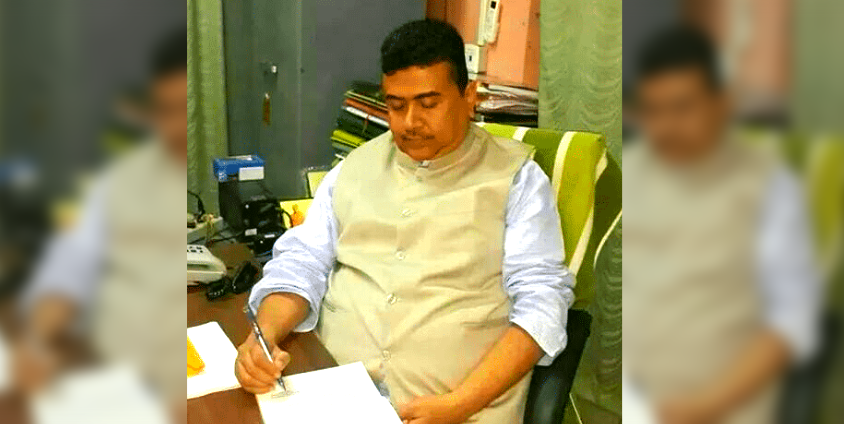 Kolkata: Months after rumours of his unhappiness in the Trinamool Congress began gaining ground, rebel MLA Suvendu Adhikari has finally resigned from the Mamata Banerjee-led party, at once expressing fear that he may be implicated in criminal cases because of this.

This move appears to bear a degree of finality in this tepid standoff and adds fuel to rumours of Adhikari joining the Bharatiya Janata Party on the December 19 weekend, when former party chief Amit Shah visits Bengal.

The face of the Nandigram movement that added to the political heft of Banerjee and catapulted her to power in West Bengal in 2011, Adhikari is a crucial leader who is believed to have the capacity to sway the results of nearly 40 in the 294-seat Bengal assembly. Bengal will go to polls in April or May of 2021.

Hours after resigning as MLA of the state assembly on Wednesday, December 16, Adhikari also sent in his resignation letter to TMC chief Banerjee, with whom his equation has grown steadily sour. 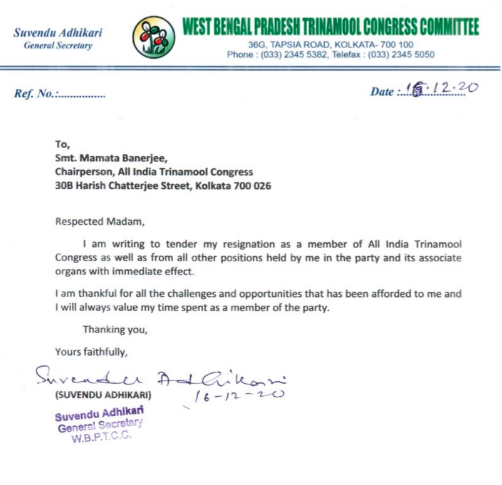 On the same day, Adhikari wrote to Bengal governor Jagdeep Dhankar – whose public spats with the Bengal chief minister have become commonplace now – expressing fear that he might be framed by the state police in retaliation. “I…gather that this change of political stance at my end is spurring those in authority to be in political vendetta mode against me. Unleashing police repression by implication in criminal cases on political considerations is certainly an alarming indicator of governance away from the rule of law,” Adhikari wrote.

Dhankar has tweeted that he called upon the chief minister with Adhikari’s concerns but received no response. 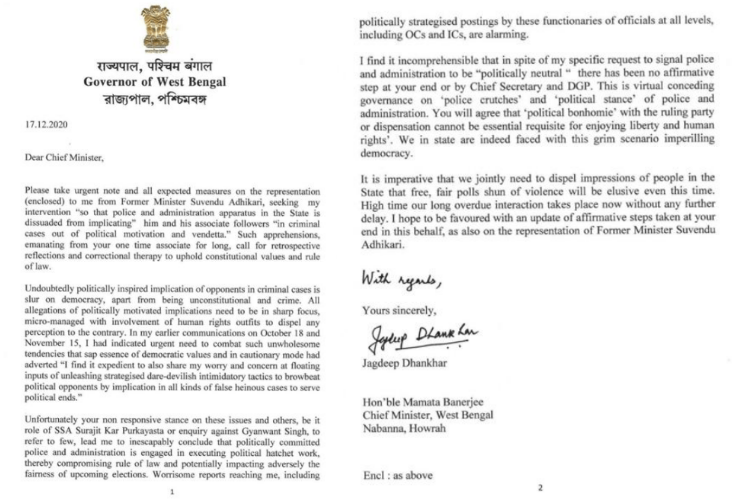 The TMC MLA of Nandigram constituency in Purba Medinipur district had resigned from the state cabinet last month.

Tiwari, also mayor of Asansol, recently slammed the state government for allegedly depriving the industrial town of central funds for political reasons. On Thursday, Tiwari tendered his resignation from the post of Chairman of the Board of Administrators, Asansol Municipal Corporation.

That Adhikari could take a sizeable chunk of the TMC leadership with him to the BJP is a possibility that has been frequently cited by local media.

While senior TMC MP Kalyan Banerjee had described Adhikari’s resignation as “relief”, BJP national general secretary and Bengal minder Kailash Vijayvargiya claimed that this was the “beginning of the end” of the ruling party which would now collapse like a house of cards.

The former two-time MP was reportedly unhappy with organisational changes in the TMC and the growing clout of election strategist Prashant Kishor and Abhishek Banerjee, the chief minister’s nephew and the Lok Sabha MP from Diamond Harbour, in the decision making the process of the party.

After efforts of rapprochement failed, he criticised the TMC leadership on a range of issues but did not name anyone.

On Wednesday, the chief minister while addressing a rally in Coochbehar district, termed the deserters of the party as “opportunists and cowards” and accused the BJP of trying to coerce TMC leaders to join the saffron party.

BJP national vice-president Mukul Roy, a TMC deserter himself, hailed Adhikari’s decision and said the saffron party would welcome him with open arms.

State Congress president Adhir Chowdhury termed the growing resentment in the ruling TMC as “poetic justice” and claimed that the party is being paid back in its own coin.

Adhikari’s father Sisir Adhikari and brother Dibyendu are sitting TMC MPs from Tamluk and Kanthi Lok Sabha constituencies respectively. There is no indication yet that they will jump ship.