'Mamata's Bengal Win Has Had a National Impact': An Interview With Sushmita Dev

Dev is on her way to Tripura, where she says she will help the Trinamool Congress build an organisational base. 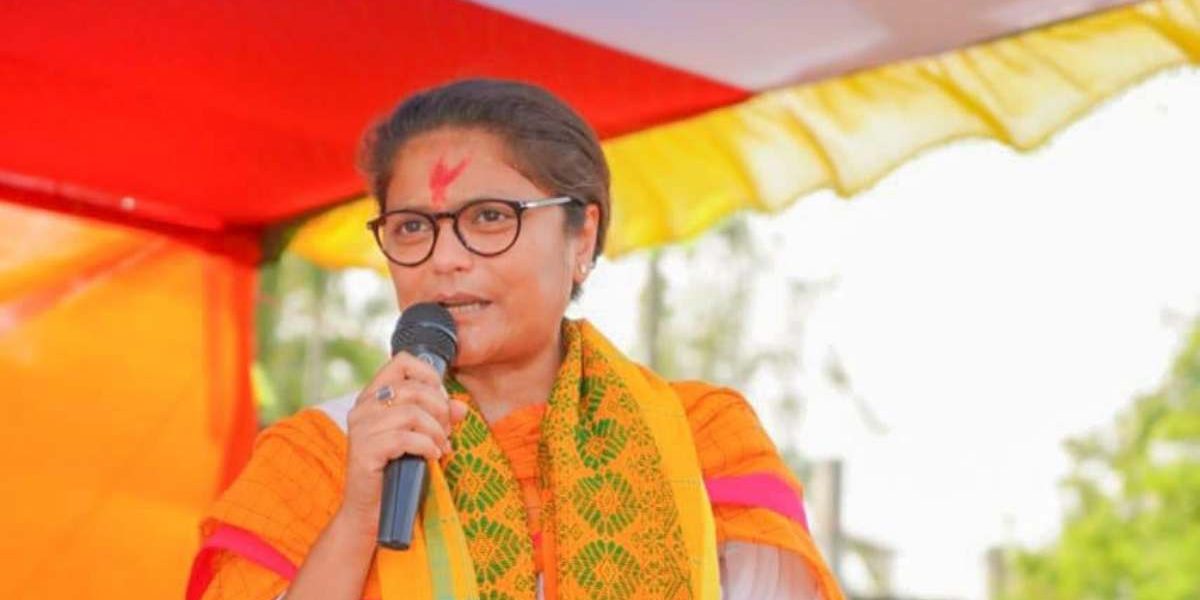 Her resignation letter to Congress president Sonia Gandhi a day before joining TMC raised many an eyebrow, with senior members like Kapil Sibal, who have been seeking a reform within the party, once again reminding the national leadership that concrete steps must be taken to revamp the party and lead the opposition from the front against the Narendra Modi regime.

Daughter of Santosh Mohan Dev, former Union minister and Congress heavyweight from Assam’s Barak Valley, Sushmita had lost the last parliamentary polls from Silchar to Rajdeep Roy of the BJP. Dev’s entry into the TMC has kicked up speculation in the media that she might be projected by TMC supremo Mamata Banerjee in a much bigger role in Tripura and help expand the party’s footprints in the Bengali-dominated state after its big win in West Bengal against the BJP.

On September 1, The Wire caught up with Sushmita Dev while she was on a train from her home town Silchar in Assam to the BJP-ruled Tripura – for the first time after joining the TMC.

“I am going to Tripura today to spend a few days there; the aim is to help build an organisation of the state TMC unit. At the moment I don’t hold any organisational position in the party; I am visiting Tripura only as a primary member of the party,” Dev told The Wire.

At a time when Congress leaders are trooping to the BJP, particularly in Assam, what made the TMC attractive to you?

Well, it is very simple. There is no question of going to the BJP as I am ideologically diametrically opposed to it. Additionally, my family history [referring to her father and former Union minister Santosh Mohan Dev and mother and former Assam MLA Bithika Dev’s long association with the Congress] is such that switching to the BJP is not an option for me.

I also strongly believe that a section of people across the country are increasingly getting disgruntled by the Narendra Modi regime; I believe that it will culminate in a political change in 2024. People are increasingly noticing that the NDA governments have failed to deliver what they had promised to the people.

I was attracted to the TMC and to Mamata Banerjee’s leadership because of her recent assembly election victory against the Modi Shah-led BJP in West Bengal, in spite of them using money power, misusing the Election Commission of India, the central forces, the central agencies… it has made a huge national impact. People are increasingly seeing her as the one who can successfully give the Modi-Shah regime a decisive fight.

It is clear that TMC is looking at expanding its footprint in the Northeast. We have already seen some heightened action in Tripura. You are visiting Tripura for the first time today after joining the TMC. There is also a rumour that you will be the party’s chief ministerial face in the next elections. Your father represented Tripura at the Lok Sabha.

My father contested from Tripura (in 1991) because he couldn’t contest from Assam because of a demand to the ECI then to re-verify the state’s electoral rolls. But yes, he was one of the few MPs to have represented two states in Parliament. Having come from Assam’s Bengali-dominated Barak Valley, a neighbour to Tripura, and my father’s special bond with the people of Tripura, the party is looking at me to build an organisation in the state.

It is not that TMC had never fielded candidates from Tripura before but yes, it is now accelerating its reach to voters in order to win the state in the 2023 assembly polls. It is clear to us that the mood of people in Tripura is definitely for a change. They are fed up with the BJP government. TMC won in Bengal by putting forward the Bengali pride, not Bengali chauvinism. It fought against the BJP-RSS’s aim at Hindi-fication of Bengalis and this has found resonance in both Tripura and Barak Valley of Assam.

Also read: West Bengal: As Third MLA Defects, Things Could Get Worse For the BJP

If TMC wins Tripura in 2023, it will be the first among the regional parties to rule in two states. Be it Aam Aadmi Party, Samajwadi Party, YSR Congress, DMK, Telengana Rashtra Samithi, Bahujan Samaj Party, none of these regional entities have been successful in coming out of their respective states to form a government in another state.

I am going to Tripura today to spend a few days there; the aim is to help build an organisation of the state TMC unit. At the moment I don’t hold any organisational position in the party; I am visiting Tripura only as a primary member of the party.

As to the rumours about the party projecting me as a chief ministerial face in Tripura, etc., it is too early to talk about it as the elections are in 2023. Right now, it is only media speculation. Also, in an electoral democracy, you can’t impose a face on people; people will have to accept the person.

Two major wins for the BJP in the Northeast were in Tripura and Assam. We have heard about TMC eyeing Assam too. The regional party Raijor Dal’s leader Akhil Gogoi recently said that the TMC had approached his party for an alliance.

Yes, TMC is interested in Assam and in collaborating with regional parties there; it is in its long-term interest. Mamata Banerjee, by winning Bengal against the BJP on Bengali pride, has shown a way to the Assamese too to take pride in them and reject a party that doesn’t respect their sentiments. Mamata Banerjee, however, understands that Assam is far more challenging than Tripura. Right now, the concentration is on Tripura.

In Assam, the biggest challenger to the BJP is still the Congress, though.

Congress comes with baggage in Assam and, therefore, can’t truly challenge BJP in the state. Congress owned up to the Assam Accord signed during the Rajiv Gandhi era. Former chief minister Tarun Gogoi and former Prime Minister Manmohan Singh went ahead in fulfilling the promise made by the party’s government to the people by updating the National Register of Citizens (NRC) in Assam. As a Bengali, I have to admit that the Accord helped the community as the citizenship cut-off year in the state became 1971 (in tandem with the formation of Bangladesh) while elsewhere in India it was 1951. But the updated NRC also led to so many people left out of it. Congress president Sonia Gandhi may be well meaning but what is the public stand of the Congress on what could be the solution to sorting out the possible statelessness of so many people in Assam?

Congress opposed the Citizenship Amendment Act (CAA) in keeping with its commitment to the Accord but when the Assam assembly elections came in 2021 after public protests against the CAA, the party tied up with All India United Democratic Front (AIUDF) which the majority Assamese public view as a party that protects undocumented Muslim immigrants. That step of the party was a contradiction because the Assam Pradesh Congress Committee had passed a resolution stating that AIUDF is a communal party. The result of that pre-poll tie-up was that the majority of Assamese voters sided with the BJP and, in turn, decided to support the Hindu Bengalis. Now, just before the by-elections in upper Assam, the Assamese heartland, the Congress has decided to sever its ties with AIUDF. This only means that the alliance with AIUDF had backfired.

In Assam’s Barak Valley, the population pattern and its history is such that often there is room for communal politics. BJP has succeeded in the region only by playing up these factors. How do you see TMC’s entry changing politics in Barak?

Personally, I feel both Congress and the BJP have played the politics of exclusion as far as Assam’s Barak region is concerned. They may differ in degrees but the approach is the same. So the people of the valley need an alternative and TMC is looking at giving the voters an option they are looking for.

TMC is also one of the rare regional parties to take on the BJP in Northeast. The other entities have become part of the BJP’s North East Democratic Alliance (NEDA). Your party has a lot of tough work cut out for itself in the days ahead.

The primary purpose of NEDA was to keep out Congress from power in the northeastern states. The BJP tied up with all the top regional players of those states to ensure it. The party gave its responsibility to Himanta Biswa Sarma and it also gave him a handle to show to his new party that he is capable of doing it; in helping BJP be part of various governments in the region. That way, he could also show that he was useful to the party. Sarma cleverly used his role as a convener of the NEDA to eventually put pressure on the party to make him the chief minister, his ultimate goal. The party had to cede to it. Now, he barely visits the other NE states as a NEDA convener. NEDA is essentially defunct now.

Be it through CAA or the border tensions in the Northeast, the BJP has succeeded only in opening old wounds. It has been two years now that the NRC results are hanging over those excluded from it like a sword. While the Supreme Court has made it clear that it doesn’t want re-verification in the border districts of Assam, the state coordinator still files an application seeking it. So it is very clear that while the BJP knows that it can’t be done, it still wants to use NRC as a political tool. So, while BJP is interested in only keeping the sensitive foreigners’ issue alive in Assam for political gains, the Congress, which had signed the Accord in 1985 to solve the problem, failed to do so as the issue didn’t go away. So, while Congress has the baggage of history in Assam, the BJP is also only activating old wounds without a solution. By freshening the sentiments around the state border disputes, the BJP has only succeeded in putting the region in turmoil once again.

TMC, unlike these two parties, has no baggage. It is willing to look at the issues afresh and therein lies the difference.

Aside from TMC, there is also former Congressman Pradyot Debbarman’s tribal-centric party TIPRA which is taking on the BJP in Tripura. It succeeded in wresting from the BJP the Tripura Tribal Areas Autonomous District Council in 2021. Will TMC have any tie up with TIPRA to give a joint fight to the BJP in 2023, like BJP did in 2018 with the tribal party IPFT against the Left?

It is too early to talk about any alliance in Tripura. In the course of time, the party will take a call. An alliance is not only about how many seats can a party together with another entity win in an election; it also concerns various other considerations politically.

But I have to state here that Pradyot was the first to realise that people in Tripura are in a mood for a change. Having come out of the Congress, he has succeeded in sweeping the district council elections on his own mettle.