Sushil worked as a 'softener' for Nitish against the aggressive Hindutva elements in the Modi-Shah era. With the BJP leadership removing the 'softener', Nitish has no respite now. 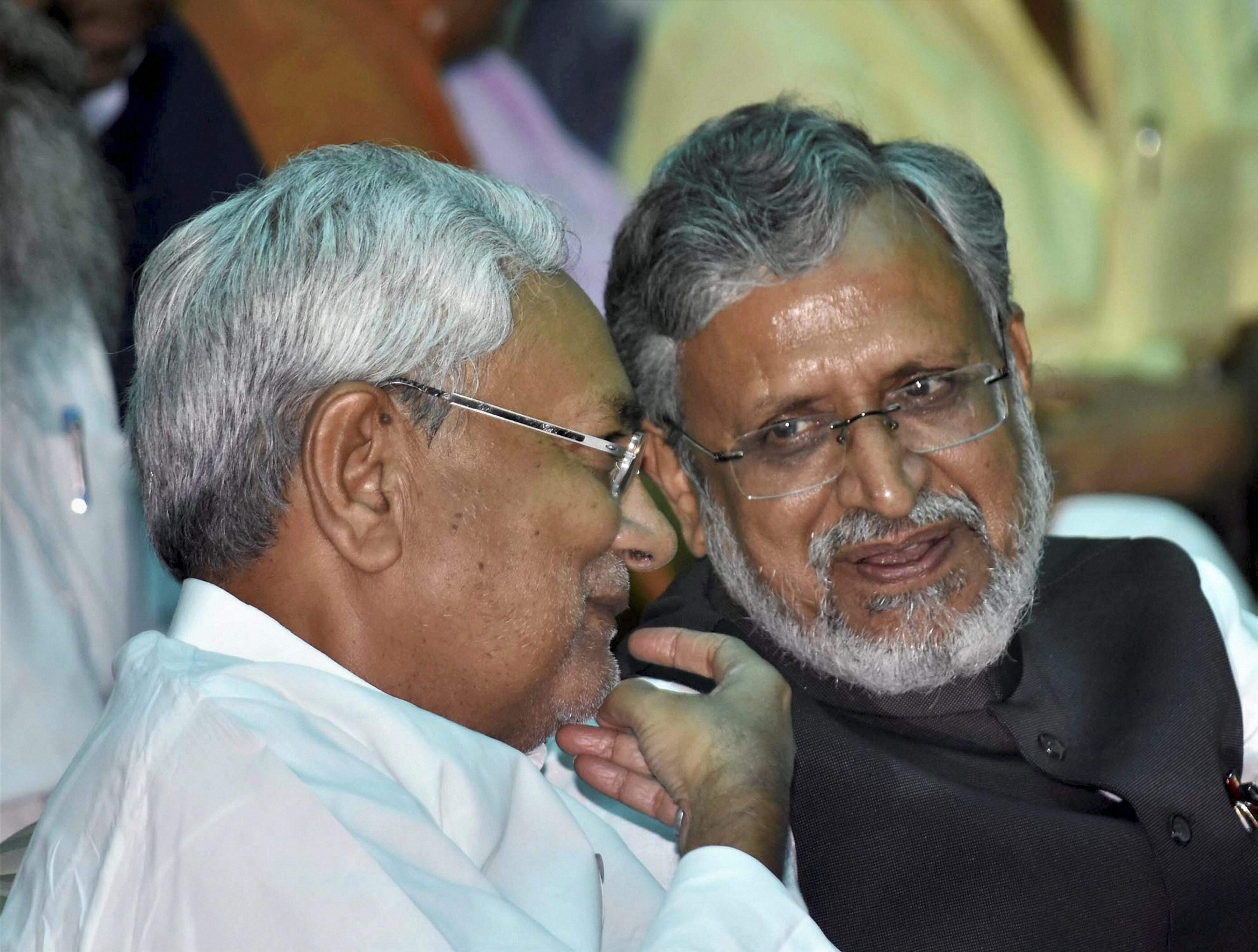 Patna: The last ten days have witnessed dramatic fluctuations in the fortune of two ‘friends’ – Nitish Kumar and Sushil Kumar Modi. The Bihar chief minister seems to be on a slippery slope while his former deputy has recovered more than what he had lost after the election results.

While Sushil got stripped of his position as the deputy chief minister – an assignment he had carried with perfection for 13 years, Nitish saved his forte as the chief minister by a whisker despite his party being reduced to 43 MLAs against the BJP’s 74.

Drama laced with a fair dose of suspense marked political activities with Narendra Modi and Amit Shah leading the new BJP order and operating from behind the scenes and doing many things which neither Sushil nor Nitish could have guessed or predicted.

In a sudden turn of events, Sushil demitted his deputy chief minister’s office to two of his lesser known pupils –Tarkishore Prasad and Renu Devi. As November drew closer, the Sheikhpura MLA, Vijay Kumar Sinha – who was hardly heard during his first term from 2015 to 2020 – became the assembly’s speaker. Now, 243 members would vie for his attention to get heard.

But the man who has made a fabulous recovery is Sushil. He was lying low till the BJP nominated him as its candidate for the Rajya Sabha on November 28 against the vacancy caused by Ram Vilas Paswan’s death. He was elected unopposed to the Rajya Sabha on Monday, becoming the only Bihar leader after Lalu Prasad Yadav and Nagmani to represent all the houses – Lok Sabha, assembly, legislative council and now Rajya Sabha. He already has a unique record of never losing an election.

Another point the political pundits are surprised at is that the Rashtriya Janata Dal (RJD)-led mahagathbandhan didn’t field its candidate against Sushil – the bitterest critic of Lalu – that paved the way for his unopposed election. 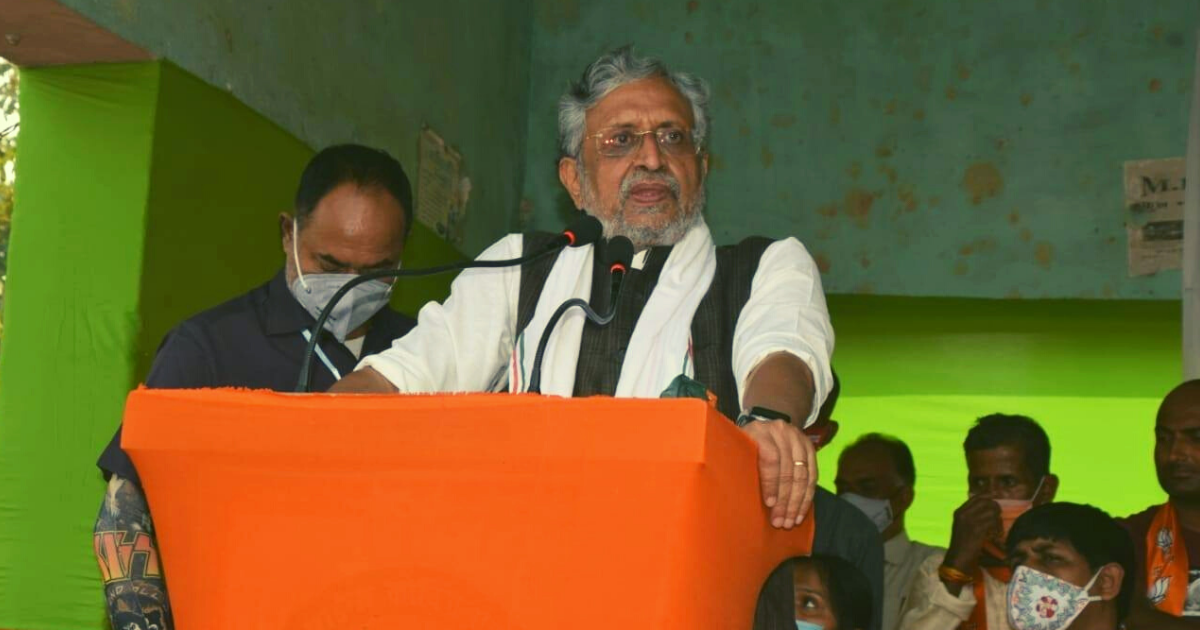 Now the grapevine has it that Sushil will find a coveted place in the Narendra Modi-led cabinet. Make no mistake – Sushil will maintain his distinct position and will perform commendably if he gets to the central cabinet. Despite being strongly rooted to the broader RSS-BJP’s philosophy, he with his Christian wife celebrates Christmas with as much gusto as he celebrates Diwali. He is the only BJP leader in Bihar who throws iftar party and wears a skull cap – symbol of Islamic culture – on the occasion and mingles with Muslim friends that he has in plenty.

On the other hand, he seldom wears saffron attire and red tikka on his forehead. Moreover, he has performed without blemish as Bihar’s finance minister for 13 years. He was the chairman of the goods and services tax (GST) committee under the then finance minister, Pranab Mukherjee in 2011 and earned Pranab’s praise for his “efficiency and knowledge” with financial matters.

Many of the new converts to the Narendra Modi-Amit Shah’s brand of the BJP reportedly tried to malign Sushil’s image saying that Sushil was “Nitish’s man”. But they couldn’t succeed.

Sushil, who made his mark as an Akhil Bharatiya Vidyarthi Parishad (ABVP) activist during the JP movement in 1970s, stayed committed to the RSS’s larger philosophy and never looked for an option away from the RSS-BJP in life. He has worked with Mohan Bhagwat, Dattatreya Hosabale and many others who are at the top of the RSS’s ladder for the visatarikaran (expansion) of the Sangh’s philosophy. The present BJP president, J.P. Nadda – who studied at Patna University in 1970s and 80s – grew under Sushil’s tutelage when the latter was all India general secretary of the ABVP. His detractors couldn’t impregnate through the layer of long connections that Sushil has in the RSS-BJP.

Also read: Nitish Kumar’s Journey From Trenchant Modi Critic to the Most Reliable Executor of ‘Moditva’

Sushil worked as a “bridge” between Nitish and the BJP during the moderate A.B. Vajpayee-L.K. Advani era. And he worked as a “softener” for Nitish against the aggressive Hindutva elements in the Modi-Shah era. With the BJP leadership removing the “softener”, Nitish has no respite now.

Earlier, the BJP acquiesced to all the “tantrums” that Nitish used to throw at them. For example, the state BJP leaders repeatedly declared Nitish as the NDA’s chief ministerial face, praised him for his administrative efficiency and did everything to please him.

Now the BJP leaders are throwing all “tantrums” at him, forcing him to accept whatever they throw, even derisively. For instance, simultaneous with Sushil’s election to the Rajya Sabha, Bihar’s BJP chief Sanjay Jaiswal wrote on his Facebook wall: “The incidents of crime have escalated manifolds between Raxaul to Motihari in north Bihar. The police are unable to apprehend the criminals, so I’ll personally meet the DGP to resolve the issue,” seemingly questioning Nitish’s efficacy with the law and order. The JD(U) spokespersons remained tight-lipped. “We have no instruction to speak on the matter,” said a visibly petrified JD(U) spokesperson.

Jaiswal had a meeting with the BJP legislators including the deputy chief ministers and other ministers, instructing them to fan out in their respective constituencies to collect donations for the construction of a “magnificent” Ram temple at Ayodhya.

Jaiswal’s action coincided with the RSS chief, Mohan Bhagwat’s two-day visit to Bihar. Bhagwat and other top RSS leaders Bhaiyyaji Joshi, Suresh Soni, Dattatreya Hosabale and Manmohan Vaidya attended the RSS’s executive committee meeting under Bhagwat’s stewardship. The RSS resolved to “expand the scope of employment and speed up economic activities in the villages of Bihar to stop migration”.

A source in the RSS explained: “The government is about to bring out large scale vacancies for school teachers, teaching volunteers, tola sevaks (village volunteers) and aanganwadi workers. The RSS would prepare the list of the youths committed to bharatiya mulya (Indian values) and rastravad (nationalism) to get appointed as school teachers, teaching volunteers, village volunteers and aanganwadi workers. The government will have a sanitised [read radicalised] workforce at the grassroots level”.

The RSS-BJP has already got its nominees as the members of the Bihar Public Service Commission (BPSC) which appoints the middle-level officers in the state bureaucracy and police.

Earlier, Nitish didn’t listen to the RSS-BJP in the matter of appointments. Now he can’t afford to ignore them. 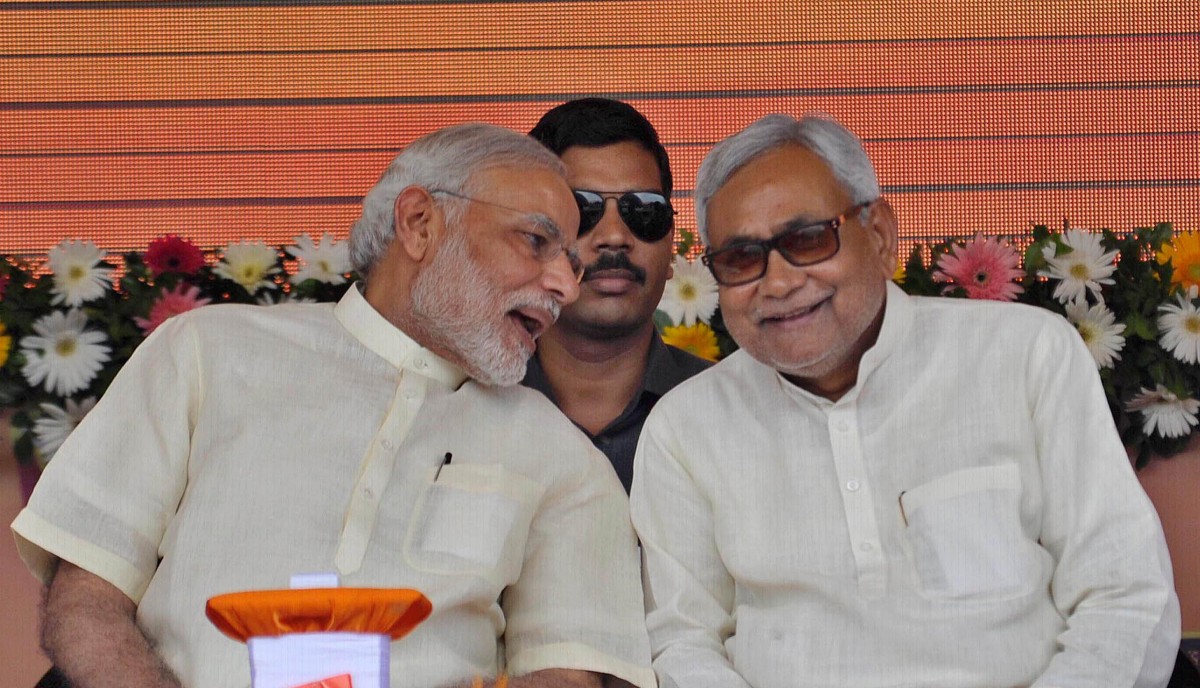 Nitish has meekly acquiesced to Narendra Modi on the farmers’ stir even as the long time NDA partners are dumping the BJP on the controversial farm laws – the Akali Dal has already left the NDA. Rajasthan’s Rashtriya Loktantrik Party (RLP) chief Hanuman Beniwal has threatened to quit NDA if the government didn’t concede the farmers’ demands. All the opposition mahagathbandhan partners and farmers’ unions in Bihar are up in arms against the new farm laws. But the JD(U) is, perhaps, the only non-BJP party in India which is singing in tune with the PM on the issue.

“I had annulled the APMC Act in Bihar in 2006. The farmers would keep on getting the minimum support price (MSP) despite the new laws – the way they are getting in Bihar”. The fact remains that the farmers are forced to sell their paddy at the rate of Rs 900-1,200 a quintal against the MSP of Rs 1,868 a quintal in the state.

Also read: Nitish Kumar May Be Quiet Now, but His Compromise With BJP Rings Loud

Looking for an escape route

Nitish is desperately looking for an escape route from the shackles of the BJP tightening around him. He has established contacts with his estranged friend, Upendra Kushwaha – Koiri leader. The grapevine has it that he might induct Upendra in his cabinet to rebuild the luv-kush (Kurmi-Koiri) combination of the JD(U), which has been reduced to 43 seats. But it amounts to resorting to the old formula that has lost its relevance.

Kushwaha’s Rashtriya Lok Samata Party (RLSP) didn’t win a single seat in the last elections. Moreover, there is hardly any trust left between Nitish and Upendra with Nitish expelling Kushwaha twice from the JD(U) and Upendra spewing venom at Nitish. Upendra, by all accounts, is a spent force and if Nitish and Kushwaha join hands that will be more a marriage of convenience for immediate gains rather than achieving a long term goal.

Nalin Verma is author of Gopalganj to Raisina – My Political Journey, Lalu Prasad Yadav’s autobiography. He has also authored The Greatest Folk Tales of Bihar.