Several polling booths in the Srinagar parliamentary constituency had to be closed due to protests, and eight protestors died in security force firing.

Voters in a queue to cast their votes at a polling booth in Srinagar on Sunday. Credit: PTI/S. Irfan

Voters in a queue to cast their votes at a polling booth in Srinagar on Sunday. Credit: PTI/S. Irfan

Srinagar: At most of the polling stations of more than 1,500 in the Srinagar parliamentary constituency of Jammu and Kashmir,  government forces deployed outnumbered the voters. With negligible response from the people, the first phase of  by-elections in Kashmir  has been marred by a low voting percentage, massive protests, internet gag and civilian killings. Protests continue in various areas of the three districts of the constituency – Srinagar, Budgam and Ganderal.

The People’s Democratic Party’s Nazir Ahmad Khan and National Conference’s Farooq Abdullah are in the  fray to secure the parliament seat, which has nearly 1.2 million voters. At 81, Abdullah is fighting a rigorous battle against the PDP, with his campaign based on opposing the PDP-BJP alliance and wooing voters by invoking Islam. Both the PDP and the NC, however, kept their campaigns low-profile, focusing mainly on party workers.

This election has shown the impact of last summer’s uprising, in which at least 80 civilians were killed and many injured, on Kashmir. In protest-hit areas (200 officially), civilians received both pellet and bullet injuries. Eight persons were shot dead by government forces and above 100 received injuries in clashes between protestors and security forces during the ten hours of polling. Dozens are being treated for pellet injuries at the SMHS hospital in Srinagar.

The ruling PDP’s senior party leader and in-charge of the Srinagar constituency, Imran Ansari, told reporters that he won’t deny the voting percentage is low but said there are obvious reasons why this is happening. “We have had a turbulent year last year in which scores of young boys died on the streets. This is not a win-win situation for anyone. No party can say that I won or whatever,” he said.

While the morning hours saw some votes being cast,  participation has been extremely low compared to any previous elections. The chief electoral officer said that the total percentage of voting has been only 7.1.%, which is lowest ever in the last three decades in Kashmir.

At one polling booth in Budgam district, only 100 votes were polled till noon. A polling official at the booth said that there was no flow of voters this time. “This polling booth used to have long queues in previous elections but this time there is no one. There is tension in the areas so people are staying away from the polls,” he said.

In Nasrullah Pora of Budgam, at least 14 people were injured, including seven employees working the polling booth and police personnel. As per an eyewitness, protestors attacked the polling station in which several people got injured. “The protestors even took away the Electronic Voting Machines from the booth,” he said, after escaping safely from the spot. Around five-dozen polling stations were shut due to similar protests.

An on-duty polling staffer also confessed that this has been the “most failed election” in the state, in which people are only expressing their anger. Without giving his name, a young magistrate who was in charge of polling stations in central Budgam, said that as usual only eight security personnel were on duty but at places it had been increased. “Among the ten polling booths under me, there were protests at two so some more forces were brought. Things are fine but polling is very brisk in this election,” he said. 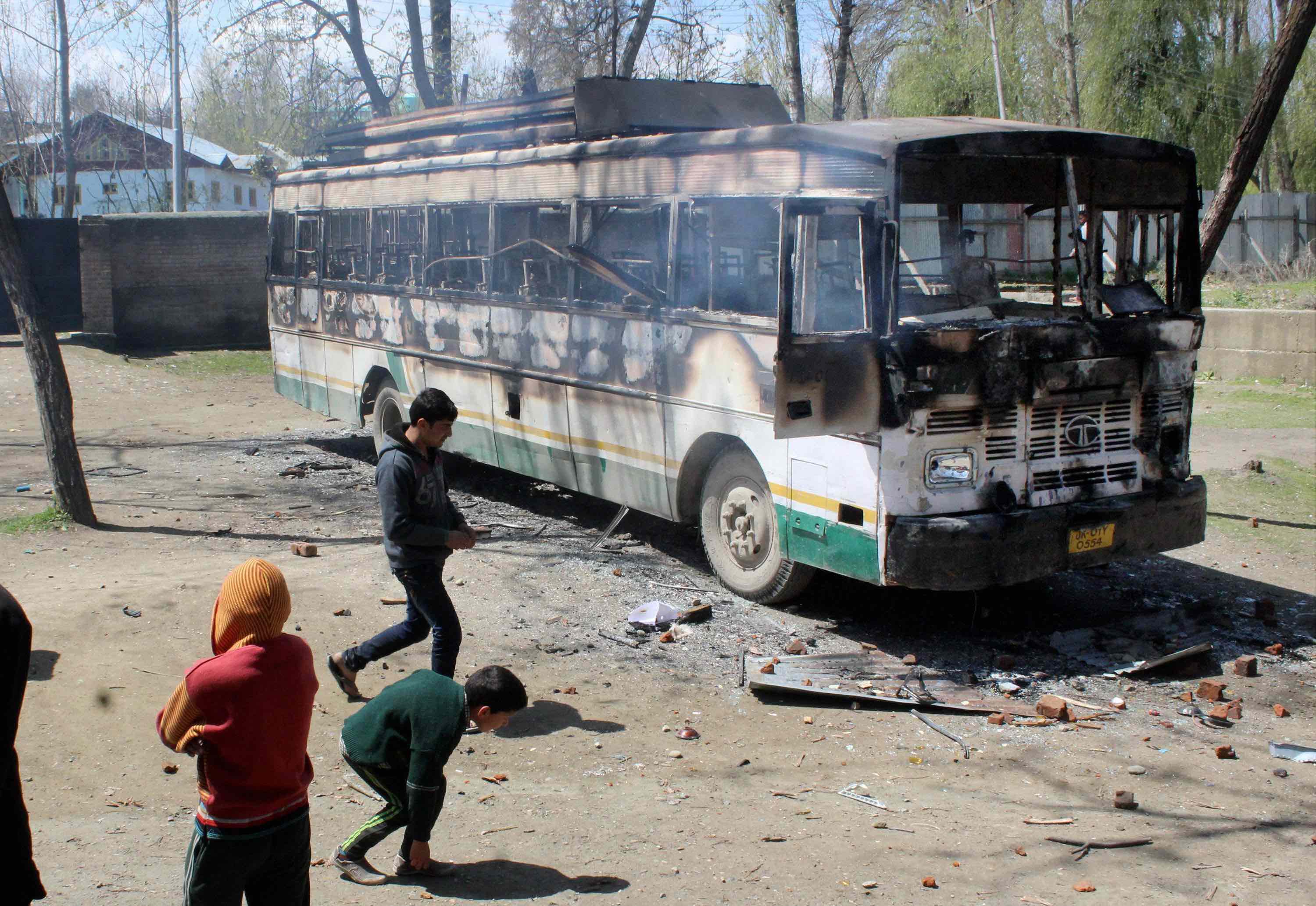 Protesters throwing stones at a burning polling staff bus after they attacked a polling station at Kanihama in Srinagar on Sunday. Credit: PTI

Protestors also took control of several polling stations and forced officials to wind up. In Srinagar, two polling stations were taken over by angry youth in the afternoon, while clashes continued in various parts of the district. An eyewitness, over the phone, said that protestors attacked the polling station, which compelled the staff and forces to leave.

Commenting on the official crackdown and violence, former chief minister Omar Abdullah said that he doesn’t remember this happening in previous elections and it “just goes to show how bad things have gotten in the last couple of years.”

While taking a walk in the city centre, Lal Chowk, a vendor, Abdul Hameed slammed the elections, saying that there is no use for them  in Kashmir. “What will Farooq Abdullah do now?” asked Hameed. “Today he invokes Islam and says stone throwers are not fighting for tourism. But this is the same person who will go to parliament and tell India to kill Kashmiris.”

After casting his vote, Farooq Abdullah told reporters that the election should have been peaceful. “That’s what elections are,” he said. “People have to show their presence and support to whoever they want to. That is the first and foremost thing about the freedom of this nation.”

Just a few miles away from his residence in Srinagar, at one polling station, the Border Security Officials were busy preparing dinner. Out of 1,400 votes, only 150 were cast. An on-duty police official remarked that these elections were a shame for politicians. “People have been killed and now they will say elections were held. These politicians do not care about the general public, they only want their seat of power,” he added, while expressing his fear of going on election duty in South Kashmir on April 12.

Ahead of the second phase of elections in the Anantnag parliamentary constituency of South Kashmir on Wednesday, Kashmir will remain shut, as the joint pro-azadi leadership has called for a two-day shutdown against the civilian killings and also reiterated its election boycott call.

Fahad Shah is a journalist who is the founder and editor of the Kashmir Walla, a digital magazine.