Congress Fails to Shake off the Gandhis, Appoints Sonia as New Interim President

The surprise decision comes even as many names – from young Turks to experienced leaders – were floating around, the party had to rely on the Gandhi family yet again. 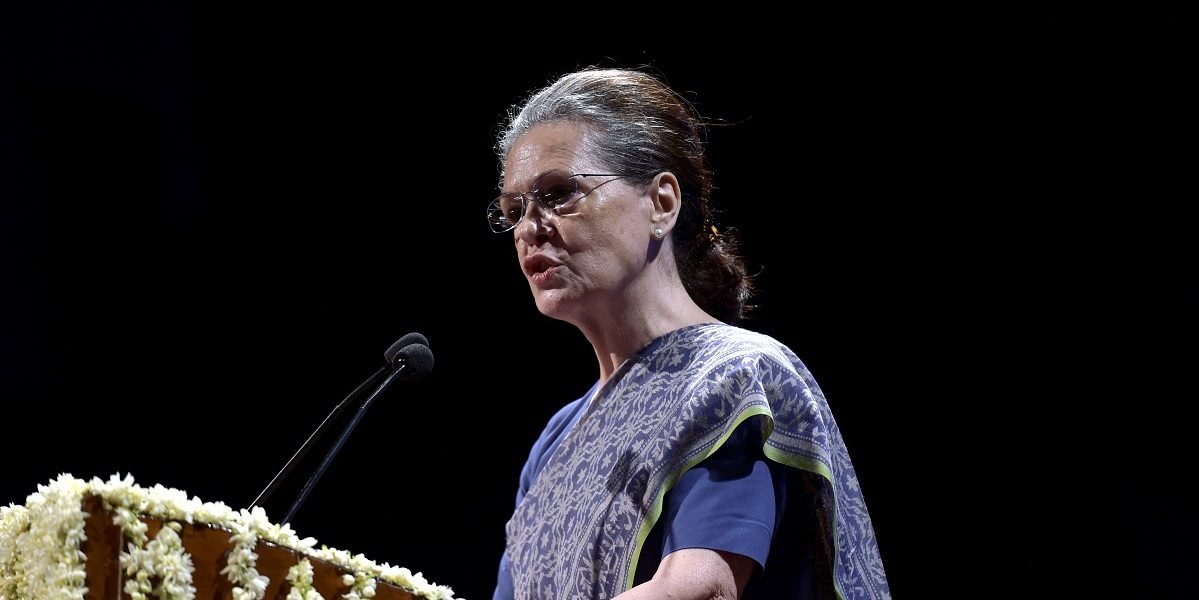 New Delhi: After a day long deliberation, the Congress Working Committee (CWC) threw in a surprise and announced Sonia Gandhi as the interim president of the party. Just a few minutes before this decision was announced, Rahul Gandhi said late on Saturday that the process of choosing the new party chief was interrupted by “disturbing reports of violence coming in Jammu and Kashmir and Ladakh”.

Sonia Gandhi’s selection also comes as a surprise because Rahul Gandhi has previously maintained that the new president will not be from his family.

Sonia Gandhi’s selection puts to rest speculations that were flying around over the past few days. There appeared to be a tussle between the party’s senior leaders and young Turks regarding who would be the next president. Announcing the decision, Ghulam Nabi Azad said that the CWC has finalised Sonia Gandhi’s name as the interim president.

Relying on the Gandhi family again

Gandhi’s selection means that in the face of internal differences, the CWC had to quell the dissonance by eventually relying on a leader from the Gandhi family.

Even in the past, the Congress has invariably relied on someone from the Gandhi family to quell dissent within the party ranks. An ailing Sonia Gandhi, who had more or less pulled out from the day-to-day affairs of the party, has come to the party’s rescue again.

Sonia Gandhi led the party to two successive wins during her tenure as the party president. The CWC hopes that Sonia Gandhi will reignite the party as much as it has relied on her to quell the internal turmoil.

Under Sonia Gandhi’s leadership, the Congress made important political alliances and encouraged new state-level leaderships, aspects which were absent during Rahul Gandhi’s tenure.

National spokesperson Randeep Surjewala said that the party had to turn to Sonia Gandhi’s leadership as she had led the party successfully in the past and had the best ability to lead the party in the present. He refused to disclose which leaders were discussed for the party president’s post. He added that the differences in the party and the issues discussed in the CWC meeting were “internal matters” of the party.

What is clear from Surjewala’s statement is that the party will opt for an organisational election in the days to come to appoint a full time president. But he did not clarify when these elections would happen.

Commentators have suggested that the absence of a chief from the Gandhi family will force the BJP to change its line of attack on the Congress. The saffron party, especially Prime Minister Narendra Modi, popularised the slogan “naamdaar” (privileged) vs “kaamdar” (worker), the latter being the BJP.

However, with the Congress failing to look outside the Gandhi family, the BJP slogan may receive another boost. The party also passed three resolutions. In the first, it thanked Rahul Gandhi for leading the party by example and “foregrounding issues of all sections of populations, especially the marginalised”. The second resolution said that the CWC consulted all Pradesh Congress Committee presidents and Congress representatives in the districts, legislative assemblies and parliament. All of them felt Rahul Gandhi should play a central role in the party’s functioning and not resign. But since Rahul Gandhi wants to take accountability for the defeat in elections, the CWC unanimously chose Sonia Gandhi as the next interim president until elections for the post happen. 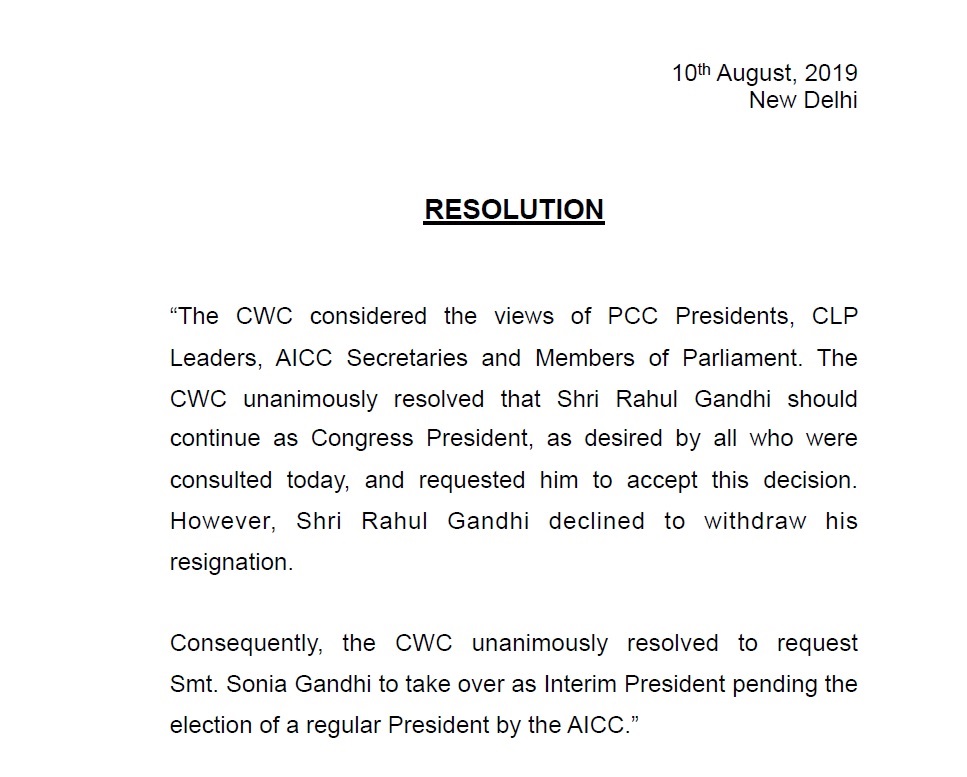 In the final resolution, the CWC expressed concern over the Centre’s clampdown in Jammu and Kashmir and demanded that an the Union government allow an all party delegation to travel to the state. The resolution also said that the CWC was “extremely concerned” over the arrest of mainstream political leaders of the state.

Discussion interrupted by reports of violence in J&K

Speaking to reporters after exiting the meet, Gandhi said that the CWC stopped discussions on the next chief of the party after “disturbing reports of violence” were reported from across Jammu and Kashmir and Ladakh.

“We stopped our deliberation on the congress president issue, and reflected on the violence in the UTs of Jammu and Kashmir and Ladakh. We are extremely concerned,” he said.

“The PM should tell with full transparency and disclose to the nation what is the situation in J&K and Ladakh,” Rahul Gandhi added.

He said he was called by the CWC only to discuss the important matter of reported violence in the two newly created Union Territories. “The CWC continues to discuss the matter of the next Congress president,” he said. He and Sonia Gandhi had earlier recused themselves from the discussion on who should be the next party chief.

Rahul Gandhi, Congress: Their (Congress Working Committee) discussion is still going on. I was especially called because a discussion was happening on Jammu and Kashmir. pic.twitter.com/yFSynxGrUb

Before the meeting began, sources said that a number of leaders, including state chiefs and MPs, had backed Rahul Gandhi to continue as the president, despite his refusal to reconsider his resignation. After Rahul’s insistence to look for alternatives, the group committee had formed five sub-committees, divided based on regions, to come up with names for the president.

There are speculations flying that the CWC hasn’t been able to reach a decision, as the five CWC groups formed to give their choice for the post of president differed to a great extent. The Congress ranks are divided on whether the party should have a young Turk like Jyotiraditya Scindia and Sachin Pilot or seasoned leaders like Mallikharjun Kahrge or Mukul Wasnik with organisational and administrative experience. This seems to have delayed the decision. However, as Rahul Gandhi said, the CWC is still finalising a name and the decision should come in couple of days.

Hours earlier, some state leaders said that they have given their preference for the post of party president.

I have spoken on our choice for the Congress President .Someone who we the young India relates to and someone who leads from the front.Someone who fights for the rights even when the mood of the majority in India is for retribution.The name of the President will be announced soon

The party’s top decision-making body reconvened at around 9:15 pm to discuss reports of the five sub-groups.

UPA chairperson Sonia Gandhi and Rahul Gandhi recused themselves from the consultation process, saying they they cannot be part of it as they have been Congress presidents in the past. They said they would not like to influence the opinions of party leaders in any manner.

“There is process of consultation and naturally Rahul ji and myself, we cannot be part of that consultation,” Sonia Gandhi told reporters.

Asked how their names were in the sub-groups for consultations, she said, “That’s obviously a mistake, because we cannot be in that.”

The CWC decided to have consultations with leaders from across the country and it was divided into five groups for different regions – northeast, east, north, west and south.

Congress chief spokesperson Randeep Surjewala said several leaders who could not make it to New Delhi were consulted over phone. 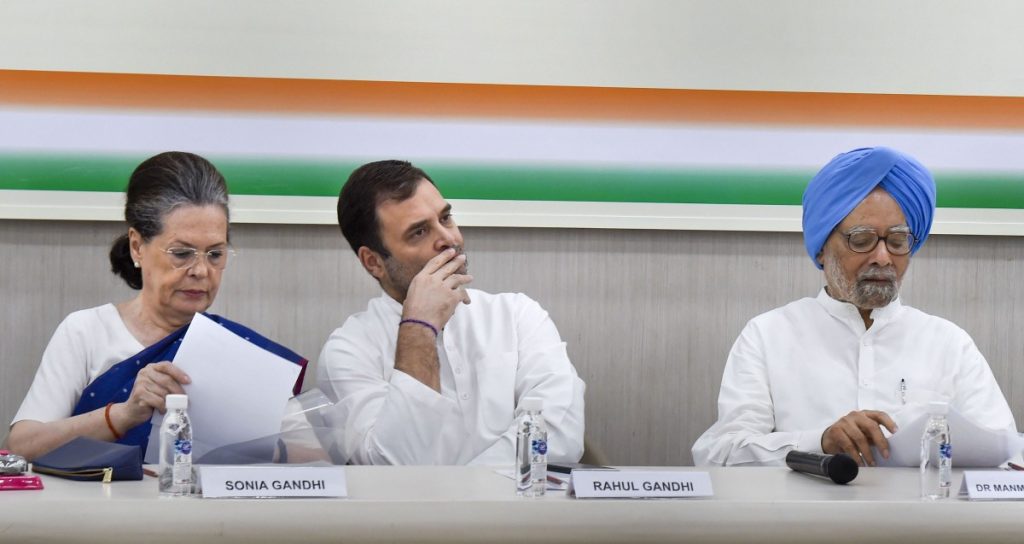 The CWC began its meeting by urging him to continue as party chief in the wake of the BJP’s “onslaught on democracy and dissent”, Surjewala said.

Gandhi’s insistence that the next party chief should be a non-Gandhi has made the task of Congress leaders difficult. He plans to spend the next two days in Wayanad, his constituency, in flood-hit Kerala.

Several members such as Shashi Tharoor have publicly expressed their opinion that the delay in selecting the new Congress chief is harming the party. Tharoor said on Saturday the new chief should be a person who can energise the party’s organisation and inspire the voters, asserting that the Congress cannot afford “business as usual”.

1/2 For those following the #CWC meet to decide on a new @INCIndia President: https://t.co/fpbXi9SBhV
My position remains what I first articulated more than a month ago: CWC should choose an Interim President asap, then resign & announce open elections for both President & CWC.

The party has also been grappling with a series of desertions by leaders in Karnataka and Maharashtra, the latest being that by ex-Congress Rajya Sabha chief whip Bhubaneswar Kalita and MP Sanjay Singh.

With elections in Maharashtra, Jharkhand and Haryana coming up, the party is hoping to resolve the leadership issue quickly and move forward.