Soul of Our Country Is Being Trampled Under a Conspiracy: Sonia Gandhi

Speaking at the Jan Sarokar meeting, she said the current government has "undermined the welfare architecture that was laid down over last 65 years". 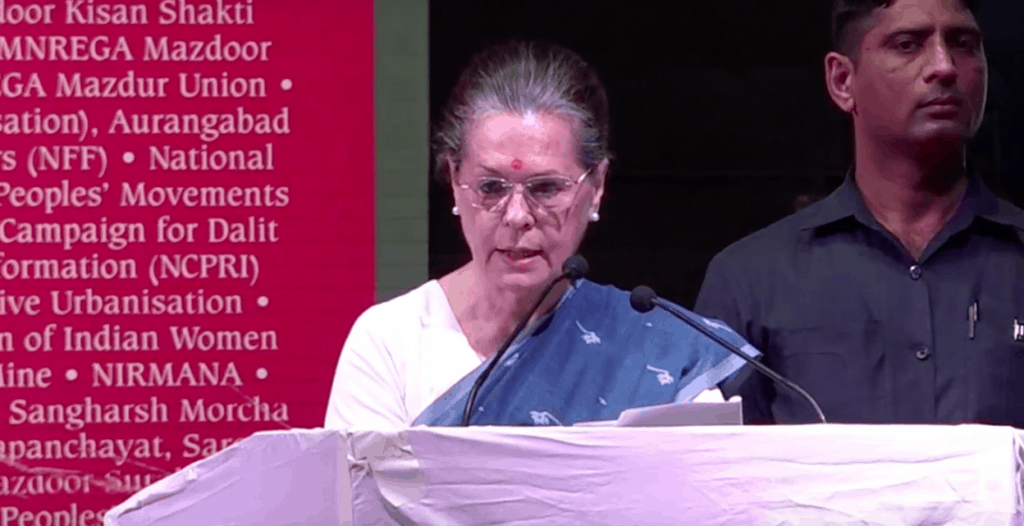 New Delhi: Speaking at meeting organised by a coalition of social movements in Delhi, Sonia Gandhi launched a scathing attack on the BJP. “A few years ago we would not have even thought that we would have to gather here today in this situation. In the last few years, we have seen that the soul of our country is being trampled under a well-planned conspiracy. It is a matter of great concern,” Gandhi said.

She was speaking at the ‘Jan Sarokar- People’s Agenda, 2019’ meeting at the Talkatora stadium in Delhi on Saturday. It was organised by a coalition of several social movements from across the country ‘to issue a clarion call to all secular parties to adopt a strong and positive pro-people agenda for the 2019 election.’

Gandhi also criticised the BJP’s brand of patriotism. “Today, we are being taught a new definition of patriotism while those not accepting diversity are being called patriots. Discrimination among our own citizen is being justified on the basis of caste, religion and ideology” she said.

Speaking of the threat to institutions under the Narendra Modi-led government, Gandhi said, “Regressive forces have systematically dismantled our institutions. The current government has undermined the welfare architecture that was laid down over last 65 years.”

She also attacked the BJP over its stand on issues such as consumption of beef. She said:

It is being expected of us that in the matters of food, dresses and freedom of speech, we should accept the whims of a few people. The present government is not ready to respect disagreement at all. If people are assaulted for staying true to their belief, the government turns blind eye to them. It refuses to implement the rule of law, its basic duty.

Activist Aruna Roy, who was a member of the National Advisory Council in the UPA government, also spoke at the meeting and criticised the opposition for not having come up with a common minimum programme.

“We had thought that the opposition parties will be able to come up with a common minimum programme and we can discuss that. But that has not happened. Political parties have not put forth any such programme. That is why we thought that we should meet representatives of political parties and discuss the last five years and what are the needs of the country going forward,” she said.

The national meeting over the course of the day discussed various issues faced by the country and possible solutions. Issues like low and delayed MNREGA wages, forest rights, farmer distress, lack of employment opportunities were some of the key challenges discussed. “It is clear that the government has failed miserably in giving a better live to a majority of the Indians. It is only the top 10% whose lives have improved,” Roy said.

Now, the coalition will hold a series of meetings in 20 states “so that people connected with different social movements” can bring their issues to the fore and not allow “divisive identity-based politics to dominate the 2019 national election.”