States Rally Against Centre, Demand Postponement of JEE and NEET

Seven chief ministers and Sonia Gandhi discussed the options available before the state governments to oppose the Centre's resolve to hold the exams in September. 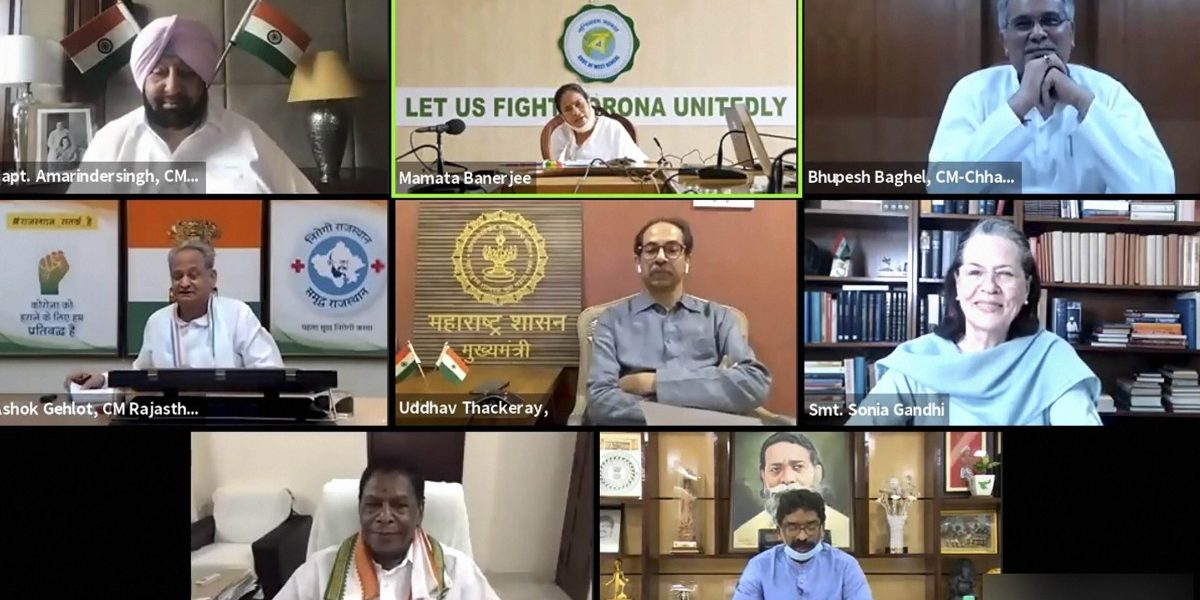 The seven chief ministers who attended the meeting with Sonia Gandhi. Photo: Screengrab via PTI

Such has been the opposition towards the idea that rival opposition parties are beginning to find common platforms to resist the Centre’s move. On Wednesday, the Congress and Trinamool Congress jointly mobilised heads of states to rally against holding JEE and NEET in September. West Bengal chief minister Mamata Banerjee said that all chief ministers must knock on the Supreme Court’s door again to request the deferral of JEE and NEET.

While hearing a petition by 11 students from 11 states, the Supreme Court had ruled against any deferral of the examinations. It reasoned that students were not ready to “waste” a whole year because of the pandemic. Thus, JEE is supposed to be conducted from September 1 to 6 while NEET is scheduled on September 13 as planned earlier.

However, since all arrangements have to be overseen by the state governments, many of them feel that logistics involved in the process of conducting physical examinations would endanger students’ lives and lead to a possible surge in COVID-19 cases.

“Let us go to the Supreme Court. Let us talk about this matter. This is mental agony for students. I have not seen so many atrocities in a democracy. The situation is very serious. We have to speak up for the children,” Banerjee said, while alleging that state governments were being “bulldozed” by the Centre in the name of cooperative federalism. She also urged all the chief ministers who attended the virtual meeting to act fast as the states hardly have any time to conduct the examinations.’ 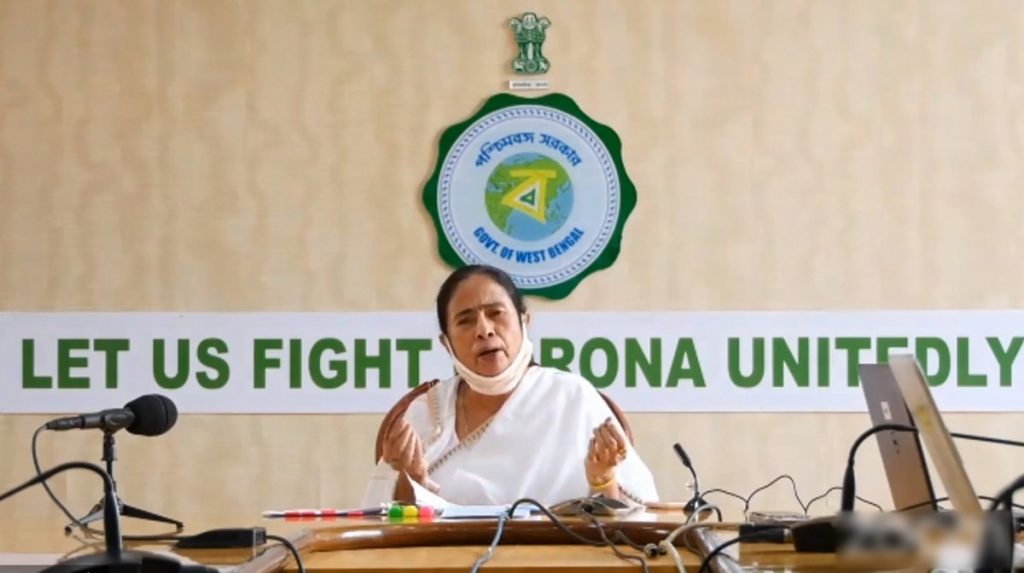 Mamata Banerjee during the virtual meeting. Photo: Screengrab via PTI

“Exams must happen, but we are hurrying up. In my state, we have very few centres. To accommodate these students, we will have to open all hotels and buses. Chances of contracting COVID-19 will be higher. The Centre must help by taking more time. Otherwise, the Centre will blame states all over again if something goes wrong. We will have to jointly raise these issues,” Soren said assertively.

Thackeray was even more forceful in his opposition. He said that Maharashtra was only gradually emerging from a total lockdown and schools and colleges will have to remain shut for a longer period. “We have to decide whether we want to fear or fight the government,” he said. Uddhav Thackeray during the virtual meet of the chief ministers. Photo: Screengrab via PTI

Soren suggested that all of them should meet the prime minister to discuss their worries before moving the apex court, to which Banerjee replied, “We can meet the PM, but if he does not listen then we must move the Supreme Court.”

Many other chief ministers who did not attend the meeting to avoid any direct confrontation with the Centre also have opposed its decision to hold the JEE and NEET examinations in a hurry.

Odisha CM and Biju Janata Dal chief Naveen Patnaik wrote a letter to the Union education minister Ramesh Pokhriyal expressing his reservations about the conduct of JEE and NEET. “…in view of the prevailing pandemic situation in the country, it would be highly unsafe and perilous for the students to visit the test centres physically to appear in these tests. Besides, as frequent lockdown/shutdown are being enforced by the concerned district administration due to sudden escalation of the covid cases locally, the local transportation too gets disrupted,” Patnaik’s letter read

Dear CM @Naveen_Odisha , am glad to read this letter. Thanks for supporting the cause of NEET /JEE and for realising that #StudentLivesMatter

Question for you-
Why my young friends who for long protested with #BPUTStopKaroNa weren’t supported by you?

Similarly, BJP ally All India Anna Dravida Munnetra Kazhagam (AIADMK), which heads the Tamil Nadu government, also wrote to the prime minister to reconsider the Centre’s decision and alternatively suggested that Class XII marks could be made the basis of admission into medical and engineering colleges this year.

Delhi’s Aam Aadmi Party government has also requested the Centre to cancel the exams, but chief minister Arvind Kejriwal declined the Congress and TMC’s invitation to join the meeting. Similarly, Congress president Sonia Gandhi wanted to extend an invite to Kerala CM Pinarayi Vijayan – who has also opposed the Centre’s move – to join the meeting but faced stiff resistance from the state party unit, which recently moved a no-confidence motion against the Left Front government.

Also Read: As Greta Thunberg Raises ‘Postpone NEET, JEE’ Pitch, Here’s What the Chorus Is About

It is believed that the leaders who joined the meeting on Wednesday will likely approach Andhra Pradesh and Telangana chief ministers Y.S. Jagan Mohan Reddy and K. Chandrasekhar Rao to rally behind them. Both states are severely affected by the pandemic.

In the days to come, JEE and NEET will likely become yet another contentious issue between the states and the Centre. The Union education minister Pokhriyal has remained firm in his resolve to conduct the examinations.

In a recent interview to Doordarshan, he said:

“There are many stakeholders asking us why we are not conducting NEET and JEE (Main). They are worried about the delay and how long will the students keep preparing for these tests. We have postponed the exam twice. But I have been informed by the NTA Director-General that till yesterday, 7.25 lakh out of 8.58 lakh candidates for JEE (Main) have downloaded their admit cards. Secondly, the number of centres has been increased. In one (test) centre there will not be more than 150 students. Almost 99 per cent of the students have got centres of their choice. Only 450 students have requested a change of centre and NTA is ready for that. We are with the students.”

However, the state governments, which have to take care of all logistics, have said that although students would not want to “waste” a year, the government should see to it that alternative arrangements are made for them instead of asking them to physically appear to take the exams. This, they say, will require many to travel long distances and stay in hotels, increasing risks of contracting the infection.

The meeting took on a larger agenda when the Sonia Gandhi, who also participated in the meeting, took the discussions towards the issue of the Centre failing to compensate the states with the GST dues it owes to the state governments. 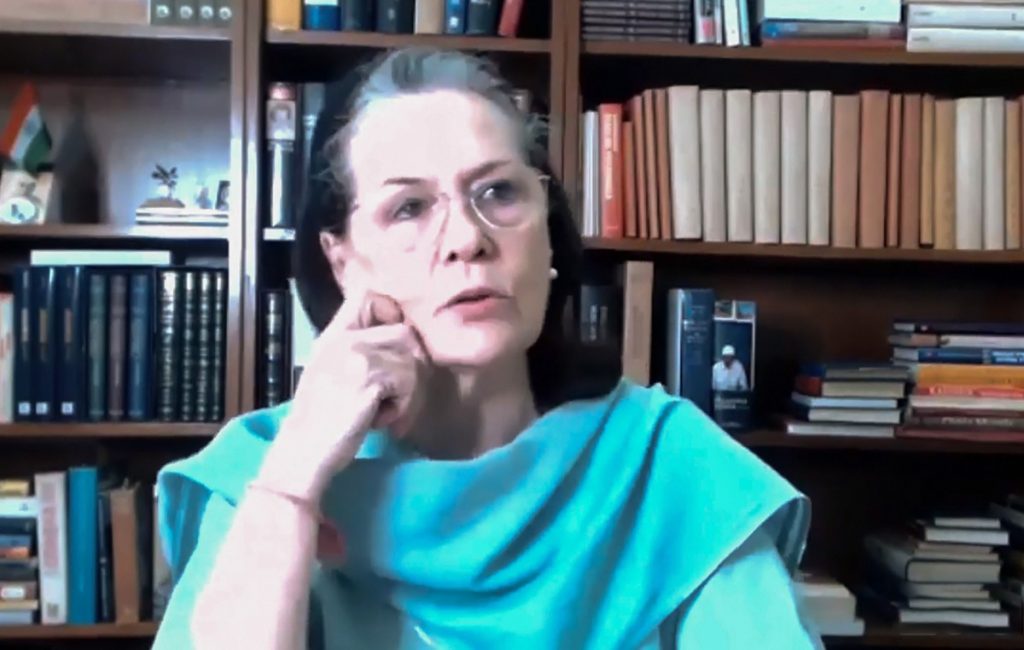 NEET-JEE aspirants are worried about their health & future.

They have genuine concerns of:
– fear of Covid19 infection
– transport & lodging during pandemic
– flood-mayhem in Assam & Bihar.

GOI must listen to all stakeholders & find an acceptable solution.#AntiStudentModiGovt

Postponement of examinations in the middle of a raging epidemic is such an obvious demand with such overwhelming support. But we have a regime which has inherited the colonial legacy of not listening to the voice of students. #INDIAunitedtoPostponeJEE_NEET #StudentsLivesMatter https://t.co/62eDkklojB

Samajwadi Party chief and former Uttar Pradesh chief minister Akhilesh Yadav too attacked the Centre for being “stubborn” on the issue. He said the Centre should not ask students to take the exams without making proper arrangements for “corona safe transportation and examination centres” for them.

Interestingly, the Bahujan Samaj Party chief Mayawati supported the Centre’s decision and asked the students to prepare well for the exams.

I would like to tell the lakhs of students appearing for NEET & JEE to put in their best efforts and prepare well for exams. Also, I would like to ask the concerned authorities to take all precautions & ensure safe conduct of exams amid #COVID19 pandemic: BSP chief Mayawati pic.twitter.com/Xp61pY0Jaz