'Some People Were Kept Away From Us': MEPs Visit Kashmir Amidst Widespread Protests

Hermann Tertsch, a parliamentarian from Spain, said the delegation was 'very conscious' that a section of locals were kept from interacting with them. 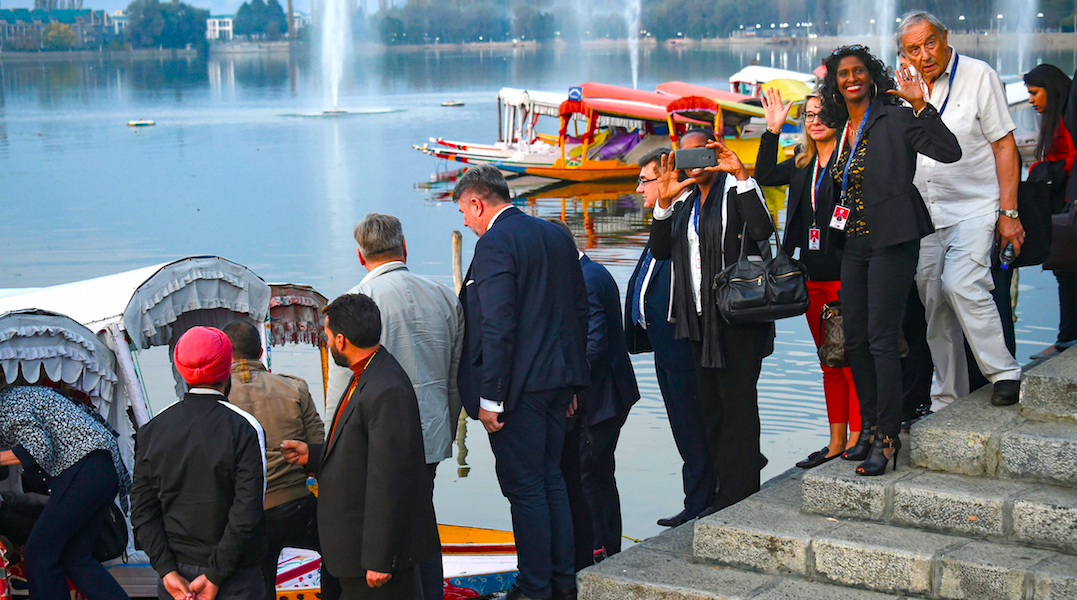 Members of European Union Parliamentary delegation board a shikara ride at Dal Lake in Srinagar, on October 29. Photo: PTI

Srinagar: On a two-day visit to Kashmir to “look for facts” about the situation in the region since the reading down of Article 370, the parliamentary delegation of the European Union (EU) on Tuesday met 15 groups including members of a lesser-known civil society forum, a delegation of panchayat representatives and leaders of Bhartiya Janta Party.

This is the first foreign delegation to visit the restive region after the Centre took away J&K’s special status and bifurcated the state into two Union Territories (UTs) on August 5.

The delegation, which arrived in Srinagar in the morning, was escorted by security from the airport in a cavalcade to a high-end private hotel in the city.

“The EU delegation met around 15 delegations which comprised 50 to 60 people including some youth activists, panches, sarpanches, recently elected chairpersons for the Block Development Councils and a women’s group,” said an official.

The visiting delegation met the GoC 15 Corps and Lt. Gen. K.J.S. Dhillion, at Badami Bagh cantonment area, the official said. After winding up their meetings in the evening the EU lawmakers took shikara rides in Dal Lake.

“We are here looking for facts [about the Kashmir situation],” said Hermann Tertsch, a parliamentarian from Spain, who is part of the high profile delegation. “It is an organised trip.” 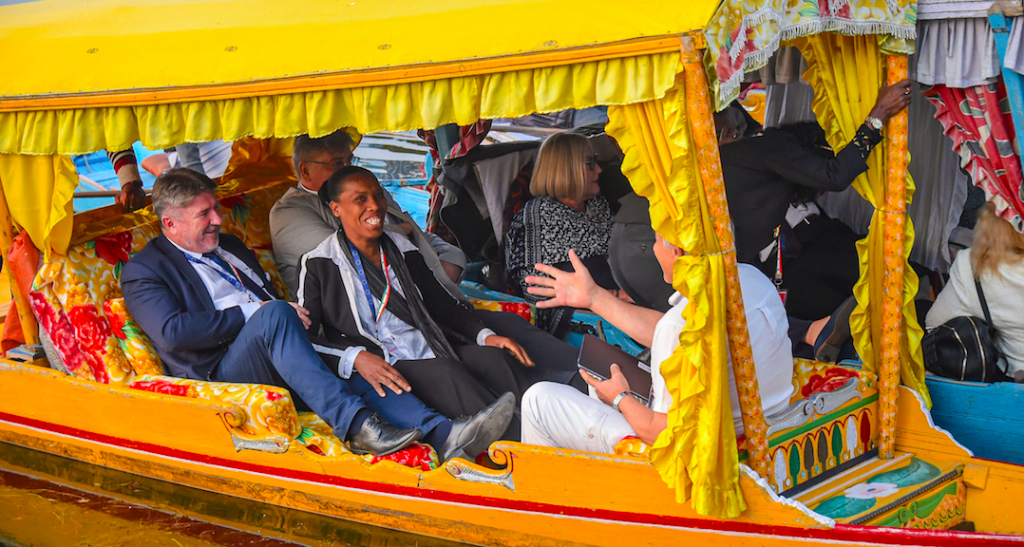 The MEPs on a shikara on the Dal Lake. Photo: PTI

Tertsch said the members were “very conscious” about their Kashmir visit. “We are here to get some news about what is happening.”

Tertsch also said he did not have enough facts to draw a “conclusion” on the Kashmir situation yet. But added that “some people” were being kept away from them.

“Some are not, but some people were kept away [from the lawmakers] and we are very conscious about it that some people are being kept away from us,” he said.

Touseef Raina, an activist from Baramulla who led a youth delegation to the meeting with EU lawmakers said they told the visitors that the violence and bloodshed would not result in a resolution of the Kashmir issue.

“For 30 years we have only seen bloodshed, but nothing has change on the ground,” said Raina. “We could draw inspiration from the European Union to arrive at a solution to the Kashmir problem.”

The visit of the delegation, at the invitation of the little-known International Institute for Nonaligned Studies has kicked up a political storm with opposition noting the irony of European legislators being taken to Kashmir when most Indian politicians were being stopped from visiting the region.

According to the EU office in India, the ongoing visit is not an “official visit” of the European Parliament and the EU’s representatives to India have also not been involved in the organisation of the trip. The MEPs are travelling in their “private capacity”.

Apart from their meeting with Modi, the EU lawmakers also met with National Security Advisor Ajit Doval over lunch on Monday. They were briefed about the situation in Kashmir.

The situation in Kashmir remained tense for the 86th straight day today, October 29, since the August 5 move. Markets continue to remain shut and public transport is off roads, largely in protest.

Hours before the delegation set out for its two-day visit to Kashmir, protests erupted at several places across the Valley, including at Srinagar.

There were reports of clashes from various areas in the city, including downtown areas of Hawal, Soura and Aanchar and uptown areas of Natipora, Chanpora, and Rambagh.

A police official, requesting anonymity, said at least 50 incidents of stone-pelting were reported from across Kashmir.

“We have reports on six people having been injured at different places downtown,” the police official said.

People in Kashmir have worked out their own shutdown schedule. Everyday, markets open for two hours in the morning across Kashmir, including at Lal Chowk, Valley’s commercial hub. However, for the remaining part of the day, the shops remain shut. Pprivate traffic has considerably grown in the last few weeks.

However, the markets were closed on October 29, in protest against the visit of the EU delegation which, according to media reports, included 22 members belonging to right-wing or far-right parties in the UK, France, Germany, Italy, Poland, Czech Republic and Slovakia. 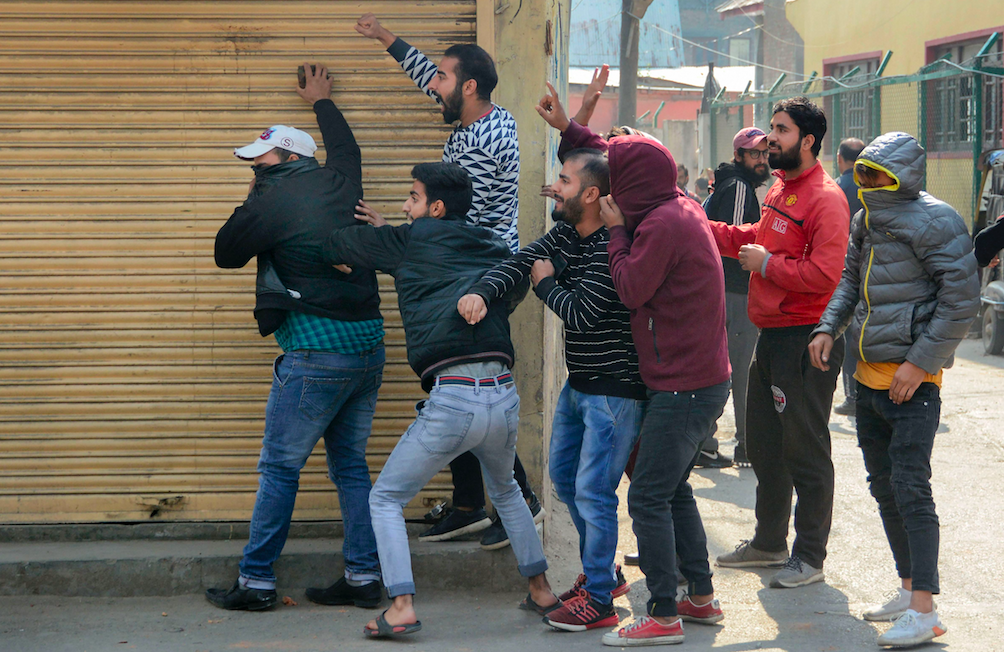 Youth protest against the EU delegation’s visit, at Srinagar on October 29. Photo: PTI

At many places, the roads were strewn with stones and roadside vendors, who usually put up their stalls in various areas, were absent.

“Wondering what outcome GOI expected by sending a group of mostly right-leaning Islamophobic EUMPs to Kashmir? Were you expecting nine million oppressed Kashmiris to lay out a red carpet for them?,” tweeted Iltija Mufti, who operates her mother and former chief minister Mehbooba Mufti’s handle.

A youth from Dalgate area of Srinagar Shuib Nabi said the visit of EU parliamentarians was “state-sponsored to paint a picture of normalcy in Kashmir.”

“Mainstream leaders are under detention, hundreds of youth have been booked under the Public Safety Act and foreign journalists are barred from visiting and covering Kashmir. In such a situation handpicking a delegation is an attempt to tell the world that situation is normal in Kashmir which is far from the truth,” said Nabi.

“Let the members meet youth on the ground and those who have been detained, they will come to know about the real picture of Kashmir.”