The Return of Sasikala Natarajan

In her journey from Bengaluru to Chennai, Sasikala left a powerful political message about her future and politics. But will she be able to pull it off like her best friend? 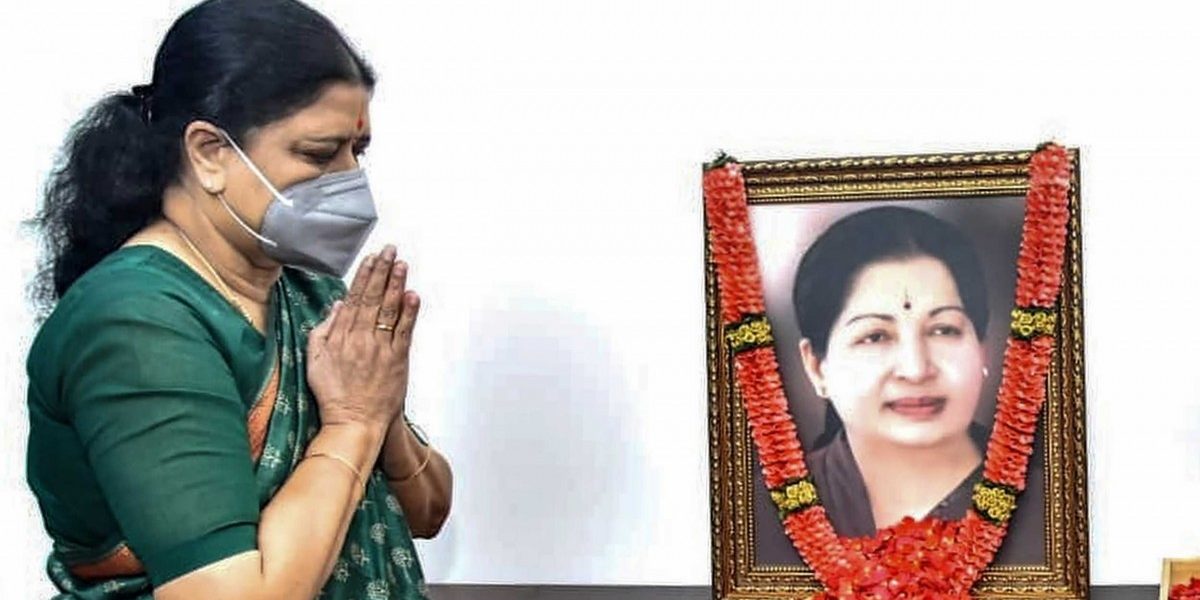 When M.G. Ramachandran passed away on December 24, 1987, without spelling out a plan for the party he had founded, J. Jayalalithaa was an unlikely successor. She faced much humiliation, fought many battles and braved tall odds to finally claim her legacy. In 1989, Jayalalithaa established an unassailable control over the All India Anna Dravida Munnetra Kazhagam (AIADMK), and led it with an iron fist until her death in 2016.

On February 8, when V.K. Sasikala took more than 23 hours to reach Chennai from Bengaluru, where she had served a four-year imprisonment for a disproportionate assets case, she perhaps thought of doing a Jayalalithaa, her confidante and one-time ‘soul sister’.

Sasikala’s 23-hour journey by road, marked by visits to temples and rousing welcomes at various points en route, sent a powerful political message: that she was here to stay and fight. The journey also had its share of drama. Despite warnings by the ruling AIADMK – the party leaders had complained to the police that Sasikala was wrongly using the party flag – she drove in a car used by Jayalalithaa.

On entering Tamil Nadu, she shifted to another car belonging to an AIADMK functionary – who was then dismissed from the party – and continued to sport the flag. News reports said the driver who drove Sasikala from Bengaluru to Chennai had also driven for Jayalalithaa. In Chennai, Sasikala drove to MGR’s Ramapuram house and paid her respects at his memorial.

Sasikala’s nephew and founder of the Amma Makkal Munnetra Kazhagam (AMMK), T.T.V. Dinakaran, called the reception accorded to her “historic and a turning point in Indian politics”.

Priyan, a senior journalist, agreed: “This is not something I have seen in recent times. … In Sasikala’s case,” the crowds may have been the result of “people being curious or sympathetic”.

Addressing journalists at Vaniyambadi, Tamil Nadu, Sasikala said she intended to be active in politics. When asked why the AIADMK had closed off Jayalalithaa’s memorial, she said the party leaders “are afraid”. “The fact that they send ministers to lodge complaints against me also betrays their fears.” Her goal, she added, was to defeat the “common enemy by remaining united”.

The AIADMK has refused to see the hints in Sasikala’s call for unity and is clearly uneasy about her return. Sources said party leaders had been instructed to not react on news of her and to stay away from primetime TV debates on the topic.

While a section of leaders ruled out any possibility of rapprochement with Sasikala, some others have either stayed silent or have hinted otherwise. One minister had even suggested that the differences “are fraternal and can be sorted out”.

But chief minister Edappadi K. Palaniswami seems to be in no mood to relent. He came down heavily on Sasikala and Dinakaran at a public meeting on Wednesday, saying “They could never become part of AIADMK again. Their efforts to capture the party will never succeed. Only an ordinary cadre of the AIADMK can be the chief minister.”

“For the last four years, they have been free and have worked independently,” Durai Karuna, a senior journalist who has been covering the AIADMK since its inception, said. “The seniors might not want to lose that again.”

Some party members also felt that the party was perhaps giving “undue importance” to Sasikala. “We have been told not to talk about her, but the party is also overreacting. There was no need to shut down Amma’s memorial or to go to the police. Sasikala is perhaps best ignored,” a second-rung AIADMK leader said on condition of anonymity.

The ultimate question is whether Sasikala can be written off so easily. After all, as Karuna pointed out, she shadowed Jayalalithaa for over three decades and had a decisive role in the party, both when in power and out of it.

“She has been preparing the list of AIADMK’s candidates since the 1989 elections,” Karuna said. “Every MLA, MP and minister has been her choice. Sasikala and her family have been an irrefutable power centre within the AIADMK.”

During her first, rather uneventful, meeting with Jayalalithaa in 1984, Sasikala may not have known that she would go on to accrue that kind of power. She comes from a modest background, having been running a video rental store, and met Jayalalitha to secure a contract to cover the latter’s political meetings. But soon, a friendship grew.

After MGR died, Sasikala moved in with her husband M. Natarajan – their marriage in 1973 had incidentally been presided over by M. Karunanidhi – to Poes Garden, a posh area of Chennai, to help Jayalalitha through a traumatic phase. But in 1990, Jayalalithaa asked Natarajan to leave the house because she felt he was crossing some boundaries. But Sasikala chose to stay back with her.

According to the book A Lone Empress: A Portrait of Jayalalithaa (2020), by writer and journalist Vaasanthi, Sasikala’s decision overwhelmed Jayalalithaa. “Sasikala had sacrificed her whole life in order to be with me, and give me moral support and take care of me,” she is quoted as saying in an interview to The Hindu in the book.

Since then, the party cadre has referred to Sasikala as ‘Chinnamma’ (mother’s younger sister) while Jayalalitha was ‘Amma’.

However, in 2011, Jayalalithaa threw Sasikala out of the house saying Sasikala was conspiring against her. But Sasikala was back in Poes Garden within a few months, after apologising and saying she wouldn’t get involved in party affairs. “I only want to remain a loyal sister to her,” Sasikala’s statement at the time read. And until Jayalalithaa’s death in December 2016, Sasikala stayed by her side.

“I think Jayalalithaa couldn’t have pulled it off without Sasikala by her side after MGR’s death. Given the kind of hostility she had met at that time, Jayalalithaa would have simply vanished from Tamil Nadu’s political scene” Shalin Maria Lawrence, a Chennai-based activist and political observer, said. “Sasikala was the woman behind her phenomenal success, she was the mastermind behind the show. She knows Tamil Nadu’s electoral politics like the back of her hand.”

“If you remember, many political leaders called on Sasikala soon after Jayalalithaa’s death. I don’t know about her vote bank, but Sasikala is definitely here to shake and move the AIADMK.”

Those close to Sasikala hoped she would repeat Jayalalithaa’s feat in 1989 – to take the party from its ‘adversaries’ – but Karuna feels that might be too much. “She might have shadow-controlled the party and the government, but unlike Jayalalithaa, Sasikala has never been in touch with the people or the party cadre,” he said. “We don’t know if she enjoys any support among the masses – the kind enjoyed by Jayalalithaa.”

In this regard, he added, “one has to hand it to T.T.V. Dinakaran for organising a rousing reception for her”, but he remained doubtful whether it would translate to votes.

Nonetheless, sources said Sasikala and her supporters are banking on the electron’s outcome to wrest control of the AIADMK. Dinakaran even said in a recent interview that, “after elections, one has to see where [Palaniswami’s] supporters are going to be.”

And like in 1989, when there was a political split, Priyan the journalist said this time there is an “emotional split” within the AIADMK. “The party is officially with Palaniswami and O. Paneerselvam, but the reception given to Sasikala has sent a different message”.

According to him, “Palaniswami is taking a calculated risk”: that even if the party doesn’t return to power, winning a respectable number of seats could still leave him the sole leader. “But if Sasikala and Dinakaran decide to campaign against the AIADMK, things might just turn worse.”

Then there’s the spectre of the Bharatiya Janata Party – which might just force Sasikala and Palaniswami into an alliance, but this is unlikely, Priyan said. “Palaniswami is clearly not keen.” But if the AIADMK loses badly, “a post-election merger could be unavoidable.”

However, senior journalist R. Mani pointed out that Sasikala herself can’t contest elections for six more years. “Even if there is a pre-election merger, Sasikala will remain disqualified, and I don’t know if she will want to allow Palaniswami to run another term as chief minister,” he said.

Unlike in 1989, Mani continued, neither Sasikala nor Palaniswami are “towering personalities”, which makes things all the more difficult. “In 1989, Rajiv Gandhi maintained was equidistant from both factions. But in the current case, the BJP may have the last word in settling things.”

Indeed, there are both similarities and differences between 1989 and 2021. If it is the similarities that eventually hold out, this year’s elections may well be a watershed moment for the AIADMK.