The occasion may be the inauguration on the Sardar’s birth anniversary but the purpose is to enable Narendra Modi to promote the claim of being the sole custodian of national unity and security.

Before getting down to writing this piece and because the highly engaging and meticulously planned Bangalore Literature Festival took me away from my work desk for most of the last few days, I decided to Google the latest news and articles related to the inauguration of the colossal statue of Sardar Vallabhbhai Patel.

The first page of search results provided a strange irony: ‘Republic Day-like event planned for unveiling of Statue of Unity‘ was the headline of one of the items on top of the page. This was followed a few lines below by the encyclopaedic heading  ‘Sardar Patel, Father of Republic of India and Iron Man‘.

Headline writers are often the finest interpreters of intent and the two editors who wrote the headings, unknowingly and unwittingly, collaborated to make a distressing political point: in its overzealousness to secure monopoly rights on the Sardar’s political legacy, this regime has willy-nilly made celebration of his memory bigger than the Republic of India, the very state which he is being credited with having single-handedly unified.

Also read: Why the Statue of Unity Hasn’t Quite Generated the Euphoria BJP Craved

It makes little difference to the government that unveiling of the ‘Statue of Unity’ – accompanied by similar rituals, in greater measure, that are witnessed every January 26 – fly pasts by the Indian Air Force, playing of patriotic music by ceremonial bands of the Army, Navy, IAF, and folk dance performances from Indian states, may undermine sanctity of the Republic Day celebrations. The effort is obvious: make this event grander than the annual feature. One of the two most important national and annual observances has been undermined because someone will preside over the ceremony with the objective of securing permanence in national iconography.

Make no mistake, the occasion may be the inauguration on the Sardar’s birth anniversary but the purpose is to enable Prime Minister Narendra Modi to promote the claim of being the sole custodian of national unity and security.

It must also not be forgotten that the decision to construct the Statue of Unity was made by Modi as Gujarat chief minister and the foundation stone was laid on October 31, 2013 – by when he had already been anointed Bharatiya Janata Party’s prime ministerial candidate. 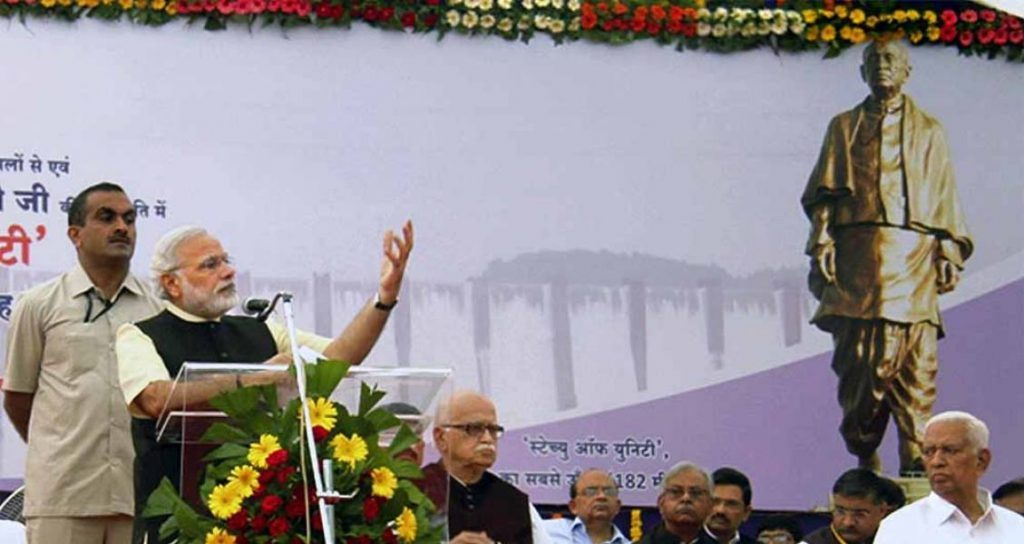 The Statue of Unity is commonly seen as the BJP’s attempt to insert itself into the freedom movement and its legacy by appropriating Patel as a counterpoint to Nehru. Credit: PTI

Only the naive would argue that there was no political motive behind the decision. The plan to forge the gigantic sculpture from melted-down metal and farming equipment collected from farmers who were asked to donate a symbolic tool was indication of using this project as a political vehicle. These scraps or iron were taken across India in processions even as Indians witnessed the electoral campaign.

The programme was a throwback to the most divisive Ram Shila processions taken out by the Vishwa Hindu Parishad in 1989 as part of the Ayodhya agitation and times with the watershed Lok Sabha polls that year when the BJP dramatically improved its tally from two to 85. Undeniably, the entire project has been timed to promote Modi’s political fortunes.

The project was in fact, first announced on October 7, 2010, to mark the beginning of the tenth year of Modi’s appointment as chief minister of Gujarat. Till June 2013, there was little development despite formation of a special purpose vehicle, the Sardar Vallabhbhai Patel Rashtriya Ekta Trust (SVPRET), because Modi’s prime ministerial ambitions were being blocked within the party.

But two days after Modi was named as chairman of the 2014 Lok Sabha election campaign committee of the BJP at the national executive committee meeting in Goa in June 2013, he announced a nationwide campaign to collect small pieces of iron from farmers for using it to build the proposed statue.

Its inaugural has now been timed with the impending assembly elections and the 2019 polls. The aim is clear – to enable Modi to position himself as the only Indian with the capacity to execute a project eulogising the Sardar. This puts the opposition in a quandary because any criticism of Modi’s showmanship will enable him to depict critics as being legatees of those who denied Patel his rightful place in the nation and history. In the process, not only will the Statue of Unity literally dwarf statues of all other Indians leaders of the, but the event will also enable the memory of the Sardar to rise imposingly over Mahatma Gandhi and more importantly Jawaharlal Nehru.

The unveiling of the Statue of Unity comes close on the heels of the event in Red Fort when Modi launched celebrations to mark the 75th anniversary of the Azad Hind government, formed by ‘Netaji’ Subhas Chandra Bose. This event, full of high bluster, was spent more in running down the Congress and previous governments than on recalling the significance of Netaji’s action and explaining reasons leading to his joining hand with the Axis powers to secure independence.

The event on October 21 was part of the politics of appropriation which the BJP and its affiliates have actively pursued in the past four and half years especially. Weeks prior to Modi’s show at Red Fort in the capital, Rashtriya Swayamsevak Sangh chief Mohan Bhagwat addressed a carefully handpicked elite gathering in another sarkari venue in the Indian capital – Vigyan Bhawan. Over his three-day interaction, Bhagwat deviated from previous sangh criticism of the freedom struggle and appreciated Congress role in securing independence.

Whether it is Modi unveiling Sardar Patel’s statues, launching anniversary celebrations of Azad Hindi Government or Quit India Movement (its 75th anniversary was marked by a special parliament session in August 2017), the public embrace of the legacies of political personalities like Dr B.R. Ambedkar, Jayaprakash Narayan, P.V. Narasimha Rao and of course Mahatma Gandhi, it is evidence that the Sangh parivar requires to appropriate the histories of other political forces in the country because its own history is not particularly laudatory.

Much has been written about the number of times that the RSS or its other affiliates clashed with the ideas and ideals of those personalities they are now seeking to appropriate. Patel for instance, whose stellar role in bringing an end to Mahatma Gandhi’s last fast was written as part of an article on this website has been consistently misused to construct an alternate history which revolves around his conflict with Nehru on various issues. Yet, the Sangh leaders or their rare ideologues do not acknowledge that the relationship between Nehru and Patel was based not just on disagreement but also on how these were sorted out.

Moreover, the Sardar was not a leader who camouflaged his Hindu nationalistic outlook. On the contrary, his affirmations in the constituent assembly, recognising the necessity of secularism for a democracy to be true to its spirit, provide evidence of the multi-layered personality that the Sardar was. A true soldier of Gandhi, he “stepped aside three times to enable Jawaharlal Nehru to become Congress president— in 1929, 1937 and 1946″ and never challenged Nehru’s leadership because of his faith in Gandhi’s judgement and conviction that it was the duty of “all Bapu’s soldiers to carry out his bequest”.

Despite being aware that the appropriation of nationalist icons by the Sangh parivar is historically flimsy, they still must necessarily pursue this path because neither do Sangh icons resonate nationally, nor were they part of the freedom struggle.

The three major episodes of the national movement – the Khilafat and Non-Cooperation movement, Civil Disobedience in the wake of Dandi March and the Quit India Movement, were conspicuous by complete absence of Hindu nationalists of all hues save those who were part of the Congress-led struggle. Although Nathuram Godse ceased to be a member of the RSS when he assassinated Gandhi, he was incubated in the RSS and retained links with the much idolised V.D. Savarkar.

A major component of the publicity blitz that has accompanied the unveiling is that this provides Indians indisputable bragging rights for their country being home to the world’s tallest statue. But the most immodest of claims shall be Modi’s for this event will be put on an audio spool and repeated ad nauseam till 2019 with the hope that it will enable BJP to add to its electoral narrative.

After being in power since 2014 and earlier for six years between 1998-2004, the party realises that popularity cannot be lasting unless it too can claim legacy rights to nationalist icons.

Even if they were not theirs.