Saira Shah Halim, CPI(M)'s Pick to Take on Babul Supriyo in Bypolls, Is Unafraid of Her Opponent

A newcomer in electoral politics despite family ties with veterans, Saira is keen to work against the tide of majoritarianism in politics. Supriyo, she says, has 'zero credibility.' 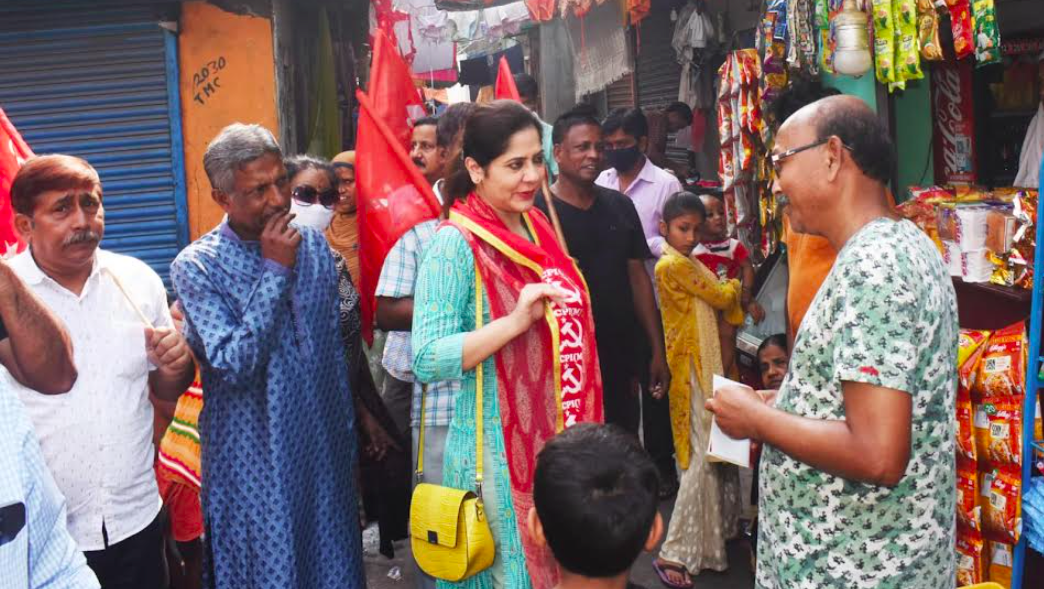 Kolkata: With a fortnight to go for the by-elections in Ballygunge necessitated by the death of Trinamool Congress leader Subrata Mukherjee, CPI(M)’s surprise pick Saira Shah Halim’s schedule reads like this: Garlanding Bhagat Singh on his martyrdom day at 9, talking to the press at 10, filing nomination at 12.30, public meeting at 5, door to door campaigning from 7 to 10.

Saira is not exactly new to politics although this is the first time she is contesting the polls.

“I have been there, done that. Dinner table conversations have always been about politics in my home. Only this time, I am myself the candidate. The party which has been a part and parcel of my life for the last two decades offered me the challenge and I grabbed it,” says the 43-year-old.

Her first floor apartment, which she has shared with her husband Dr Fuad Halim for the last 20 years is a stone’s throw from the city’s vibrant Park Street. This apartment had also been the residence of Fuad Halim’s father, the veteran Leftist leader and Speaker of the Bengal assembly for almost three decades, Hasim Abdul Halim.

Fuad Halim is an active Left leader and a physician known for his philanthropy. He was the CPI(M) candidate from Ballygunge in the 2021 assembly elections, where he received about 6% votes.

However, Saira says she is seeking votes in none of these capacities. 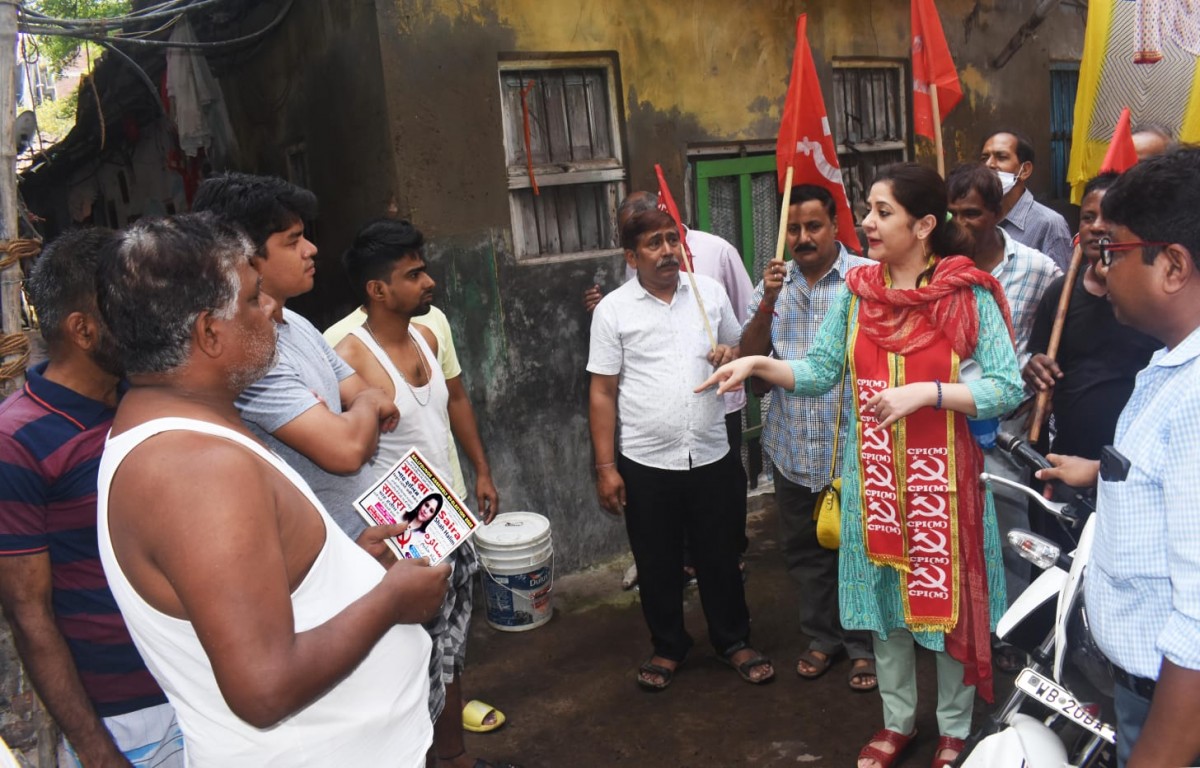 “I have my own credentials. I have actively campaigned against the National Register of Citizens and the Citizenship Amendment Act in Bengal and Delhi. I have been outspoken on the rights of religious minorities, on the issue of the hijab ban and on rights of the LGBTQ+ community on all platforms – TV debates, digital conclaves and public meetings. The local cadres proposed my name to the party because I have my own political identity. I am going from door to door and speaking to voters. I have my vision for the constituency,” she says.

Her outlook is in spite of the CPI(M)’s decline in popularity in the state – in power until 2011, it now has no MLAs in the assembly.

“People want to see a new face of the Left. That is perhaps why the party chose me. The old-school idea of Left leaders sporting shabby clothes and a worn-out look with a radical ideology no longer appeals to people in this age. As a prospective representative of your people, you need to impress them with your suave manners, fluency, sharpness and energy. I believe I tick off those boxes,” says Saira.

The CPI(M) recently revamped its West Bengal state committee by adding about 20 new and young faces and leaving out aged stalwarts like Biman Bose and Surya Kanta Mishra. Among the new inductees, student leaders Minakshi Mukherjee, Srijan Bhattacharya, Mayukh Biswas and Pratikur Rahaman are in their mid-30s or even younger.

The replacement of Mishra by Mohammad Salim as the state secretary is also being seen as a move aimed at appealing to the young. Not only in Bengal, in Kerala also, 13 septuagenarian leaders stepped away from the state committee, making way for newcomers.

Speaking to The Wire, Mohammad Salim said, “We were looking for a young urban cosmopolitan face who has worked previously for social rights, particularly for women and minorities. This is because everyone remembers what Babul Supriyo did in Asansol and in Jadavpur University. Saira has worked with us before to expose the BJP-TMC’s drama over NRC-CAA-NPR as well. That’s why we chose her. She is the ideal candidate to take on the twin threats of BJP and TMC. ”

Another factor that makes Saira hopeful is what she says is her main rival, Trinamool Congress candidate Babul Supriyo’s ‘zero credibility’. “Only three months ago he was abusing Mamata Banerjee all day and night. Everybody knows what happened in Asansol under his watch. Today he is a TMC leader wearing a skull cap, after the elections he may go back to the BJP. His credibility is zero. I trust the people of Ballygunge [to know that] my rival is an unacceptable candidate. They are sensible and intelligent. They will vote for me,” Saira says.

Also read: Is This the End of the Road for the CPI(M) in Bengal?

Though TMC’s support base is sizeable in the Ballygunge area, the choice of Babul Supriyo has irked many Mamata Banerjee sympathisers.

“The choice of Babul Supriyo as TMC candidate is an insult to the people’s mandate in the last state elections. It shows the the ruling party does not care about voters’ sentiments. It also proves their arrogance; as they often say, even a lamp post will win on TMC ticket,” said an academic from Kolkata, requesting anonymity.

After the TMC’s landslide victory in the assembly polls last year, in which Supriyo lost from Tollygunge on a Bharatiya Janata Party ticket by over 50,000 votes, he had called Mamata Banerjee a “cruel lady” and accused the people of Bengal of making a historic mistake.

Months after that, he was removed from the Narendra Modi cabinet and announced that he was quitting politics. “Am not going to any other party – TMC, Congress, CPIM, nowhere. I am confirming that nobody has called me. I am going nowhere. I am a one-team player!… Have been with only one party – BJP West Bengal. That’s it!! Leaving,” he wrote on Facebook.

He then joined TMC.

That this might work in favour of Saira Shah Halim is evident from CPI(ML) general secretary Dipankar Bhattacharyya’s comments. Bhattacharyya, who had been somewhat critical of the Bengal CPI(M)’s stance in the last elections, has wholeheartedly supported Saira’s candidature, and urged people to vote for the Left.

The bypoll for Ballygunge constituency is not just to fill the vacancy created by the death of long-standing local MLA Subrata Mukherjee. It is to assert the dignity of every voter who voted against the BJP in the Assembly poll. Don't let TMC insult the May '21 mandate. #VoteLeft

When asked about her priorities for the constituency, she lists generating employment opportunities and sending school drop-outs back to school. “As I am visiting houses, I see many families where the sole bread earner has lost his job in the pandemic and children have stopped going to school. I want to address these issues. Besides, there are slums in my constituency where drinking water is a problem. Ward number 60, which covers areas of Park Circus and Beniapukur, has stretches of bad roads. I have identified these issues as well,” she told The Wire.

Beyond this by-poll, however, what concerns Saira most as a resident of Kolkata coming from what she calls a ‘liberal Muslim family’, is the deep communalisation of the political space.

“Majoritarian politics is ruining Indian’s social fabric. The 2021 elections in Bengal too were held completely on communal lines. That is why the BJP managed to make advances. And constant utilisation of minority communities to fulfil political goals is a strategy fraught with risks. And today the kind of violence we are seeing in Bengal is a result of that, directly or indirectly,” Saira says, referring to the killings at Rampurhat in Birbhum district.

“This is particularly disturbing for me as I have grown up in an extremely liberal atmosphere in Army barracks all over the country. I went to St Mary’s, Allahabad for a few years where Muslim girls from conservative families came wearing stalkings with skirts. But I never wore them. We were taught to respect each other’s choices. There was never an issue. When I came to Kolkata after my marriage, I was made to feel welcome here by everyone. On so many occasions, I have been a judge on shows that award Durga Puja pandals. I have also celebrated Eid and Christmas in this city with everyone. Once again, there never was an issue. Now, everything is communalised and politicised, because the RSS-BJP has no other agenda,” she adds.

“Personally as well as as a Left candidate I want this to change. I want politics over real issues that affect people. That is why in my campaigns, I am not indulging in personal attacks,” she says.

Ballygunge, which goes to the polls on April 12, is an assembly constituency under the South Kolkata Lok Sabha seat. It has about 2.5 lakh voters and covers seven wards of the Kolkata Municipal Corporation. Muslim voters constitute more than 70% of the electorate in two wards and around 95% in another ward.