The Inevitable Saffronisation of the Bhopal Elections Is in Full Swing

While Digvijaya Singh appears to have the upper hand and the backing of several religious leaders, BJP's Pragya Singh Thakur and her supporters are literally painting the city saffron.

Sadhus offer ritual for the victory of Congress candidate Digvijaya Singh in Bhopal on May 7, 2019. Credit: PTI

It’s a day before polling and Bhopal is a sea of saffron.

Its almost all Digvijaya Singh’s doing. There have been yagnas and havans, hath yog kriya and sadhu road shows in the past week and it would seem that Digvijaya, a former Madhya Pradesh Congress chief minister and a declared pariah by the BJP, is aiming to become the new “Hindu Hriday Samrat” of the state. 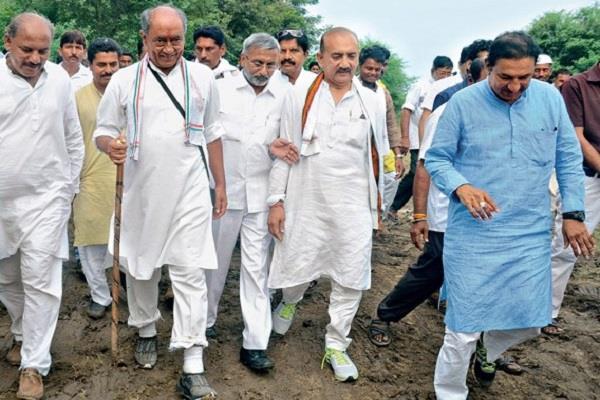 “The fight is between someone who has done ‘jail yatra’ and someone who has done Narmada Yatra. I am with the Naramada Yatri,” godman Namdeo Das Tyagi, better known as Computer Baba, declared after wrapping up an elaborate Hath Yoga yagna in the Madhya Pradesh capital.

Another Sadhu has done a chilli havan with 5,000 kgs of chilli powder to ward off any evil eyes on Digvijaya. Swami Agnivesh added his dash of saffronised Arya Samaj by taking a pad yatra in the city in support of the Congress leader.

Swami Swaroopanand, the shakaracharya of Dwarka and Badrinath peeths who is the guru of the former CM, has already endorsed his candidature by blessing him and denouncing Pragya Singh as a fraud who “writes Singh in her name while claiming to be a sadhvi”. Interestingly Computer Baba was less than a year ago a cabinet minister rank holder in Shivraj Singh Chouhan’s government. He had resigned after being piqued about something. Swami Agnivesh had actually visited Pragya Singh in jail in 2013 and campaigned for her bail on the grounds of her cancer.

The change of heart may also be due to the persuasion of the Congress candidate’s wife Amrita Singh, who has been putting her media background to good use. She has collected a team of dedicated youngsters who handle every social media platform and work on getting feedback.

The saffronisation of the elections in Bhopal was bound to happen. Digvijaya had to disprove the anti-Hindu image that had been built assiduously by the BJP.

Pragya has no other agenda.

At 10.30 am, a cavalcade of a few cars and bikes lie ready at her Rivera Town residence. The house, originally allotted to only MLAs, is now priced upward of Rs 2 crore. The one which Pragya occupies is decorated to resemble a temple. She has two female attendants who wear saffron. Most men in her immediate circle wear saffron kurtas and head scarves.

She fixes her elaborate pagri as she comes out of her room and heads for a motorcycle. A few policemen ride close to her as her troops move through the by-lanes of Bhopal.

One can’t say if this is violation of any election code – and the CEC definitely won’t – the entire Pragya troop shout only “Jai Shri Ram” and wave saffron flags. There is no election-related sloganeering. The caravan stops at a basti and few women touch her feet. She tickles an infant amidst the flash of cameras and then tells everyone how she was tortured in jail. How she wasn’t allowed to sleep or eat on time. Without naming Mumbai Anti-Terror Squad (ATS) chief Hemant Karkare or anyone else anymore, she relates how she was physically assaulted. Women make suitable noises in sympathy.

That’s all the electioneering there is on display: Pragya alleges she was tortured and was implicated in the Malegaon blast case at the behest of Digvijaya, whom she says she is going to slay in the elections to get even.

The rest is all “Jai Shri Ram” and “Bharat Mata ki jai”. BJP candidate from Bhopal Pragya Singh Thakur at the Lord Parshuram temple in Bhopal on May 7, 2019. Credit: PTI

Back at Digvijay’s camp, he is preparing to go and attend a karamchari sangha meeting near the mantralaya which he once ruled from his fifth floor office. There is a feeling amongst Bhopalis that Digvijaya is not very liked by the sarakari karamcharis for his decisions taken as CM.

“You all understand that as MP, I will be your representative. If there is still something in your mind that you think I should apologise for, then I offer my apologies once again, “ he says. Before coming to the ministry, he had flagged off a procession by Computer Baba in the old city. Computer Baba was recently issued a showcause notice by the Election Commission and he has been asked to explain his recent expenditures. Baba has flatly denied that Digvijaya was at any of his meetings or yagnas.

A toss of the dice

Amit Shah also recently led a road show in support of Pragya Singh and intermittently, both Uma Bharti and Sumitra Mahajan have appeared by her side.

But interestingly, Babulal Gaur has reportedly taken ill; Alok Sanjar, the sitting MP, is aloof and the Sarangs of the old city, who hold a sizeable number of Kayastha votes, have allegedly been secretly meeting Digvijaya. In fact, word has it that no senior BJP leader in the state capital truly wants Pragya Singh to sit on the same bench as them.

Watch | Is Bhopal Turning Into a New Hindutva Laboratory?

Kamal Nath has said that Digvijaya’s vote count starts at 3.5 lakh and then will go on from there as it cuts a swathe through Brahmins, Kayasthas and outer villages. It is a reference to the 3.5 lakh Muslim votes, 2.5 lakh Kayastha votes and two lakh Brahmin votes that are up for grabs.

There are some who have suggested that Congress leader Suresh Pachauri might not be too happy if Digvijay wins, but there is very little real damage he can do even if it were true. He lost to Uma Bharti by a margin of nearly two lakh votes in the last election that Sanjar, a Kayastha, won with a margin of 3.25 lakh votes.

If Digvijaya loses it will be only be because despite his best efforts, he could not fill this great chasm that divides the city that has helped the BJP hold on to it for nearly 30 years.